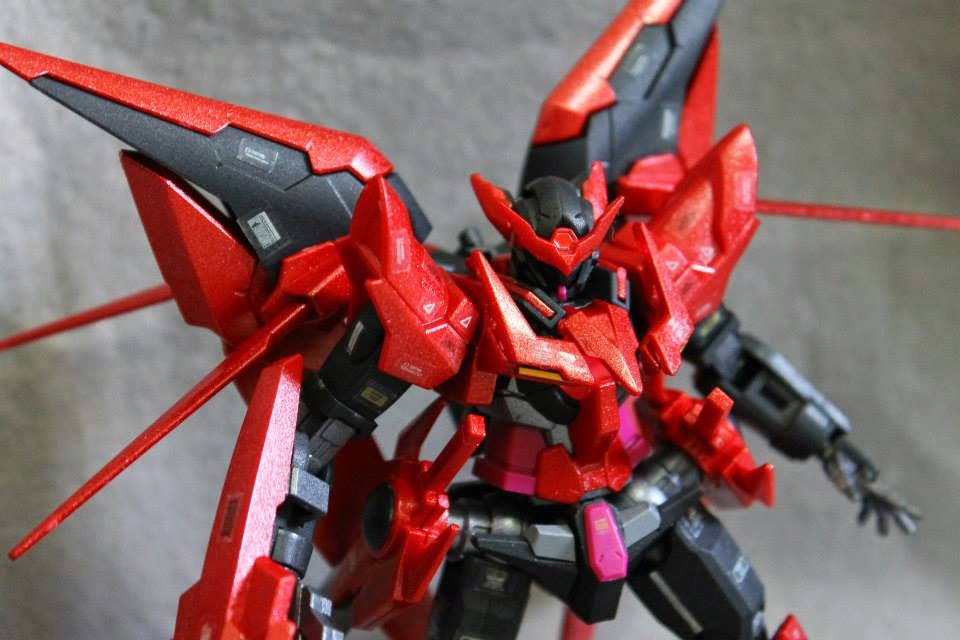 I completed this kit while waiting for the paint to fully dry on the MG 1/100 Nu Gundam, thought that I could give one of my two Exia Dark Matter kits a quick spin before embarking on the MG project. When I first opened the box, I was a little turned off by the stock red. To me, it wasn't really red, more maroonish than anything. That was when I decided to completely repaint the kit before construction. 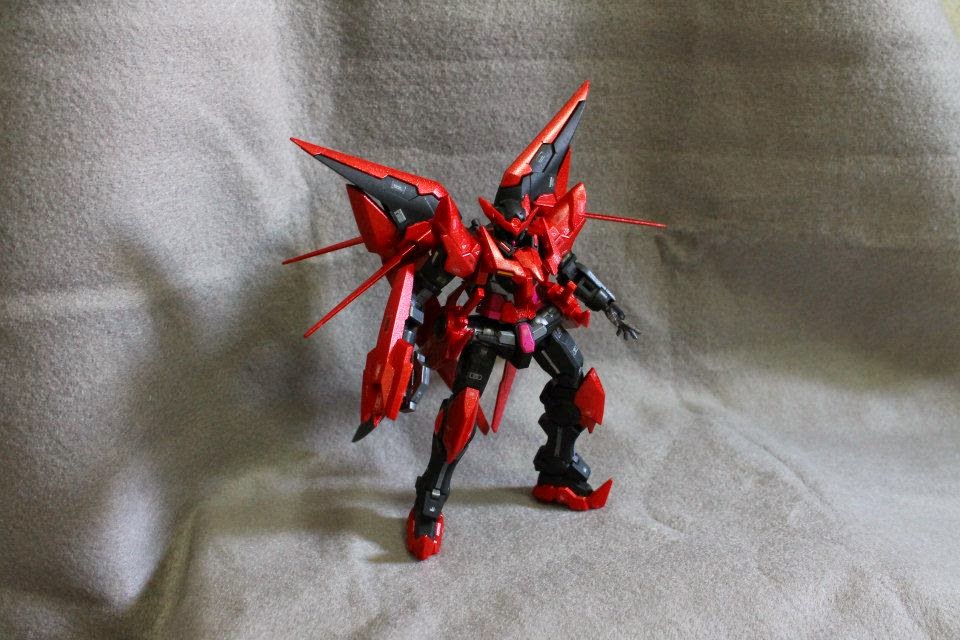 The Exia Dark Matter (henceforth referred to as DM for clarity) builds on an existing mold, i.e. the Gundam Exia's runner set as evidenced from the leftover chest pieces and half of the original Exia's GN Shield. The key differences lie in the DM's weaponry: the blade of the GN Sword has become the Brinicle Sword, the rifle portion of the GN Sword has become the Dark Matter Rifle and the original Exia's beam sabers have been replaced with internalised ones in the GN Vulcans as well as in the form of the Prominence Sword.

That being said, the DM still retains the Seven Sword System of its predecessor: Brinicle Sword, Prominence Sword, two GN Beam Sabers (generated from GN Vulcans), two Dark Matter Blades as well as the GN Beam Saber generated from the Dark Matter Rifle that is capable of effortlessly cutting through the Rifle Discharge Mode of the Star Build Strike. 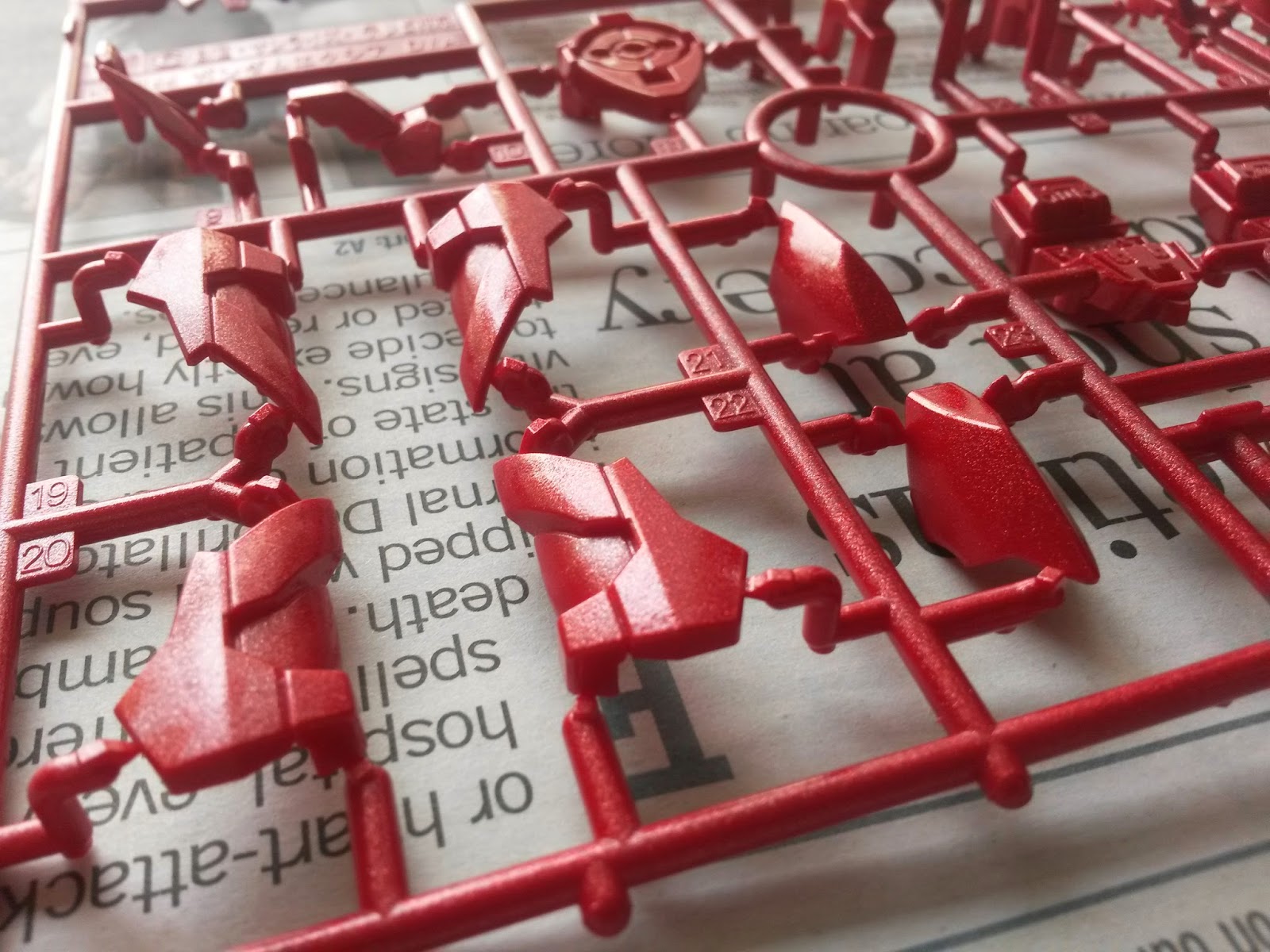 I did things a little differently for this build of the DM. Instead of using Tamiya spray paint, I made use of a more industrial alternative. I first used RJ London Acrylic Epoxy spray paint to colour my Nerf blasters and replica weapons, as they are more cost-effective but produced a much thicker coat. I didn't really want to splash excessive Tamiya paint on the DM, so I used this colour called CTM Yamaha Red instead. The end result was better than expected, it gave the plastic a beautiful, metallic finish, complete with reflective silvery bits set into the sea of red. 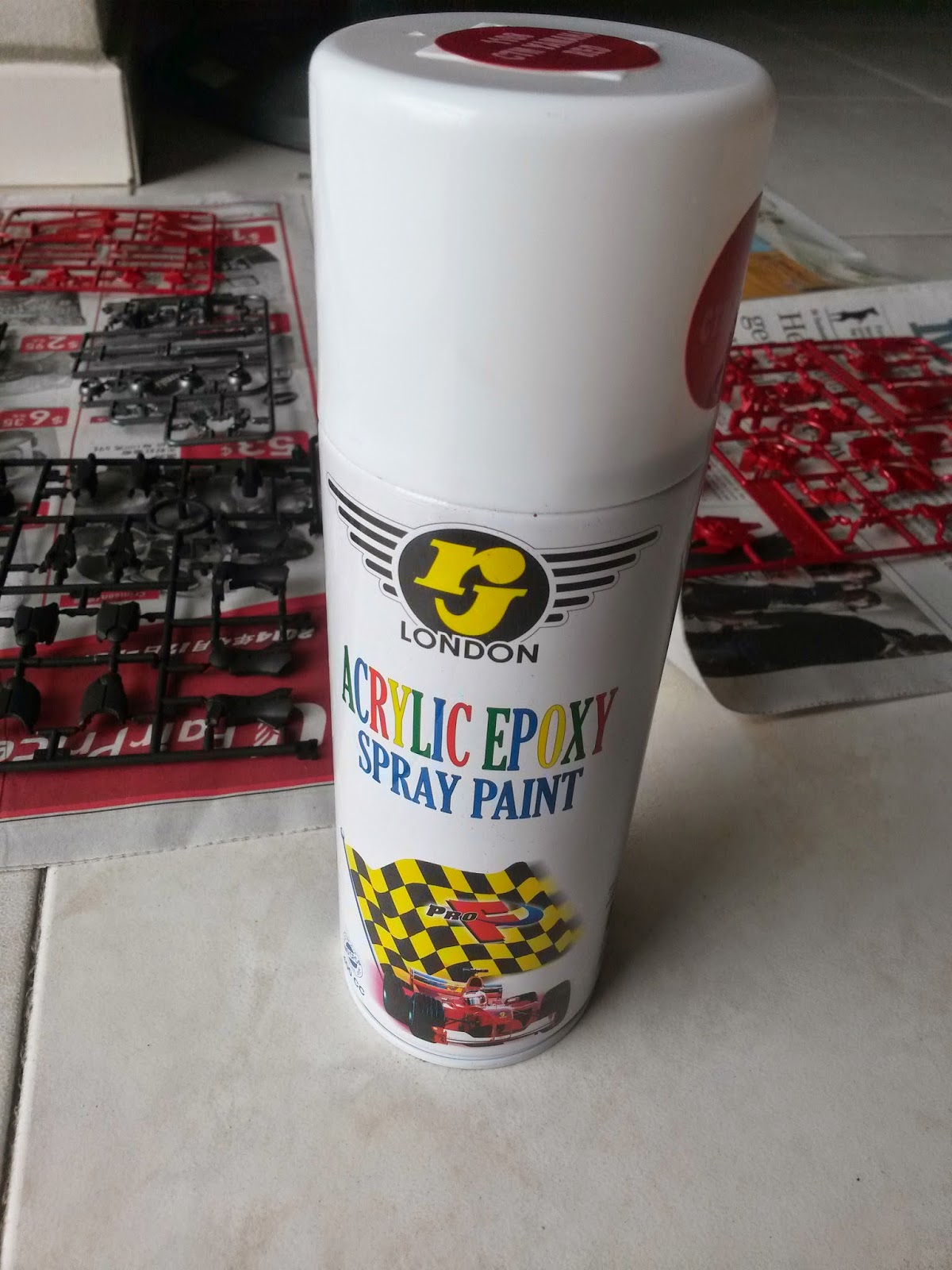 For the black parts, I went with RJ London Dull Black. More tactical black as I call it, this particular colour resembles primer, dries quickly and produces a matte finish on plastic. After application, the black of the DM looks more black, more befitting of its role in the anime.

To round up the repaints, the grey parts were sprayed Tamiya Gun Metal for that metallic luster. 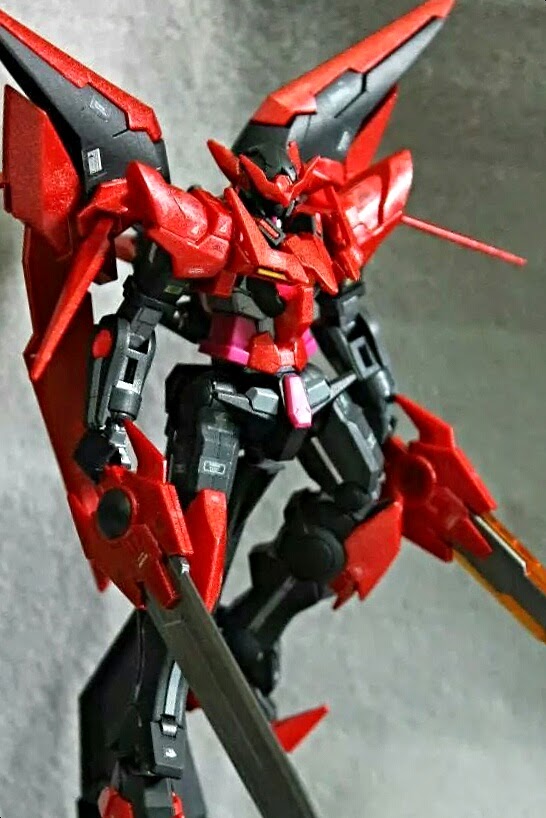 The detail on this kit don't vary much from the original Exia, although the sticker set is slightly different. Clear pink parts are provided for the GN Condensers near the elbows, knees and chest piece. The head itself is pretty nifty, featuring a cross between the heads of the Exia and the Astraea (rabbit ears).

The Dark Matter Booster is exactly the same as the ones sold separately. A tip: if you have trouble applying the eye sticker for the Booster, cut it in half and apply them individually. No one can tell the difference. 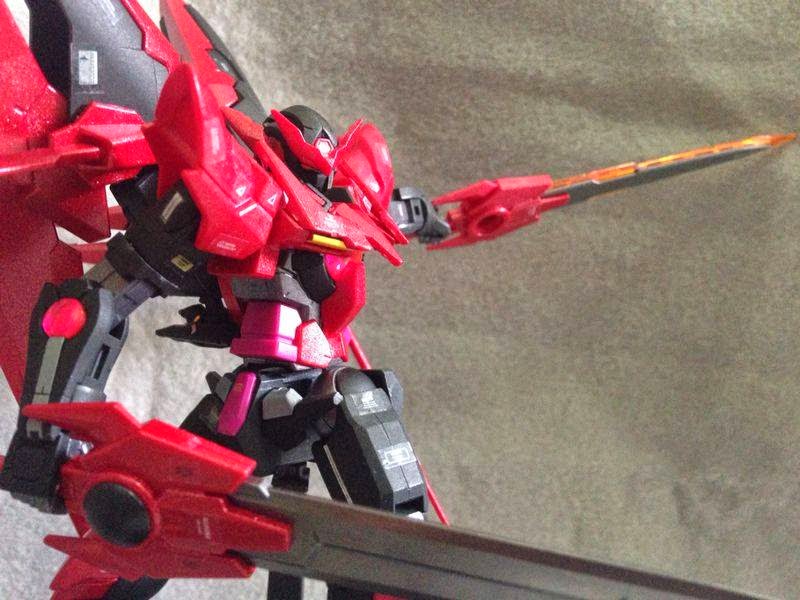 As mentioned earlier, RJ London coats wind up thicker than Tamiya ones, and this affects fitment and mobility to a certain degree. In particular, the shoulder plates that hold the arms became very stiff due to the thick coats of paint. Although this means that the DM is able to hold poses better, getting it into a kickass pose has becoming a little more challenging. 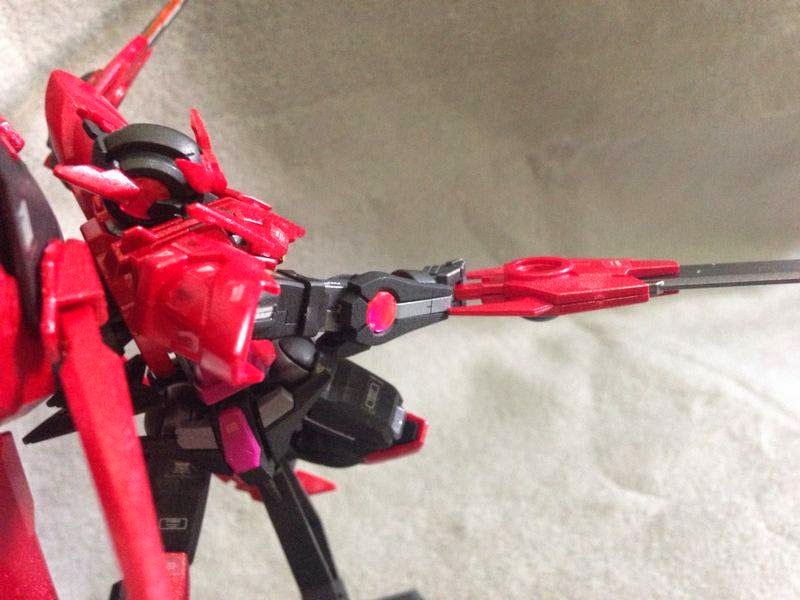 Other than that, articulation is similar to the original Exia's, being able to execute a variety of melee-oriented poses, which look great especially with its swords. 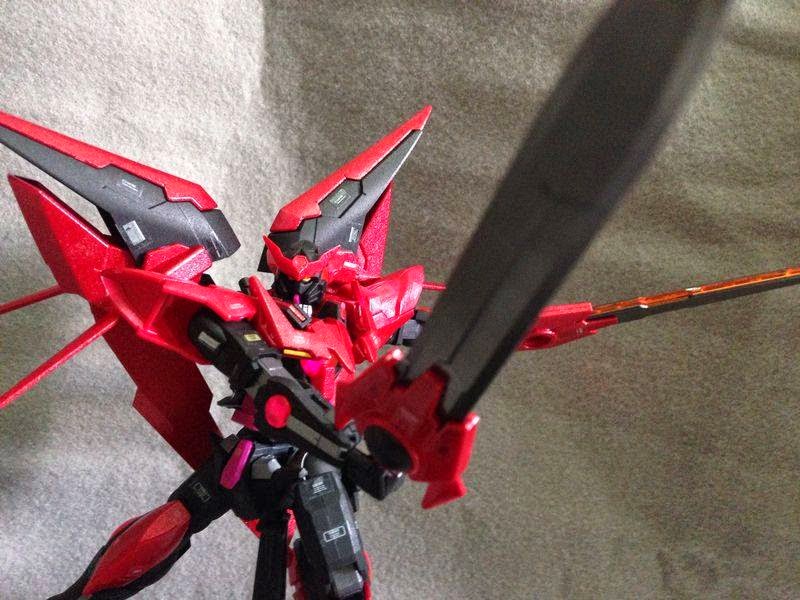 Right off the cuff, the Brinicle and Prominence Swords look great. They really serve to convey the evil of the DM, whether they are stowed away by the sides of the DM or wielded in the specially molded "stabbing" hands. I took the liberty of metalizing both swords, giving them that bit of metallic shine.

The beam saber blades supplied with the DM kit are the usual HG 1/144 GN Beam Saber blades, which are too small and short to do the anime version justice. A modified MG one is in the works, will share it here once I get it done. 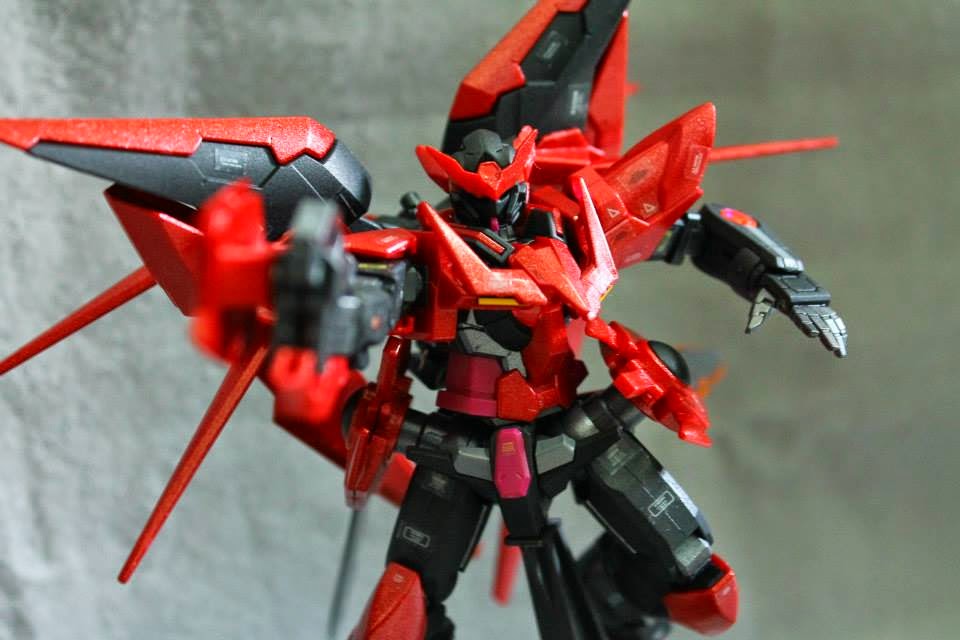 A deployed GN drive is also provided with the kit if you wish to recreate the scene where the DM faces off against the Star Build Strike after the Dark Matter Booster is wrecked. In addition, two face plates are provided, one traditional Gundam Head and the other in the Shredder-ish mouthguard-version seen in the anime (as below). 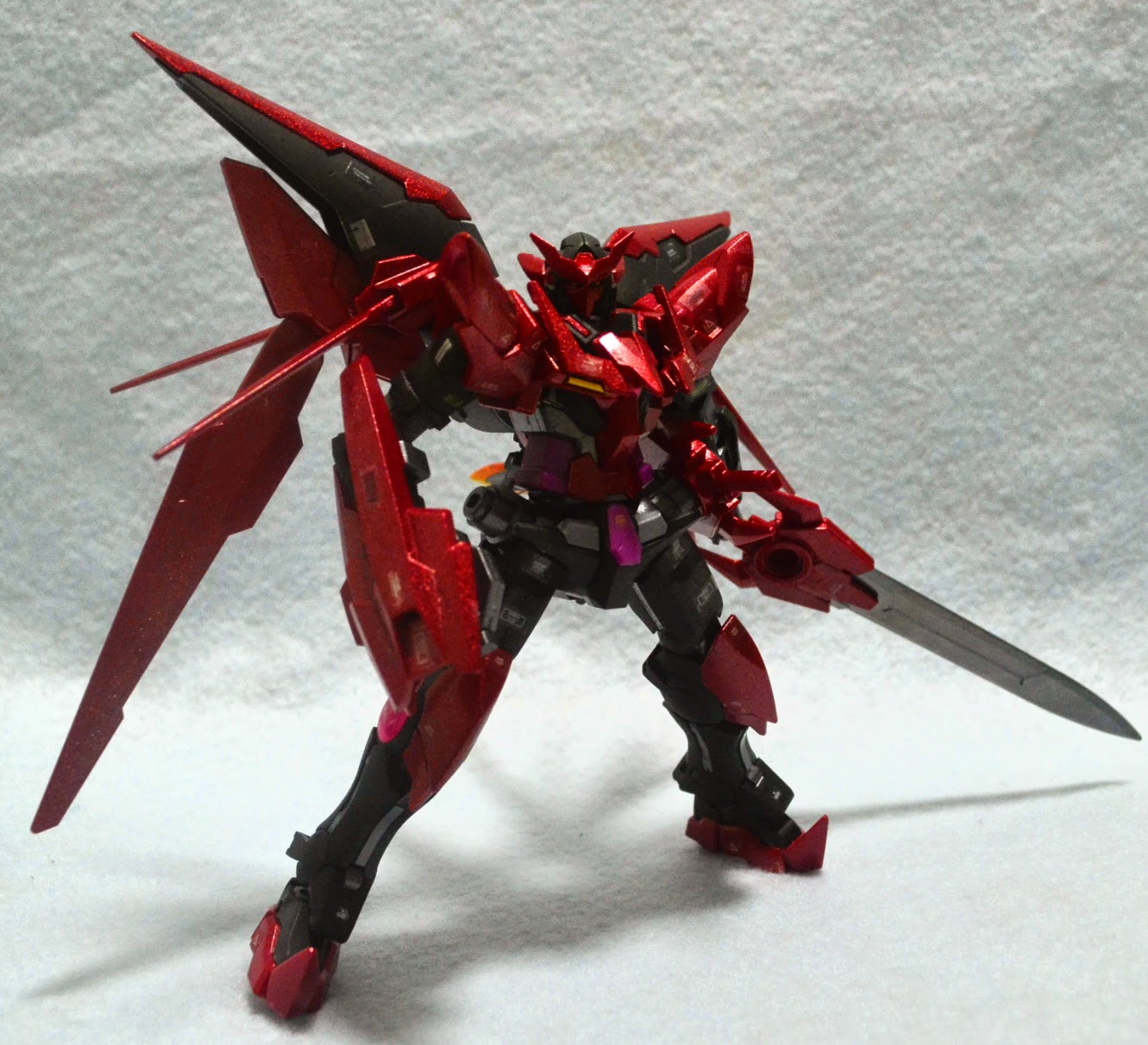 A sweet-looking kit, the Gundam Exia Dark Matter is a notable addition to an Exia collection. 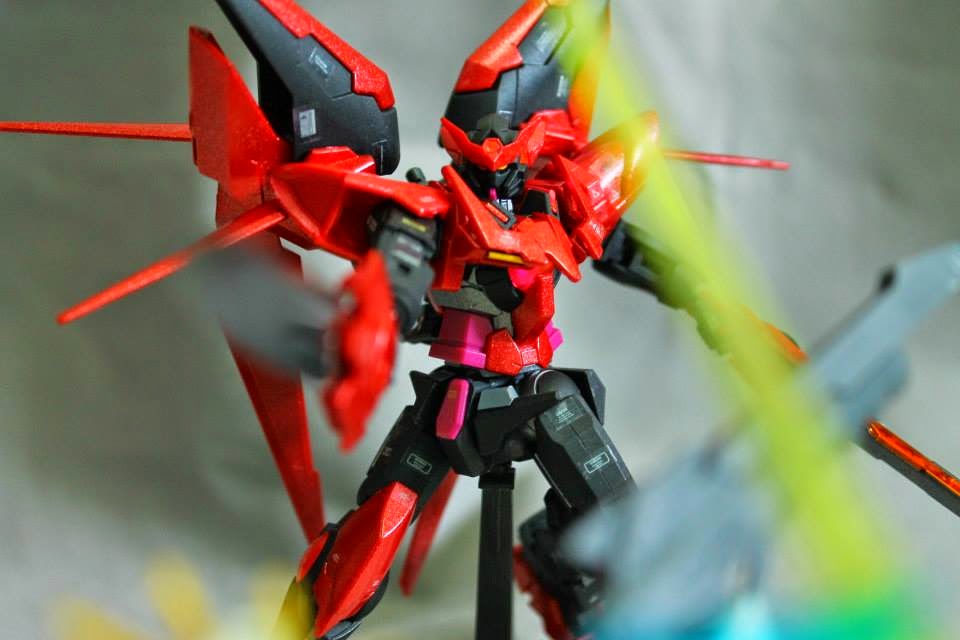 Posted by Gunplanerd at 7:59 PM