The annual Gunpla Expo in Singapore has been in full swing for 13 days since 1 June 2016, and will continue for another 13 days before bidding our little island a fond adieu. Despite the Expo being the flagship Gunpla event for the community each year, this time it feels a little different.

It feels a little… empty.


Indeed, if one were to head down to the Expo on the weekend, you would see a sad stream of humans lazily milling around the exhibits, instead of the sea of humanity that is expected to be in attendance. Although there are stage activities, Gundam cosplay and Gundam Image Girls to spice things up, the event still remains ho-hum and frankly a little boring, which is really saying a lot.

On the weekdays, it is even worse: staff and crew easily outnumber the visitors/customers at any one time, despite it being the school holidays. Come on, the staff themselves have to resort to playing the Gundam Breaker 3 demos to pass the time!

Also, if there is no queue for limited edition Expo Exclusive model kits on the first day of the Expo, you know that the event is off to a slow start.

Now before you accuse me of fabricating lies and spouting nonsense, know that during the Gundam Docks in Singapore even held at this time last year, every day was jammed packed with human beings looking at the wonderful exhibits and also purchasing Gunpla by the truckload. I would know because I went to the event grounds way too often. Therefore, by juxtaposing both situations then and now, we can conclude that this year’s Gunpla Expo 2016 has put up a dismal performance.

I will attempt to explain the possible reasons for this poor showing, but do note that the opinions contained below are mine and mine alone. So if you are easily hurt by words, you can turn back now.

A possible reason would be because of the abysmal number of GBWC 2016 entries on display, no thanks to the three-week deadline that local builders have had to adhere to. Traditionally, GBWC entries would be displayed together during the Gunpla Expo to give visitors something to look at as well as also to showcase the flair and ability of our local builders.

Usually, we get about two months to work with from the time of registration to the actual submission date, which wasn’t the case this year. As a result, we only have 69 entries for 2016 as compared to the 109 entries last year, a difference of a good one third. Naturally, the one third who didn’t make it this year have zero impetus to bring/ask friends and family to head down to the Expo, simply because there is nothing for them to see.

If you harken back to Gundam Docks at Singapore, you will notice that a huge marketing campaign was done before the event. We had a newspaper feature on the local building community featuring Toymaker aka Kenny Lim, huge newspaper spreads as well as a social media blitz that permeated almost every layer of the community. Of course, the huge 1/6 models in the central square of Ngee Ann City didn’t hurt as well.

A lousy one-page ad on the kits on offer in the mainstream newspapers.

And that’s about it.

The social media blitz that was present during Docks was absent this year, with even the list of limited edition Expo Exclusives only made available on the morning of 1 June 2016. As the days progressed, we got news and notices of new promotions and/or activities at the Expo, but some of those were removed as quickly as they appeared, with corrections posted hours after. The most glaring of these errors appeared during the sales bit, which I will touch on next.

As it became evident that visitorship for Gunpla Expo 2016 was atrocious vis-a-vis the money-tree that was Gundam Docks at Singapore, the event organisers resorted to a number of drastic measures in order to drive up the numbers.

The first of which was to release all limited edition Expo Exclusive model kits at once, instead of progressively releasing them each week. That didn’t do much to drive visitorship numbers, probably only for a few days before the numbers slipped back into the red. Side note: the prices for the limited edition model kits are actually pretty decent, so it is strange that opening of the floodgates did almost nothing to generate more humans at the event.

The second, more drastic action the event organisers took was to release something called Knockout (KO) Deals. Different from the clearance stock already on 30%-45% discount identified by red labels, these KO deals feature Gunpla listed as “Gundam Loss Leader” in the Takashimaya cashier system. The first of these KO deals were released on Friday morning, featuring the MG 1/100 Unicorn (OVA Ver.) and the MG 1/100 Wing Gundam Proto Zero priced at $35 each. 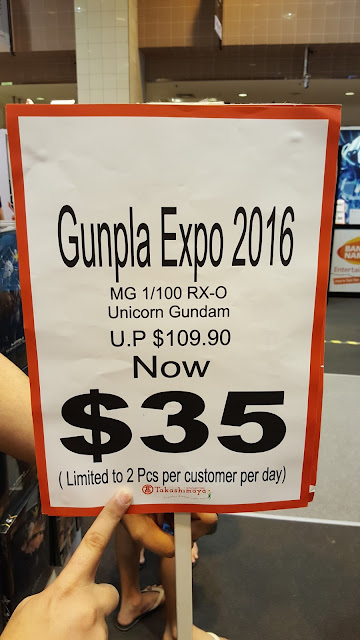 I’ll let that sink in for a bit.

Yes, full-fledged Master Grade model kits being sold at less than half its original retail price. Naturally, this triggered an avalanche of bargain hunters to the Expo, hovering around the small patch of land where the kits will be placed and stripping the cart carrying the kits bare in a matter of seconds. For example, when the Unicorns and Wings were restocked on Saturday morning, all 40 sets were swept in less than 10 seconds of their appearance. That’s how scary Singaporeans can be.

Of course, not everyone is able to get their hands on such good deals due to any number of reasons. This gives rise to “salty” people, to use the parlance of the current generation. Not satisfied with their inability to obtain a cheap model kit, these individuals have taken to social media to vent their frustration, accusing lucky buyers of being scalpers and condemning them all to hell. Some have even taken the liberty to create an alliance of sorts to combat the scalper scourge, with a whole laundry list of requirements to meet before you are granted entry into this elite fraternity. To date, I haven’t seen any of them at the KO deals, so much for the intense witch hunt.

Then, there's the issue of the $45 MG 1/100 Strike Freedom Gundam Full Burst, a widely advertised deal that came with the aforementioned KO deals. Clearly a printing error, the event organisers removed all sets of the Strike Freedom from the Expo and plastered a huge SOLD OUT sign over the on-site advertisement poster, even if we could spot the haphazardly stacked pile of abandoned model kits in their storage area.

Ultimately, the Strike Freedoms were given out as prizes for the stage activities and won't ever see the light of day as the sales item it was designated to be.

We have about 13 days to go, and the event organisers will no doubt have more KO deals as well as introduce more red label items to entice people to visit the Expo. However, excessively releasing deals will attract only one type of people to the Expo, and they are not the ones who will painstakingly go through each and every exhibit on display, pore over every GBWC 2016 entry and take photos as memories of their experience at Singapore’s annual flagship Gunpla event.

Posted by Gunplanerd at 1:48 AM