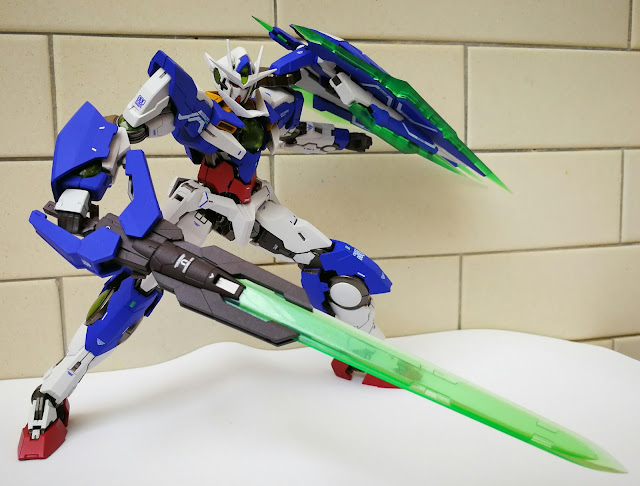 As a rather fitting conclusion to the 10th Year Anniversary of 00 Gundam, the Metal Build 00 Qan[T] was actually announced fairly early in the year but was difficult to obtain due to very limited stocks and an overly-hungry fanbase. Nevertheless, I managed to snag myself a set very close to the initial cost price!

Bandai's official version of the 00 Qan[T] is actually the third iteration of the 00 Qan[T] in the Metal Build format, after FanMade's 1/100 Turris Babel and MoShow's 1/100 WT-000 (so named to avoid copyright lawsuits). While these take design references from the MG 1/100 00 Qan[T], their manufacturers took certain liberties when enhancing the stock armour and details, leading to a hyper-stylised and edgey design for both. True to third party releases, both non-official 00 Qan[T]s were equipped with the GN Sword IV to create the Full Saber variant. Hell, the Turris Babel even came with a Confrontation Sword. Some time in the not so distant future, Bandai will definitely release the GN Sword IV as a P-Bandai Option Set for the 00 Qan[T] just like the GN Sword II/Blaster.

The Qan[T] comes in a standard Metal Build box, similar in design and style to its other 00 Gundam cousins like the 00 Gundam Seven Swords, 00 Raiser, Gundam Exia and Gundam Avalanche Exia. For a Metal Build, the box is rather slim, being only a tad thicker than the box of the Metal Build Gundam F91, the smallest Metal Build offering to date. Rather than cutting back on accessories and parts, it's really just a matter of more efficient packing methods on Bandai's end, reducing the amount of materials used in the figure's packing to keep the size of the box to a minimum.

The 00 Qan[T] is accurate to its anime representation, coming with the GN Sword V and GN Shield mounted over its right shoulder via a really solid die-cast backpack joint. On this note, the way the armour is structured and layered over the inner frame shows off a lot of the die-cast materials, giving the whole figure a premium feel. The weight of the 00 Qan[T] is nothing to scoff at either.

As the 00 Qan[T] incorporates the Quantum Burst gimmick, the majority of its armour is designed to come off without much effort, some more easily than others. Although not deal-breakers, the looseness in some areas can be annoying at times, especially when posing that the huge GN Sword V. Essentially a gigantic GN Condenser, the clear green material is actually speckled with glitter within, allowing the blade to catch light beautifully. This applies to all of the clear green GN Condenser parts on the 00 Qan[T].

A first for Metal Builds, the 00 Qan[T] comes with an LED-equipped GN Drive in its chest, operated via a pair of LR-44 cell batteries (not included even with the figure's exorbitant price tag). The LED isn't particularly bright but it's decent enough to showcase the glowing chest and backpack output.

All things considered, the Metal Build 00 Qan[T] is pretty decent, a well-made, well-finished figure with a good complement of accessories and display potential. 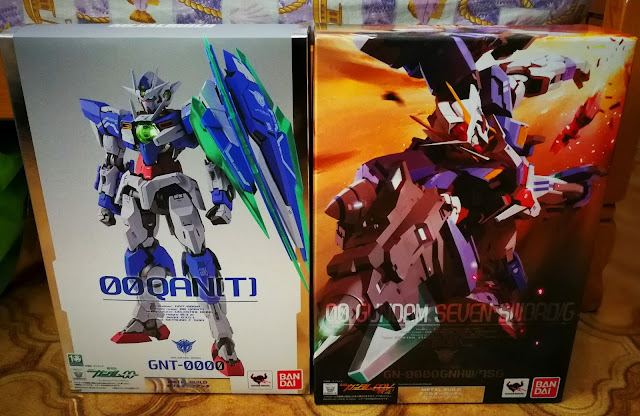 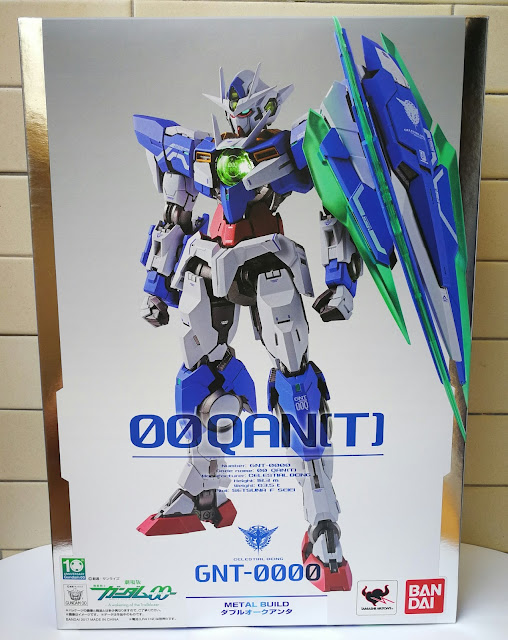 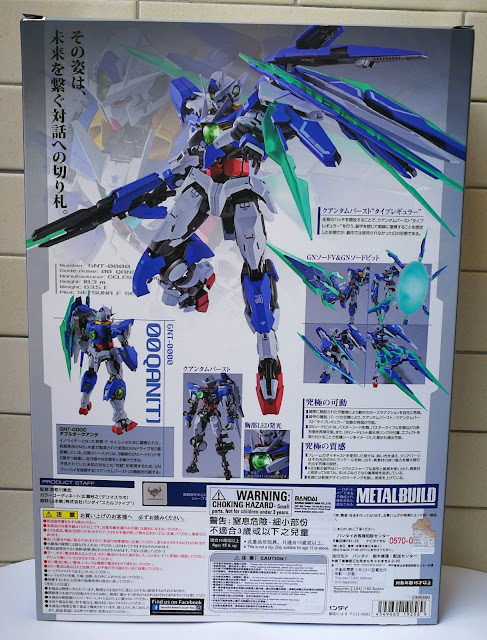 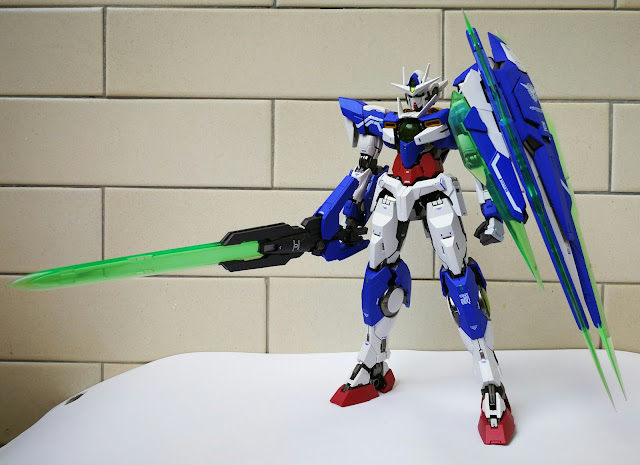 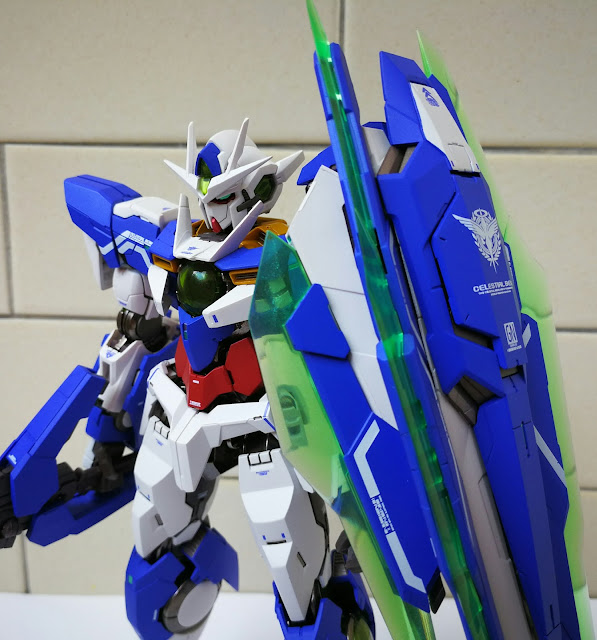 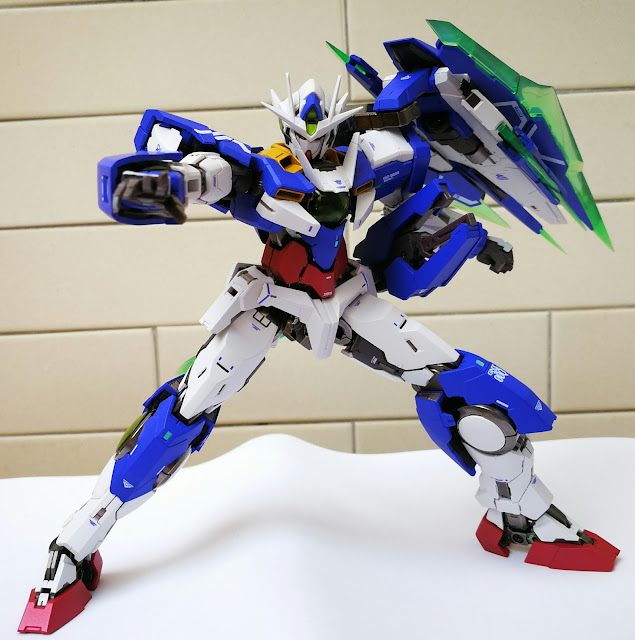 Posted by Gunplanerd at 4:35 PM