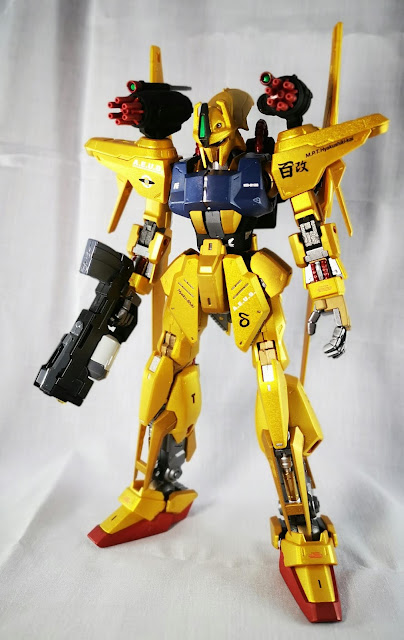 For a mass produced grunt unit, this bad boy looks badass!
The Hyaku-Shiki is a timeless, classic design that has endured through the ages, resulting in many variants and modified forms, both in official Gunpla releases as well as builder customs. Indeed, the Hyaku-Shiki is still a very popular base for competitive modelling.

Based on the high performance Hyaku-Shiki Kai, the mass production type was intended to provide the AEUG with an affordable mobile suit option for force projection. While the Nemo performed its duties adequately, elevated confrontations still necessitated the deployment of Gundam-types and other limited production mobile suits, which steadily depleted the AEUG's limited coffers. With a squadron of high performance mass production suits that could go against higher-end enemy units, the AEUG's aces could be put to more effective use.

The Hyaku-Shiki Kai Mass Production Type was essentially a stripped down version of the regular Hyaku-Shiki Kai, featuring a smaller reactor and simplified backpack. However, the mobile suit was still a force to be reckoned with, carrying over most of its predecessor's agility as well as the signature anti-beam coating which gives the mobile suit its flashy, golden sheen. While the ostentatious nature of the shiny coating ran counter to many military directives, the ornate colour served to distract enemy units, who almost always made it a point to shoot down the golden mobile suit over all others. Squad tactics were devised and subsequently implemented based on this psychological profile.

Two sub-variants exist for the Hyaku-Shiki Kai Mass Production Type: a standard version and a High Mobility version, denoted by the HM at the end of its model number. The standard version was lightly equipped with a pair of beam sabers, a single shoulder-mounted beam gatling cannon as well as a 100mm submachine gun. The High Mobility version mounted the wing binders of the original Hyaku-Shiki for increased AMBAC (Active Mass Balance Auto Control) maneuverability as well as one more beam gatling cannon on the other shoulder. HM versions were recorded blitzing enemy positions with nothing more than the beam gatling cannons, dealing phenomenal damage while sustaining nary a scratch on its shiny surface.

The 100mm submachine gun was mostly used for self-defense and anti-mobile suit combat, with the high rate of fire being able to tear through most armour plating, given enough time. This particular weapon was unique as it could switch between two different kinds of ammunition, held in different magazines mounted on the same weapon. A drum magazine loaded from the underside of the weapon carried 500 rounds of 100X450 millimeter standard bullets, while a top-loaded box magazine held 20 self-discarding sabot rounds that were effective against hardened targets such as mobile suit shields or capital shield bridges.

Build Notes
The Hyaku-Shiki Kai Mass Production Type bears the distinction of being my first fully-painted Master Grade model kit, with almost every single part painted. Only a handful of tiny parts were left stock as they wouldn't affect the look of the finished product that much. While the MG 1/100 RX-93 Nu Gundam Invoke also counts as a painted MG model kit, I only used seven colours, as compared to the Hyaku-Shiki Kai's 17:

A pair of aftermarket metal tubes were also used in lieu of the piston covers found in the shins. Although they're a tad loose, it is still acceptable and they serve to elevate the entire look of the unit. 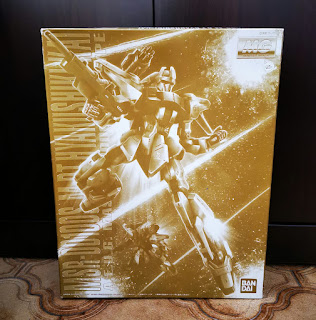 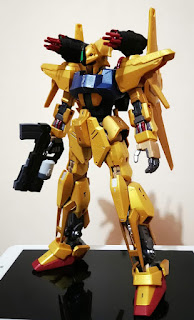 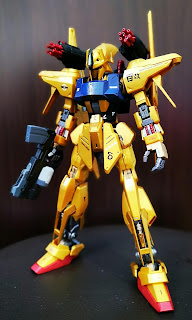 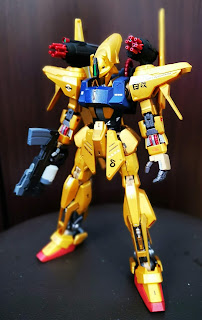 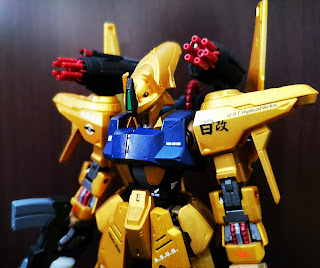 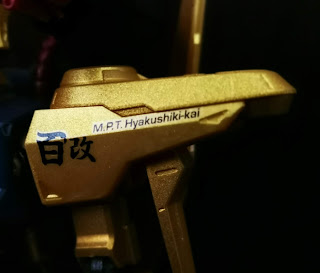 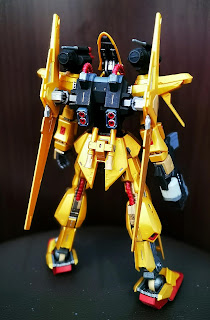 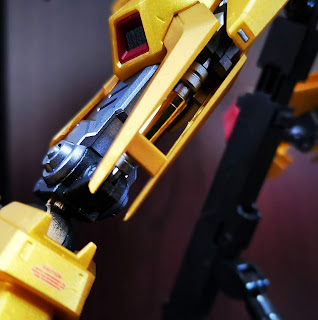 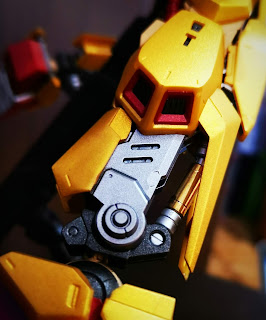 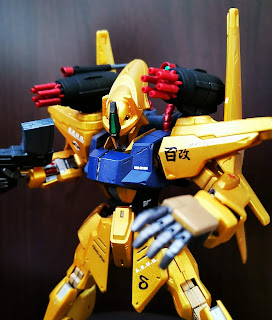 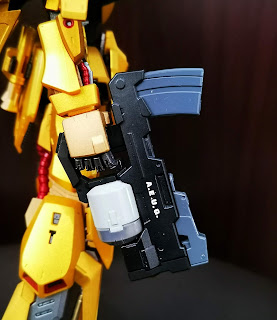 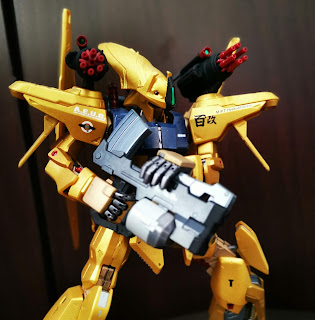 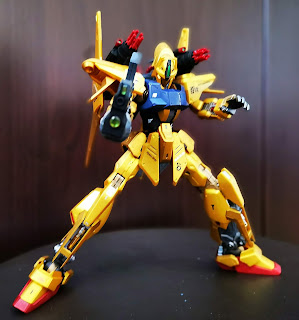 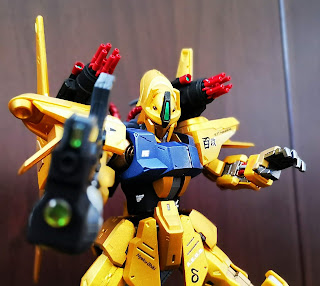 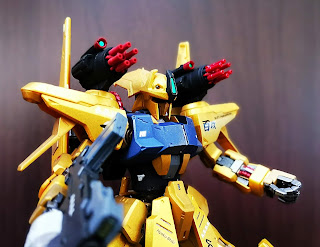 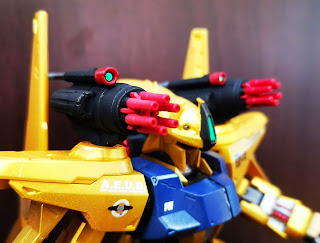 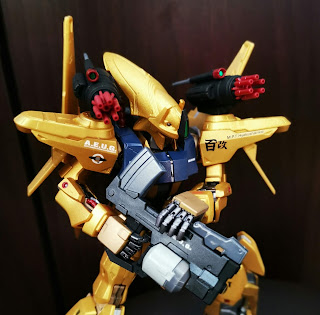 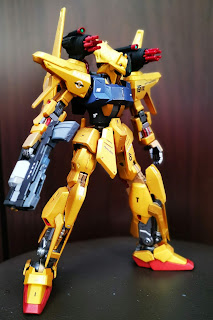 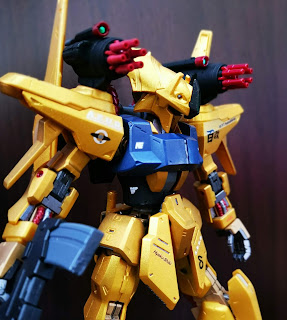 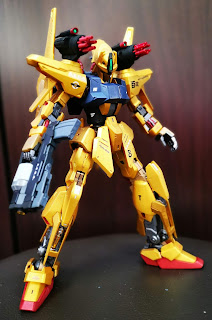 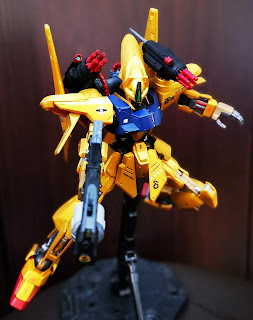 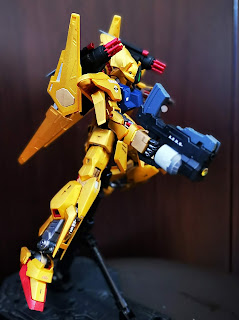 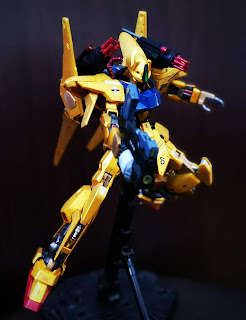 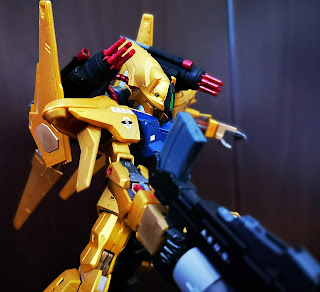 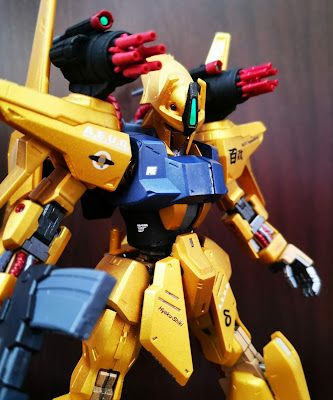