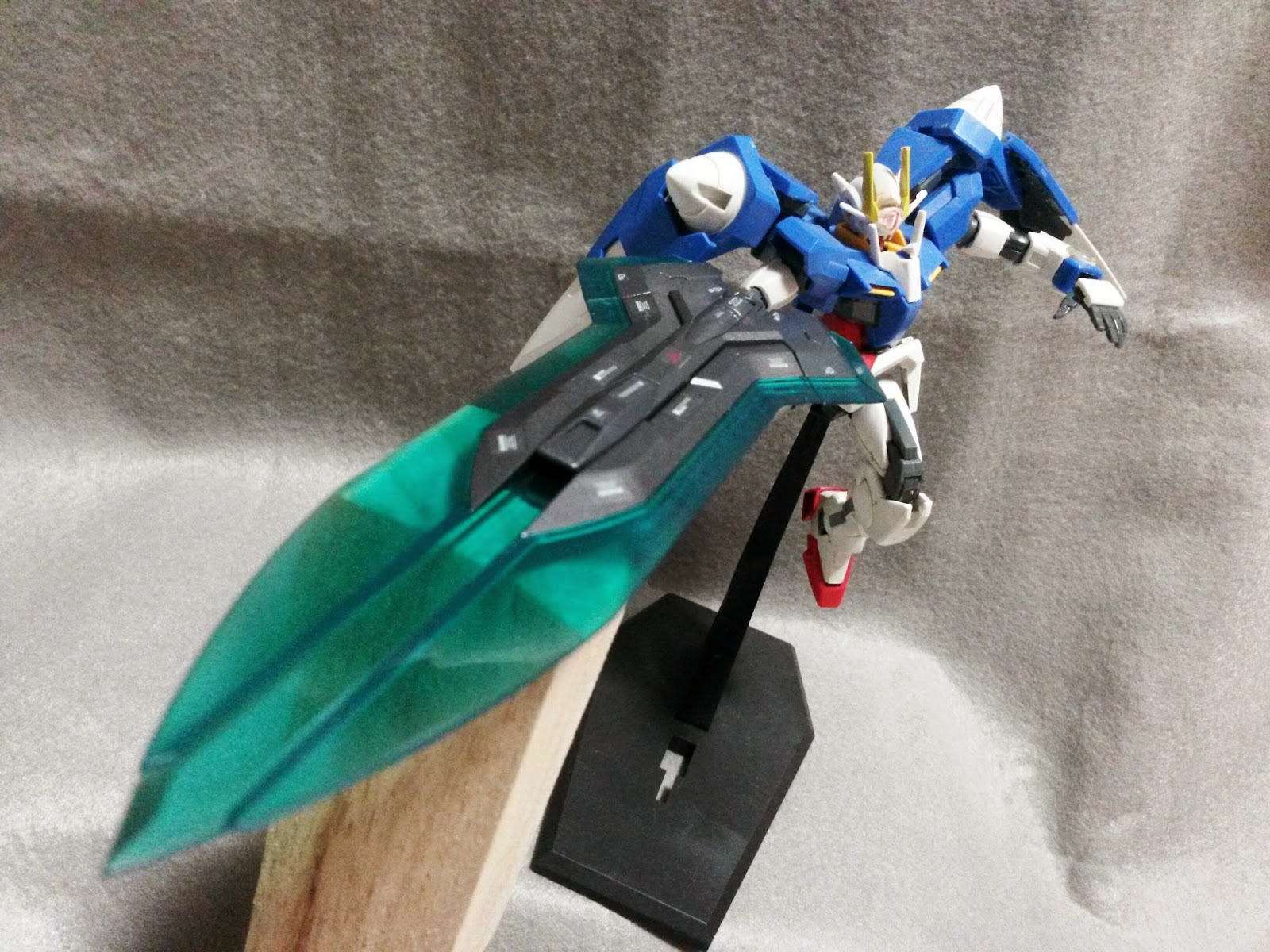 There is just something about blades and swords that appeal to me: the sharp edges, the tapered tips, the grace and style that adds to a kit which a gun can never achieve. Melee weapons also allow for more dynamic, stylish poses that push the envelope in terms of execution and flair, enabling kits to showcase their flexibility and prowess in close-range combat.

Kotobukiya weapons are, in a word, grounded. Most of them are logical developmental progressions of modern-day weaponry, such as the Type A and H beam carbines (as I call them) which look strikingly similar to the HK-416 and the AK-47. They also produce a number of swords and blades, most of which are based off feudal Japanese weaponry like the daisho and the fairly standard katana.

Then there is the Mega Slash Edge. 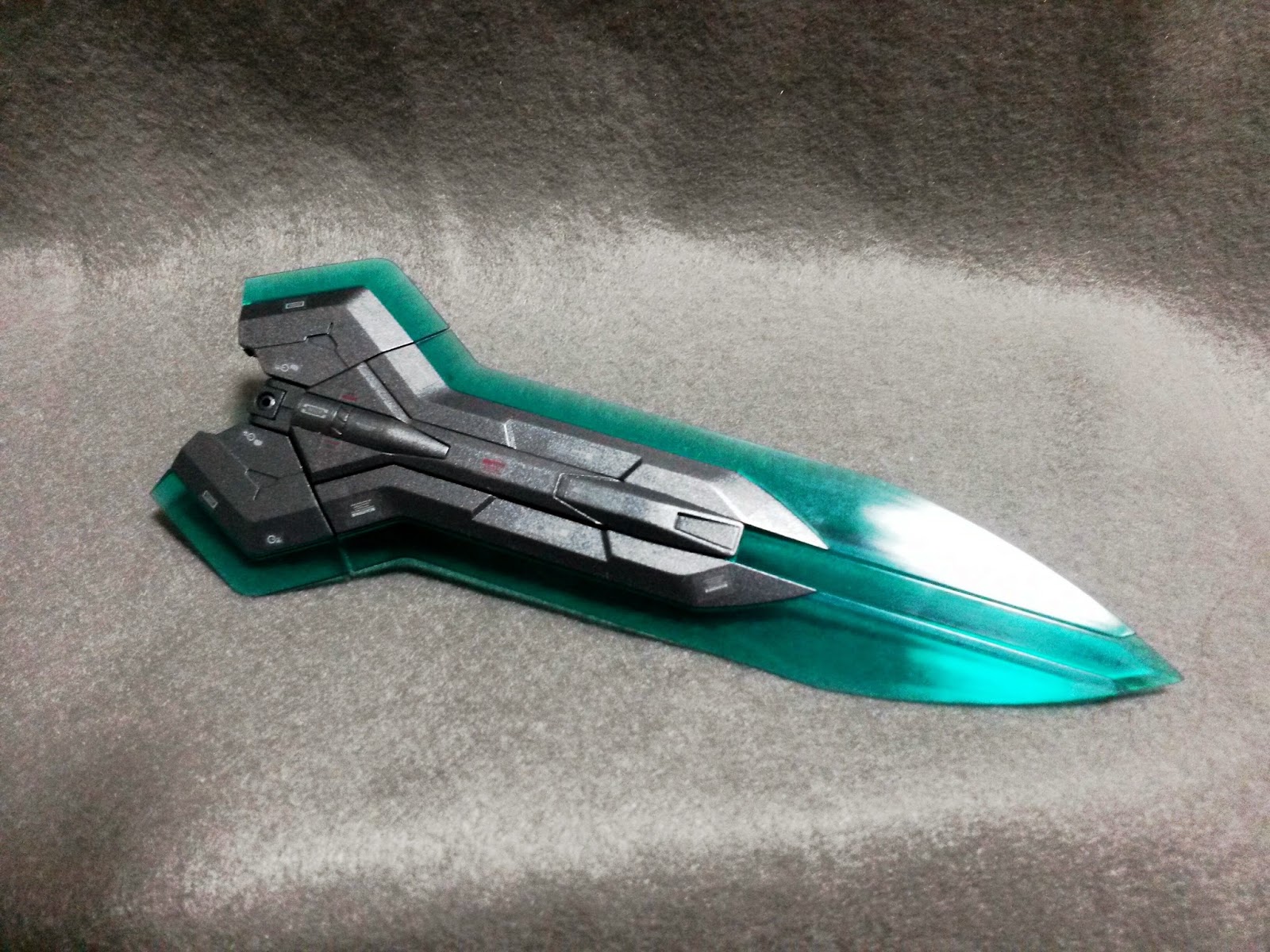 From the get-go, the Mega Slash Edge looks formidable. A reimagination of the GN Sword series of close-combat oriented weapons from the 00 Gundam animation, the Mega Slash Edge retains the pistol-grip of the original GN Sword I as well as the green GN Condensor material that is found on the GN Swords II, III, IV and V. Overtly on the packaging, it looks like a giant arm-mounted sword that will cleave through entire armies, but once you start to build it, you will realise that this is more than meets the eye. 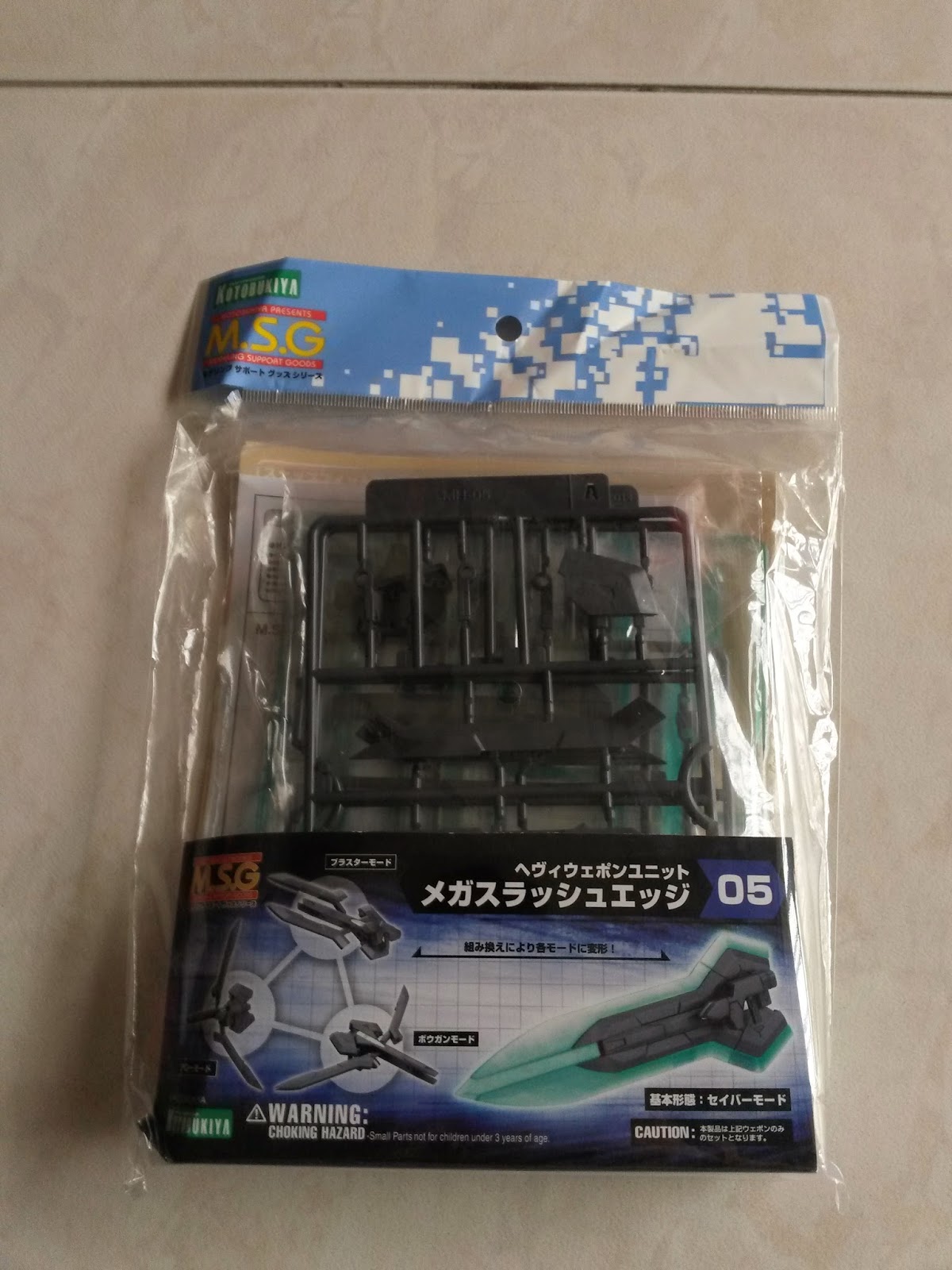 Accessories are fairly simple to build, and the Mega Slash Edge consists of three grey runners as well as a clear green one. Standard gated ABS plastic that doesn't leave very visible nubs upon nipping, and parts snap fit well without external pressure or assistance. What is impressive however, is the gating of the clear green runner. Clear plastic parts (excluding beam saber blades which are "softer") are notorious for being relatively fragile and prone to damage, as a cut too close to the component will result in stress to the part or even breakage. Therefore, caution has to be exercised when it comes to removing clear parts from their runners, as any damage will be difficult to repair. 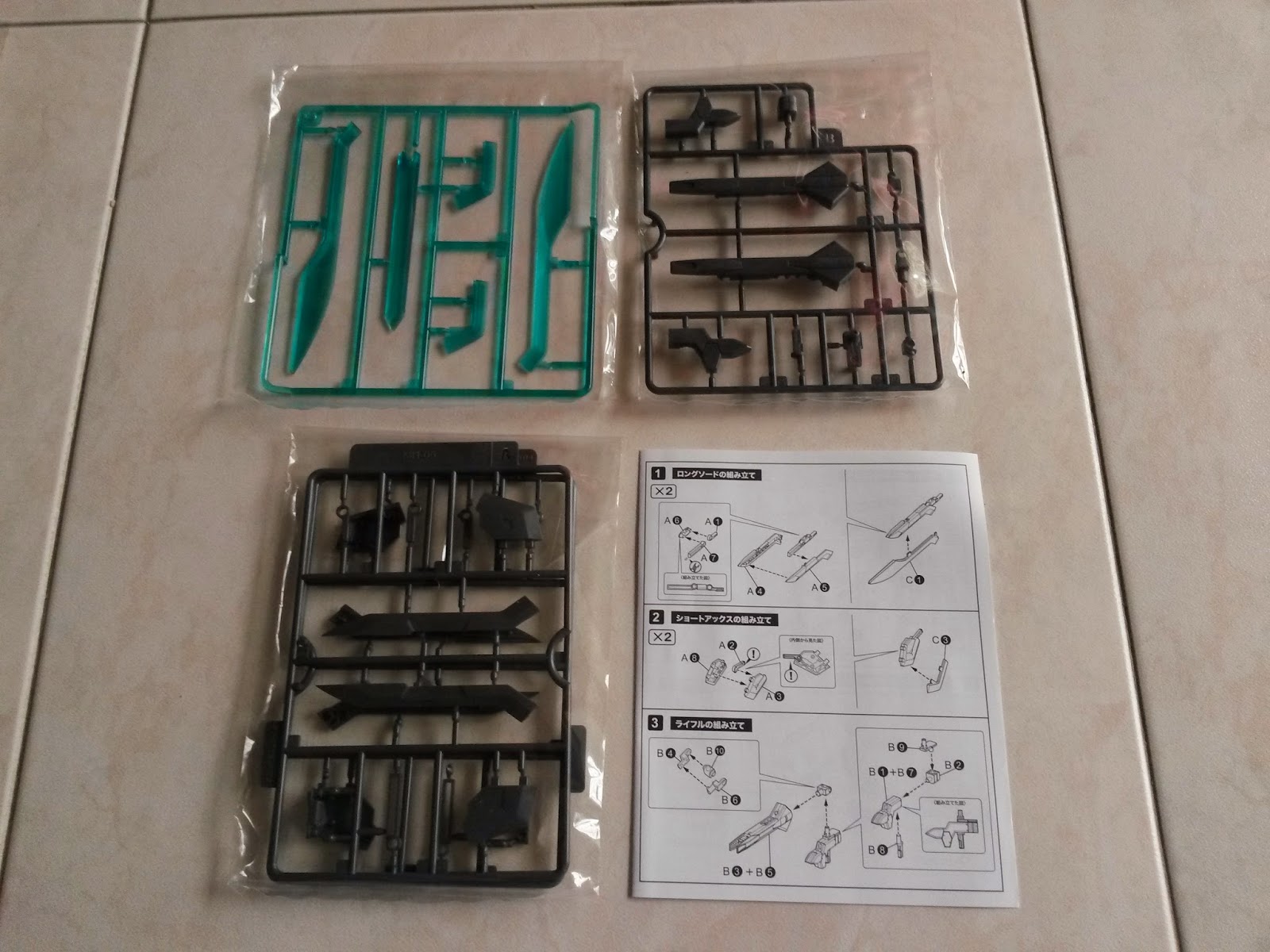 The Mega Slash Edge's clear green parts however, have no such issues. They are gated only at the least visible parts, the underside of the blade that connects to the main blade body. Therefore, no cuts are needed on the blade itself, ensuring the integrity and untarnished look of the clear parts. However, not all parts can be gated this way, the central blade is still has two sprues attached to its sides, but it shouldn't bother you too much. 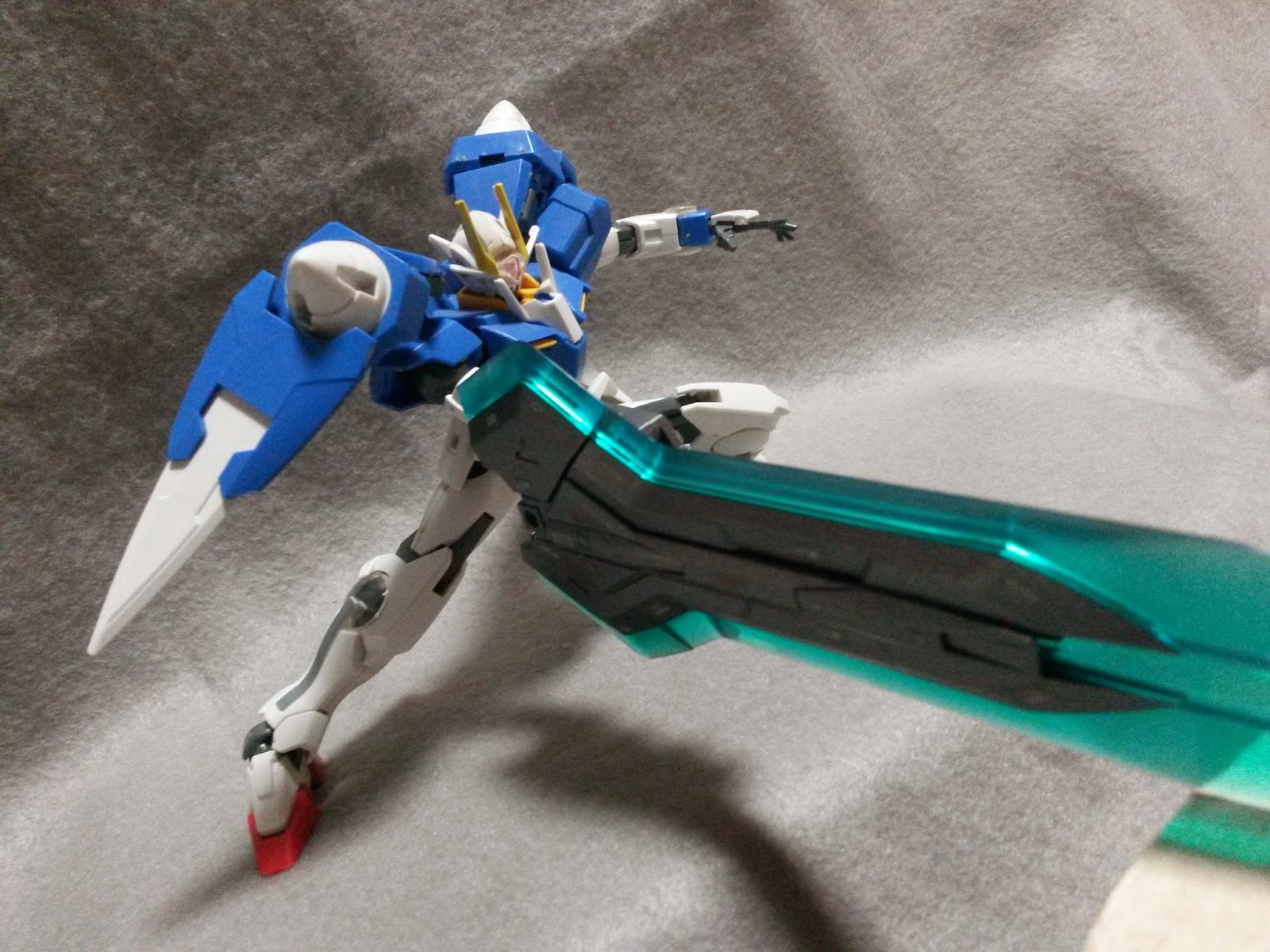 The packaging illustration shows the Mega Slash Edge being wielded by a 1/100 Frame Arms, which is the equivalent of Bandai's 1/144 scale kits. Perhaps its the angle or Photoshop wizardry, but the weapon looks no larger than the GN Sword I when mounted on the Gundam Exia.

Upon construction however, you will realise that the Mega Slash Edge is the size of the Tactical Arms used by the Astray Blue and Red Frames. Simply put, it's HUGE.

This nifty little kit comes packed with many features, as the variable shape and composition of the Mega Slash Edge allows for a number of different configurations. In its most basic form, the Mega Slash Edge is an oversized GN Sword with a weapon height matching or even exceeding certain kits. The longer, frontal blades of the weapon separate to become a pair of long swords, while the shorter, curved blades at the back come away to become a pair of katars. 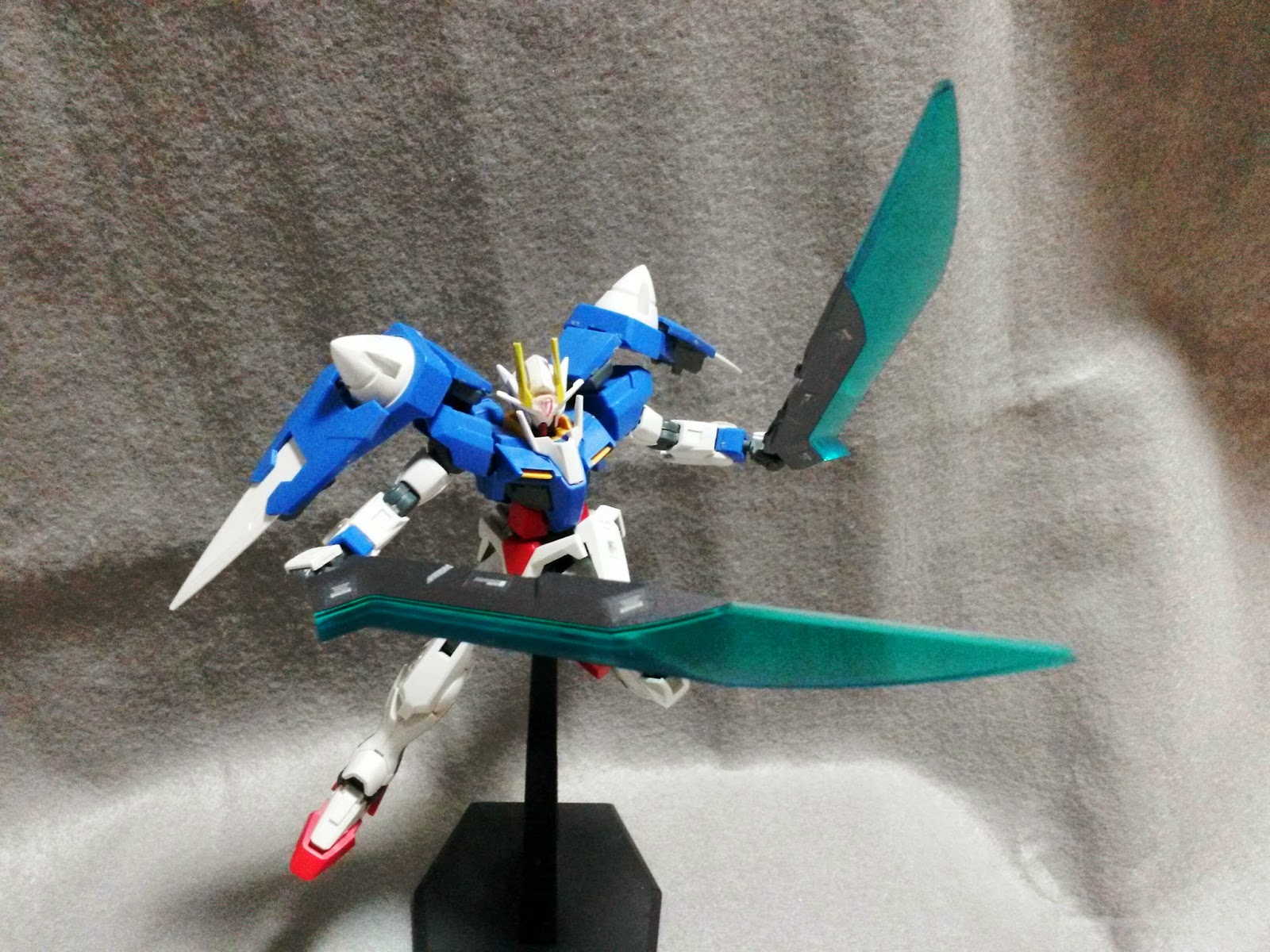 The long swords can also extend from the main body of the Mega Slash Edge to produce a "cannon" form, which I term Mega Slash Cannon, a more extravagant and awesome variation of the GN Beam Rifle. It can also turn into a lame bow-and-arrow mode, which I am loathe to do because it is so dumb. 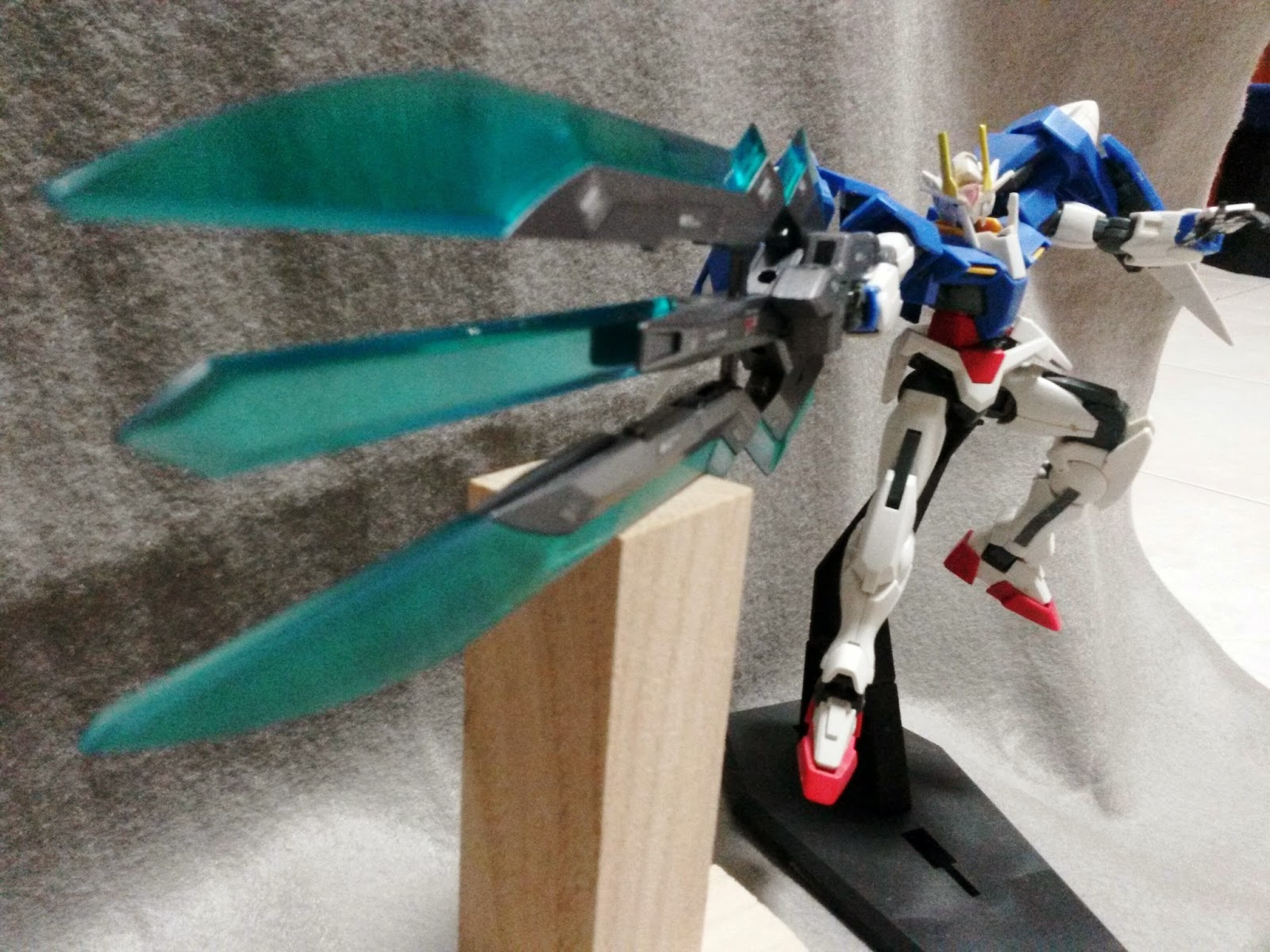 One good thing about this weapon is that it is ambidextrous, you can swing the connecting joint either to the left or right before attaching the pistol grip to allow it to be wielded with either hand. 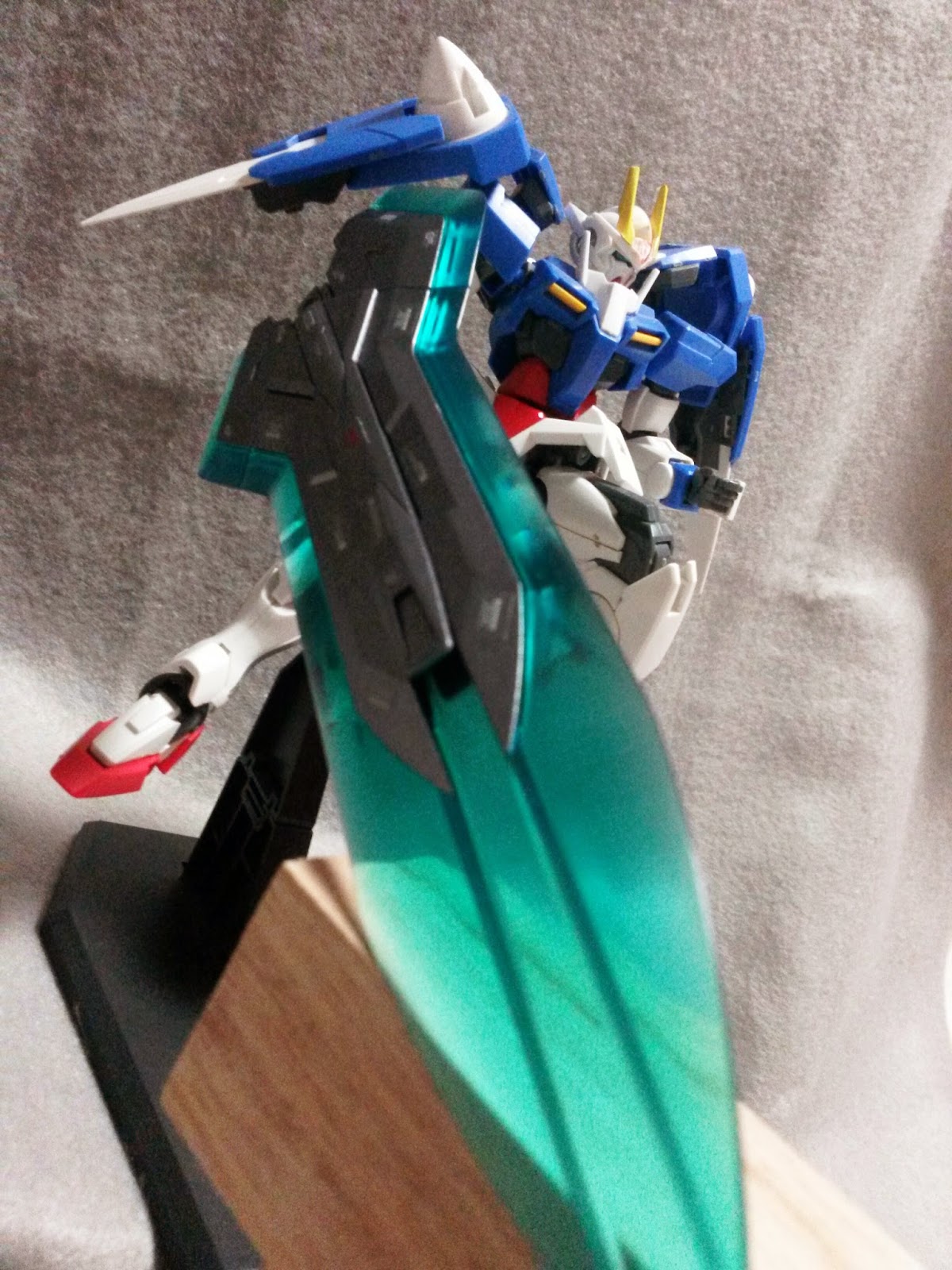 Obviously, the size is going to be a problem when posing with this thing, it is just too massive. A separate support is required for almost all poses (note the wooden block above), and be prepared to be a little frustrated when it comes to getting your hand to be positioned the way you want it.

00 Gundam hands require a little bit of filing to properly hold the weapon, but HGUC hands should have no problems. The only issues you will face will be the wrists, which cannot possibly hold up such a massive weapon for long. It also messes with the kit's balance, so assisted poses should be used here.

This accessory is actually for my upcoming RG Exia, so hopefully its wrists will be able to support this monster of a blade.

Check back in about a month's time!
Posted by Gunplanerd at 8:24 PM