As to all endings, the final episode of the surprisingly interesting Gundam anime Gundam Build Fighters is packed with action, overflowing with bittersweet emotion and of course rife with the by-now defining trait of the series. It has been a fruitful, exciting GBF journey, one filled with nostalgic surprises, jaw-dropping customisations as well as bucket loads of cameos and special appearances that give Gundam enthusiasts a field day each episode.

So it its only appropriate for me to pen down a post dedicated to episode 25.

If you haven't watched the epic finale, please do so before reading the rest of the post as there will be MAJOR SPOILERS right after the jump.

So the final battlefield has been foreshadowed in the previous episode to be none other than the ultimate arena from the original Mobile Suit Gundam: A Baoa Qu. There can not be a more fitting place for a final showdown, as this locale has been referenced, parodied and/or recreated many times in other timelines of the Gundam franchise.

This A Baoa Qu is no different: it is an updated, sleeker and meaner fortress than its ancestor from 35 years ago, and features a more modern outlook and design. But the shape is unmistakable, one look and you know that shit is about to go way south.

Casting aside the physical complications of an entire 1/144 scale A Baoa Qu materialising in the real world, our heroes set off to destroy the main Arista gem that is somehow inside the fortress. Never mind how they deduced it to be so, as long as the Early Genius says it's so, it is so. Also ignoring the fact that they could still activate their GP Bases as well as their move some of their critically damaged Gunpla (I'm looking at you Star Build Strike), all of our heroes take off towards the monolith that is at once threatening them yet is the only thing that can make their Gunpla move.

Of course it wouldn't be easy, this is not a soap opera, it's a goddamn Gundam anime! From the hangars and launch pads and catapults of the Arista A Baoa Qu, hundreds, even thousands, of standardised, greyish Gunpla with rounded edges armed with a variety of weapons set off to resist our heroes' advance. I chuckled when Ricardo said "Are they bootlegs?!" This is definitely a nod from Bandai towards the companies that have been ripping them off.

Called "Mocks" on the GBF website, these caricatures of mobile suits are the pinnacle of grunts and cannon fodder that exist in all iterations of the Gundam franchise. Most of them have red mono-eyes, others have Gundam-type sensors with a variety of V-Fins, including the inverted one of the Turn-A Gundam. Some of them also seem to be carrying weapons from the HG Customise Campaign, I spotted the MATADOR-ish bazooka on one of them. 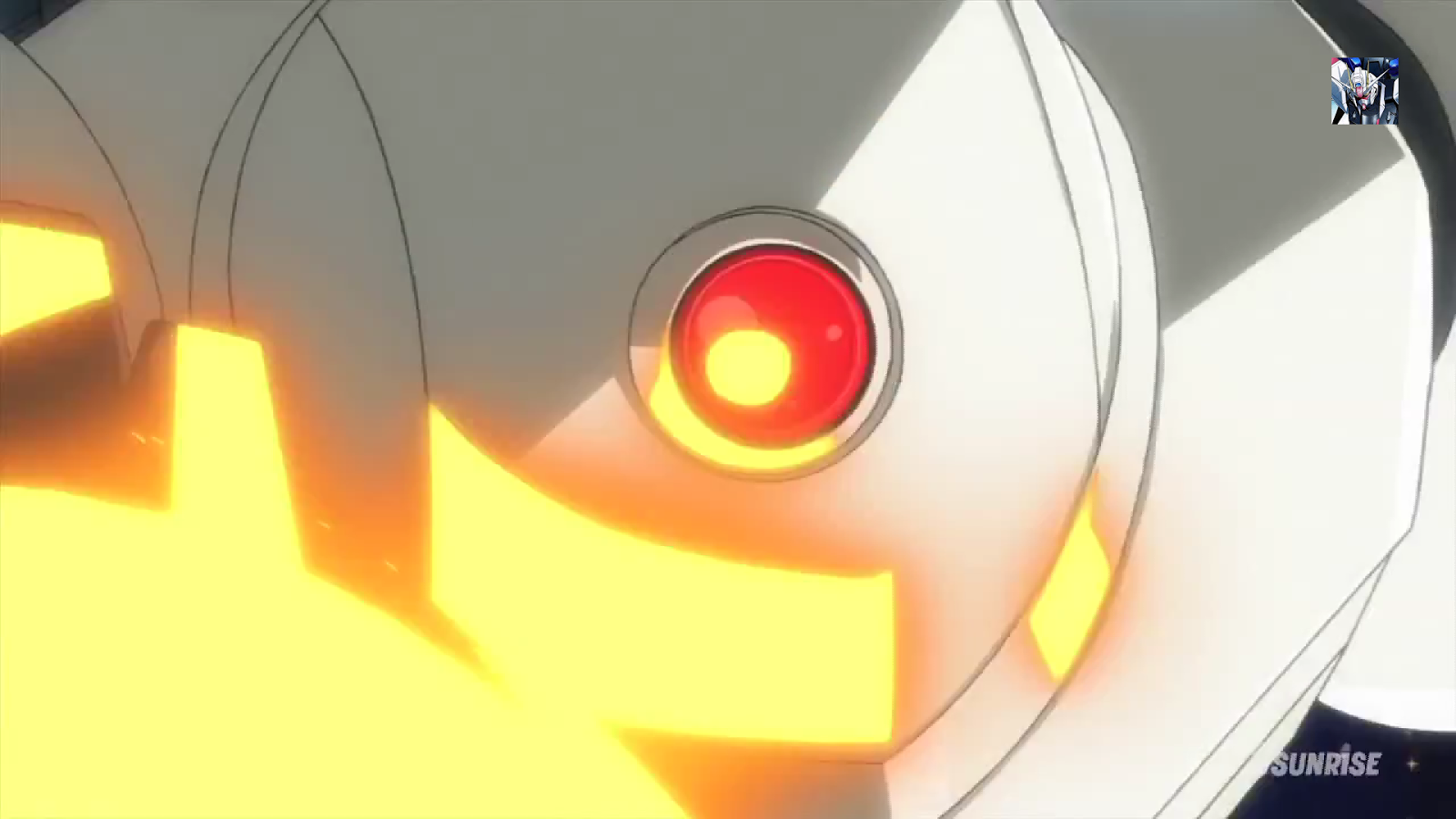 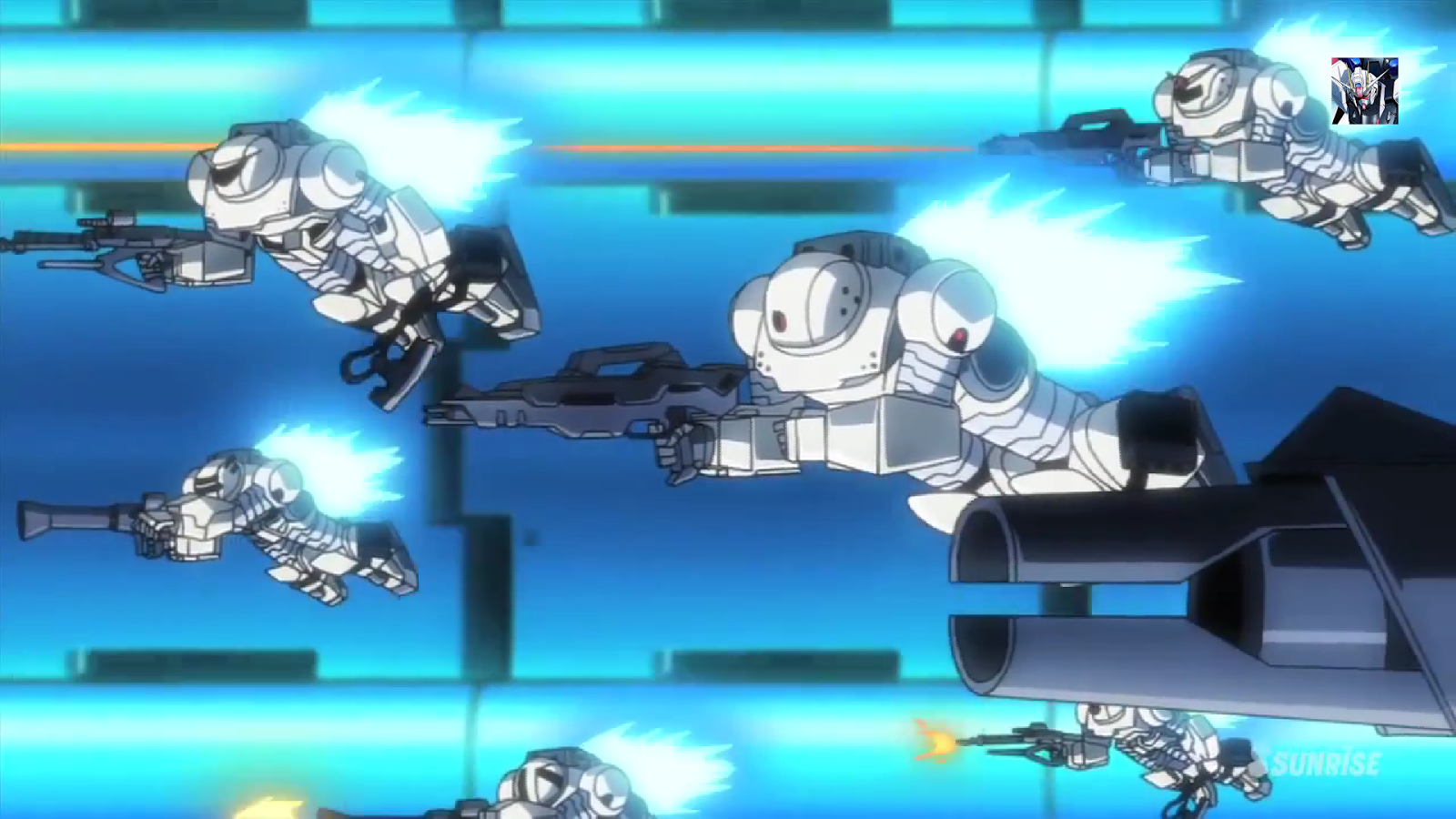 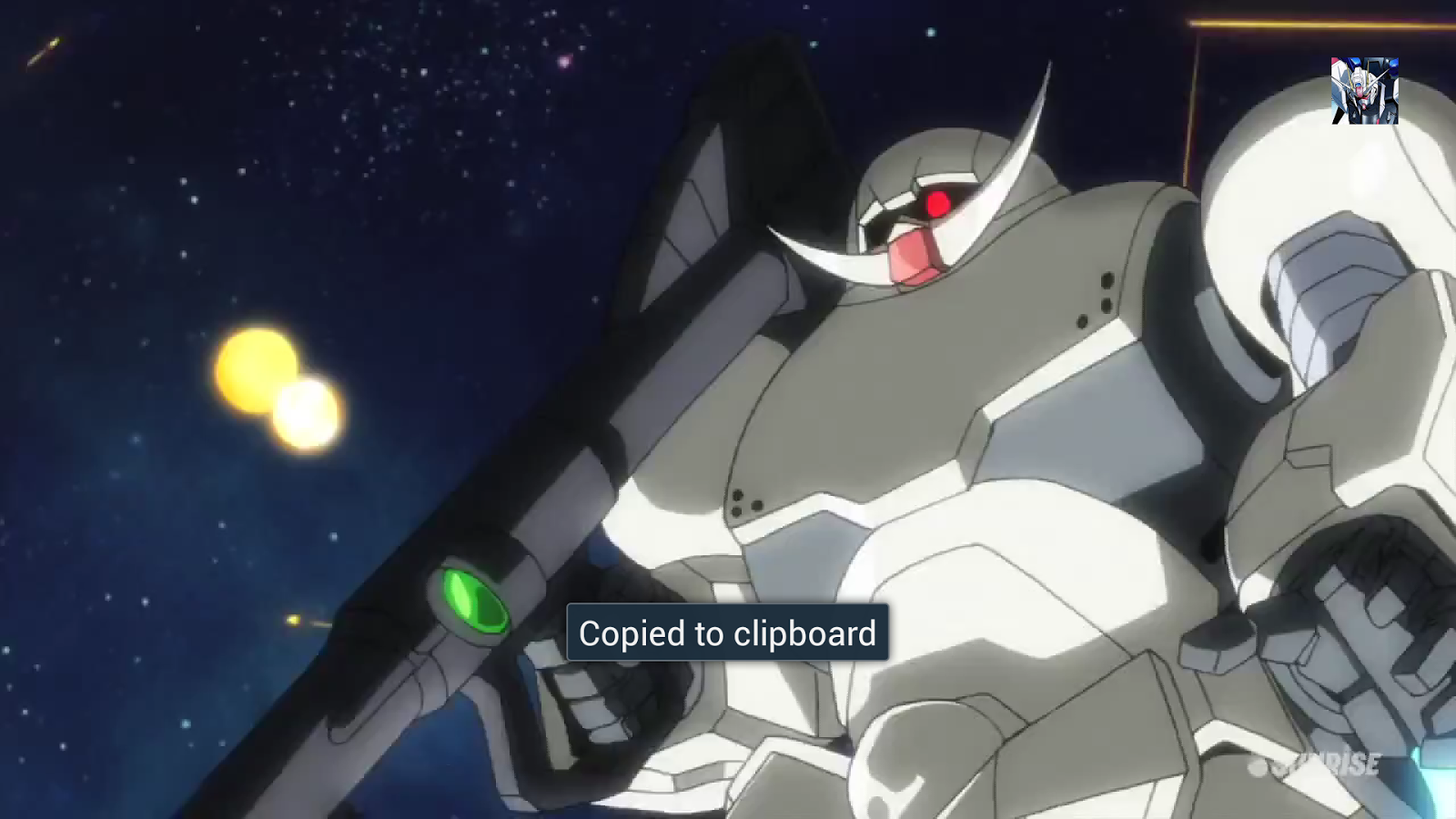 These Mocks swarmed our heroes, giving them a tough time due to their numerical superiority. Here, we can see some of the new Gunpla, as well as some older ones, in action. Ricardo's Wing Gundam Fenice Rinascita showcased its long-ranged prowess, invoking images of the METEOR Unit from Gundam Seed with all its beams and sass. Kirara's pink Gerbera Tetra also showed its worth by downing Mocks with its beam machine gun and wrist-mounted beam vulcan.

Even China's Bearguy-San entered the fray, apologetically slicing Mocks apart with its hand-generated beam saber. Aila's new Miss Sazabi kicked ass, literally as her Gunpla has beam sabers emitting from the feet, combining all of its beam sabers into a spinning vortex of destruction that gave Aila the most flamboyant kill animation yet.

Nils' Sengoku Astray Gundam was equipped with the Matsuri Weapon set, or rather, some parts of it, allowing it to do previously concealed moves that would have given him the win against the Star Build Strike. Even Caroline Yajima's Knight Gundam bravely stood against the thousands of Mocks, a tiny beacon in a sea of enemies.

Meanwhile, Reiji and Sei, being the important protagonists, kept fighting to a minimum and concentrated on getting the Star Build Strike and Build Gundam Mk II into A Baoa Qu.

As our heroes continued to get pounded by a barrage of beams, missiles and assorted weaponry, Mao Yasaka appears in a flash of brilliant blue light. Or rather, his new Crossbone Gundam Maoh appears with a burst of his new enhanced satellite cannon embedded in the skull chest emblem. Showing how OP (overpowered) it is to have an ultimate skill with a one-second cooldown timer, Mao singlehandedly decimated scores of Mocks while spouting expository one-liners.

However, even with Mao's help, they were still hard-pressed against the endless swarms of Mocks that are being churned out by A Baoa Qu.

At this time, we witness two absurdly strong old men entering the battle: Mao's shifu Master Chinan in his pimped-out Master Gundam and - holy crap on a cracker - Mr Ral in a customised Gouf termed the Gouf R35. Proving once and for all that his weakness in the first few episodes of the series was all a facade and that he didn't build up his Zeonic Gunpla Club based on nothing, Mr Ral proceeds to kick ass with an outdated mobile suit.

With a leg boost from Master Chinan, Mr Ral transforms his heat-rod wielding Gouf into a swirling tornado of death reminiscent of Master Gundam's Choukyuu Haou Den'eidan, with Master Chinan delivering the final blow in the form of the Chinan Kick through the eye of the storm.

Master Chinan proves that he is not just an old perverted fogey as well, delivering signature Master Asia moves like the Darkness Finger and Sekiha Tenkyoken, also destroying a shitload of enemies.

At the final bit of their montage, the Gouf wipes out a streak of Mocks with its dual machine cannons while the Master Gundam nukes another line of Mocks with a palm-beam, probably a Sekiha Tenkyoken, eventually culminating in a massive fireball made of exploding fireballs.

As Sei, Reiji, Aila and China finally managed to enter the interior of A Baoa Qu, a massive Genesis supercannon knocks both Miss Sazabi and Bearguy-San out of commission, leaving a still-standing Star Build Strike and Build Gundam MK II to fend off the oncoming hordes of Mocks while trying to get away from the rapidly-recharging Genesis.

At this time, we see Mr Dramatic Hair aka Tatsuya Yuuki aka Meijin Kawaguchi the Third enter the area with his - surprise surprise - Gundam Amazing Exia Repair, complete with the tattered cloth over the left shoulder.

Activating the seriously OP Trans-Am, the Exia removed at least 50 Mocks from existence in a single attack before speaking with Sei/Reiji, heroically telling them to go on and leave here to "us".

By us he meant - good lord - Takeshi Iori and his Perfect Gundam, the logical progression of his Gundam: Last Shooting version. By firing one shot from his shoulder-mounted cannon, Sei's Dad knocks out the Genesis and covers his son and Reiji, who finally enters the chamber where the Arista is kept.

After some drama and switching of the Build Booster Mk II to a still-surviving Star Build Strike, the Arista is finally shattered by more Plasky Magic (Build Knuckle solves everything), this time heterochromatic and hinting at the final iteration of the Build Strike Gundam.

As the dust settles, Sei/Reiji and Tatsuya Yuuki decide to have one last final ultimate Gunpla battle before the Plasky particles disappear, using their kitbashed Gunplas to have a slugfest with no definite outcome, although Sei seemed to have the upper hand. Then in a moment of unbelievable sorrow, Reiji disappears in a flash of red light. But Aila went with him, so he has that covered.

In the ending credits, we see that Plasky Particles can be generated once again, presumably through the efforts of Nils and Caroline, and we see the new Gunpla that Sei has created, the Build Strike Cosmos, which looks EXACTLY like the Star Build Strike, but enveloped with particle auras of red and blue on each side.

As the series ends, looks like my Monday evenings will be devoid of Gundam excitement once again. At least until the new Tomino series begins in the fall.

Let's hope it will at least be as good as GBF.

Email ThisBlogThis!Share to TwitterShare to FacebookShare to Pinterest
Labels: Anime