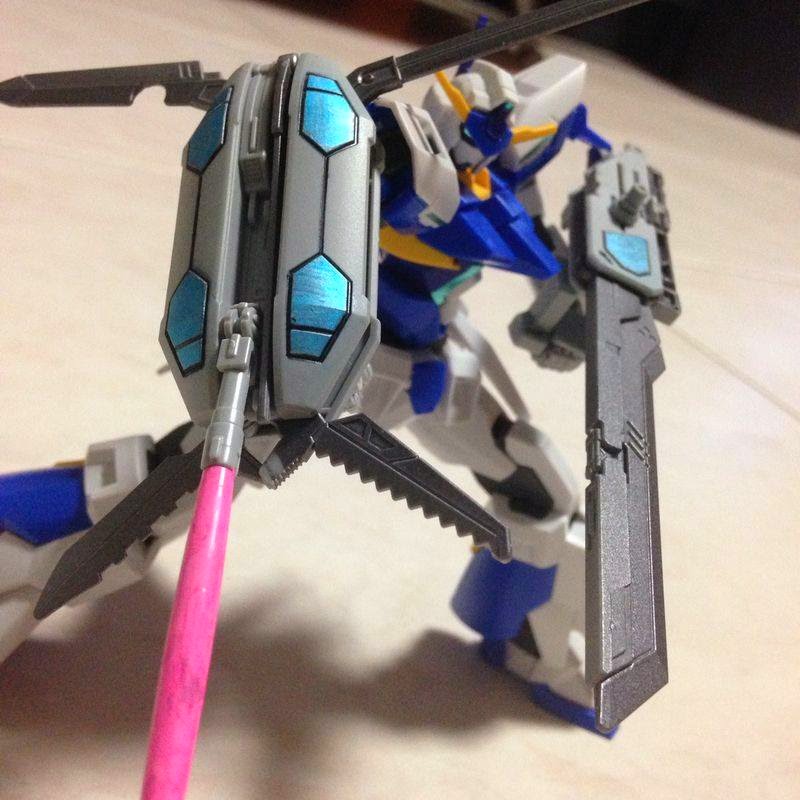 I will be honest: I am weak towards accessories, especially 1/144 ones that my HGs can wield. I spend almost the same amount of time and effort procuring, assembling and beautifying weapon sets and add-ons, and then even more time trying out the different permutations and combinations across kits, dioramas and series.

It explains why I have a 20 cm deep box just to hold "gun-type" weapons.

Today, I will give a quick overview to one of the latest in a line of add-ons I like to call "magazine kits", as they require you to purchase that particular issue with which the premium comes bundled. The  Mecury Rev D kit is the latest set to to join this category, with key examples being the 1/144 Caletvwich for HG Seed 1/144 Gundam Astray Red Frame and the 1/144 XN Raiser for the HG OO 1/144 OO Raiser.

For the purposes of an Accessory Analysis, I will cover Construction, Features and Usability. 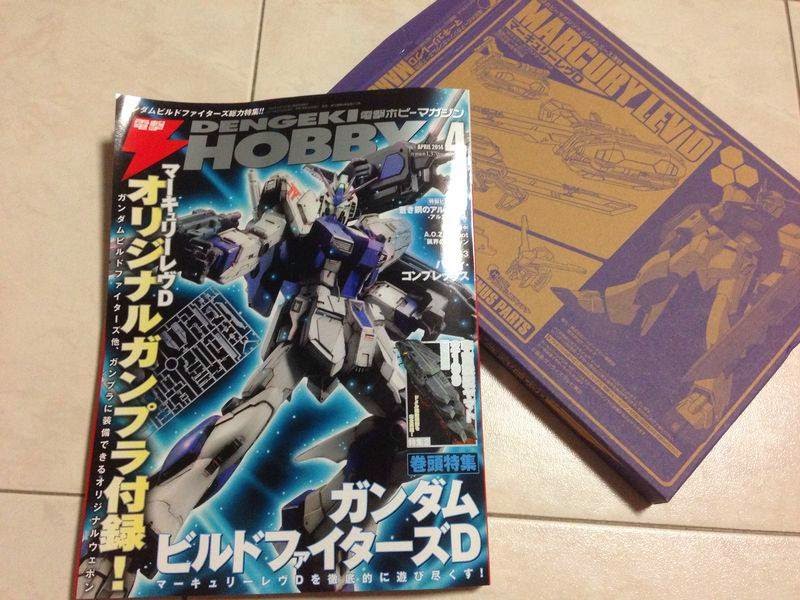 This weapon set can be summarised in three words: Swiss Army Knife.

Essentially two separate weapons, the Mercury Rev D consists of a "blade" half, characteristed by a curved-beetle like frame, and a "gun" half which has a boxy, angular frame. Wielded by the Nu Gundam Brave, a custom mobile suit based off the legendary RX-93 Nu Gundam built and piloted by a young Tatsuya Yuuki, aka Meiji Kawaguchi the Third, this kit only appears in the Gundam Build Fighters comic series, and will likely not see it being translated to the animated series.

An interesting contraption, the Mercury Rev D presents a whole assortment of uses, combinations and potential modifications, chief of which is to anchor the relatively bulky weapons to a kit's forearms to prevent it from swinging too much. Then again, a tighter polycap in the wrist joint should work as well. 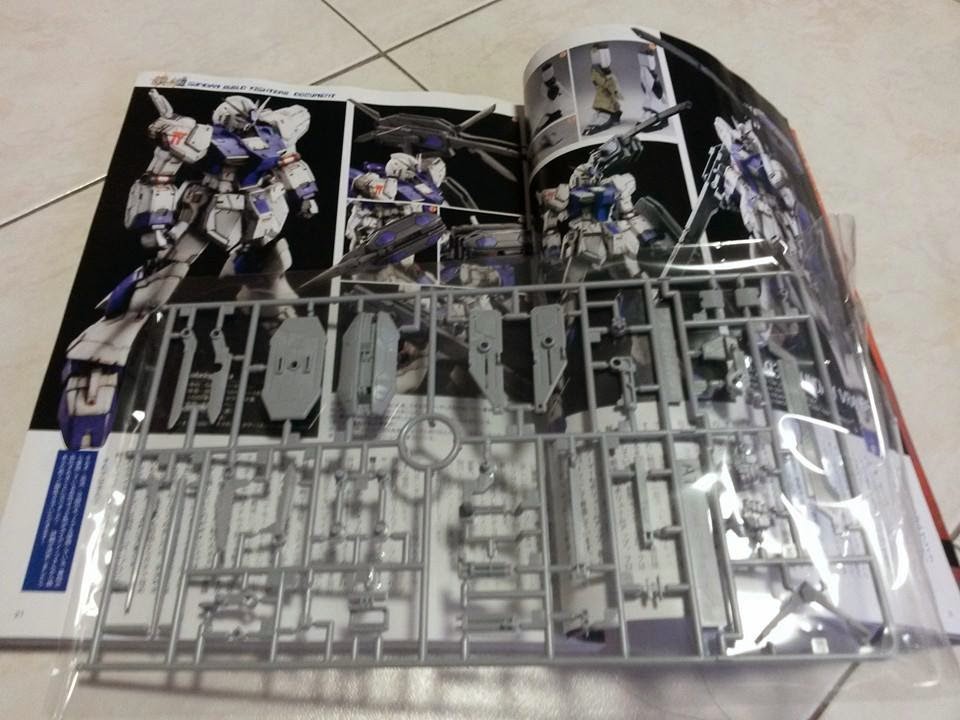 It's only a one-runner affair, how hard can it get?

Assembly is as simple as putting the two halves of the weapon together after filling the empty hollow in the middle with its multiple armaments, just like making a sandwich. The kit also comes with two hands: one right trigger hand for the gun-type and one left saber hand for the blade-type, as well as an enhanced V-Fin for your Nu Gundam Brave modification.

I took a little longer to do up the Mercury Rev D because I decided that I didn't like its stock colour. Before assembly, I sprayed the blades a shade of light gun metal and the guns a darker gun metal, while leaving the main body grey (for lack of a suitable colour). After that, metallic blue was added to the "armor" sections of both units (masking was horrible) before panel lining and finishing with a coat of Mr. Super Clear. Then I got carried away and added RG decals to both units, can't say I'm not happy with the finished product. 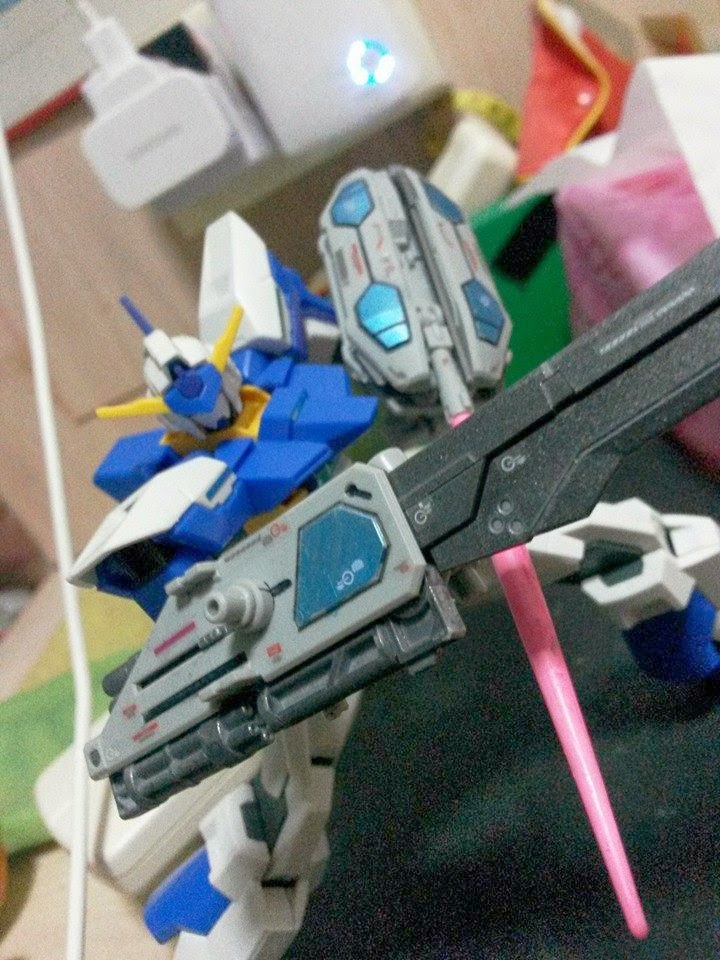 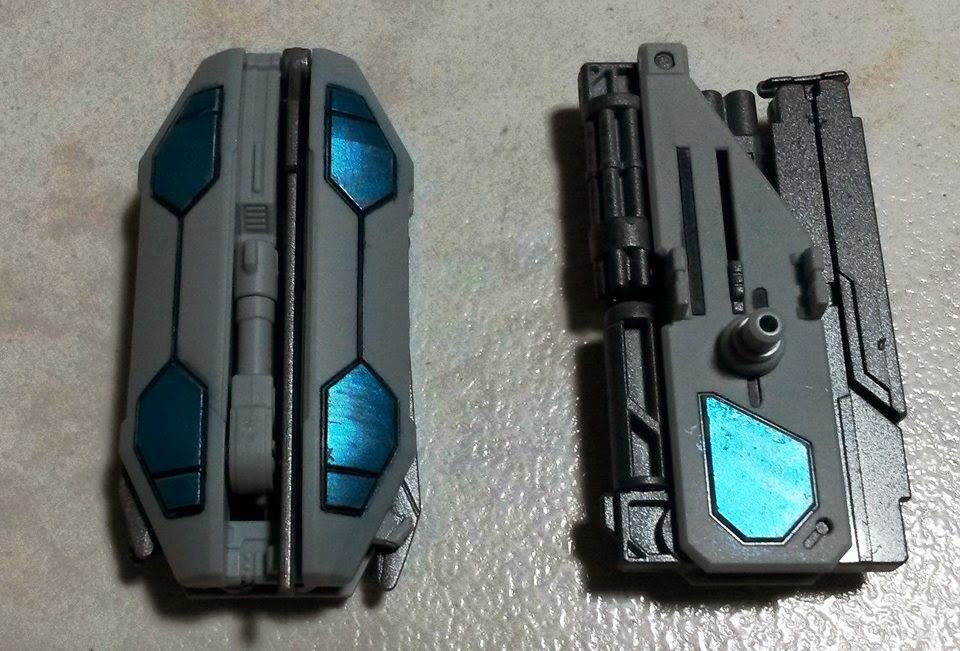 The Mercury Rev D is a unique weapon, something that will perhaps not fare too well in the real world. It aims to combine multiple weapon systems into one solid package, but it runs the risk of being a jack of all trades and master of none. Granted, the thing's cool and all, but practicality remains a concern, and posing with it will take considerable thought and trial.

The blade-half comes with a total of six blades: two claw-like serrated daggers, one sword-like edge, one combat knife, one elongated "spear" as well as a beam saber with an unpainted blade supplied. 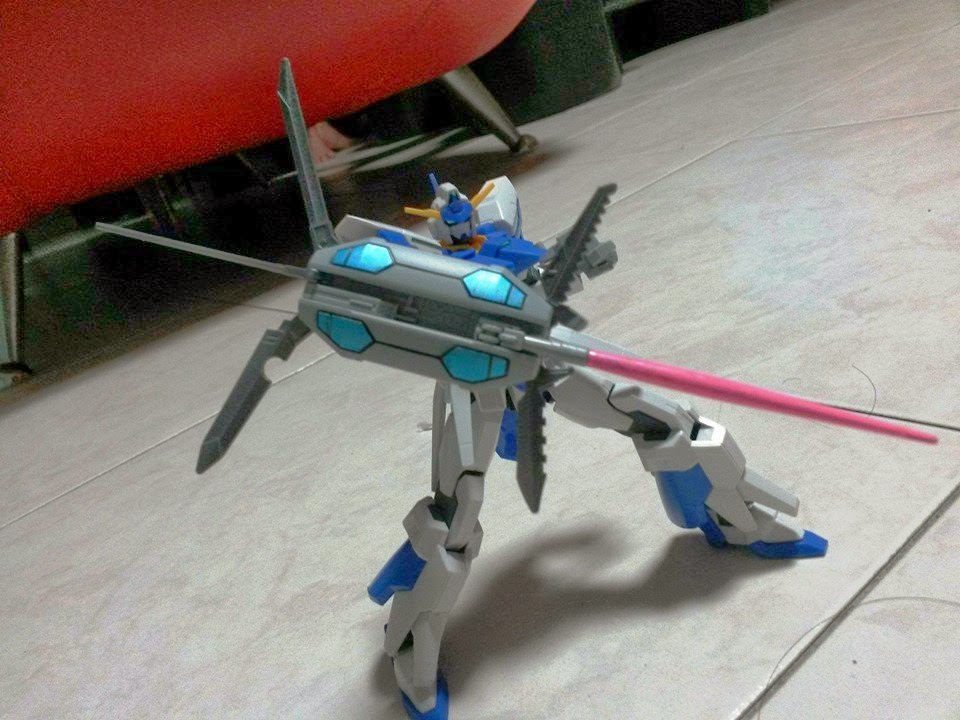 The gun-half consists of a cannon, a mini-Gatling gun, a two-barreled shotgun and a collapsible rail cannon that looks very similar to the high-energy beam cannon mounted on the Destiny Gundam. It also comes with a cannon-length solid blade that attaches to the underside of the barrel. Both halves can be combined into one single unit. 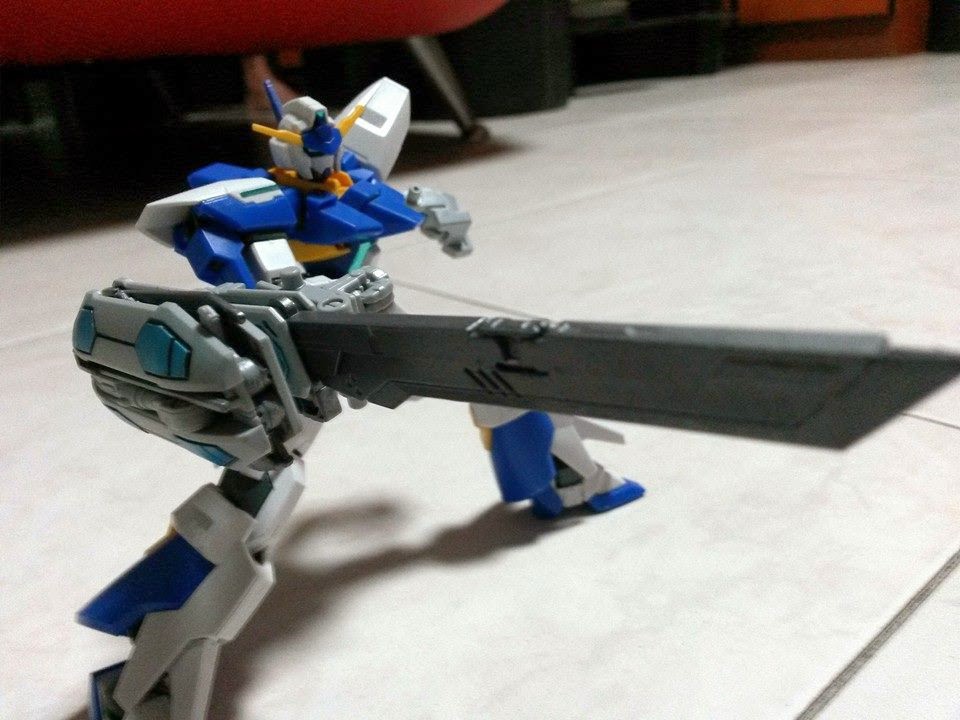 As mentioned, posing with the Mercury Rev D will take some practice. The blade-enabled rail cannon is the best-looker by far, with its length and detail adding some substance to the relatively bland weapon. The Mercury Rev D can also be mounted to backpacks and side armor ports, but it is a tad flimsy and doesn't really look as nice as when mounted on the arms. Two different trigger units are provided for each half and although interchangeable, they will fit better in the parts they are intended for.

The Mercury Rev D is an acquired taste, but its badassery cannot be denied after striking a good pose.
Posted by Gunplanerd at 7:05 PM