I got this kit a couple of weeks back via the online shopping portal I frequent (i.e. Taobao) and was hoping to see an Astray Gold Frame, henceforth referred to as AGF, rolled out in its true chrome gold colours. The first release of the HGUC 1/144 Unicorn Gundam Unit 03 Phenex was a MAJOR disappointment, as it came in a colour I have eloquently termed as "Pee-Gold". For a kit that is 90% gold, you can imagine the chagrin of many modelers who got swindled by flattering photos of painted Phenexes.


So before committing to this AGF, I did my rounds on the various blogs, trying to find a hint of a runner preview so that I could decide if I really wanted to get it. I'm guessing that the kit is still too new (Feb. 2014 release) and/or too exclusive that modelers can't readily get their hands on a set. The promotional images from P-Bandai showed the AGF in a shiny, golden colour that wasn't really chrome, but still managed to come across as striking. This should have been my first clue, since Bandai had the habits of showing their chrome kits with lens flares and shiny effects. The AGF had none.

So I dug deeper, trying to find finished kits or at least a damn runner preview. All I got were exhibit shots from the various Gunpla showcases in Japan, which showed the AGF in a matte gold finish. The colour was less striking that the images on the promotional material, but it still had the luster and shine of a gold-plated finish, even if it came across as rather dull. That should have been my second clue.

Then I searched on the shopping portal I use. It was long and arduous, but I managed to find one or two shops that carried the elusive kit. However, they were no help at all, only showing the promotional image as well as hazy shots of the box. On hindsight, I probably should have read the fine print in Chinese, which might have stated that the product is not plated gold, although the exorbitant price (MSRP: S$48/-) would have justified the chrome finish.

So with sadness, I have to say that the AGF could have been a better kit. But, it still manages to look awesome, but be prepared to work for it.

This Kit Insight will be lengthy, filled with words and lots of hi-res pictures for your viewing pleasure. The Astray Gold Frame holds the distinction of being the first painted kit to be added to my collection. 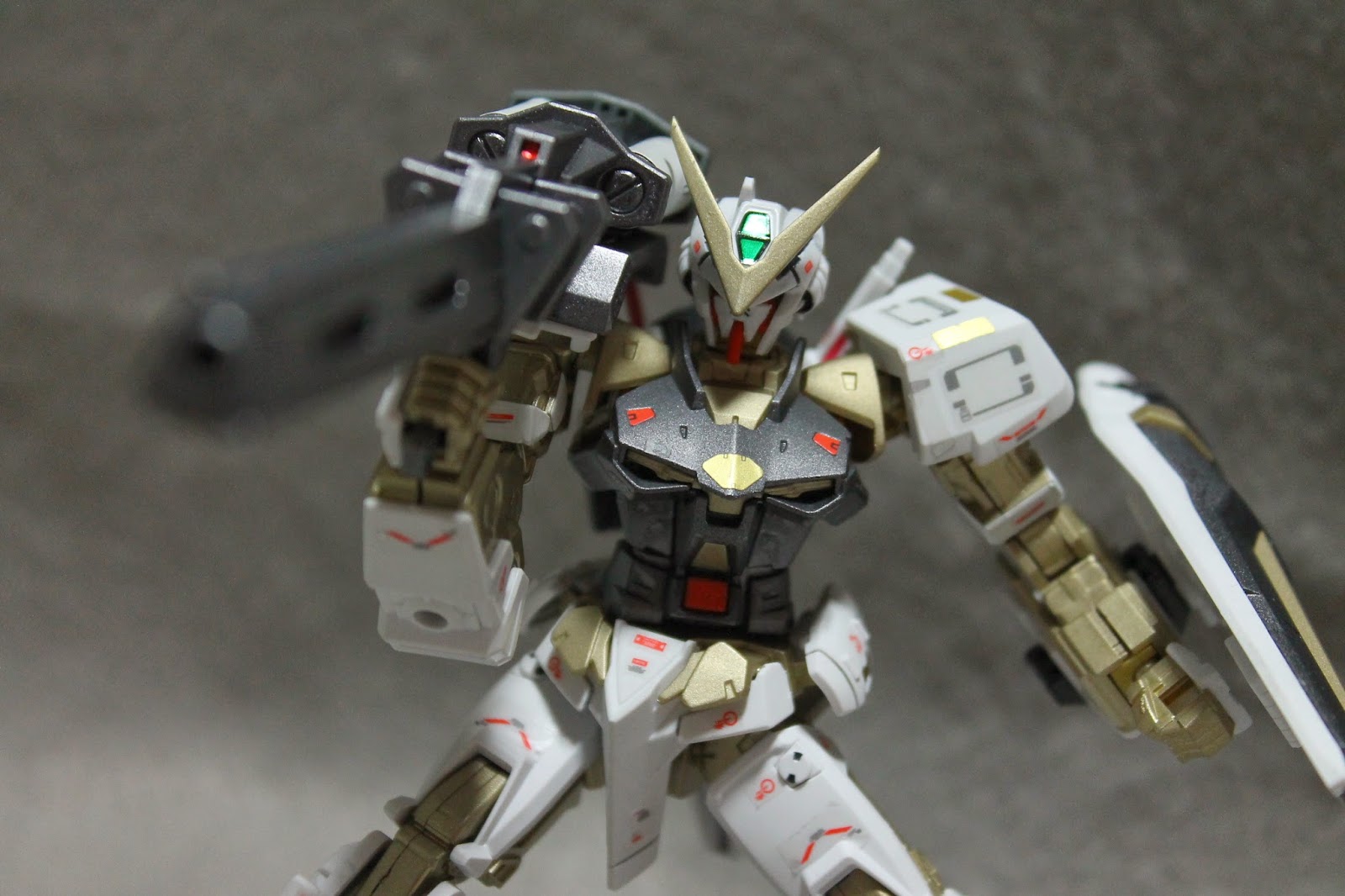 The AGF is one of five Astray-type Gundams developed by the Orb Union in the Cosmic Era, supposedly to act as a deterrent to ZAFT and Earth Alliance Gundams and mobile suits. These high-performance machines agile, nimble and could use beam weaponry, and were eventually mass produced as the M1 Astrays before being superseded by the transformable Murasames. However, arguably the most popular Astray is the Astray Red Frame, with the Gerbera Straight Katana, a stark contrast in a battlefield dominated by beam weaponry. 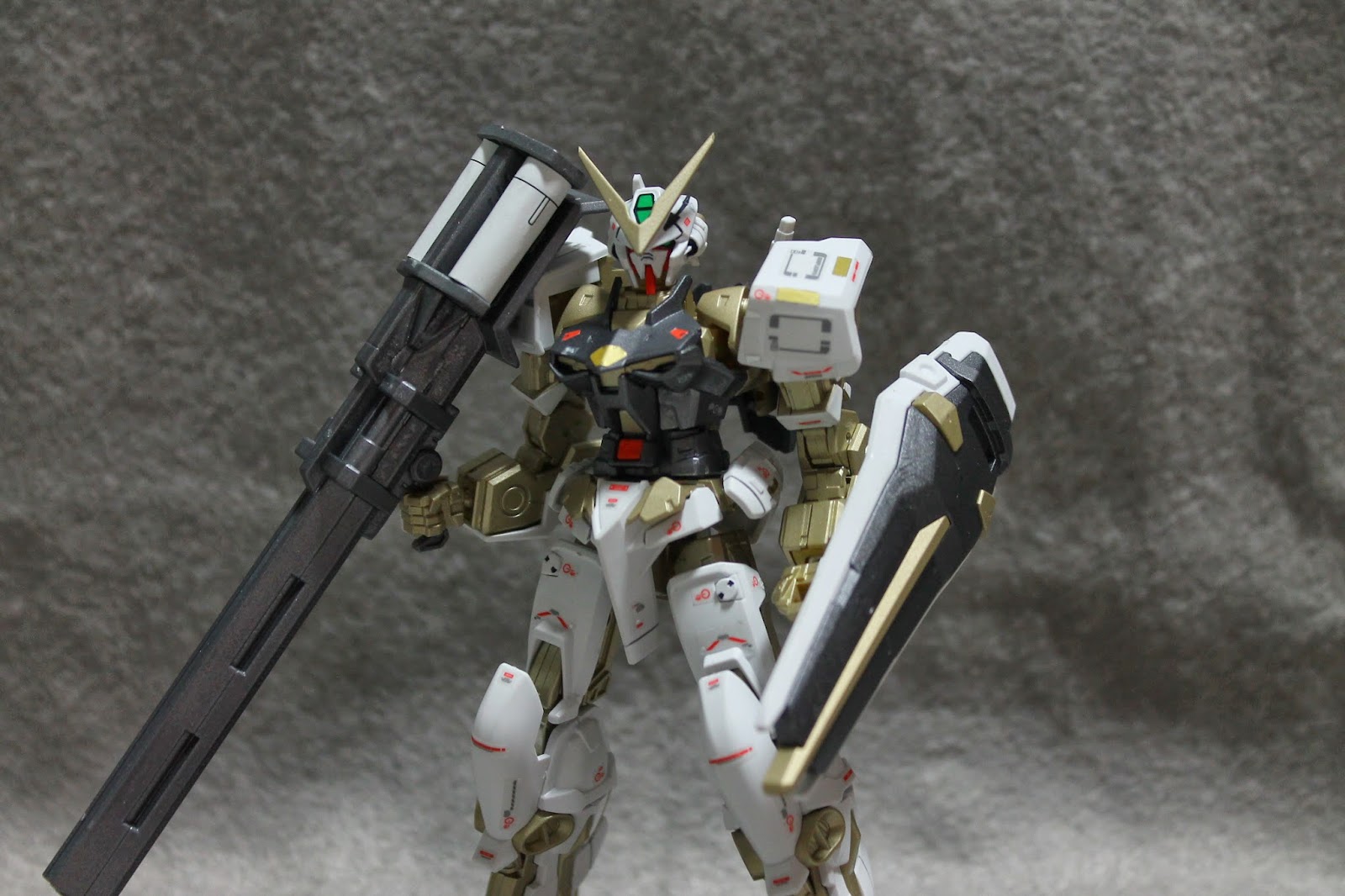 The AGF kit uses the same mold as the Astray Red Frame (Flight Unit) kit that was released in the last quarter of 2013, featuring more streamlined proportions, longer limbs, improved articulation and a larger V-fin. In essence, the new Astray mold is ripped.The only difference is the colour of the titular frame parts as well as the armament provided. The Red Frame came with its signature katana with scabbard, the flight unit, a LaGOWE head that functions as a beam saber as well as the standard backpack beam sabers, Type 71 beam rifle and shield. The AGF only has the last three weapons, with the rest replaced by a 350mm "Gáe Bulg" Rail Bazooka, essentially a handheld railgun. It also comes with a stump for the right arm to replicate the scene from the comic books. 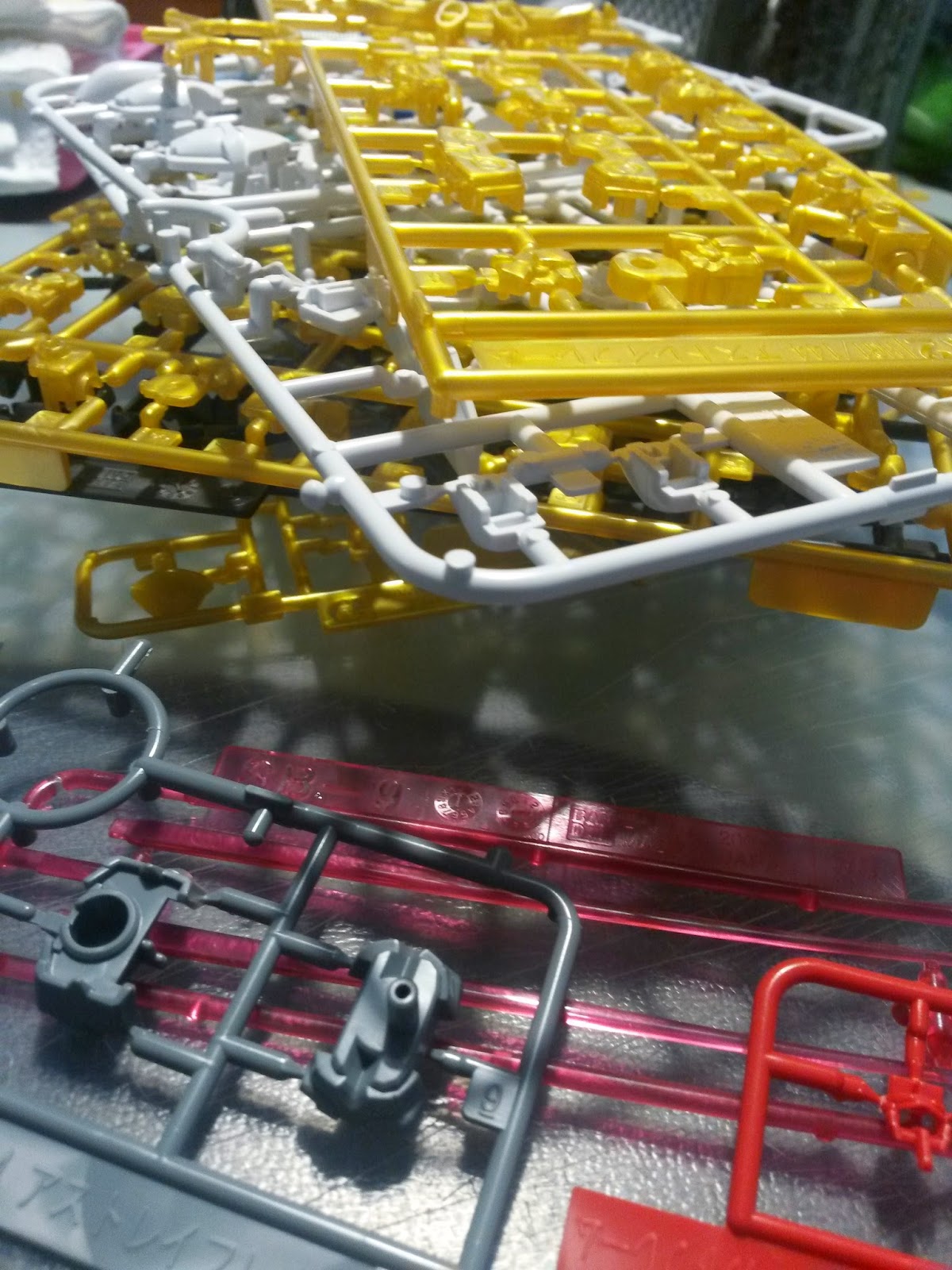 As you can see in the runner preview above, the Gold in Astray Gold Frame is definitely not the gold in the promotional images or showcase photos. It is really the gold of the RG Strike Freedom's inner frame, albeit a tad lighter in shade. 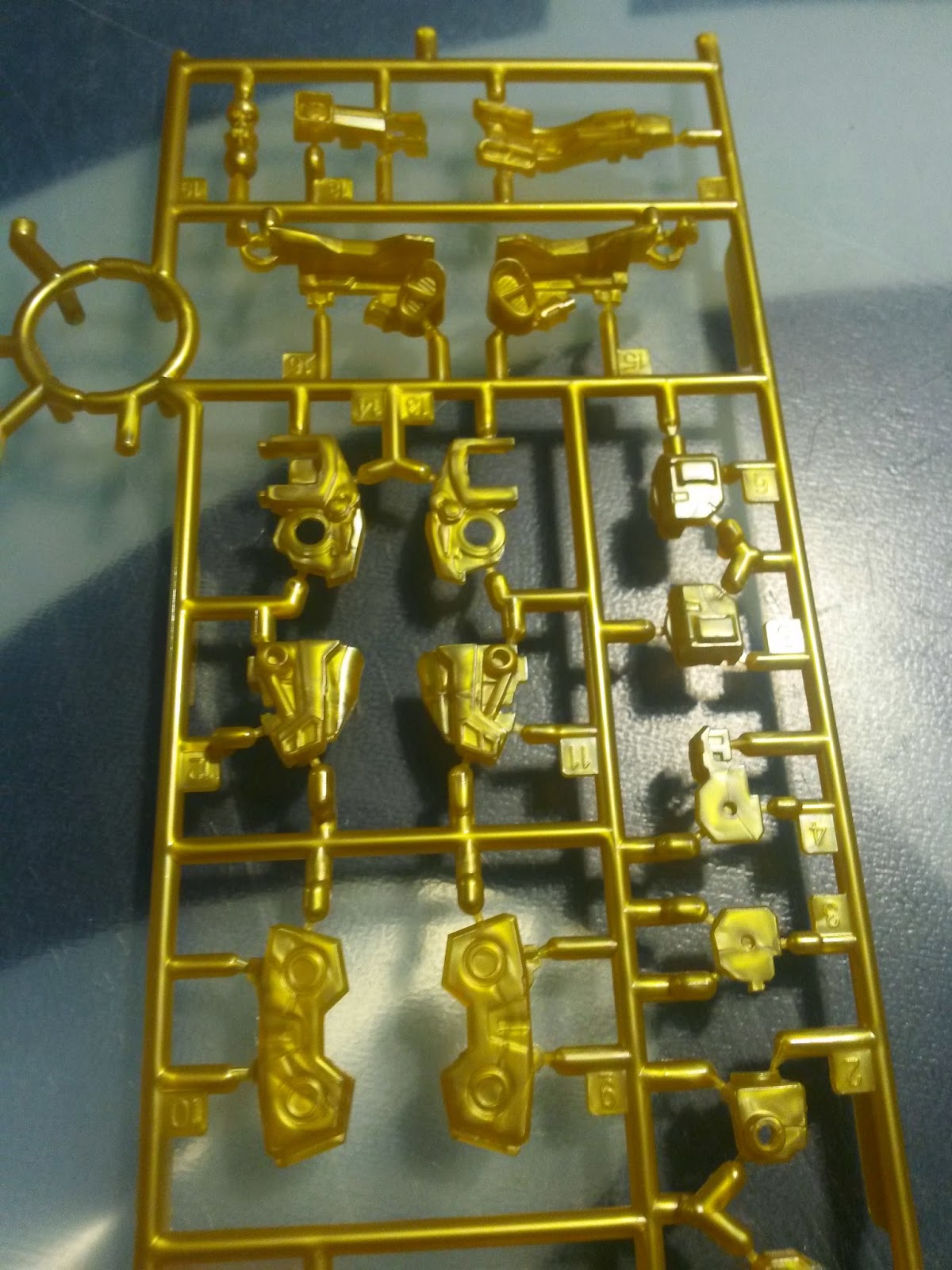 I really did not want to build it in this crappy colour, it wouldn't be doing the kit justice. Therefore, I decided to give it a new coat of paint before constructing the kit.


The colour I eventually settled for was Tamiya Titanium Gold. It is a half-shiny, bronze-metal golden hybrid that somehow manages to look good on the AGF. Although its nowhere near the chrome gold of the HG 1/100 Astray Gold Frame, I feel that this shade of gold gives the AGF a more tactical look, something more befitting of a war-torn universe. The following is how the new colour contrasts with the old one. 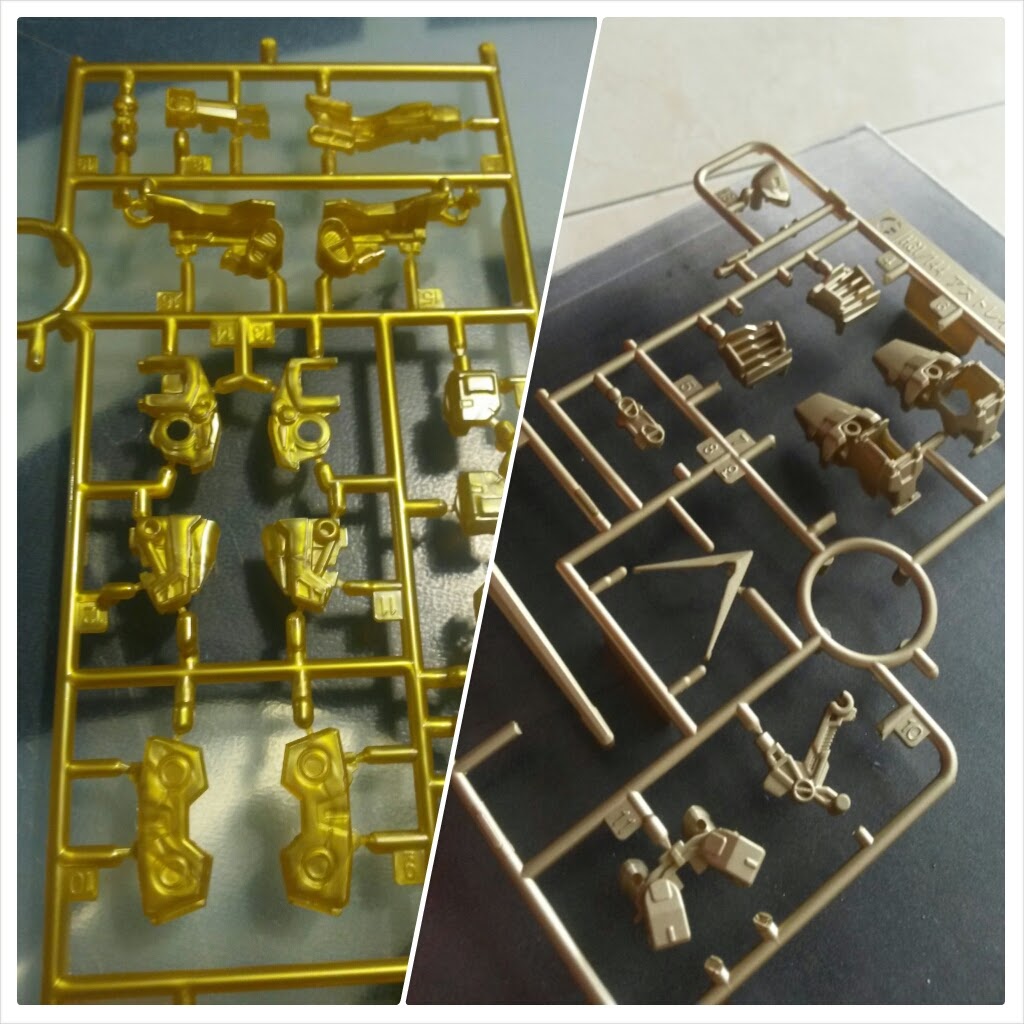 Now, you might think that spray painting entire runners is easy. Yes, the actual spraying is effortless, but the preparatory work that goes into getting the runners ready for paint can be a chore.

To ensure that each part is sufficiently covered in gold, I nipped off the sprues only until one remained in contact with each part. Further, the nipped sprues were trimmed down, to minimise obstruction between the paint and the part. This went on for the three gold runners, and then the black runners (Tamiya Gun Metal) and the grey ones (Tamiya Light Gun Metal). Since I was already at it, might as well go all the way. 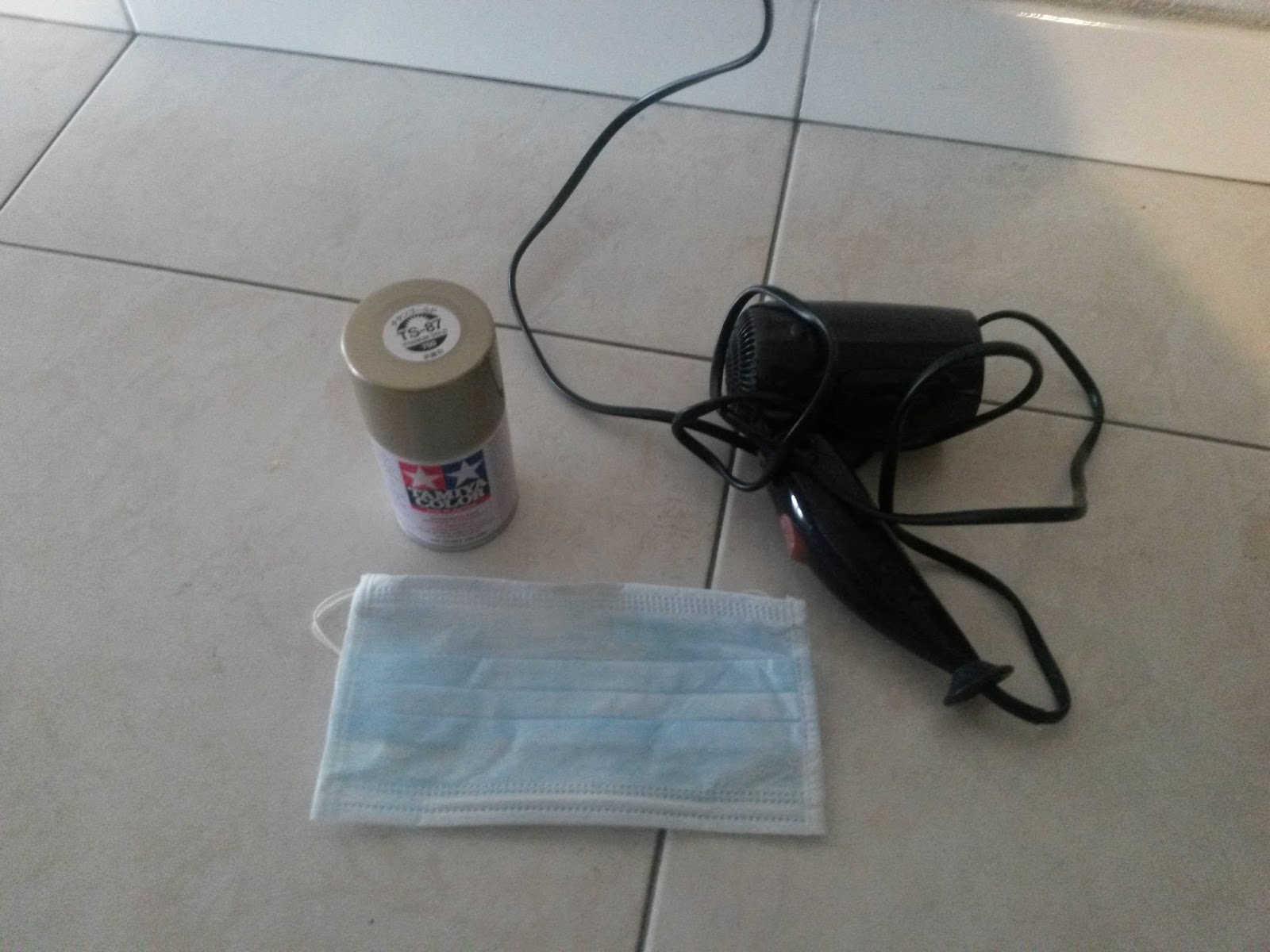 Once the runners were ready, spraying could begin. To help accelerate the process, I brought in my sister's hairdryer to hasten the drying. Also, do wear a mask when doing heavy spray painting, it's not good to cough out gold-colour phlegm even if it is the colour of prosperity.

As a rule of thumb, multiple light coats are better than a single heavy one. Reason being that heavy bursts of paint tend to congeal on your parts, creating pockets that are at once hard to dry and also look very uneven. So exercise a little patience and do your runners one coat at a time, the hair dryer will come in very handy.

Once painting of all runners is complete, leave them to dry for a little while (30 minutes) before proceeding with building the damned thing. The AGF is a highly-detailed kit, by HG standards. Its limbs have lines and the imagery of machinery molded, which will give panel line buffs a field day. The head itself is pretty detailed, although a little black at the sides and top of the head will enhance its look further.

The AGF doesn't really have much stickers per se, just a new whites here and there as well as the requisite sensor ones. As you can see, I went and RG-ed the kit, giving it realistic decals almost everywhere. The challenge was in the shoulders, as they are basically empty white slabs of plastic with nary a panel line anyway. Thank god the finished product looks decent. 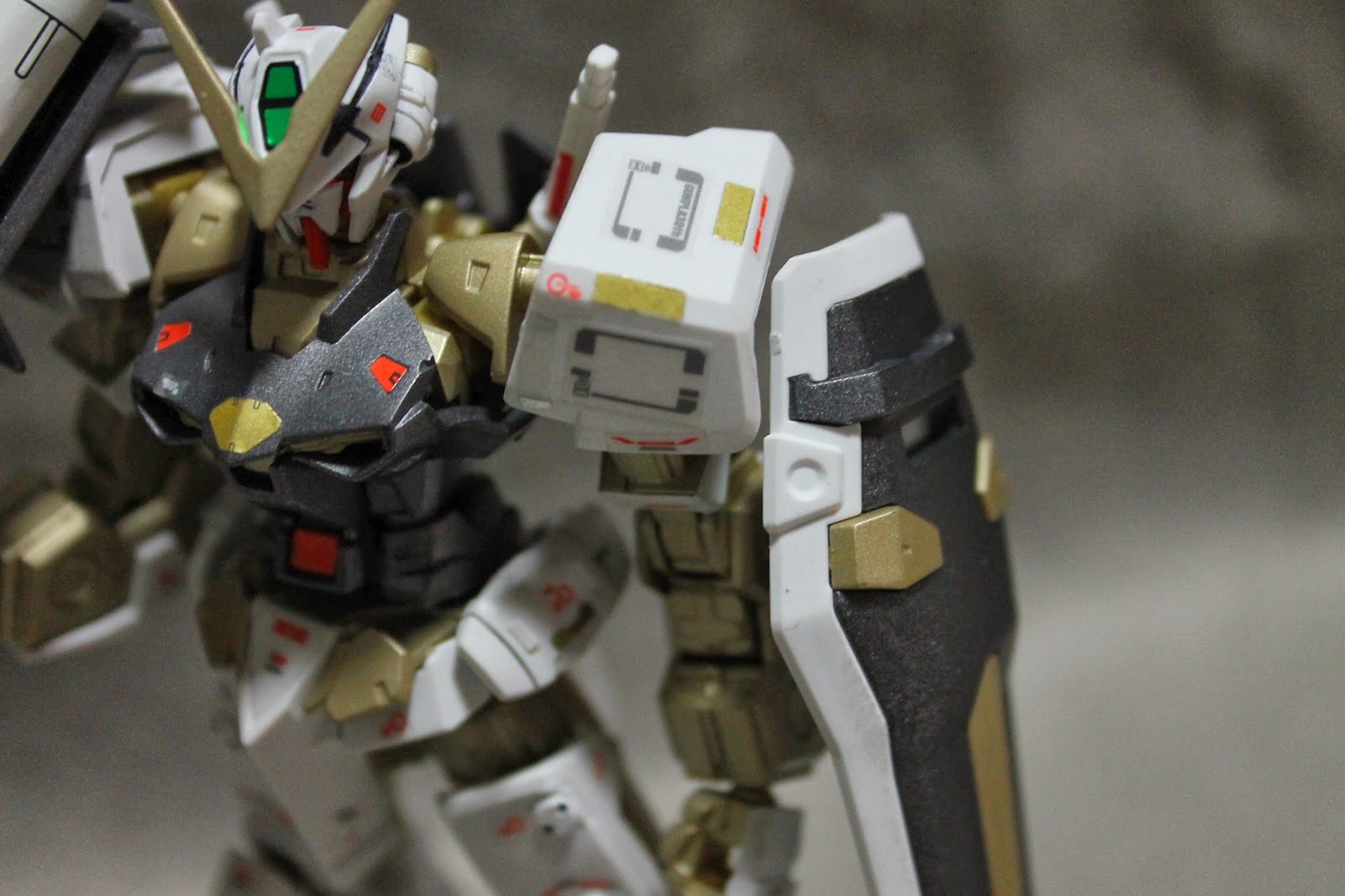 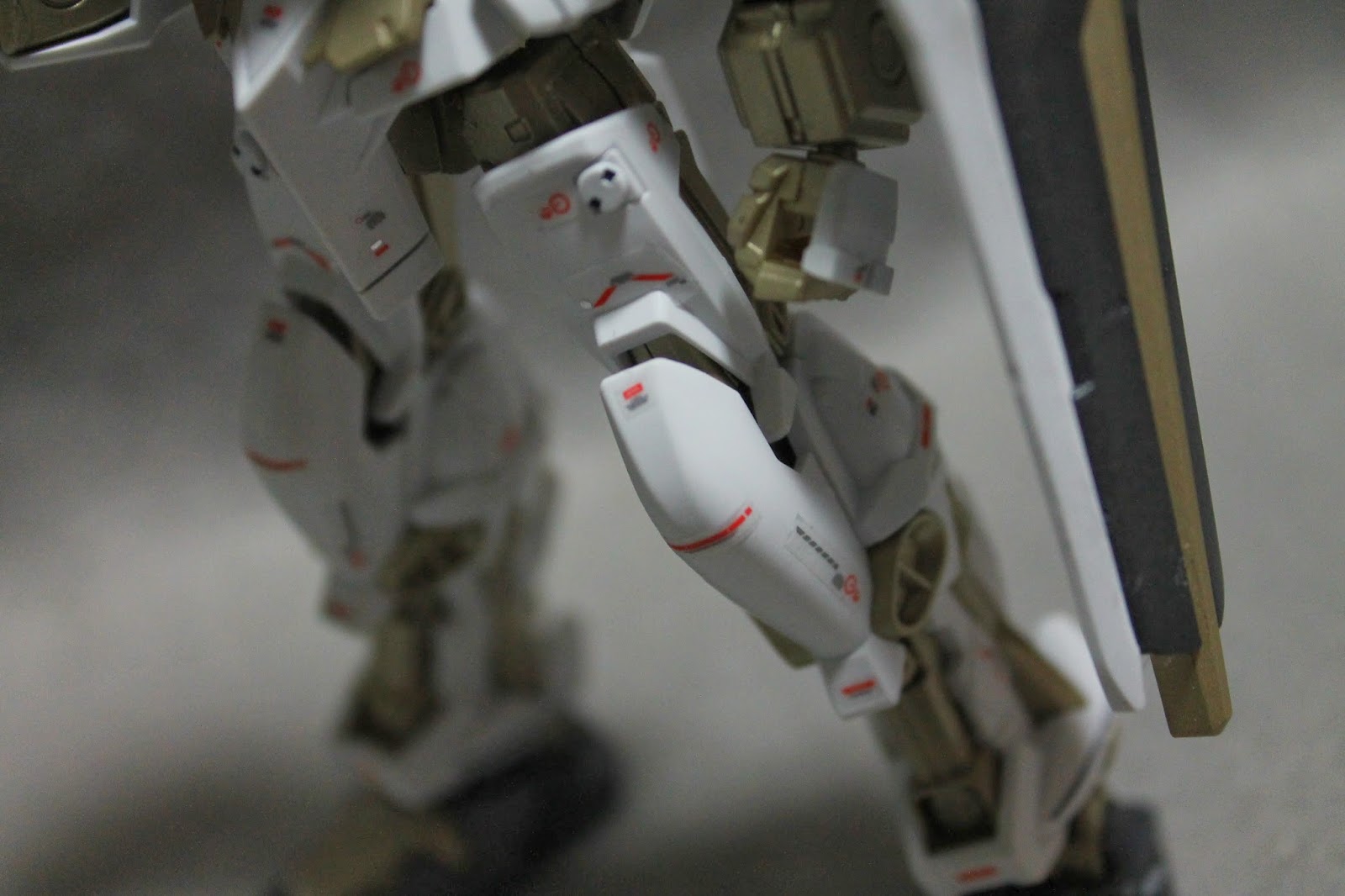 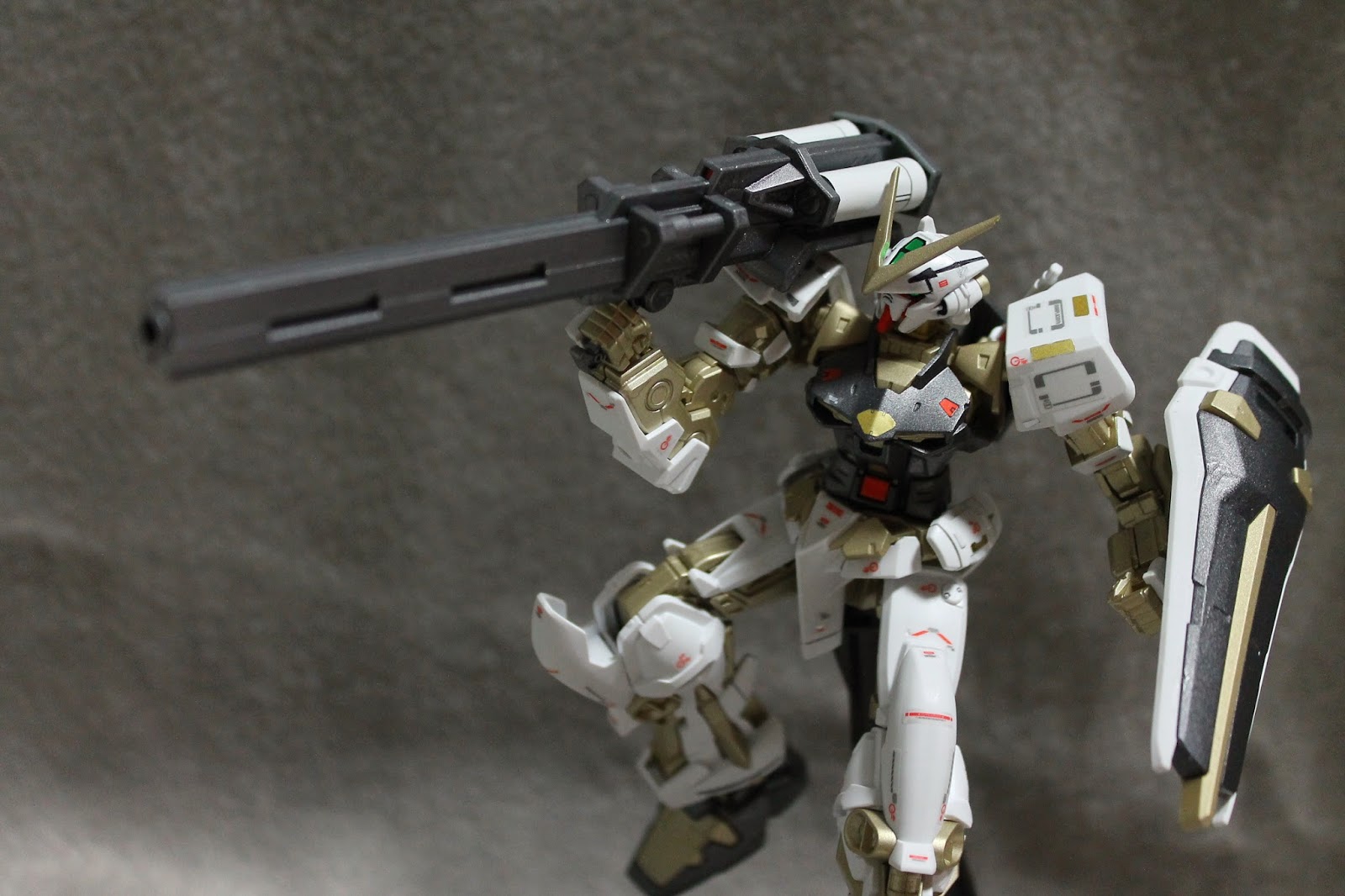 Astray kits are some of the most poseable HG kits out there, being able to pull off the two-handed sword pose while free-standing. This one is no exception, with hands touching the shoulders and legs being able to spread for kicking poses. 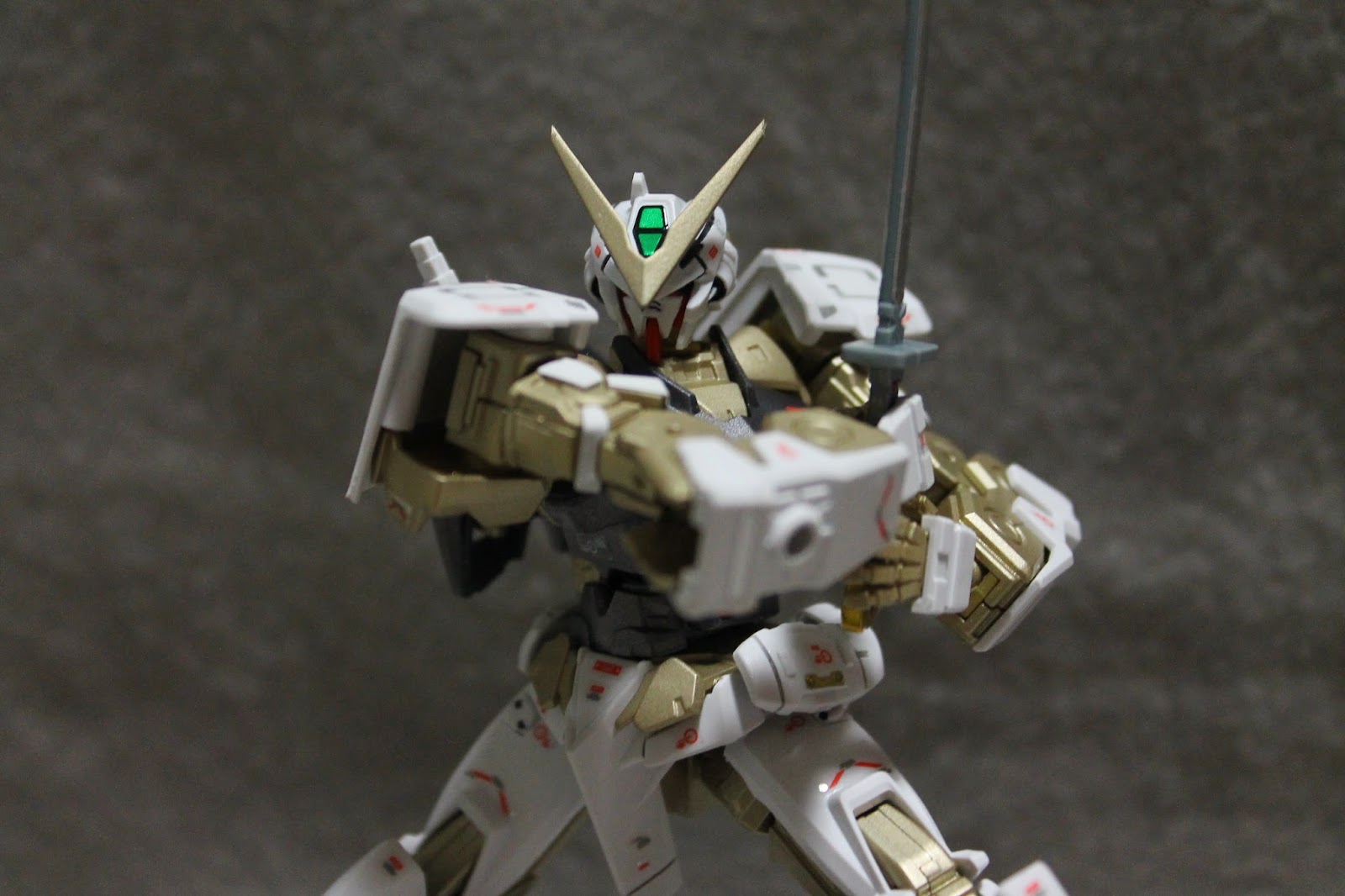 A standard PC-peg at the bottom of the waist unit allows you to use standard action bases and stands to perform more complex poses. 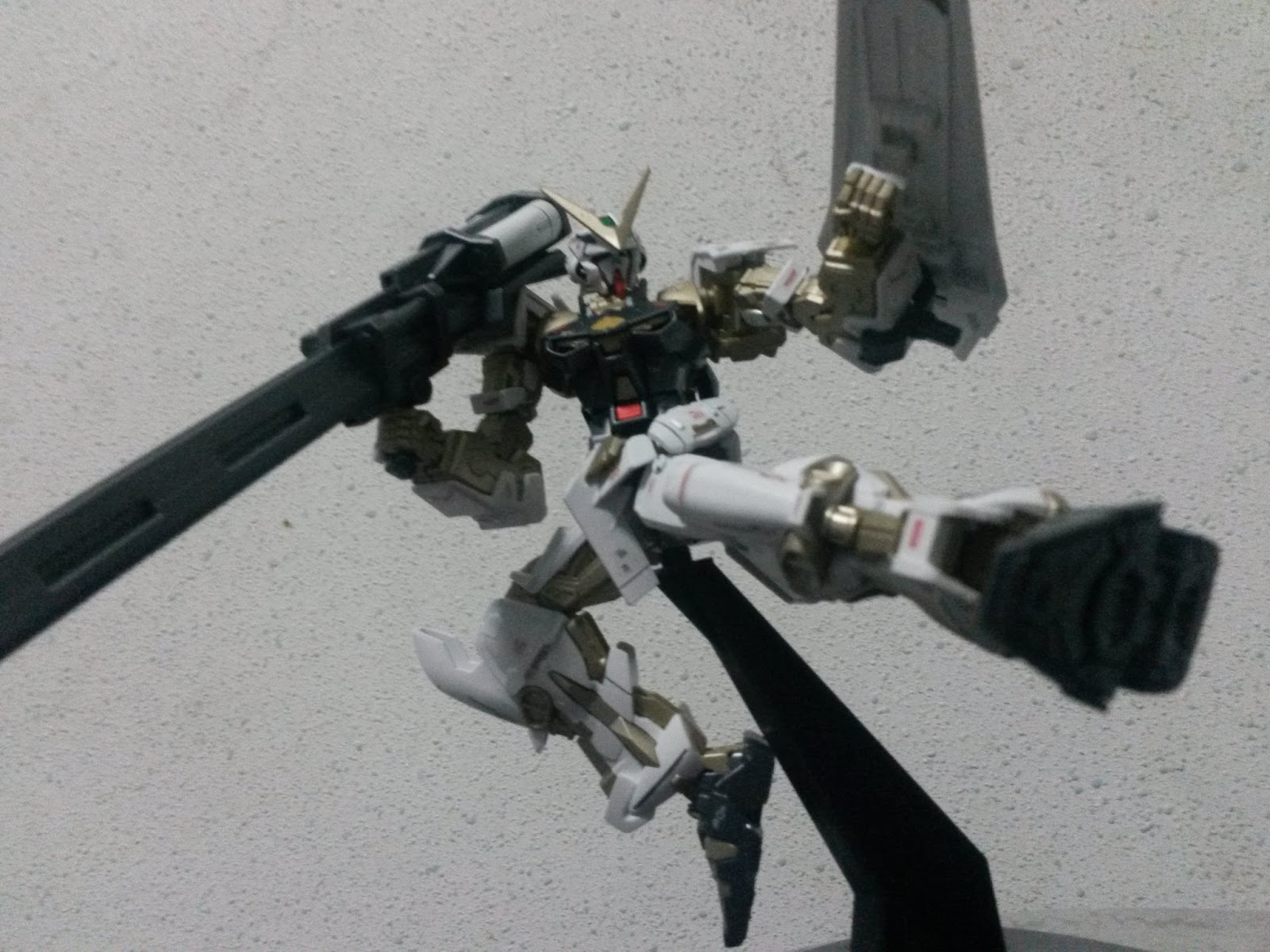 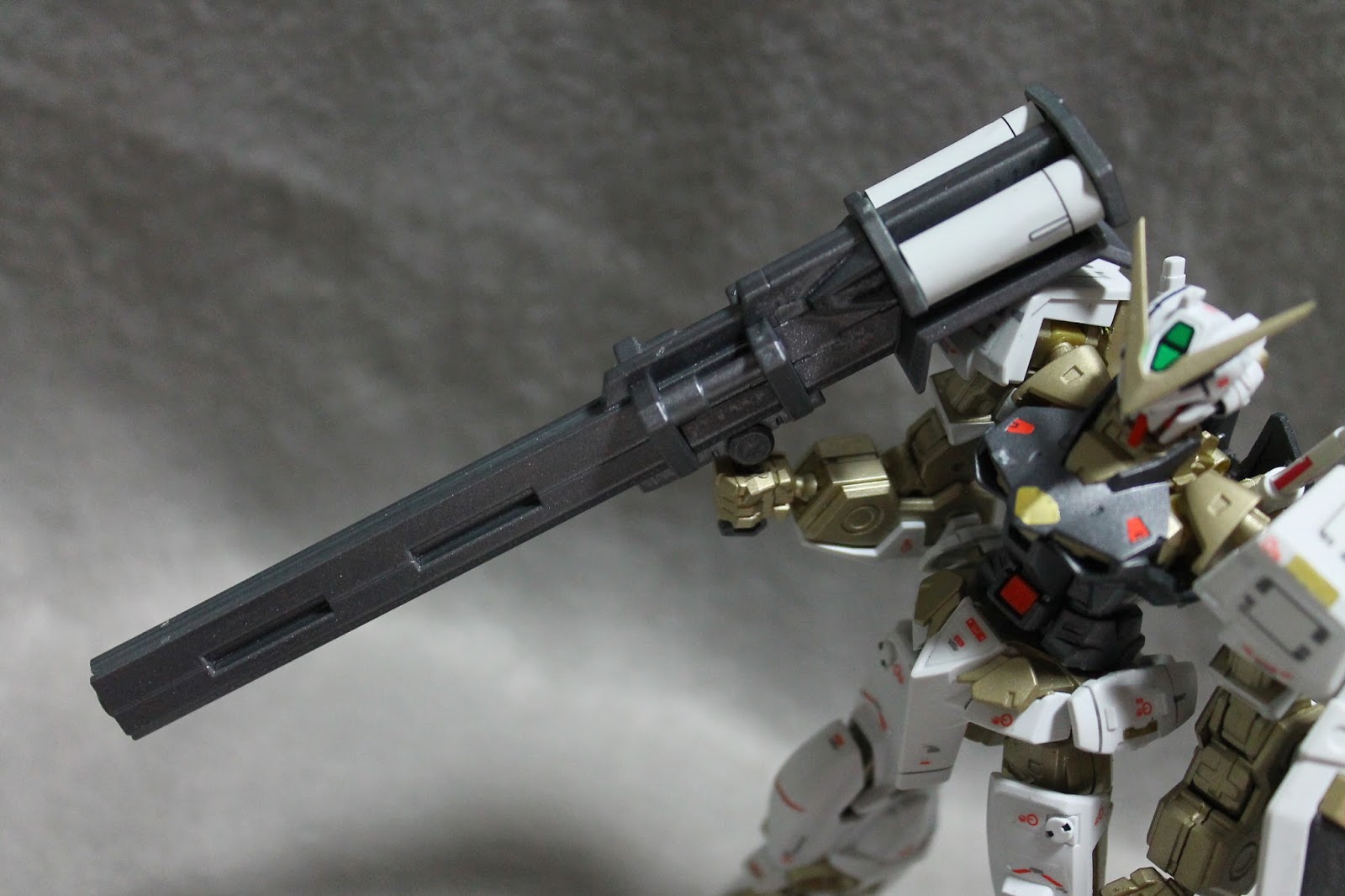 The only extras the AGF comes with is the Rail Bazooka and the two open hands. Of course, the Rail Bazooka didn't come in that kickass colour above, it came in plain Bandai dark grey. The rest of the weapons are the fairly standard beam rifle, shield and beam sabers as mentioned earlier. 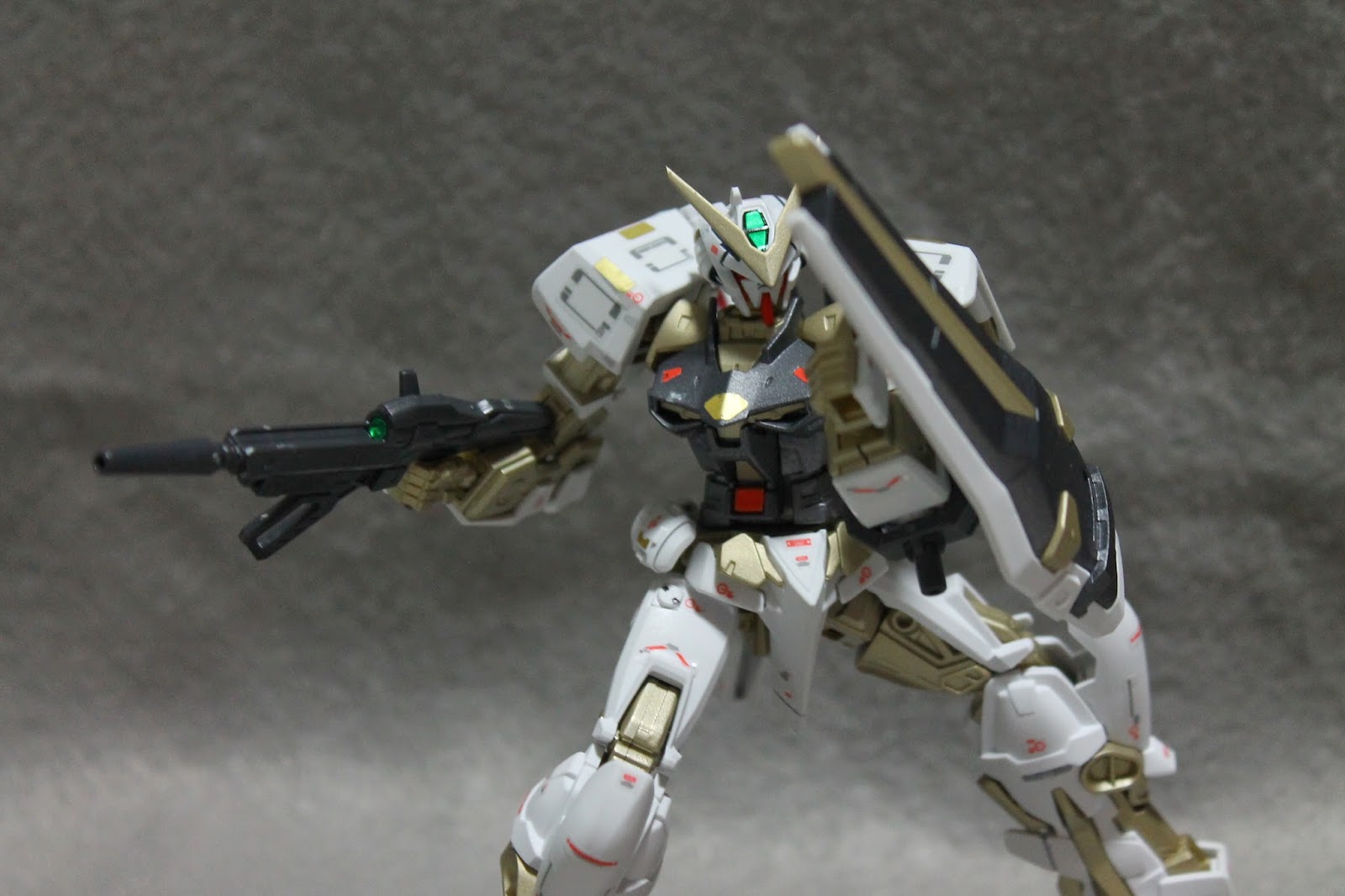 Being of the same mold as the Astray Red Frame Flight unit, it is able to wield the new Gerbera Straight. The older, fatter version of the katana cannot fit into the smaller hands of the AGF. 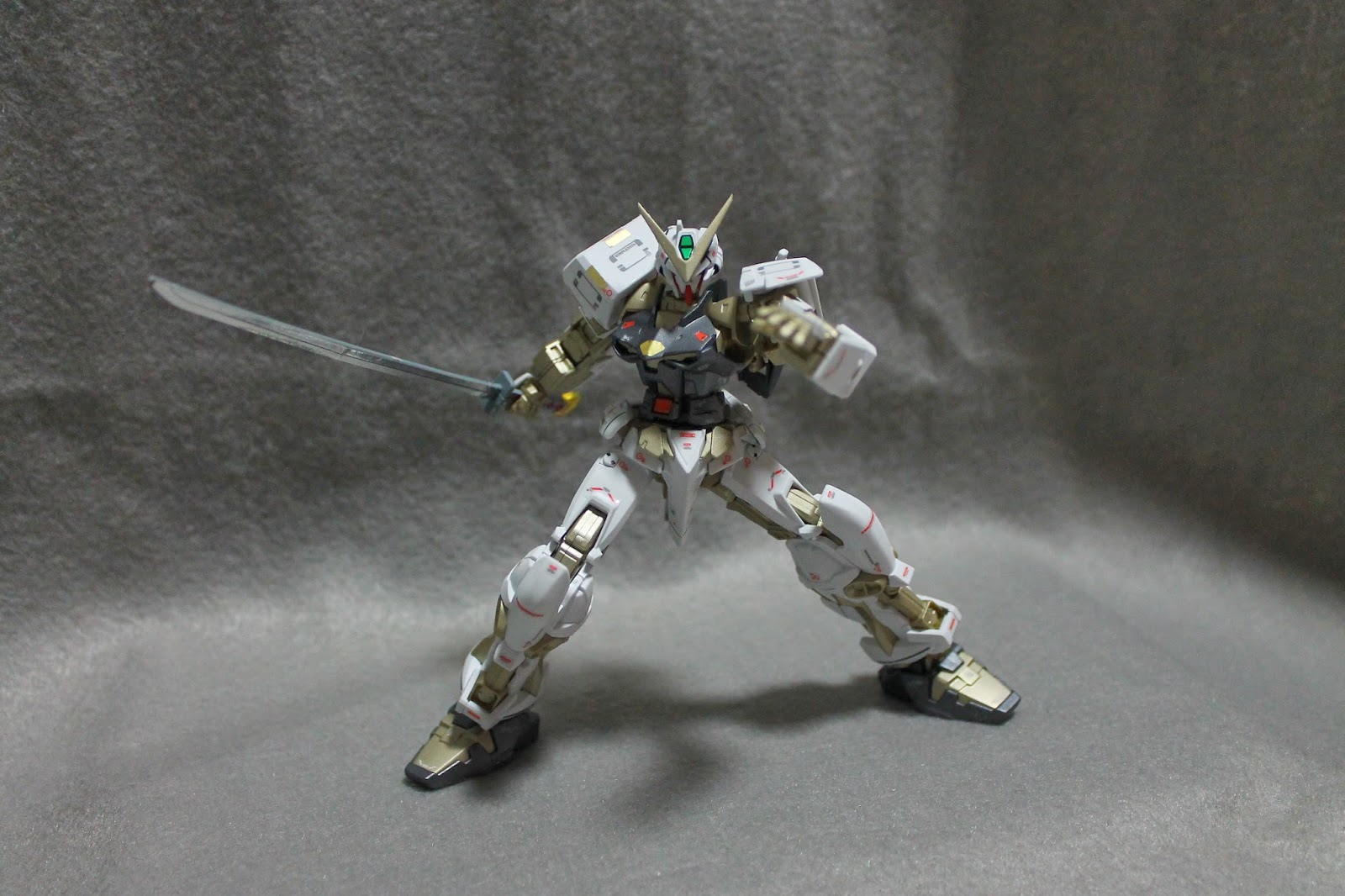 Also, the HG 1/144 Caletvwich support weapon can be utilised in a similar fashion. I really need to paint that thing. 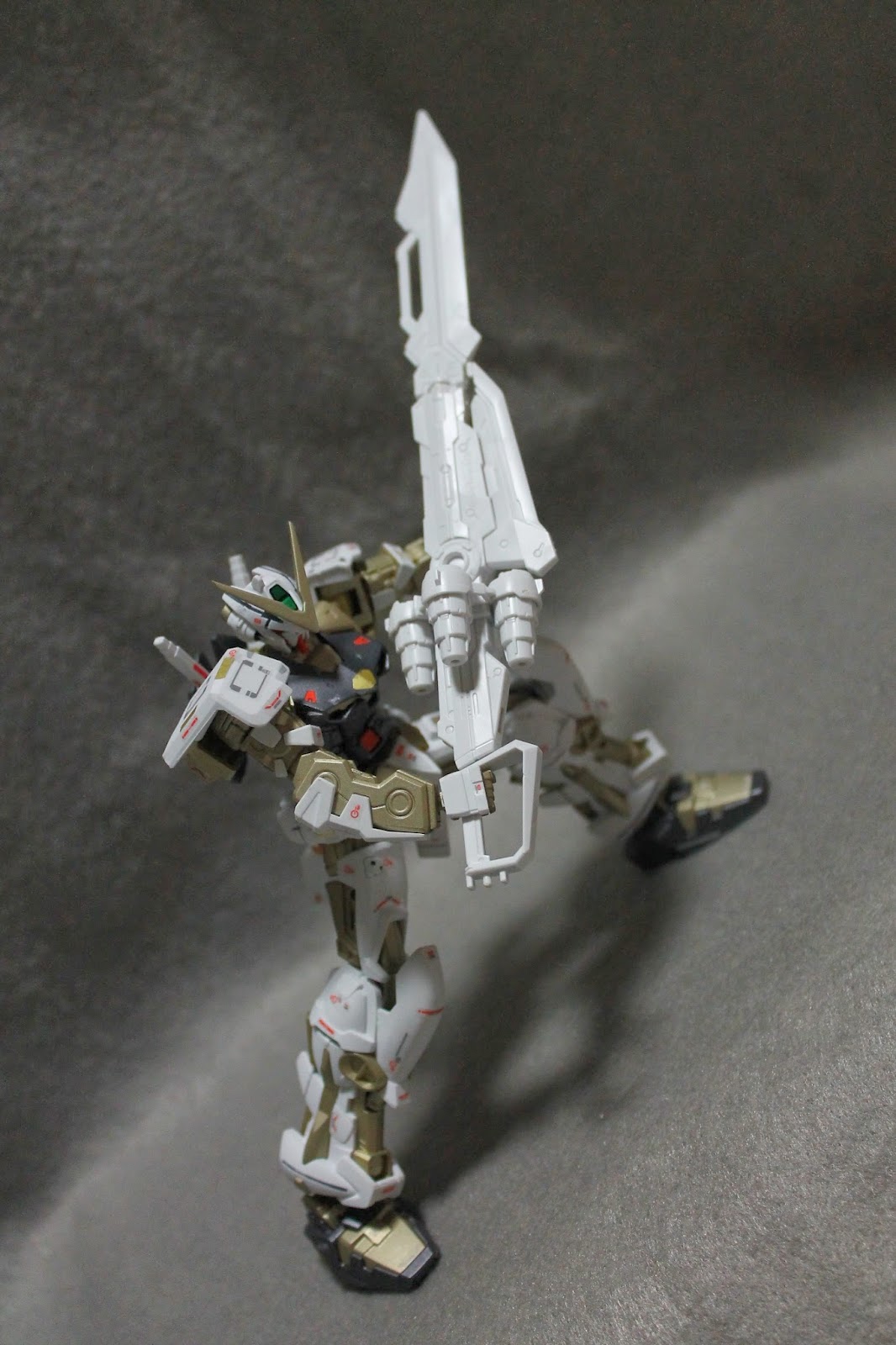 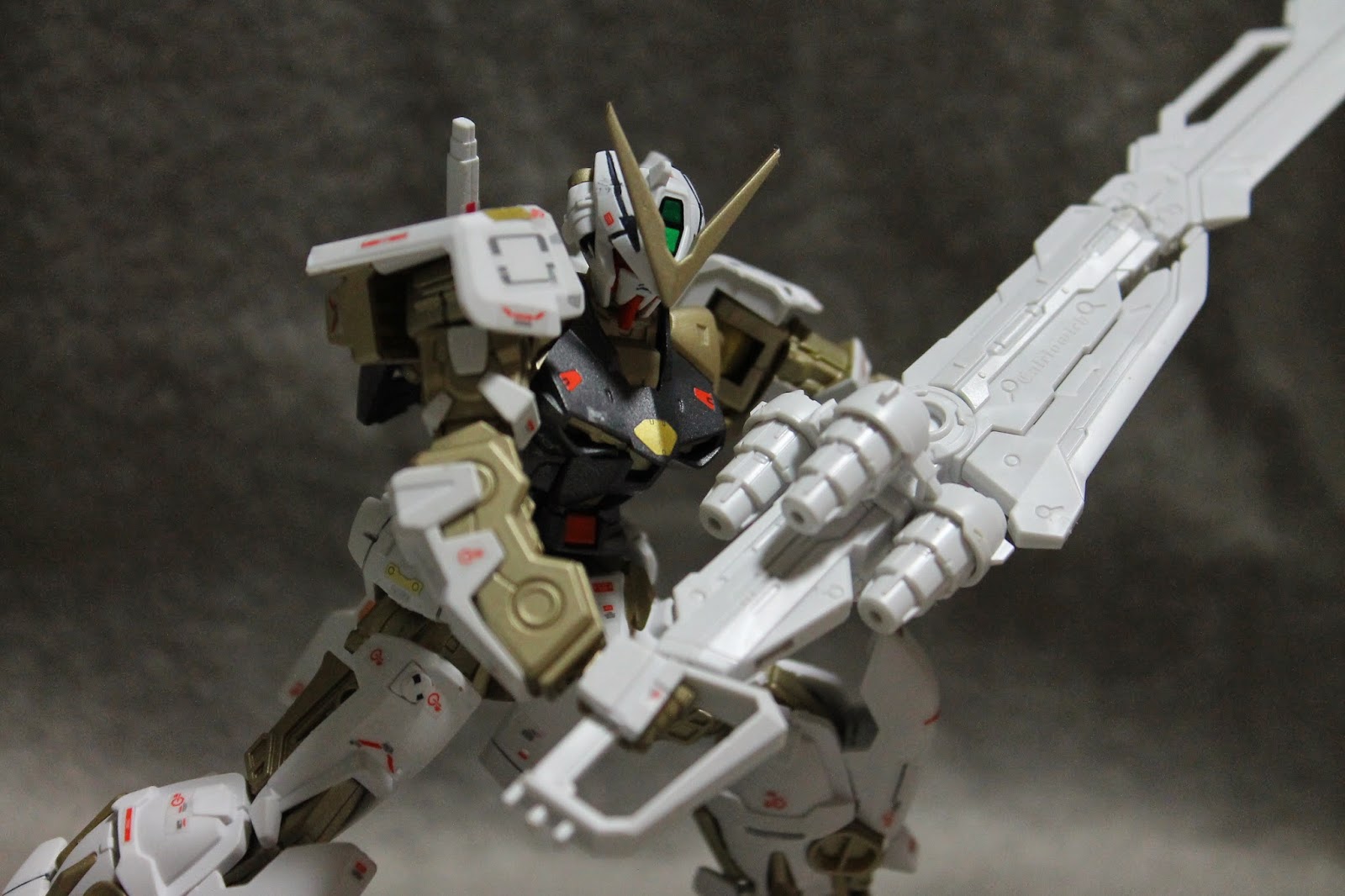 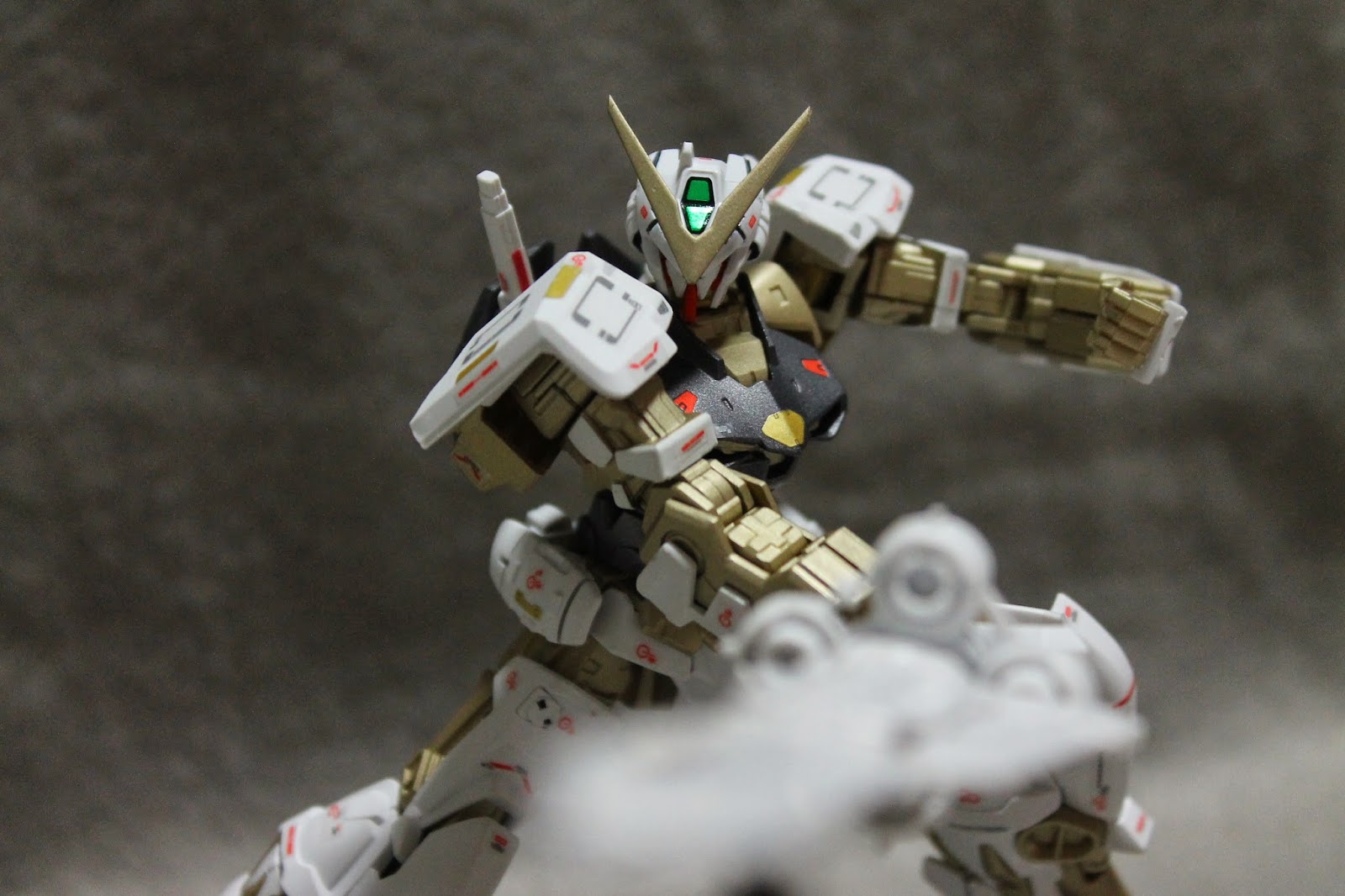 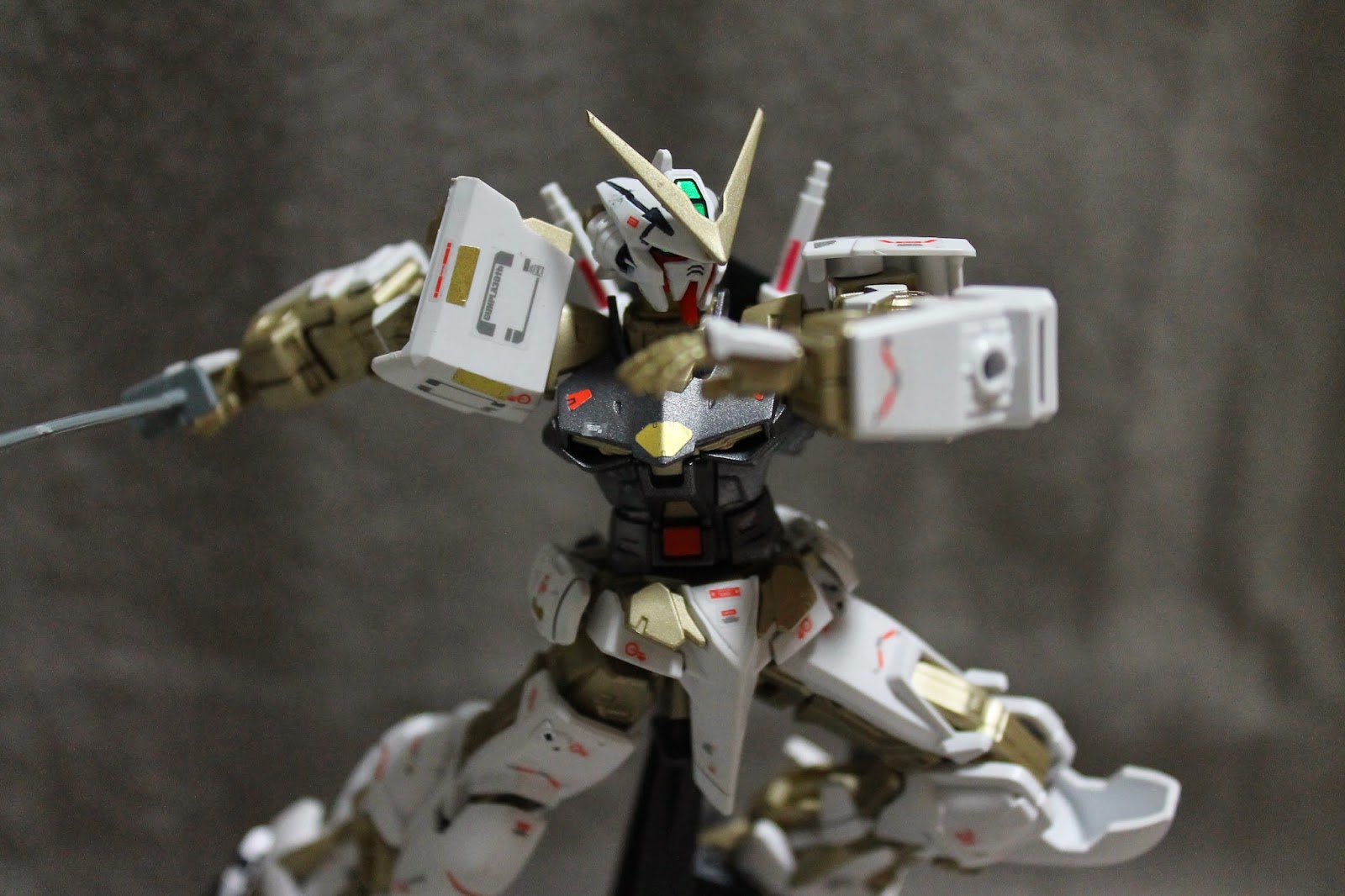 While a disappointment in the initial stage, the AGF turned out pretty well after heavy painting and delicate detailing. The next step is to acquire a flight unit for the AGF and do it up in its colours, and perhaps send this in as an entry into the Gunpla World Cup. 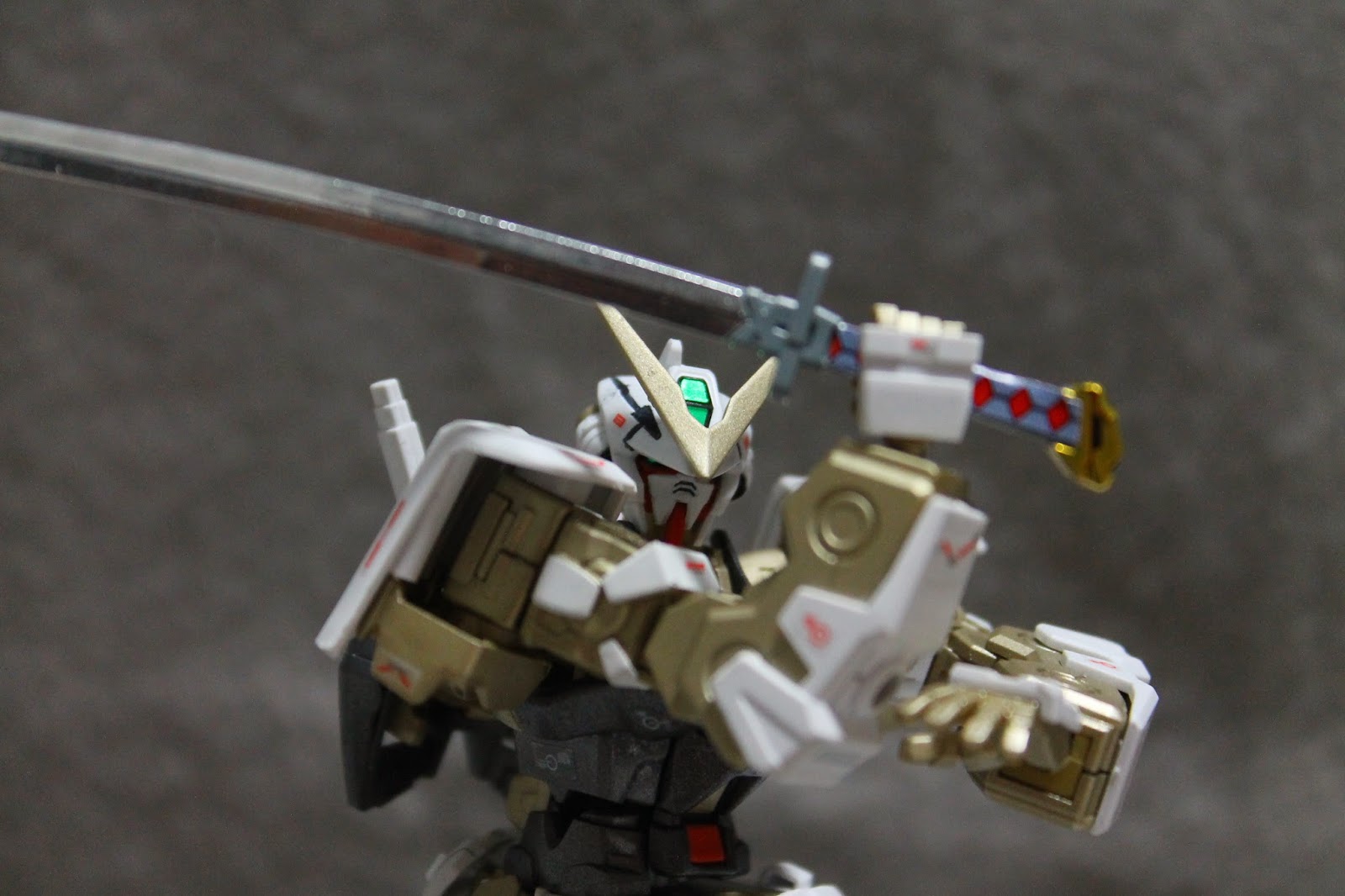 Then again, maybe not cos it is too damn nice now.
Posted by Gunplanerd at 12:43 AM