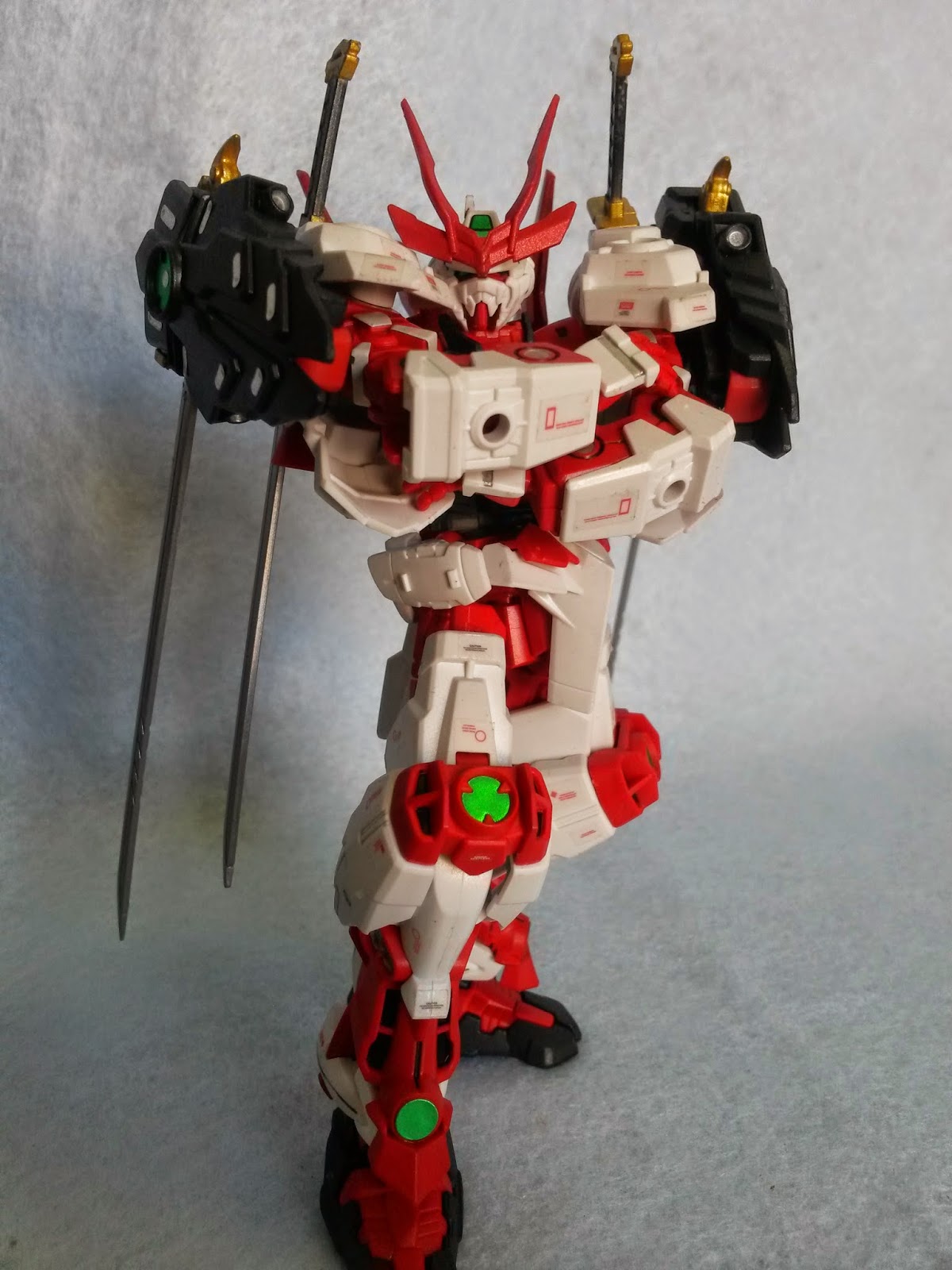 When the Sengoku Astray Gundam first appeared in Gundam Build Fighters, everyone sat up in their seats and took notice. The Astray is a wildly popular Mobile Suit design, spawning dozens of variants, custom works and modifications despite it existing only as a one-off animated short as well as in the immobile pages of manga volumes.

Therefore, it was joy to see an officially-sanctioned Astray modification released as a model kit.
Overview 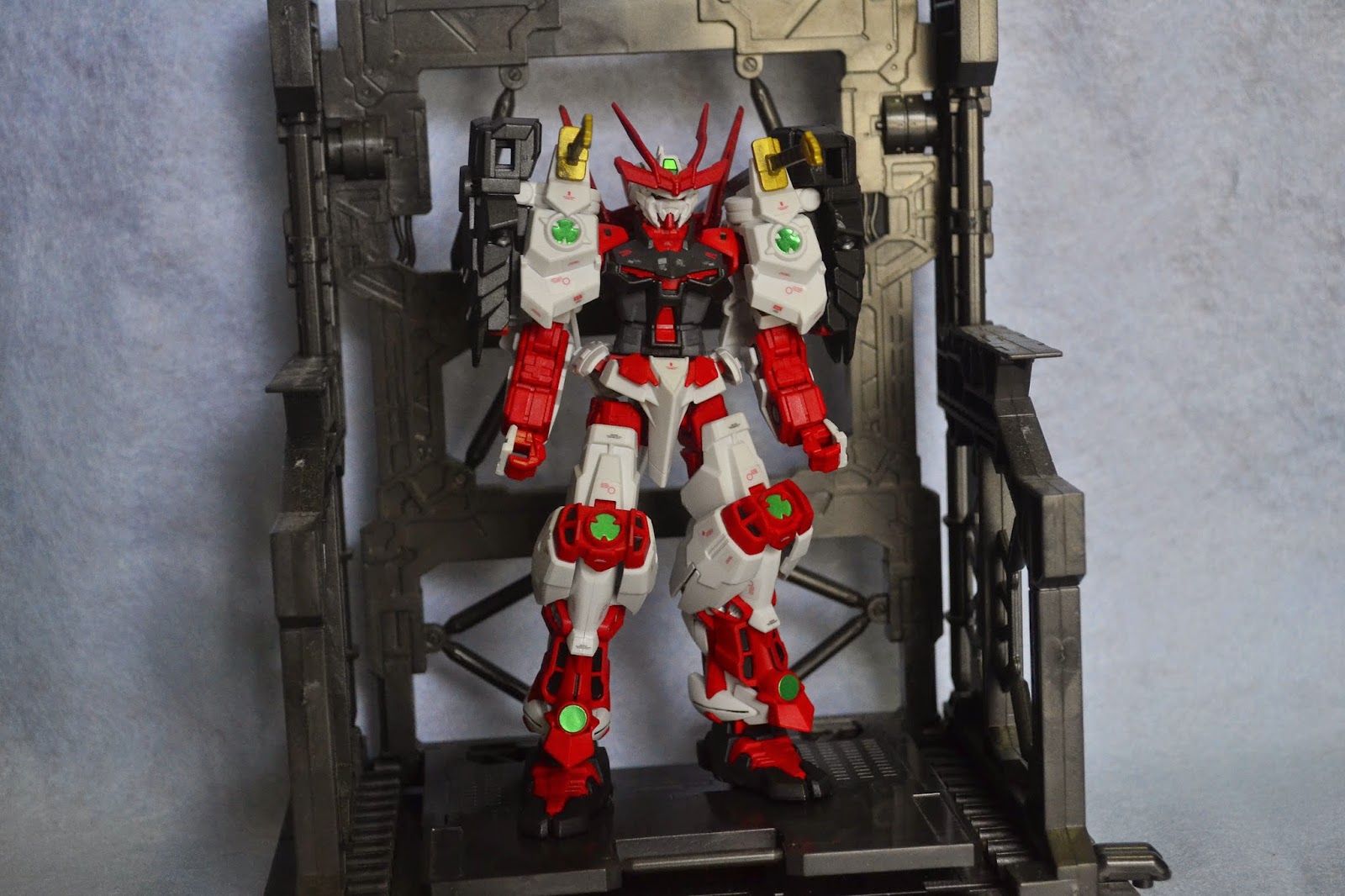 The Sengoku Astray is based on the Astray Red Frame, the most renowned prototype Gundam-style mobile suit developed by Orb during the first Bloody Valentine War. Custom-made by Early Genius Nils Nielsen, the Sengoku Astray rectifies a number of glaring design flaws in the original Astray, but keeps to its style as a melee-oriented fighter (although its ranged attack capabilities are also lethal). 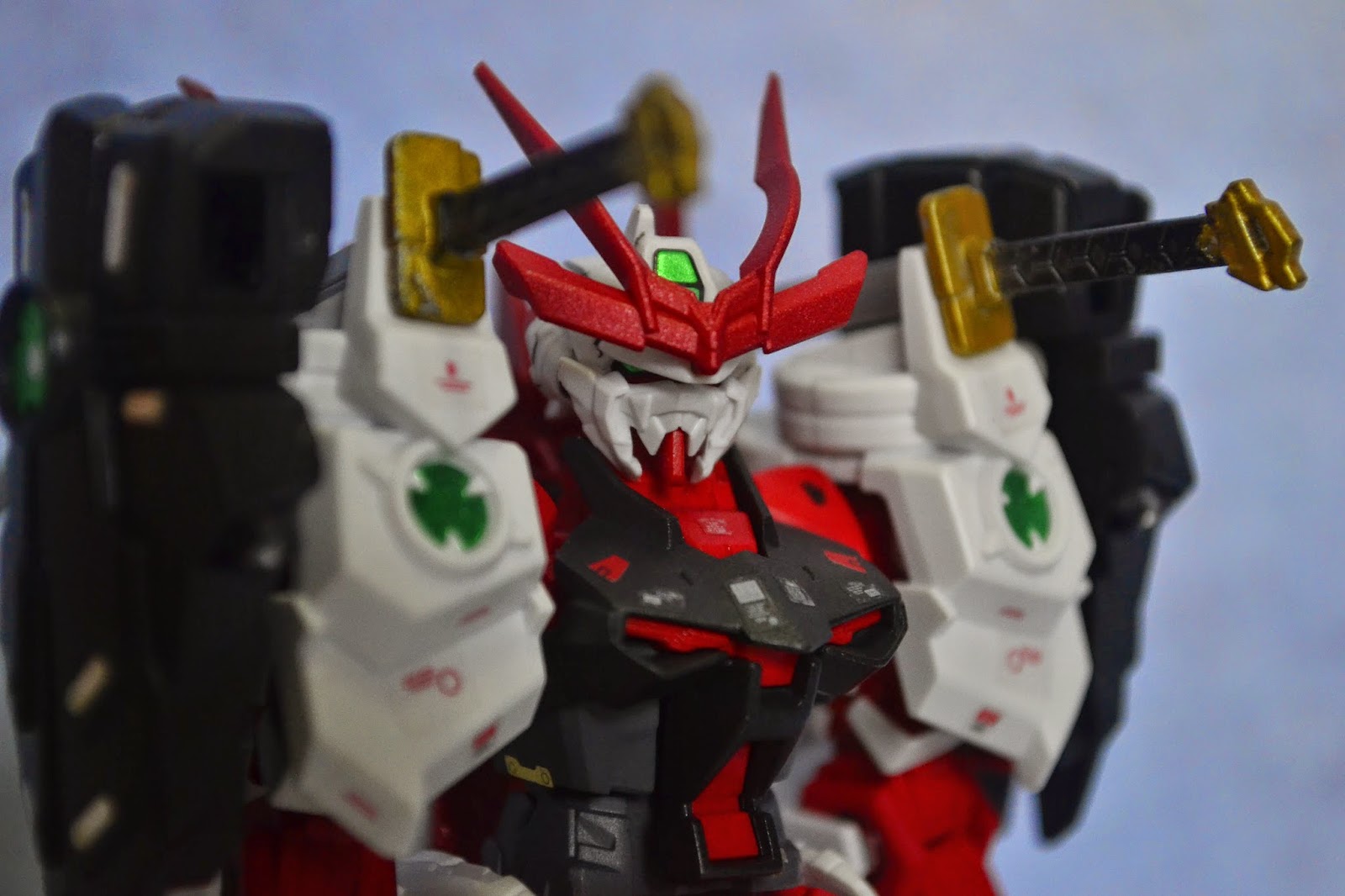 One of the most apparent changes Nils made is to the V-Fin. From the standard two-pronged V-Fin that adorns the head of most Gundam-types, the Sengoku Astray sports an ornate, engorged V-Fin that invokes images of the Samurai. Basing off his Japanese heritage from his mother, Nils sought to make the Sengoku Astray as Japanese as possible, while incorporating cutting edge technology from his American side. 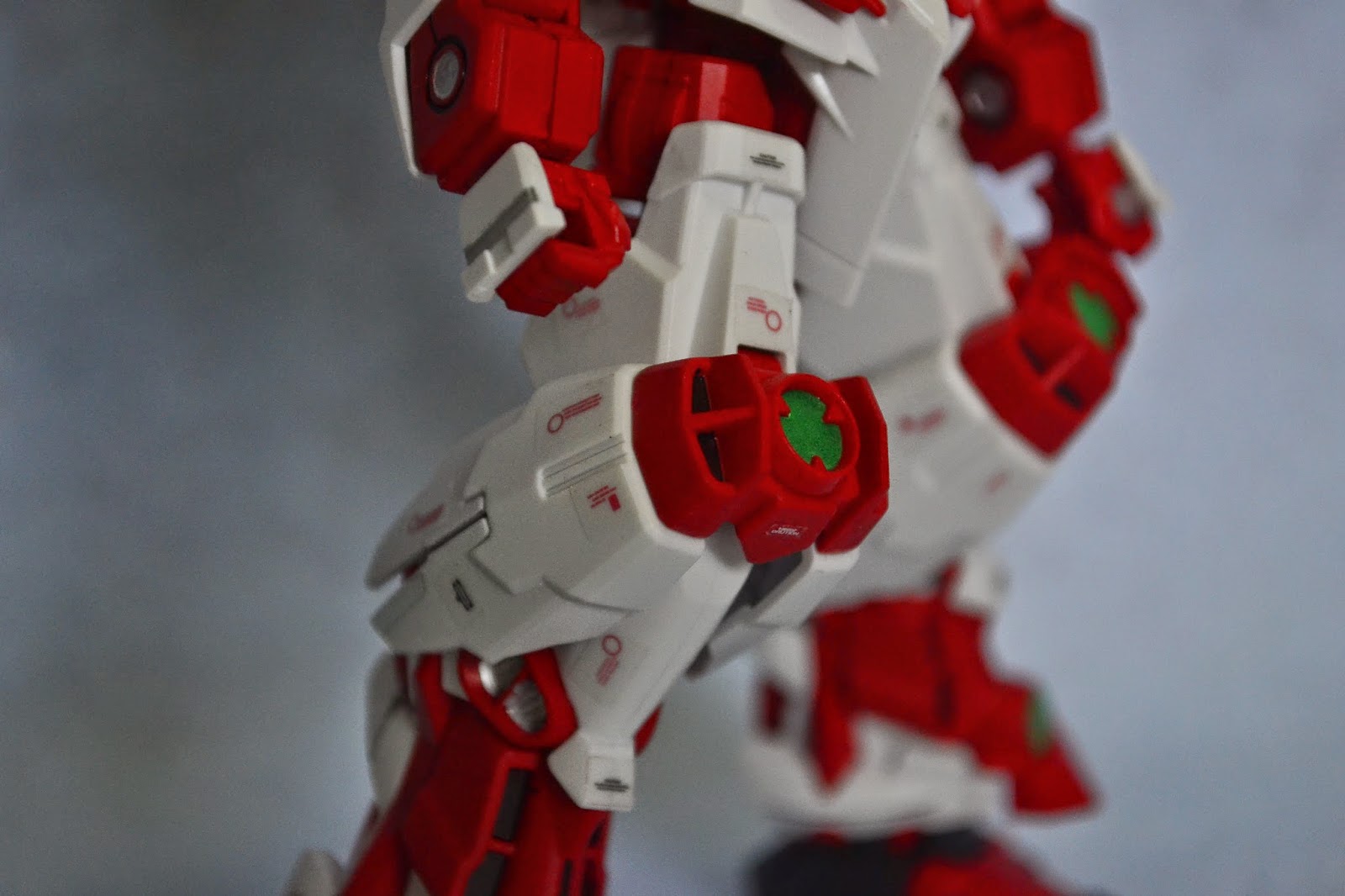 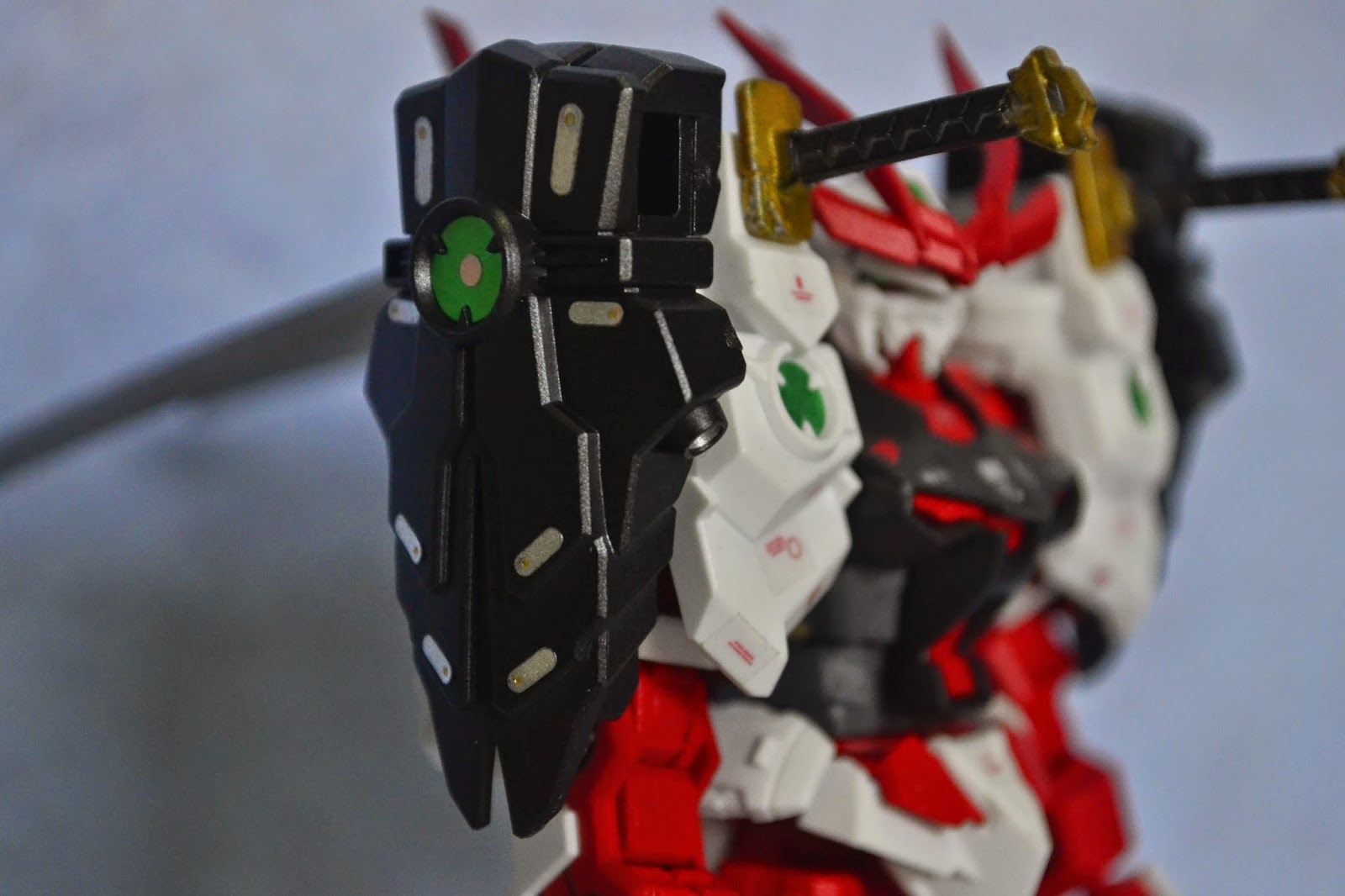 Another update to the original Astray design is the addition of additional armor to the shoulders and knees. The original Astray was built to be nimble and agile, and heavy armour was shed in order to achieve this specification. This made the Astray lean but also fragile, as a well-placed shot to any of its underarmoured sections could result in catastrophic damage. Nils added the armour to the sections most prone to being fit, resulting in a heavier, bulkier custom Astray. 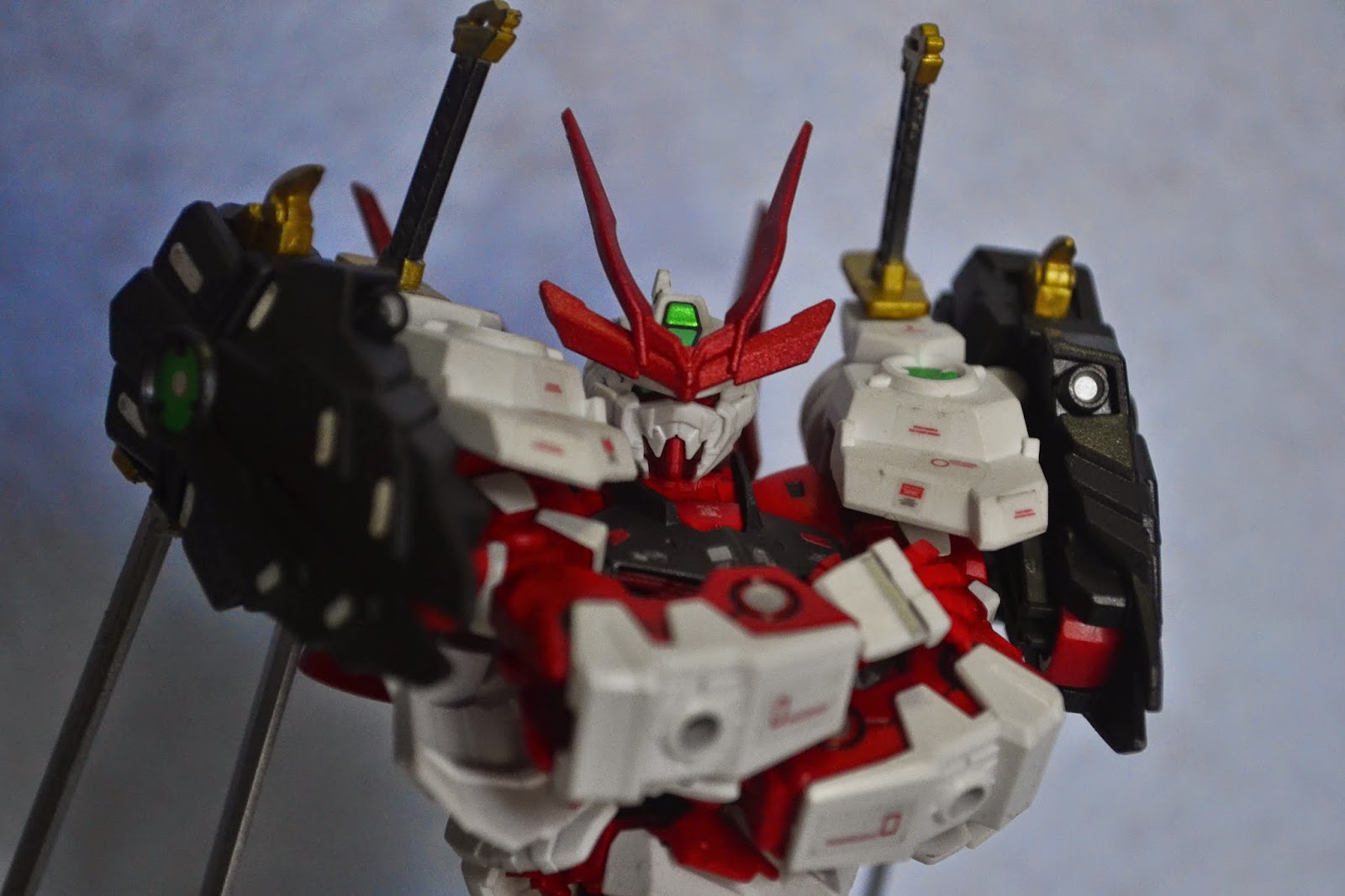 The colours used for this customisation were in a word, basic. I just wanted to update the colours of the Sengoku prior to fitting, but I also wanted to apply a second tone of red to the overall kit. Thus, the following colours were used: 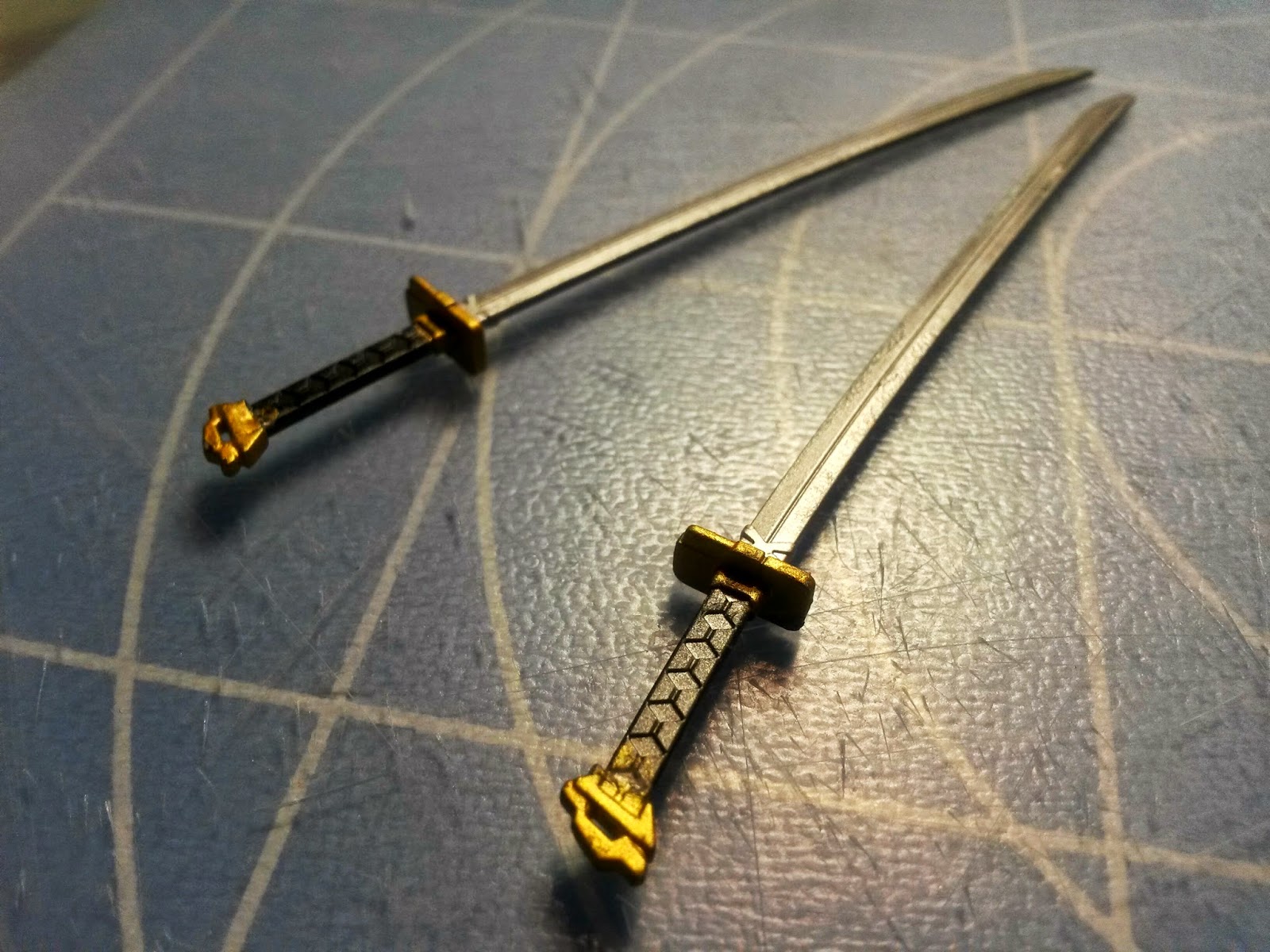 One let-down for the kit is the null colour of the Astray Katanas, ostensibly the primary weapons for any Astray unit. Molded in a plain white, the colours are achieved by four pieces of foil stickers, one for the handguard, one for the sword grip and two for each side of the blade. This leaves the middle section of the blade uncovered, which irks me more than anything else.

In an attempt to remedy the situation, I decided to paint the katanas instead of using the stickers. Drawing inspiration from a die-cast MG Astray Katana, the colours were decided to be gold for the handguard and hilt, metallic black for the grip and gloss aluminium for the blade.

It was an exercise in patience as I had to mask, unmask and remask parts of the tiny-ass sword before I got the colours right. Thankfully, the colours came out well, although blemishes still exist. 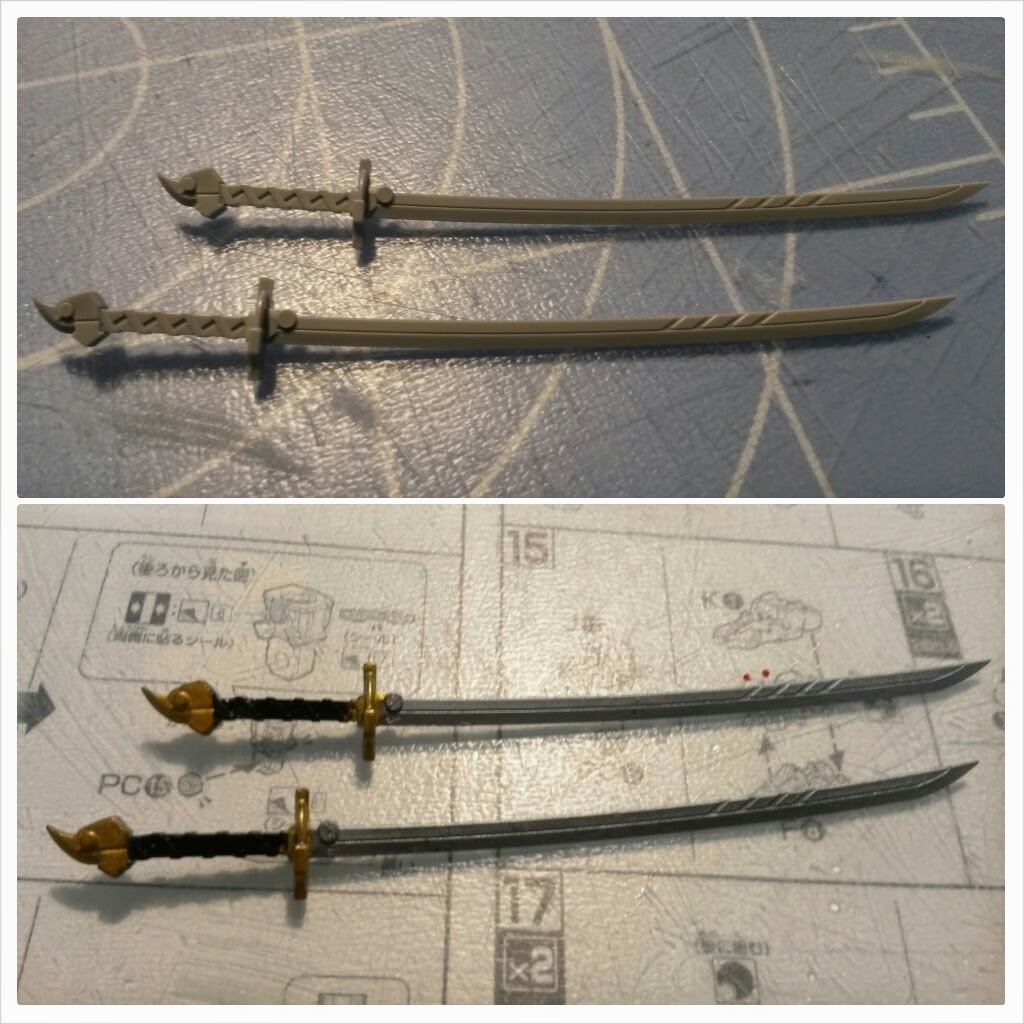 Realising that my Astray wouldn't do with just two swords, I applied the same paint job to the katanas found in the new HD Builders' Parts - MS Launcher 1. Again, I repeated the arduous process and wound with two beautiful blades, ready to be wielded by the now-named Sengoku Astray Gundam Full Blade. 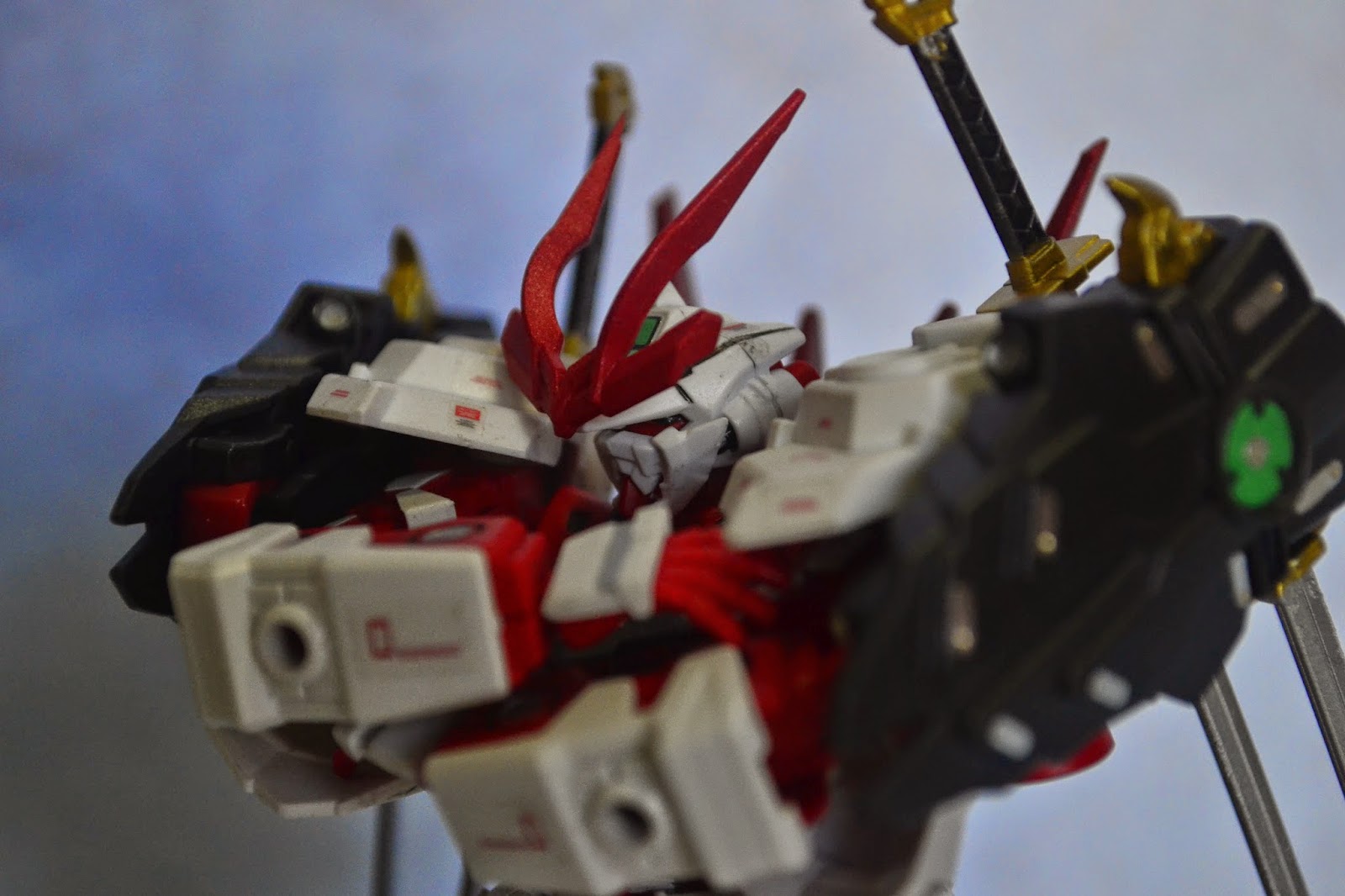 Since it reuses the same mold from the Astray Red Frame, the level of detail is more or less equal. Astray kits are quite detailed to begin with, so a little panel lining here and there served to bring out the details even more.

However, the large armor pieces for the knees and shoulders are rather plain, being just enormous pieces of white and red. Thus, the RG treatment was bestowed to the entire kit, although the number of decals placed on the Sengoku Astray is lower than the usual amount I do. 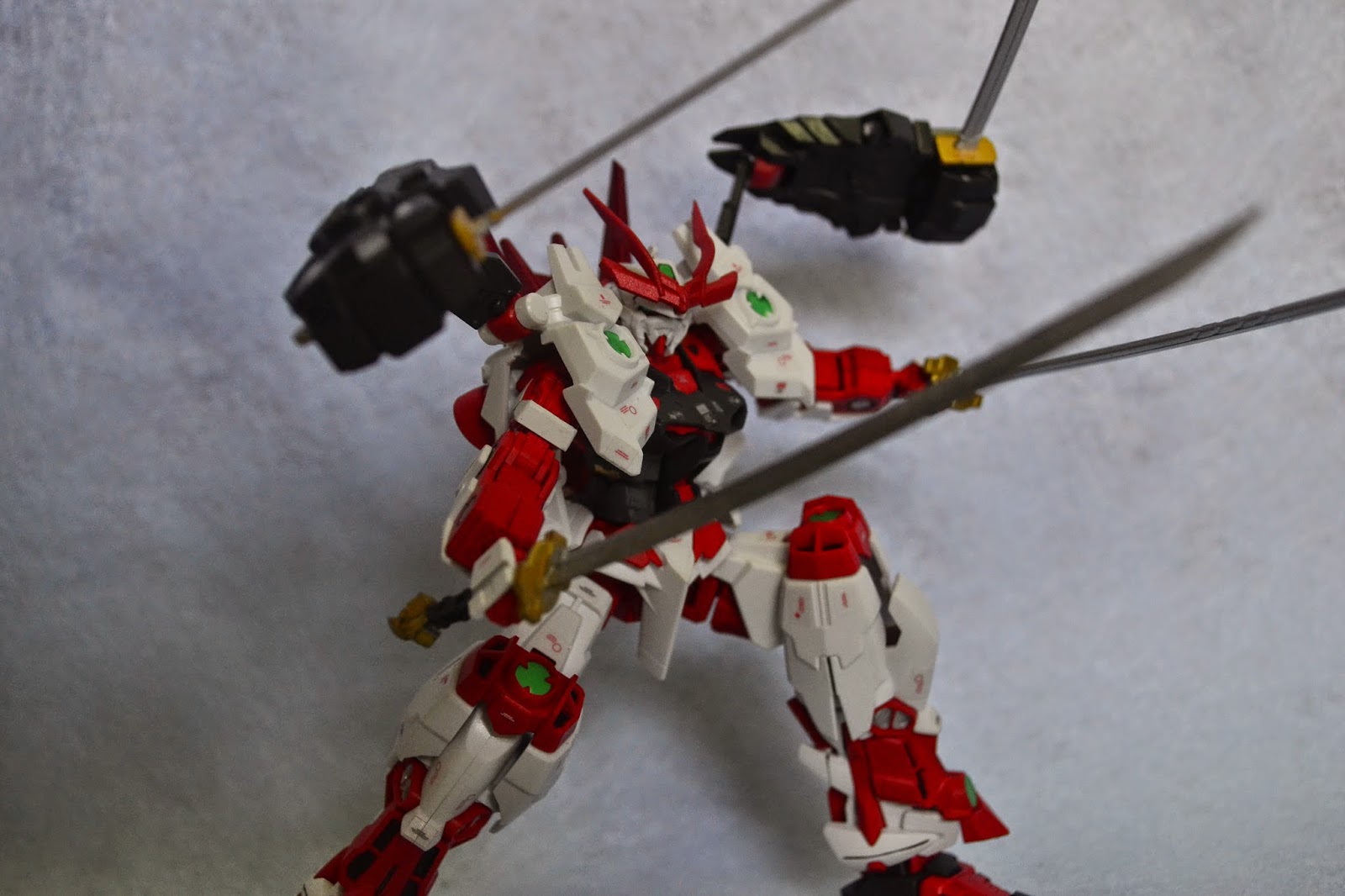 One gripe with the Sengoku Astray is the inhibition of motion resulting from its new shoulders. They are large and bulky, hindering the kit's range of motion to a certain degree. Also, the arms have difficulty rotating in the shoulders, resulting in arms that pop out from time to time. 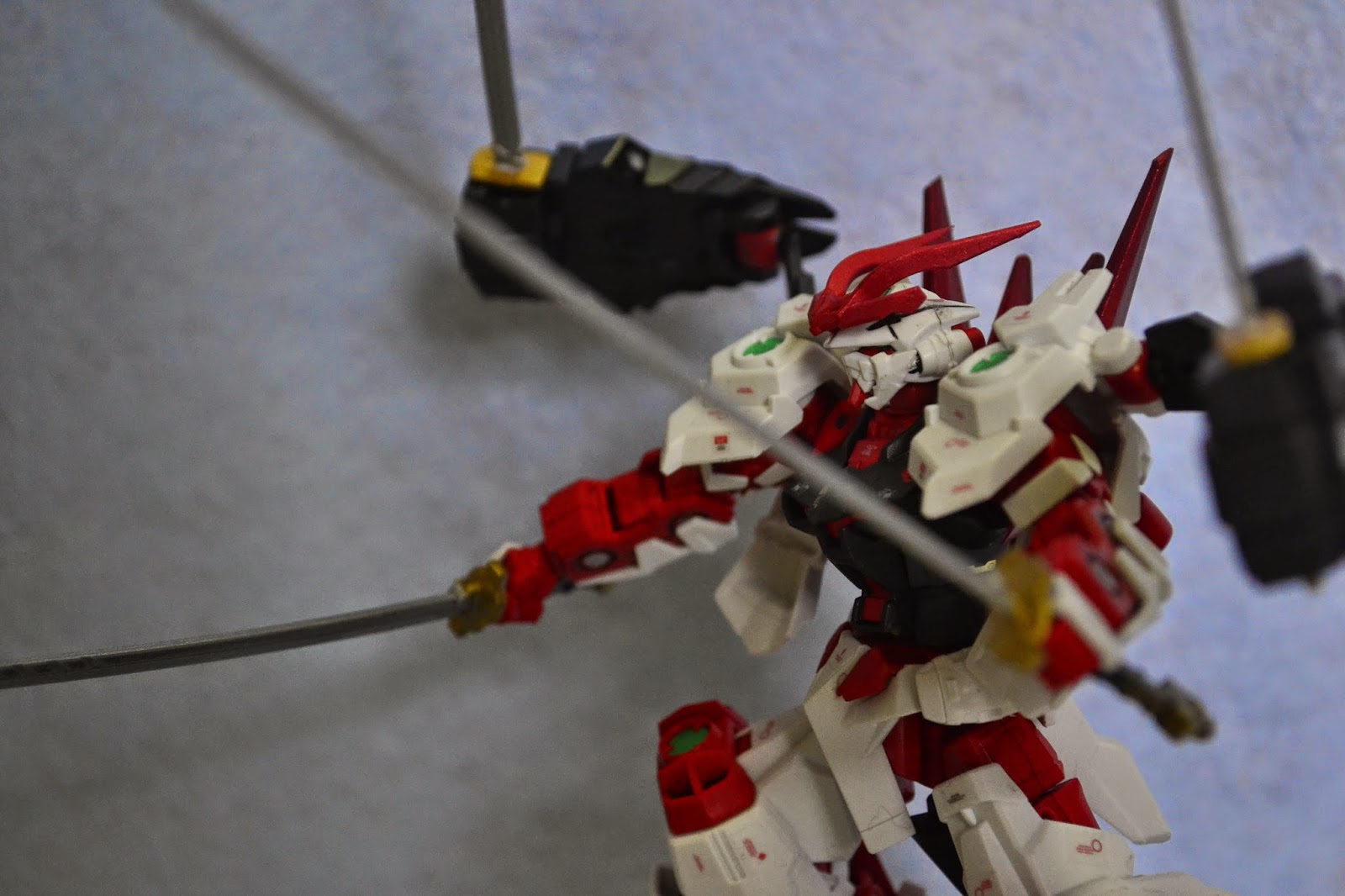 The legs however, have no such issue. The new knee armour is flexible and mobile enough to accommodate most of the Astray's poses, but getting them into the thigh peg would take some inexplicable trial and error. 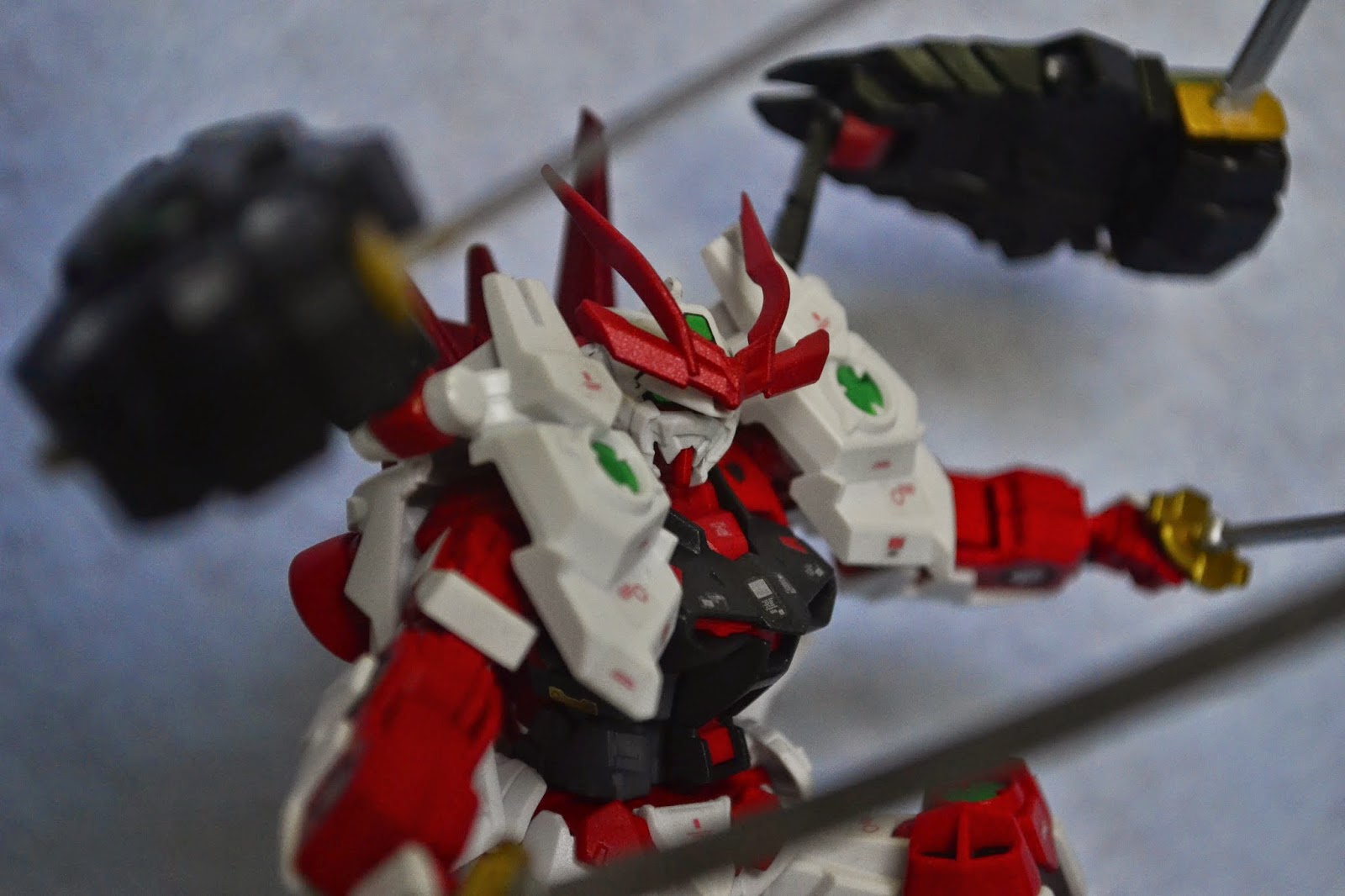 The Sengoku Yoroi, the black parts of the shoulder armour that fold out to become manipulators, are able to manage an impressive range of motion. The katanas also sit securely in those hands, without fear of them dropping or loosening with time. 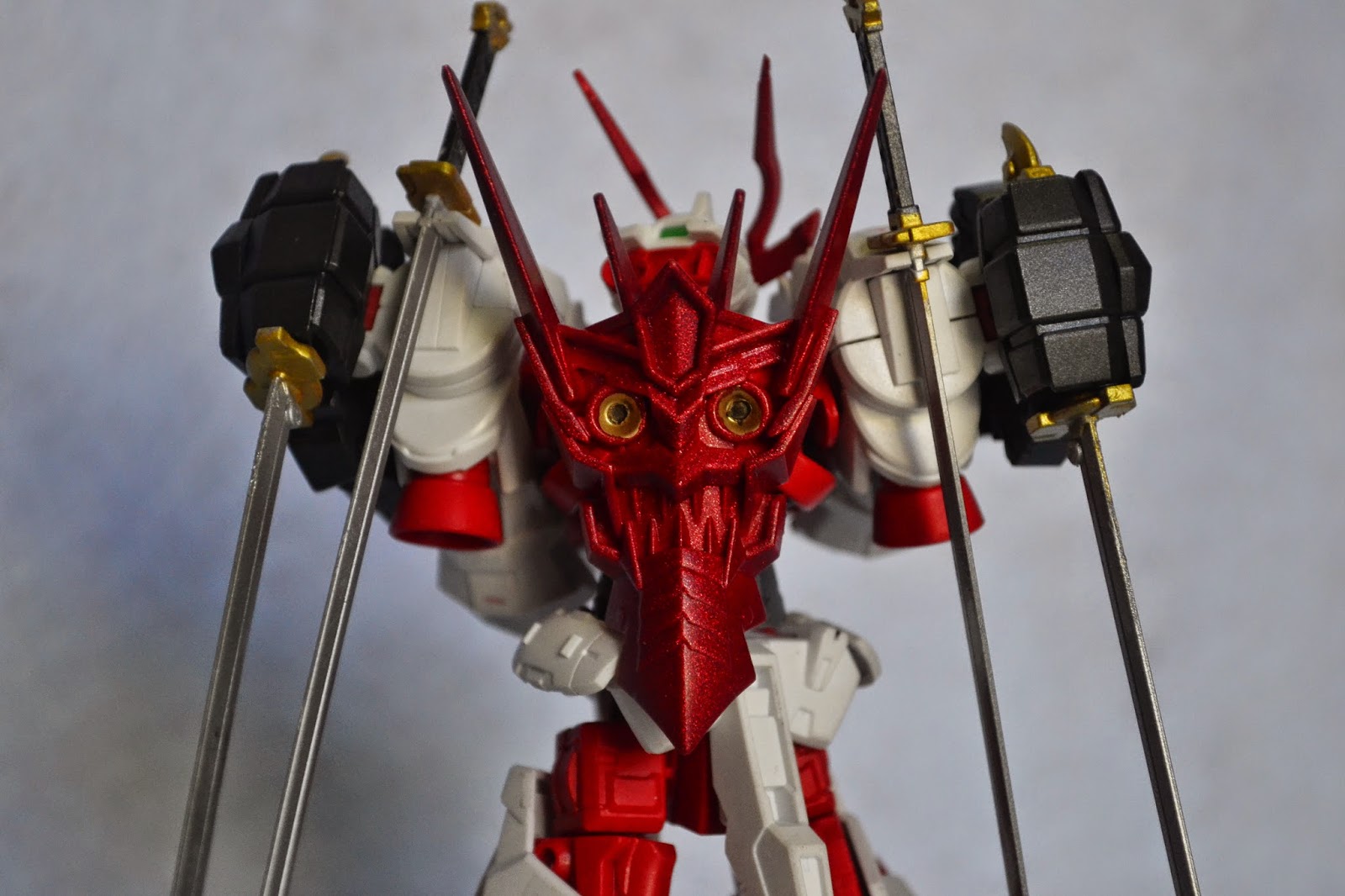 The Sengoku Astray comes with its two swords and the Oni No Tate, the demon-styled shield mounted on its back. It also comes with two Astray beam saber hilts, leftovers from the previous mold. 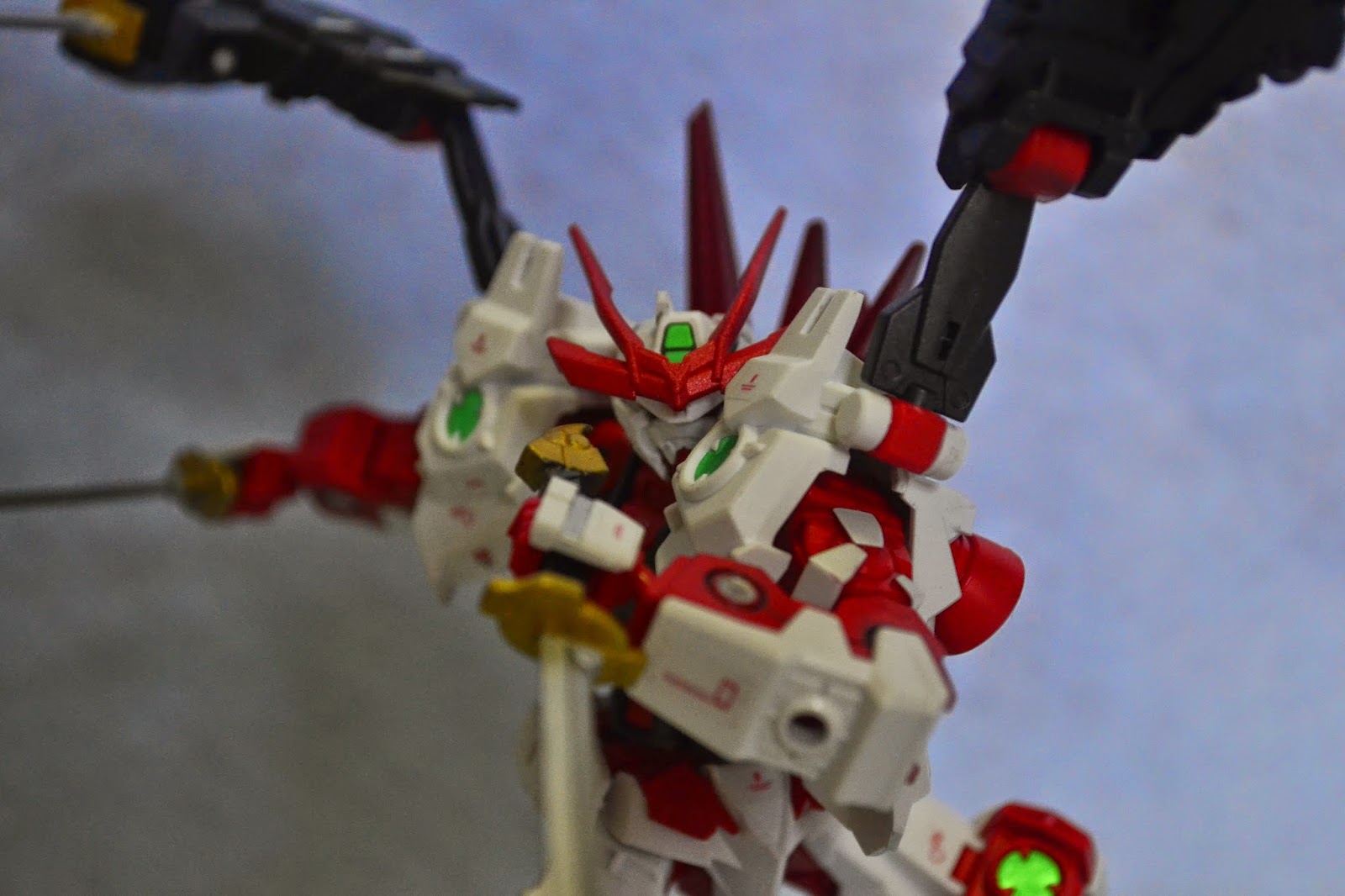 The Sengoku Astray Gundam is a beautiful addition to any Astray collection, but some work has to be done to the swords in order for it to shine better. 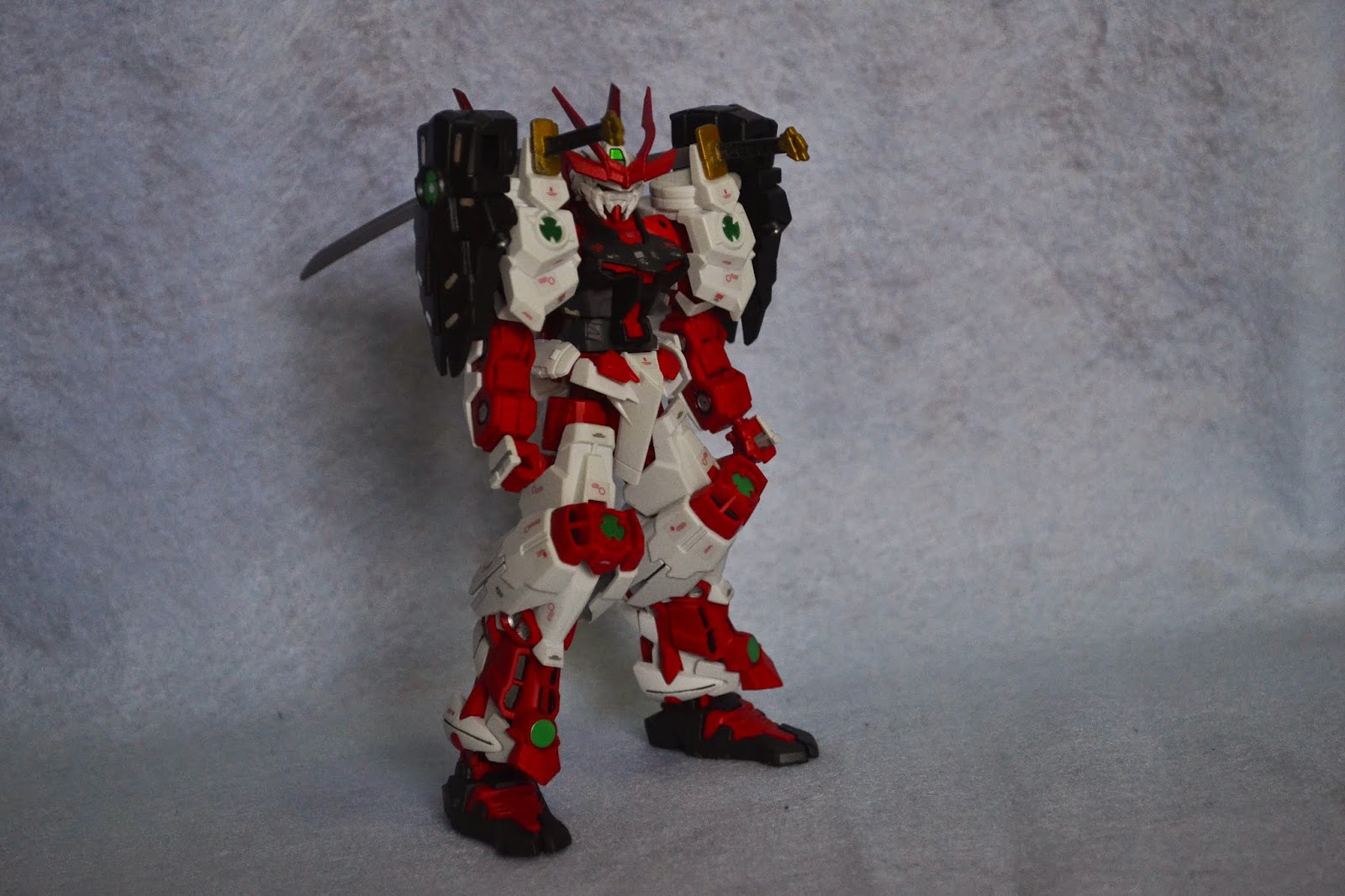 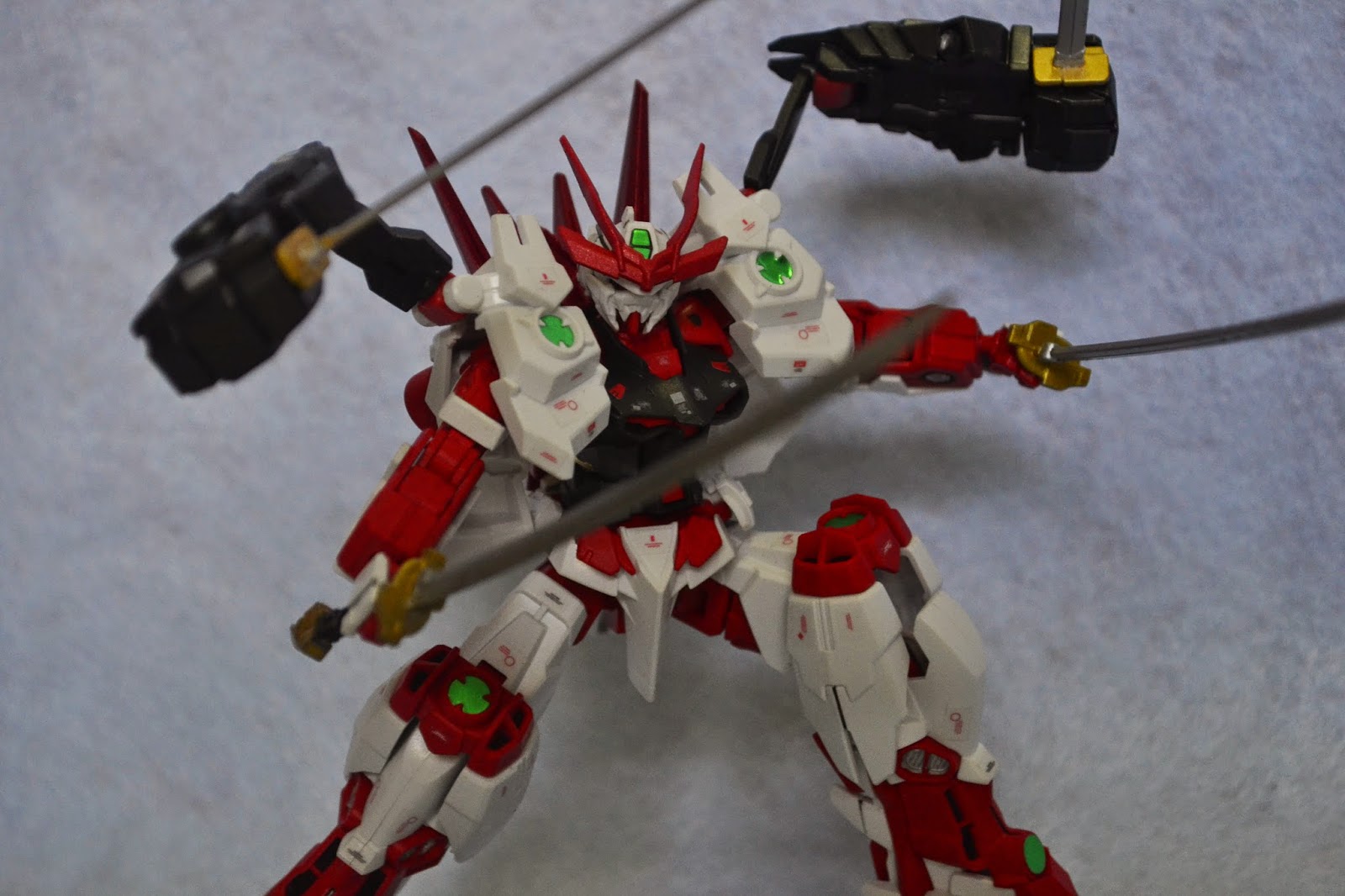 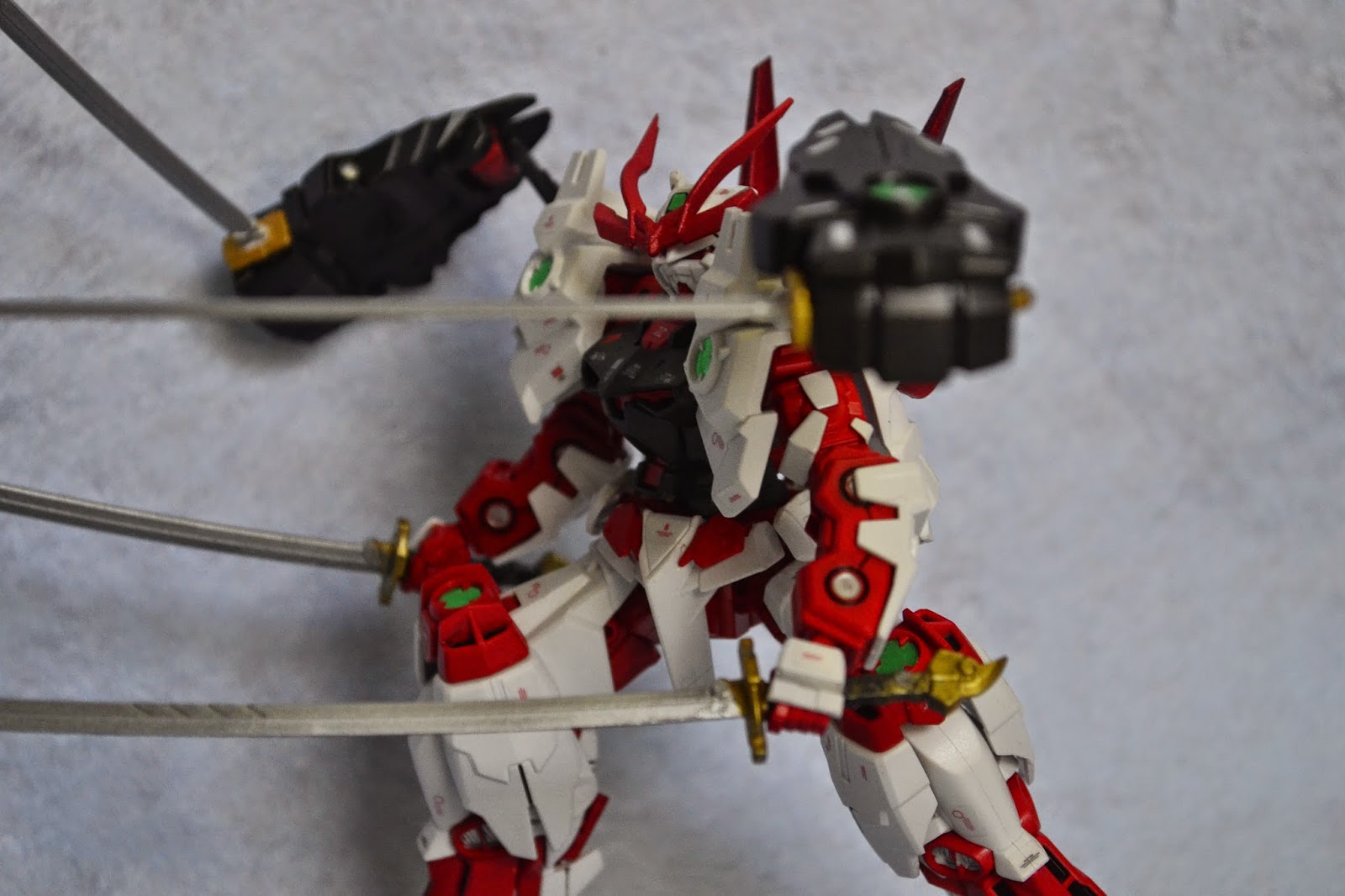 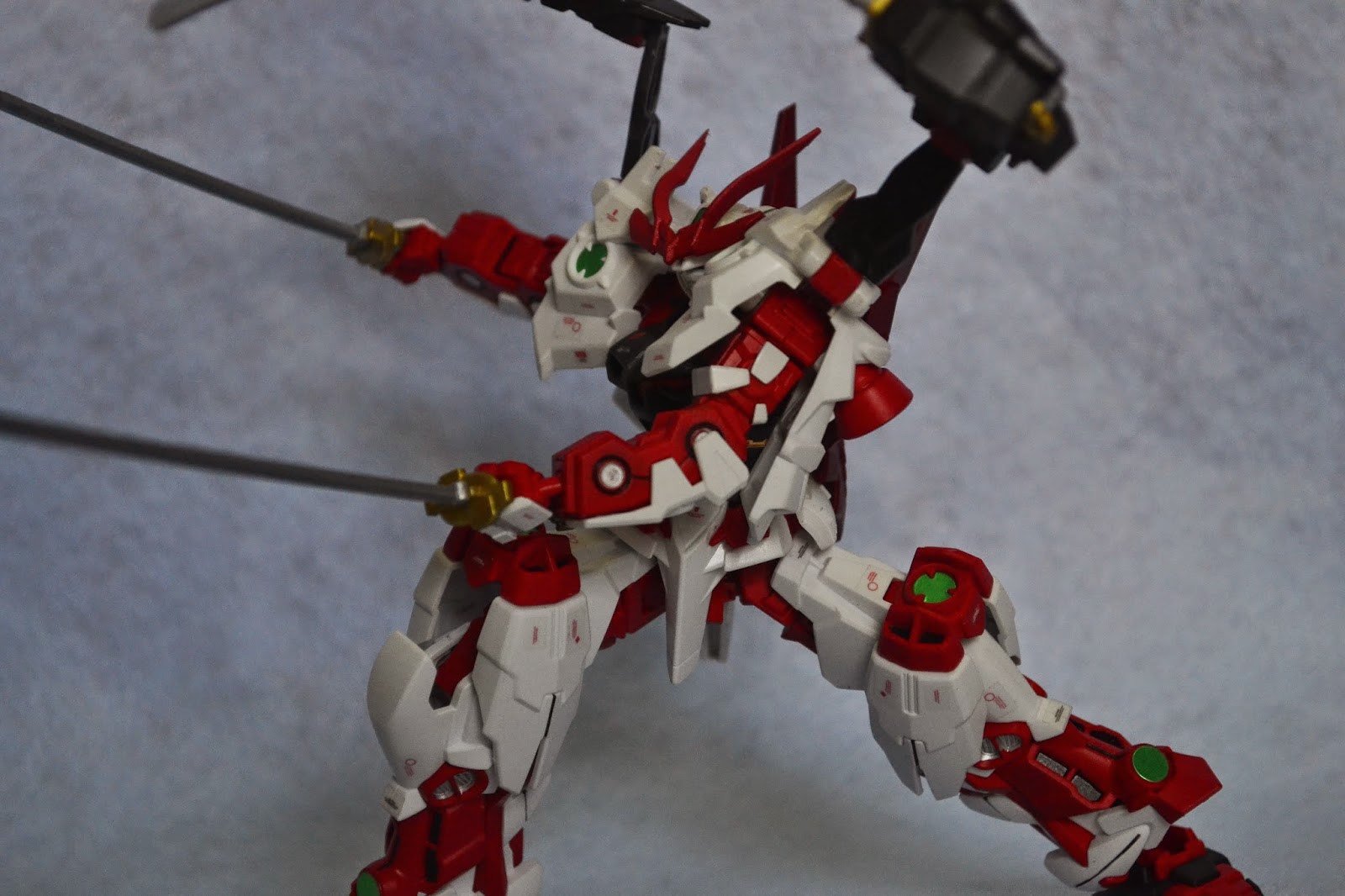 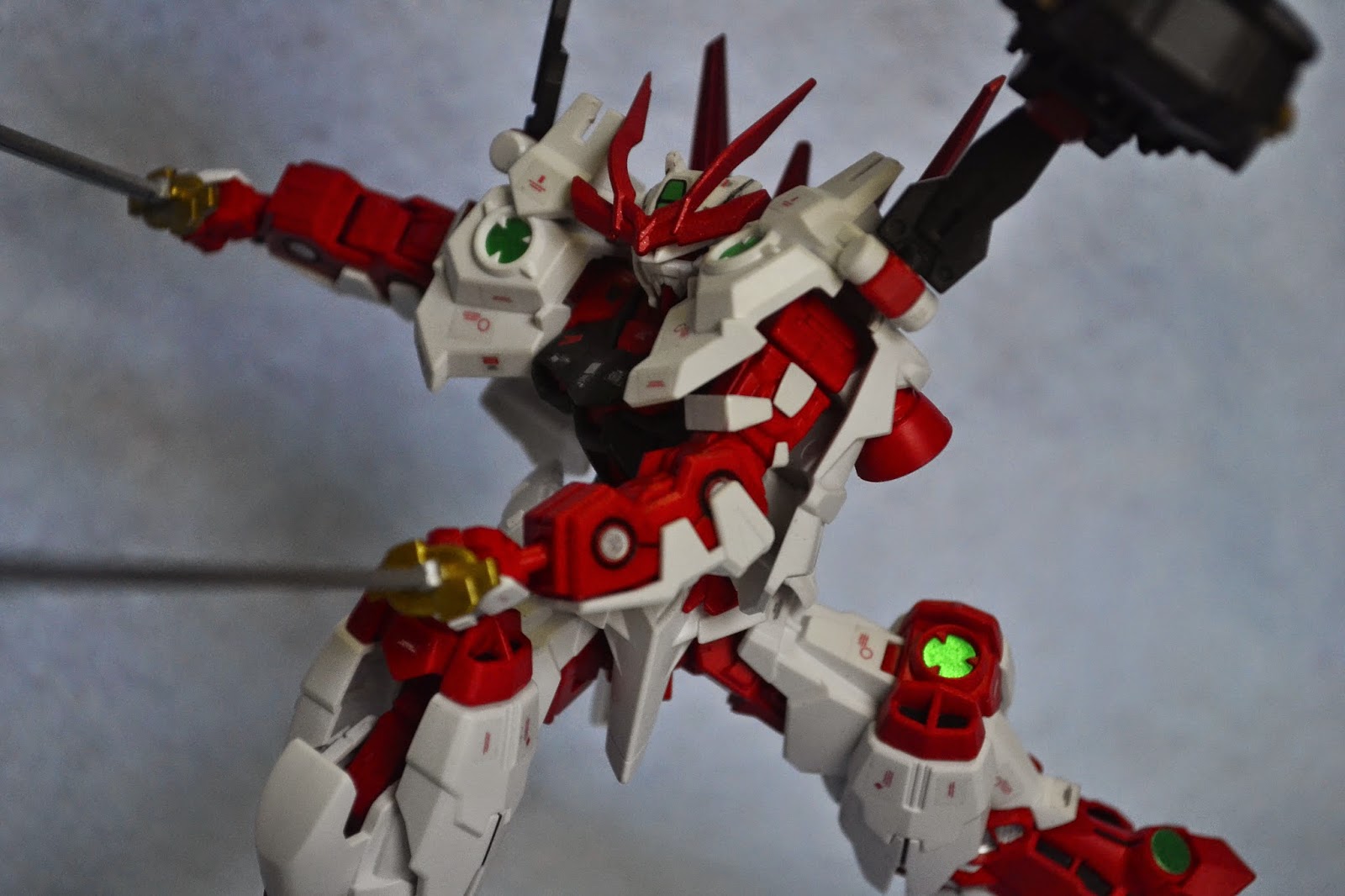 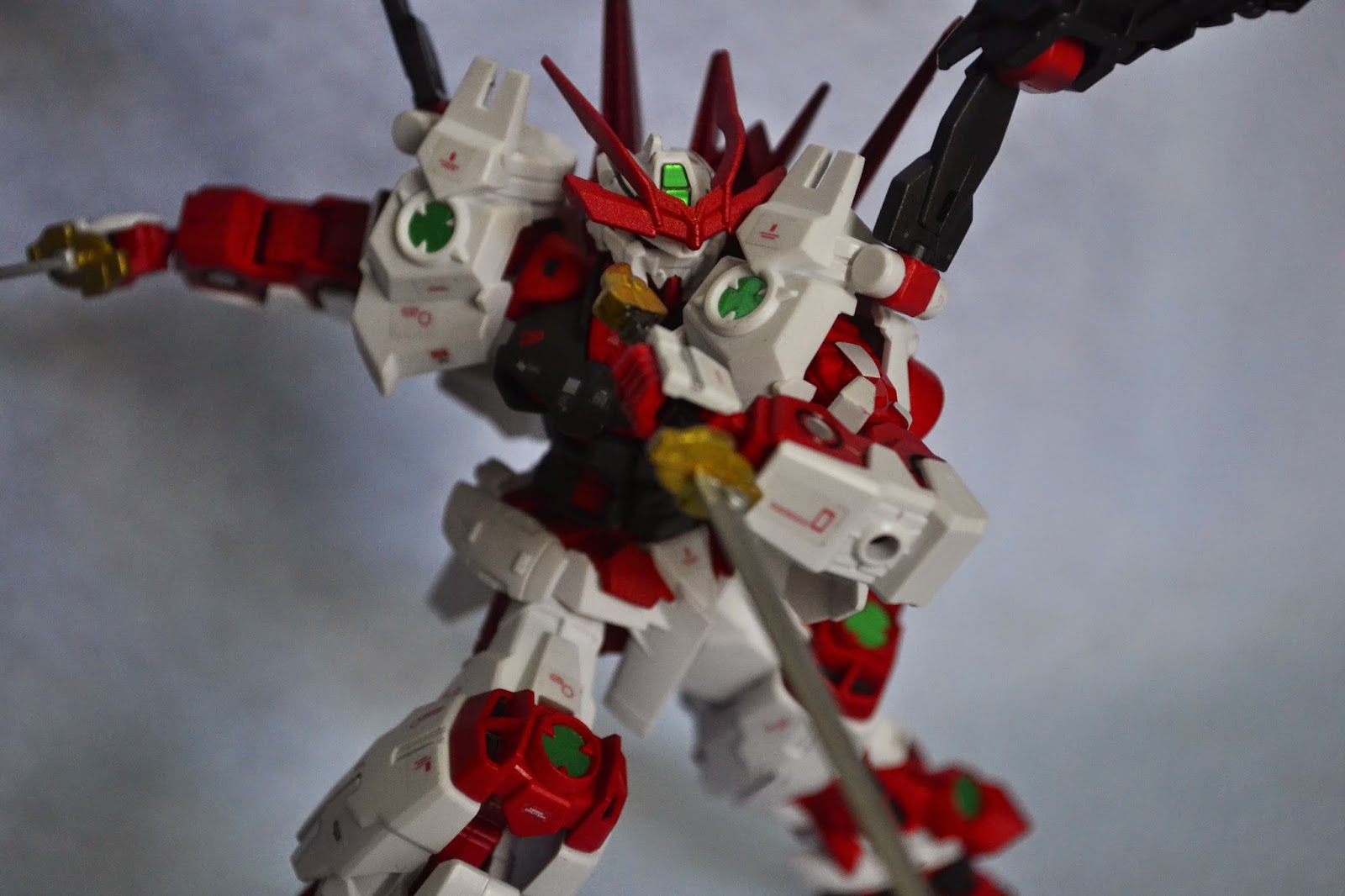 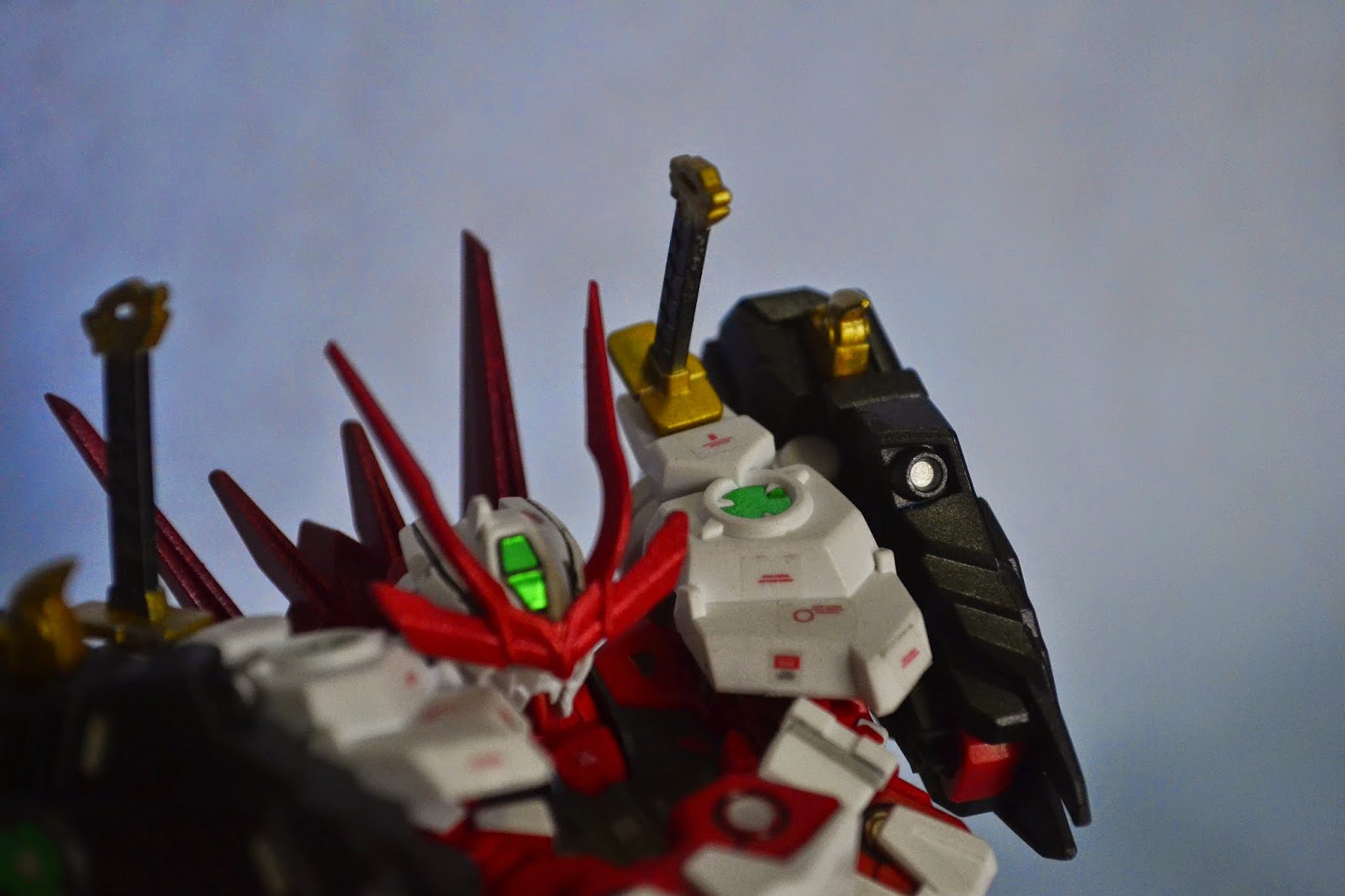