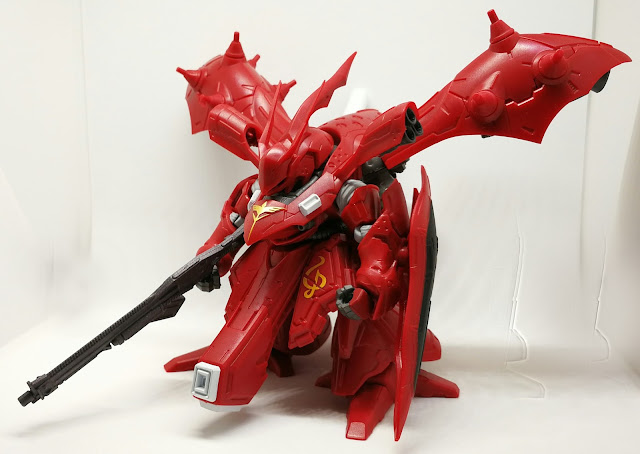 
NX Edge Style completed figures give Bandai/Tamashii Nations/Sunrise the perfect excuse reason to release mobile suits in another format to claim an even bigger share of your wallet's contents. This line of figures is actually pretty decent: good detailing, great articulation and a generous lineup of figure options that are quick to release! Therefore, to some hobbyists, the NX Edge Style series represents a nicely-carved niche in the hobby space, giving them a solid, well-made figure that is able to be displayed without spending hours of their lives building it up.

The Nightingale however, isn't one of these solid, well-made figures. In fact, it's pretty awful especially for its lofty price tag (thankfully I got mine at a 60% discount and only after using a cash voucher to further offset the nutcase cost).

For the most part, the Nightingale looks pretty good, with those huge binders carved into satisfying organic curves with great mechanical detailing and panel lines. The head sculpt is fantastic as well, successfully carrying over the sinister look of the Nightingale into the NX Edge Style format. The package itself is actually quite robust, loaded with a bundle of accessories that includes the Nightingale's main weapons (beam rifle, shield, beam saber), a clear NX Edge Style display base, deployed funnels as well as the effect parts to display said funnels on the display base.

Among other things, the NX Edge Style line is most touted for the figures' articulation and mobility, being able to strike dynamic and fluid poses thanks to their prefabricated joint parts. Imagine a SD model kit with knees that can bend; this opens up a whole new world of posing for junkies like me. Sadly, the Nightingale isn't up to par in this regard. While it can still pull off a decent number of poses, the many components frustratingly fall off the main body way too often. The main offenders are the huge and heavy rear skirt armour, the lower legs and the booster tanks attached to the backpack. It's strange that for the design team to use such inadequate connection points and joinery systems for what can be easily considered crucial parts of the entire figure, with the sliding connector for the rear skirt armour failing to do its only job. The heavy piece comes off way too easily: just leave it there and let gravity do the work: it will slide off eventually. The lower legs are also inexplicably loose, which is a shame as they are able to do full bends at the knee. Similarly, the long booster pieces are "secured" via an insecure tab-based connection and a light flick of the finger is enough to send the boosters into orbit.A little Pledge Floor Care would probably solve these issues but it's just strange that more care wasn't given to these aspects of the figure.

As with most renditions and iterations of the Nightingale, the NX Edge Style version is best displayed in the most vanilla pose: standing tall. 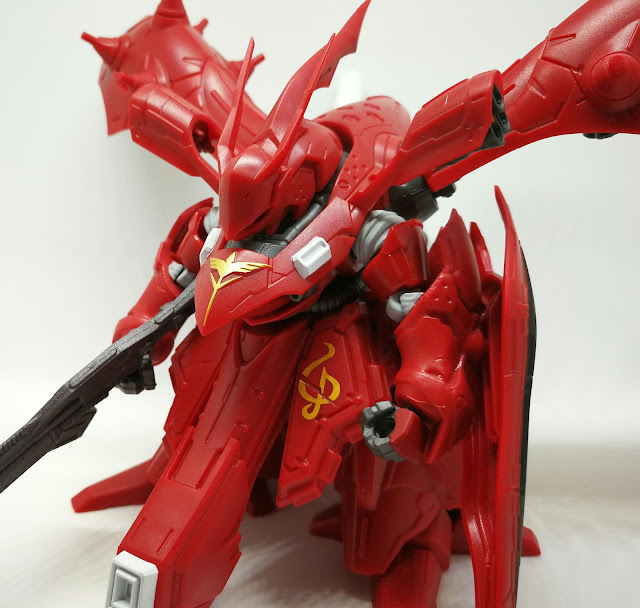 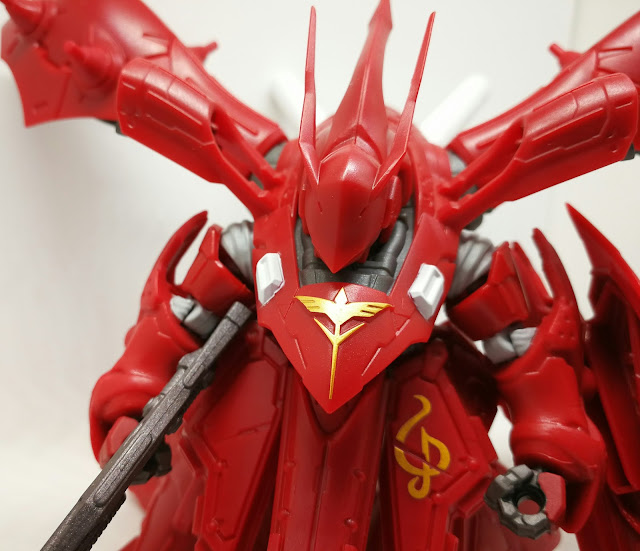 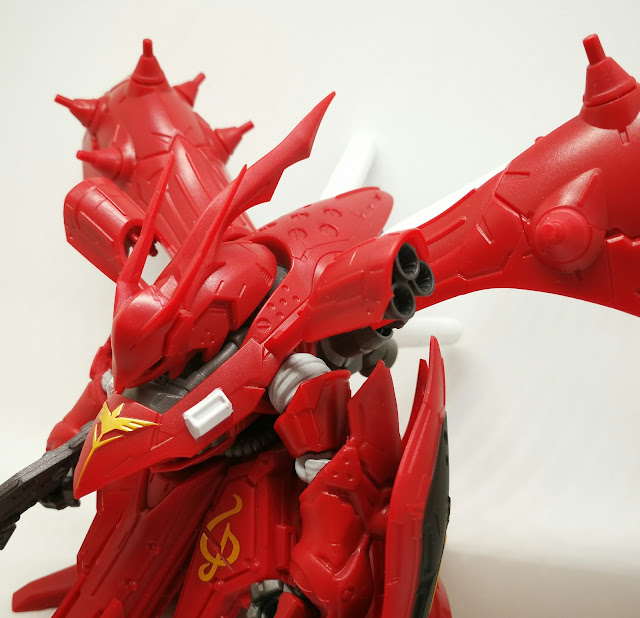 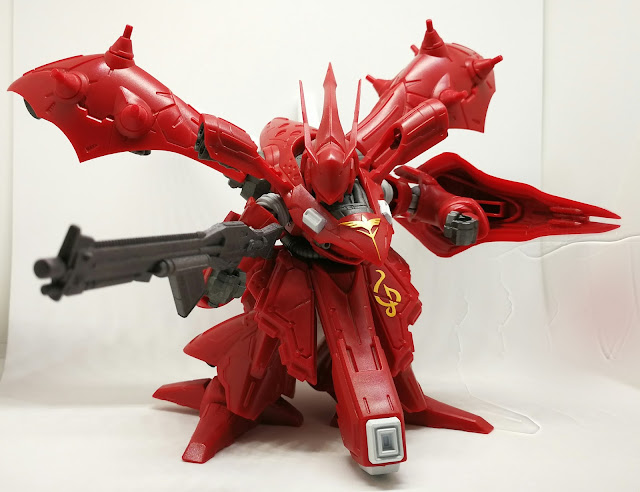 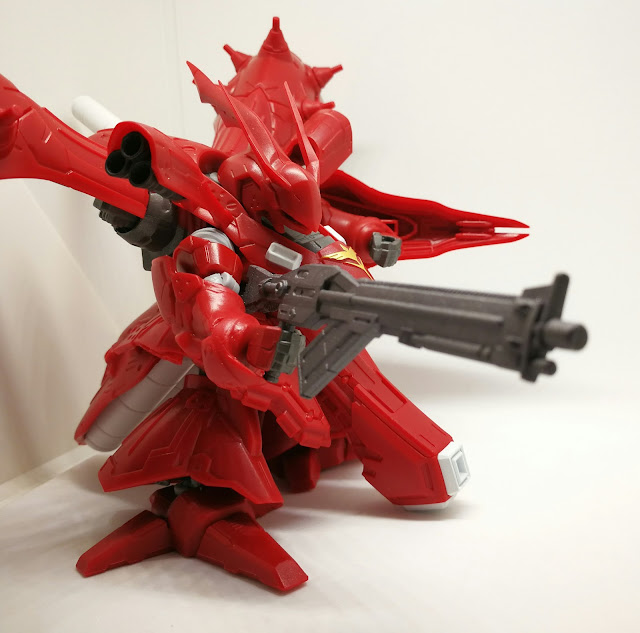 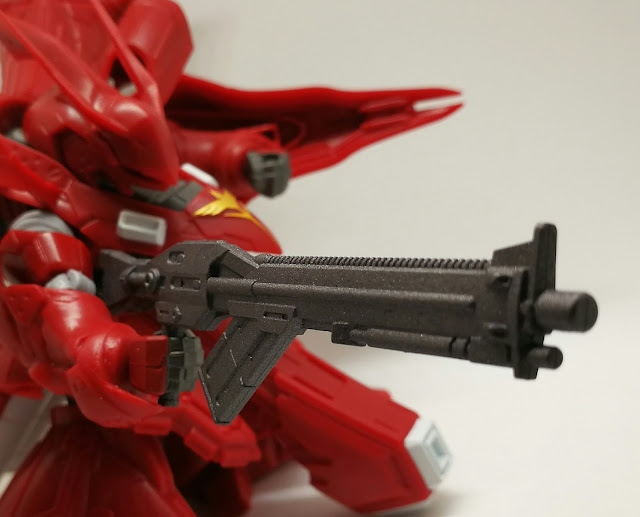 Posted by Gunplanerd at 4:48 PM