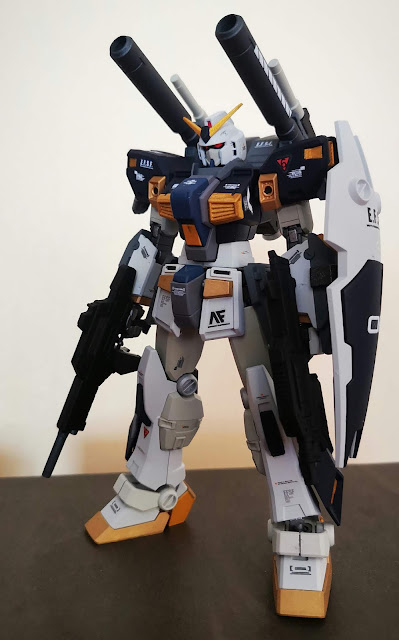 This is by no means a definitive guide to painting and customising Gunpla, it's just how I do it.


While there are many somewhat established pathways and processes to do builds, I feel that you should always go with the method you feel most comfortable with to prevent your hobby from becoming too much like a job, which will in turn lead to burnout.

For me, the build process is pretty "ghetto". As I don't have a dedicated workspace to do builds due to the circumstances called #Life, I do my kits pretty much anywhere with available space (usually the floor of my bedroom).

Colour Correction
Before the actual model kit is even opened, I usually do some research on the backstory of the mobile suit, its setting as well as possible colour schemes. This can sometimes take days and weeks due to procrastination. As a personal preference, I tend to go with the mobile suit's intended colour scheme as designed but with a twist: darkened hues and heavy usage of grey. 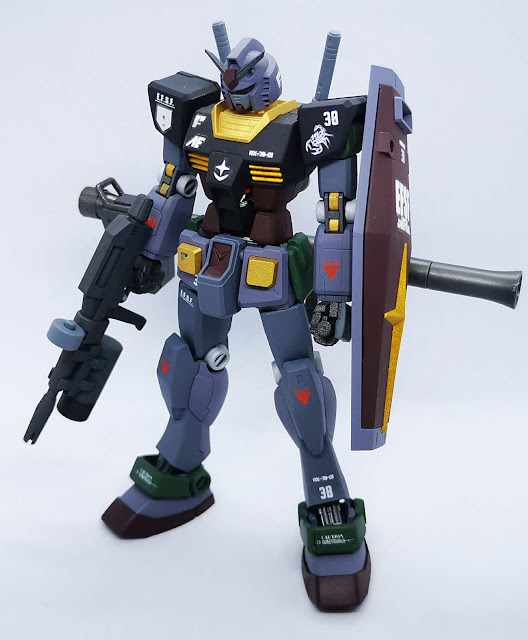 In fact, one single build can see the use of at least five different shades of grey (Grey, Medium Grey, Deep Grey, Dark Grey, Naval Grey), sometimes more. Grey serves to break up the monotony of the kit's main colours, giving it some visual variety and make it less boring. Of course, there's always the danger of going overboard with grey, so you have to adjust and adapt accordingly with each build. 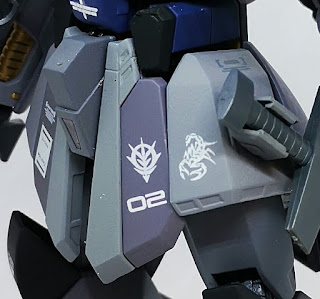 As far as possible, two adjacent parts on the model kit cannot have the same colour, although there are situations where this is not feasible. I tend to use a darker shade of grey with a lighter one for parts placed side-by-side to give it a nice colour gradient and the same theory can be applied for other colours as well. One of my all-time favourite combinations is the Light Blue-Deep Blue combo seen on many of my Federal Police or Titans-themed builds. 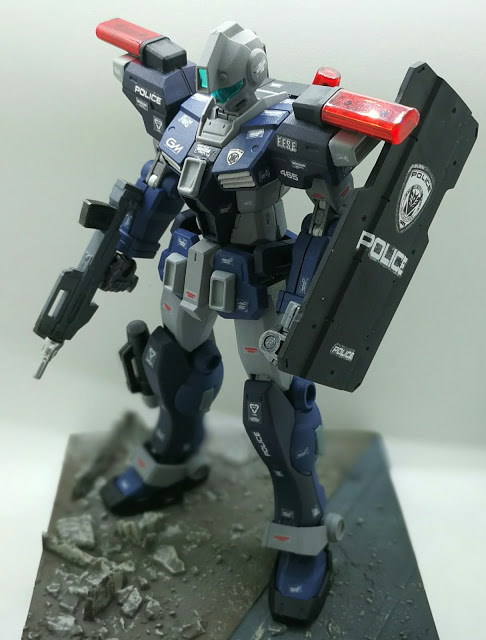 All inner frame parts are Tamiya Gun Metal by default, accentuated by either gold or silver in the inner joints (the bendy bits) to convey high performance and mechanical detail. Additionally, thrusters are painted in two stages: first to get gold inside the thruster and second to get silver all over the outside. As far as model kit stickers are concerned, I use them sparingly, usually only utilising the shiny foil ones for the eyes and sensors. Where possible however, I use rhinestones or gems to make the monoeyes and optics pop, but this isn't feasible all the time. 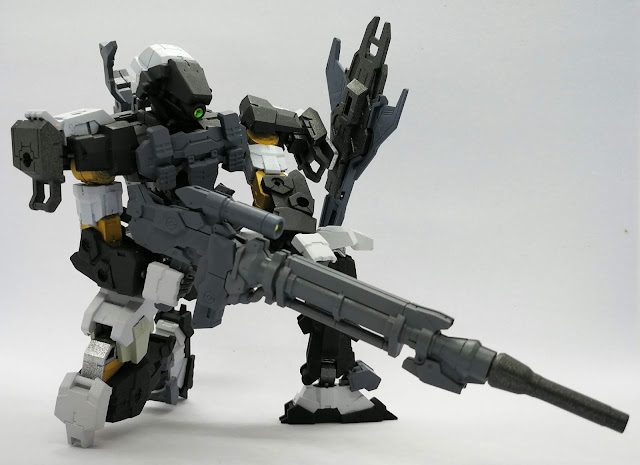 Freeing the Parts
After mentally confirming the colour scheme for a painted build, I proceed to free the parts from their plastic prisons and do the necessary prep - primarily nub slicing - before sorting them into their to-paint colours with the help of a compartmentalised box (or boxes for bigger builds). You can easily get these from Daiso, hardware enterprises or shops selling sewing supplies. 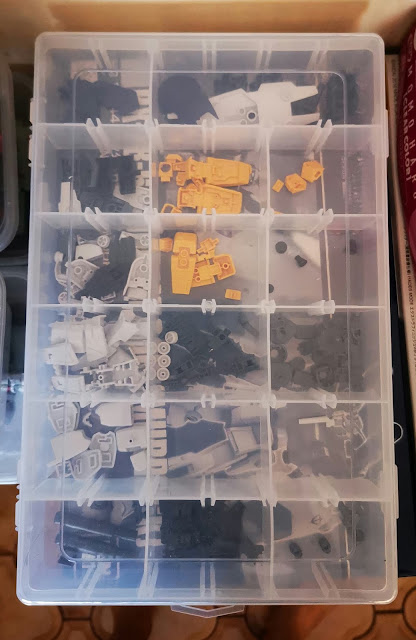 The parts are cut in the order stated in the manual: in essence, I am "building" the kit once through. Colour decisions for certain parts may also change at this point. It is necessary to pay close attention to the extremely small parts such as the crest part that typically holds V-Fins and tiny joint sections, especially if you are building RG 1/144 model kits with notoriously small parts. After nipping all the parts, keep the spent runners until the model kit is fully assembled - parts can sometimes be missed due to human error or a host of other reasons.

Skewering & Spray Painting
Once all parts have been cut, prepped and sorted, the most arduous phase of the build begins: skewering the parts for painting. Depending on the individual part, I use either a sticky tack-tipped or an alligator-clipped bamboo skewer to prop the part up for maximum productive paint coverage. The goal is to get as much surface area exposed as possible so that the paint can cover the entire part efficiently. For parts that are halves of an assembly (such as arms), I usually sandwich them around a larger piece of tack to ensure that both halves get a uniform coat of paint and the final assemblage doesn't look like a sunburnt beach-goer. 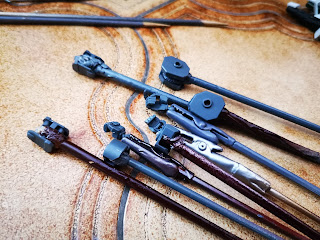 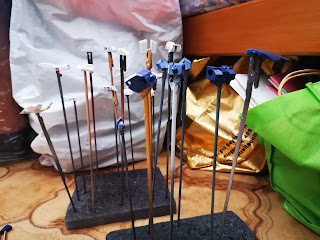 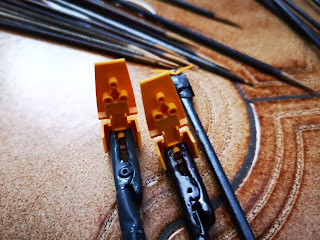 Parts of the same colour go onto a piece of hard foam like a less gruesome Vlad the Impaler display and spray painting can begin. Always remember to mask up: use an N95 or equivalent face mask to keep paint particles out of your respiratory system. It is also advised to only spray paint in well ventilated, wide open areas on bright, dry and sunny days for best results. Put on safety googles and gloves to prevent particles from coating arms and retinas. 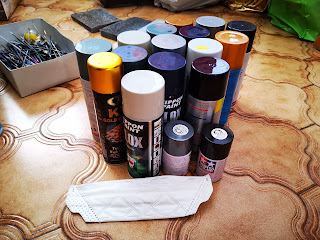 As you may already know, I favour spray cans, industrial ones at that. They are cheaper to purchase as compared to hobby spray cans and can last way longer, but at the cost of a generally thicker coat and a default glossy sheen.

Generally, parts should always be sprayed at arm's length, around 30cm from the nozzle of the can. In quick brushing movements, apply the paint in short, light bursts to the parts, making sure that each part is adequately covered before moving on. It is best to get everything done the first time than to go back and repaint an already-painted part which will result in a thicker final coat. 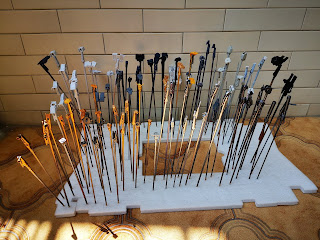 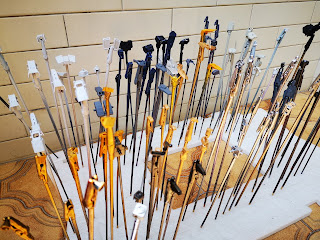 Once all parts have been painted, leave them out to dry for at least 4 hours. This is very important since industrial spray paint has a longer curing time as compared to hobby spray cans. Due to the nature of the paints I usually use, I typically leave the parts be for upwards of 8 hours. During this drying period, I plan/ prep the waterslide decals to be used, spend time with my wife, get some work done for my day-job or just generally live my life until the parts are ready to be assembled.

Now comes the fun part of the build process.

Build On!
Busting out the manual once again, assemble the model kit in the order intended: take care not to scratch the paint when removing the parts from the bamboo skewers. It is not advised to pry parts open once they have been snap-fitted together: you risk irreparably ruining the part, messing up the paint work or even both. Therefore, it pays to exercise utmost caution at the assembly stage.

Once the model kit has been fully assembled (yay!), give it a quick visual inspection to see if there are any critical areas that require remedy action. Move the joints to loosen the limbs and prevent excess paint from caking and affecting overall movement.

We can now move on to the penultimate stage of the build: waterslide decal application. As many builders can attest to, we have a love-hate relationship with waterslides. They look great without the ugly square borders of stickers but the process of putting them on can be either therapeutic or frustrating especially if the kit you are building requires lots of tiny waterslides.

As a personal preference, I tend to go lite with my waterslides. I use lots of affiliation insignia, unit numbers and logos with a smattering of caution signs and warning decals. The goal is to break up the monotony of colours with some text and illustrations but not to overdo it such that your kit becomes a NASCAR race car.

Once the waterslides are all applied, leave the kit in the open for the moisture to dry out completely. Ensure that the decals are not covered by parts or armour so that the the drying can be complete and total. Where possible, try to leave the completed kit out for at least two hours.

To put the cherry on top of the cake that is your latest build, apply a layer or two of topcoat to seal the deal. I use Mr. Super Clear Flat UV Cut for that nice flat finish but always remember to only do the topcoating in hot dry weather to prevent frosting. Leave the topcoated model kit out to dry again for about an hour or two. 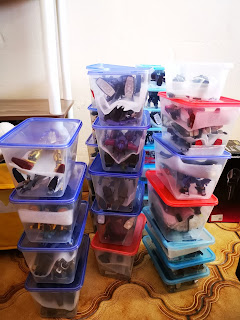 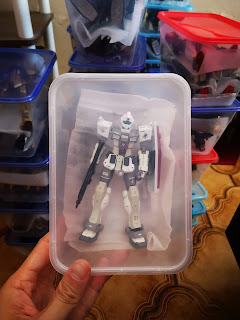 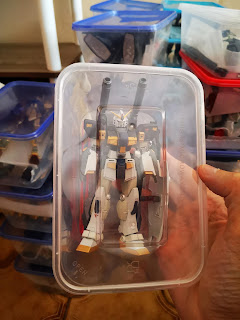 Due to space constraints, I store my completed model kits in plastic boxes until my housing situation changes to permit me more space with which to display my builds in all their painted, customised glory.

There you have it, a Ver. GPN build that isn't the best but still looks pretty good on a shelf!