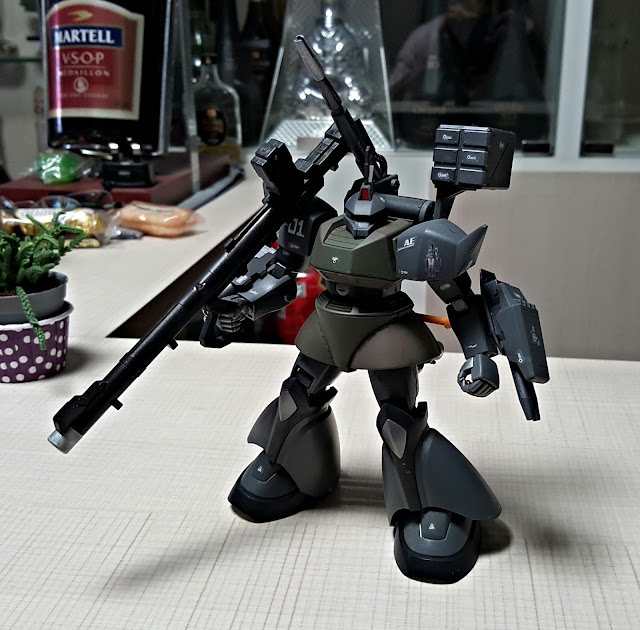 The Gelgoog has always been one of my favourite monoeyes: the bulky frame, boar-ish head and general ferocity makes it one of the more memorable Zeon units that came out of the One Year War, itself spinning into multiple variants and models as the UC timeline progressed.

A customised version of the original Gelgoog Cannon, this particular variant is developed for a small group build between some of us older builders. With the theme GM vs Gelgoog, we set about to create and customise our corresponding models, and due to share them this weekend. Nevertheless, my entry (of sorts) is ready for rollout!

Essentially a mobile suit fitted for one last stand against impossible odds, the A Baoa Qu Defense Ver. of the Gelgoog Cannon is largely the same as its full mass production brethren, but has a number of enhancements and upgrades to improve its performance. Issued only to veterans who have survived most of the One Year War instead of the student pilots tasked to pilot the standard Gelgoogs (to ill effect), the Commander-customised machine featured integrated small group command and control systems to facilitate the transmission of orders and combat data to the whole platoon. Retrofitted for semi-zero-gravity combat on Zeon's final fortress, this Gelgoog Cannon variant is equipped with more powerful skirt and leg thrusters, in addition to two more high-torque verniers affixed to the back of the skirt armor below the beam naginta. This allows the Commander to move swiftly from point to point, issuing orders and supplementing the defense of that particular sector.

This Commander version of the Gelgoog Cannon features many more weapons over the regular rank and file. Retaining the right shoulder-mounted high-power beam cannon and the three-tube rocket launcher mounted on its left forearm, the Commander is also outfitted with a double-barreled beam cannon with an integrated mini-shield, a six-tube armor-piercing missile launcher mounted on the left shoulder as well as a handheld experimental mega bazooka designed to sink Salamis-class cruisers with a well-placed shot.

This version of the Gelgoog Cannon only saw action during the defense of A Baoa Qu, valiantly stemming the tide of RGM-79 GMs, RB-79 Balls and their Salamis-class cruiser motherships. Despite its heavy loadout and improve combat performance, the Zeon forces were still unable to overcome the overwhelming military might of the Federation and their White Devil.

Read more »
Posted by Gunplanerd at 6:03 PM No comments: 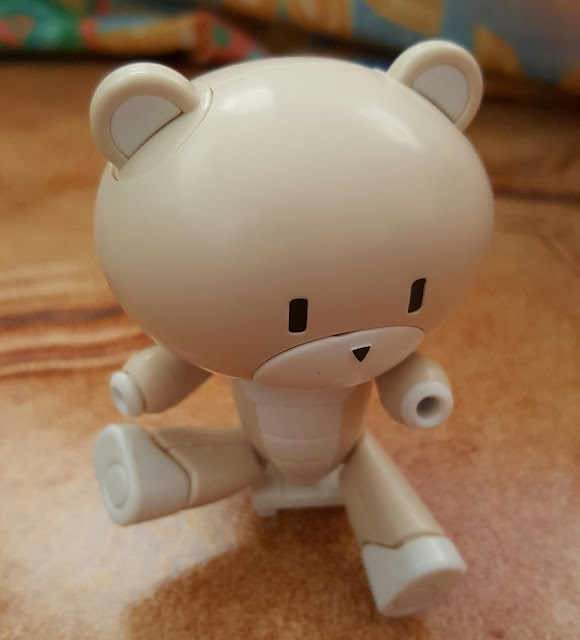 You can get a bunch of these and create your own Bear army!
Read more »
Posted by Gunplanerd at 1:12 AM No comments: 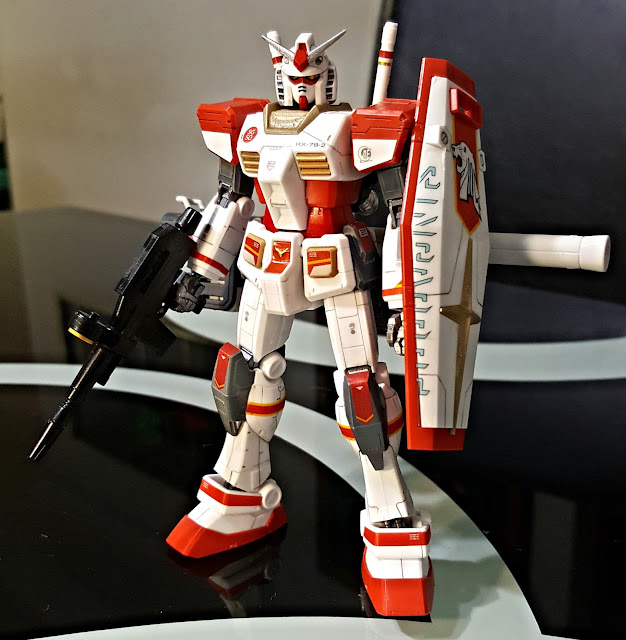 As our only national Gundam, I cannot just do a straight build and call it a day!

Thankfully the greys still work well with the reddish-orange and white parts!

The decals leave a little to be desired, some just wrap around details in the armor while others will likely come off with time, so it's best to topcoat this beauty once you are done with it. Weapons-wise, I can't understand Bandai's regression on the beam saber, but the metal chain for the Gundam Hammer is a nice touch. The stock bazooka was been replaced with a nicer-coloured third party version that is more in line with the overall colour scheme.

The SG50 Gundam is nice, meaningful way for us Singaporeans to celebrate the  nation's 50th year of independence, scalpers notwithstanding.

Read more »
Posted by Gunplanerd at 8:08 PM No comments: 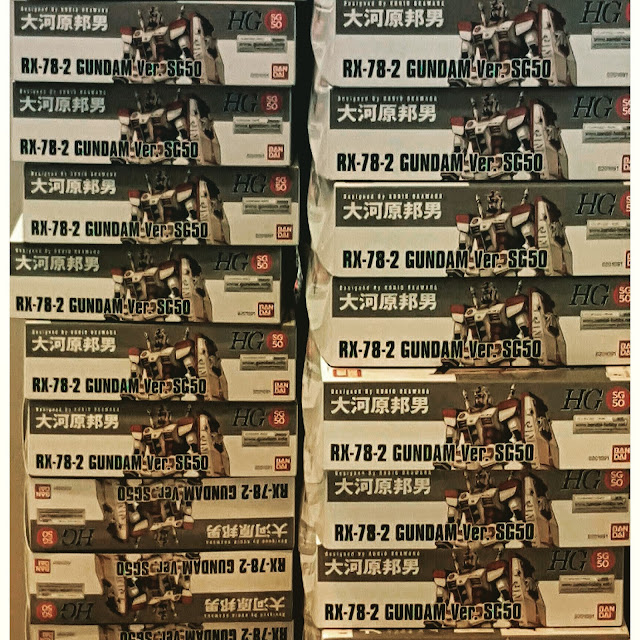 Within the span of less than five days, 6000 units (or so presumed) sets of the uniquely-Singapore HG 1/144 RX-78-2 Gundam Ver.SG50 have been snapped up, smashing every single sales record in the history of the Gundam Docks exhibition.

That is the happy part.

The sad part is that many of the model kits sold have been purchased by individuals or groups that only have vested financial interest in the hobby, thereby depriving true fans of the franchise their only chance of obtaining a truly Singapore model kit.

This SG50 Gundam is a one-off happenstance that is unlikely to happen again in my lifetime, that is why it is so coveted by many builders, especially this year when it is the 50th year of our nation's independence.

Anticipating the scalping that will undoubtedly occur as evidenced from past events (Hello Kitty, SNSD concert tickets), I was one of the first 50 people to line up for the kits on day one, when the limit per person was 10 units. On hindsight, the organisers could have limited that number to the current two right from the start, in order to deter the scalpers looking only to gain financially. I personally saw (and captured on photo) someone carting away five full cartons of the kits. I will let that sink in for a bit.

Personally, I bought the maximum of 10 sets, but apart from keeping two for myself, the other eight sets were resold to true fans at cost price - I made no profit whatsoever from this exercise. All I want is for true fans to own a piece of Gunpla history. Too bad the others aren't so altruistic.

It really saddens me to see the amount of scalpers turning my beloved hobby into a goddamned MapleStory free market.
Posted by Gunplanerd at 10:22 PM 1 comment: 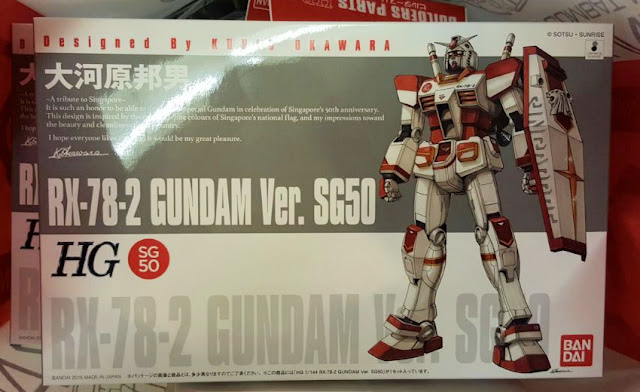 Pretty neat of Bandai and the venerable Kunio Okawara to design and release this repaint of the Ver.GFT RX-78-2 for the 50th year of Singapore's independence!

This is really one exclusive that cannot be missed!
Read more »
Posted by Gunplanerd at 11:40 PM No comments: 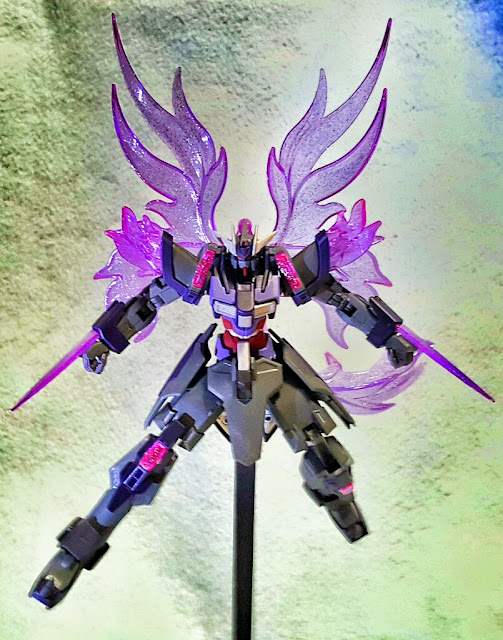