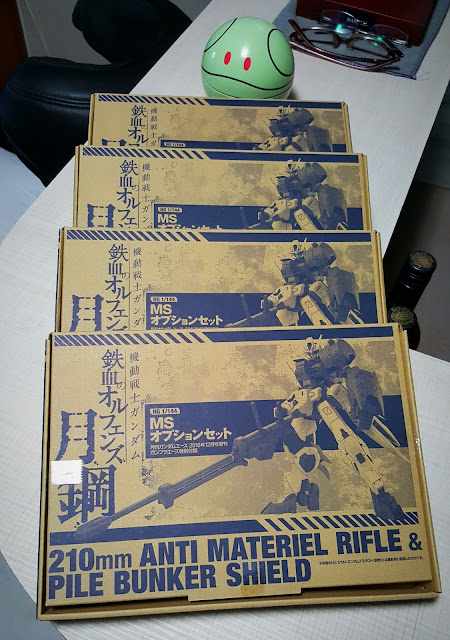 They add a deeper dimension to existing model kits, granting them new weaponry and/or armor parts to further deepen their lore. The December 2016 issue of manga compilation Gunpla Ace comes with a runner of parts for you to build two weapons ostensibly for the HGIBO 1/144 Gundam Astaroth: the massive 210mm Anti-Materiel Rifle as well as the heavy Pile Bunker Shield.

The Rifle is HUGE, taller than the Astaroth and also the Barbatos Lupus. It also comes with a small joint part for attaching to your Gunpla, although attaching to the Astaroth requires the removal of its right skirt armor. You will need additional joint parts to mount it on the backpack, as I've done with help from the joint from the HGIBO 1/144 MS Option Set 5.

Although the Rifle is massive, it is still fairly light enough for any mobile suit to grip and pose with, although the bulk may make holding the rifle with both hands a tad difficult. Patience is key. The Pile Bunker Shield is interesting in the sense that it looks heavy enough to both deal and take a significant amount of punishment, but is actually pretty light to be able to be mounted on the forearm.

This supplement is a great addition to the arsenal of IBO, more guns are welcome to the plethora of melee-oriented weapons!
Read more »
Posted by Gunplanerd at 9:18 PM 1 comment: 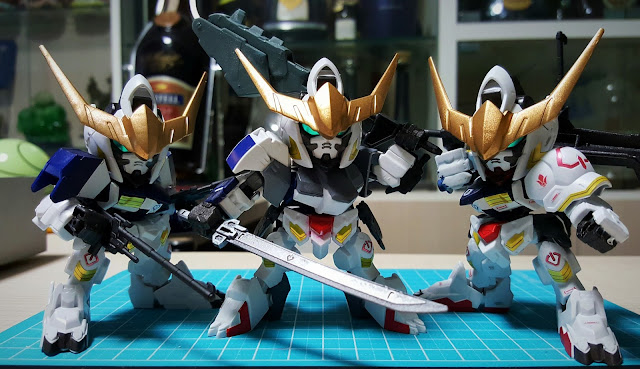 If you're looking for a SD Barbatos to add to your collection, consider getting a DX one first, before deciding if you need five more SD EX-Standard ones to create all six forms of the Barbatos.
Read more »
Posted by Gunplanerd at 8:57 PM No comments: 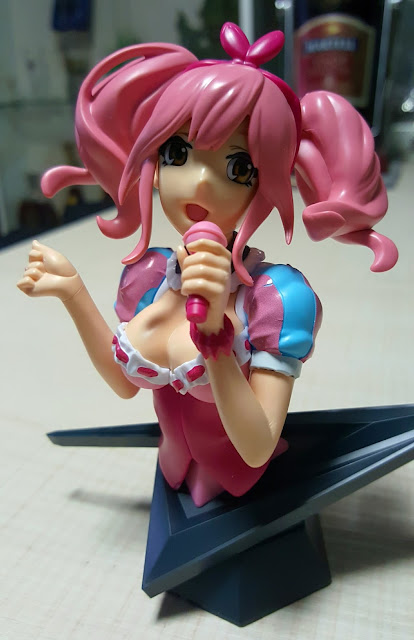 Figure-rise Busts are an acquired taste: they are somewhere in between a full fledged figurine and a head bust, so they won't have the mass market appeal of either. Nevertheless, Figure-rise Busts can be refreshing to build, especially if the end product is pleasing to the eyes (not referring to you, shirtless Mikazuki Augus).

The Macross Delta series has no shortage of beautiful heroines since the entire premise of the show rests on the beautiful heroines sent to combat the Vajra disease by the power of love and song and all that mumbo-jumbo. We will definitely see Figure-rise Busts of all members of Walkure, but the only one that caught my eye is Makina, apart from Mirage, for obvious reasons.

Construction-wise, Figure-rise Busts are simple, but attention to the orientation of the parts must be paid since most of the parts only fit a certain way. Large stickers are used for colour separation on a good number of parts, probably to keep costs of an already pricey kit down for mass appeal. Although these stickers can be tricky to line up, position and secure, they don't look too bad once transferred to their corresponding plastic surfaces.

The eye parts warrant a mention, simple because they are marvels of colour injection. Reminiscent of the multi-colour gating seen in the early Bandai Star Wars 1/72 TIE Fighter model kits, the eye parts are composed of three separate colours, gated together into beautiful optics. Once transplanted to the face unit, the eyes look absolutely remarkable.

The final product is interesting to look at: visually pleasing and easy on the eyes. It would be a sight to behold if you have all members of Walkure, lined up in front of 1/72 Siegfrieds!

Read more »
Posted by Gunplanerd at 8:40 PM No comments: 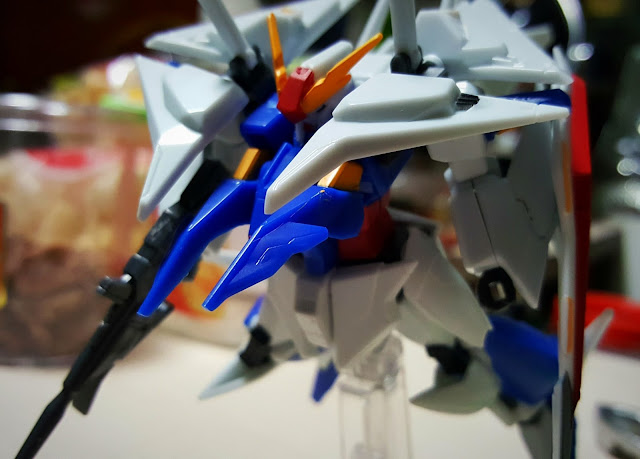 The Xi Gundam is larger than its brethren, giving you a little more justification for making the purchase. Fitment can be a little tight around the joints, and the plastic used on certain white-coloured sections can be pretty tough. One gripe I have with this collectible is that the head unit doesn't turn at all, limiting the type and number of poses that the Xi Gundam can accomplish.

So if you want a better Xi Gundam but don't want to break the bank by getting a Mechanicore 1/72 version, you might want to consider the MC Model 1/144 version until Bandai decides to release the Xi in RE100 format.

Read more »
Posted by Gunplanerd at 8:25 PM No comments:

What's not to like about intricately sculpted 1/12 scale replicas of real-world handguns finished in silver chrome?

Materia adores them, but they are too small for Gunpla manipulators, so best to save them for Figmas, SH Figurarts and Frame Arms Girls or Armor Girl Project figurines.
Read more »
Posted by Gunplanerd at 8:18 PM No comments: 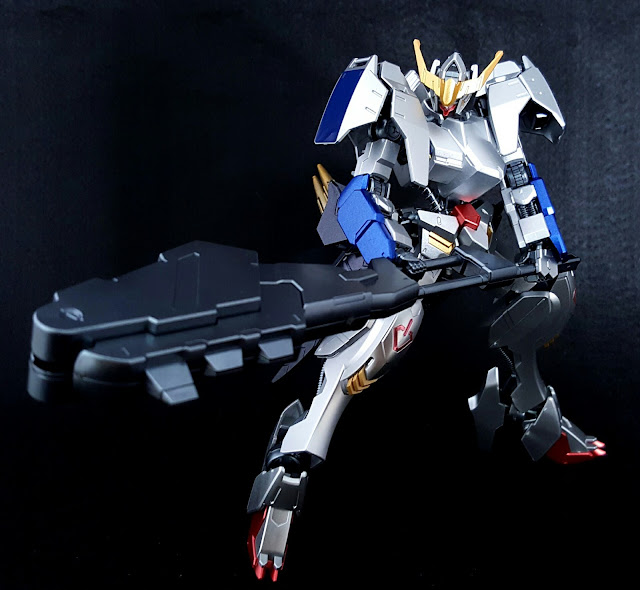 What's not to like about a metallic Barbatos!
Read more »
Posted by Gunplanerd at 8:36 PM No comments: 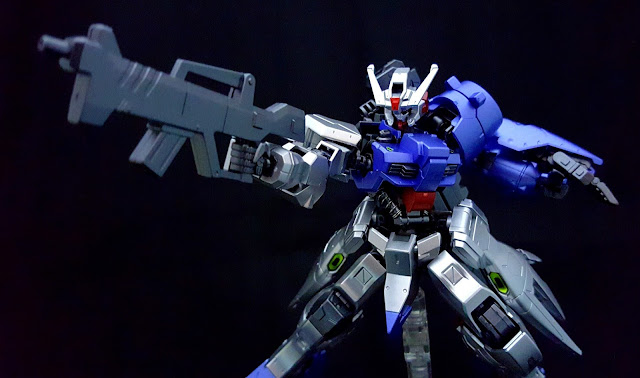 You have to hand it to third party companies for filling gaps that the mainstream companies cannot or would not. Soul Model is a Chinese firm that applies a beautiful metallic coating to Bandai Gunpla kits before reselling them, for a fee of course. Essentially, your regular model kits now become coated ones, looking fantastic on any shelf.

The coating quality is superb, similar to the coating found on the MG 1/100 Hyaku-Shiki 2.0. Although fitment can be tight around certain areas, the parts still generally snap together well. Nub marks are a given on any coated kit, but Soul Model is kind enough to provide markers for you to do any minor touching up.

These SoulModel babies look awesome, but can be a tad expensive for casual modelers to cough up the cash for.
Read more »
Posted by Gunplanerd at 8:32 PM No comments: