Before we begin, I have to say that I'm not particularly fond of RG kits. Yes, they have a wealth of detail, gimmicks and range of motion that regular HGs don't, RG kits are just troublesome to build, to say the least. Nevertheless, they are great kits for casual hobbyists who do not want to waste too much time and effort in doing up a kit that will look fantastic straight from the box.

This particular project came about upon realising that neither my HGUC RX-178 Gundam Mk-II [AEUG Ver.] nor the RX-178B Build Gundam Mk-II could equip the RG 1/144 Flying Armor and G-Defenser kit from BTF that I acquired online for a great price. The RG Strike Freedom gave me a headache when I was building it, so I wasn't very keen on beginning another RG.

But we all know how that turned out.

Overview
The Build Gundam Mk-II was the spare machine for both Sei and Reiji in the anime series, deployed when the Star Build Strike was too damaged for battle. It was a severely underused machine, counting a custom Gundam Double X and a modified Apsaras-III as its worthy adversaries before being relegated to silly duties. Despite its relatively simple design, the Build Gundam Mk-II was versatile, rugged and deadly in the hands of a skilled pilot.

Sei's Build Gundam Mk-II was based on the AEUG variant, sporting a grey and navy blue colour scheme. To me, the Titans version of the RX-178 Gundam Mk-II looked way more kickass, primarily because it did away with the kiddish primary colours of red, blue and yellow. The Titans colour scheme made the RX-178 look way more lethal and brooding, effectively conveying their brand of ruthlessness even before actual combat. Therefore, the RX-178B-T3 is what the Titans would field for the Gunpla Battle World Championship if it existed in the universe of Gundam Build Fighters.

Differing slightly from Sei's Build Gundam Mk-II, the RX-178B-T3 sports a more traditional Gundam Mk-II frame, losing the new Airmaster-ish V-Fin and the extra chest armor that Sei added. I felt that the new V-Fin made the Build Gundam Mk-II a little dorky, and the additional chest armor protruded out like a sore thumb. Hence, they were omitted from this build. Weapons-wise, the RX-178-T3 retains all the weapons of its predecessors, although only the Beam Sabers, Beam Rifles Mk-II, Movable Shield and Vulcan Pod are equipped. It also gains a new weapon in the form of the Long Beam Rifle from the G-Defenser, fixed into the position where the right Movable Shield used to be. Overwhelming firepower, that's what the Titans are all about.

Being a RG kit, the part count was dizzying. A simple shoulder took about five to six parts to assemble, while the simple two-piece affairs of HG weapons became six-part complications. 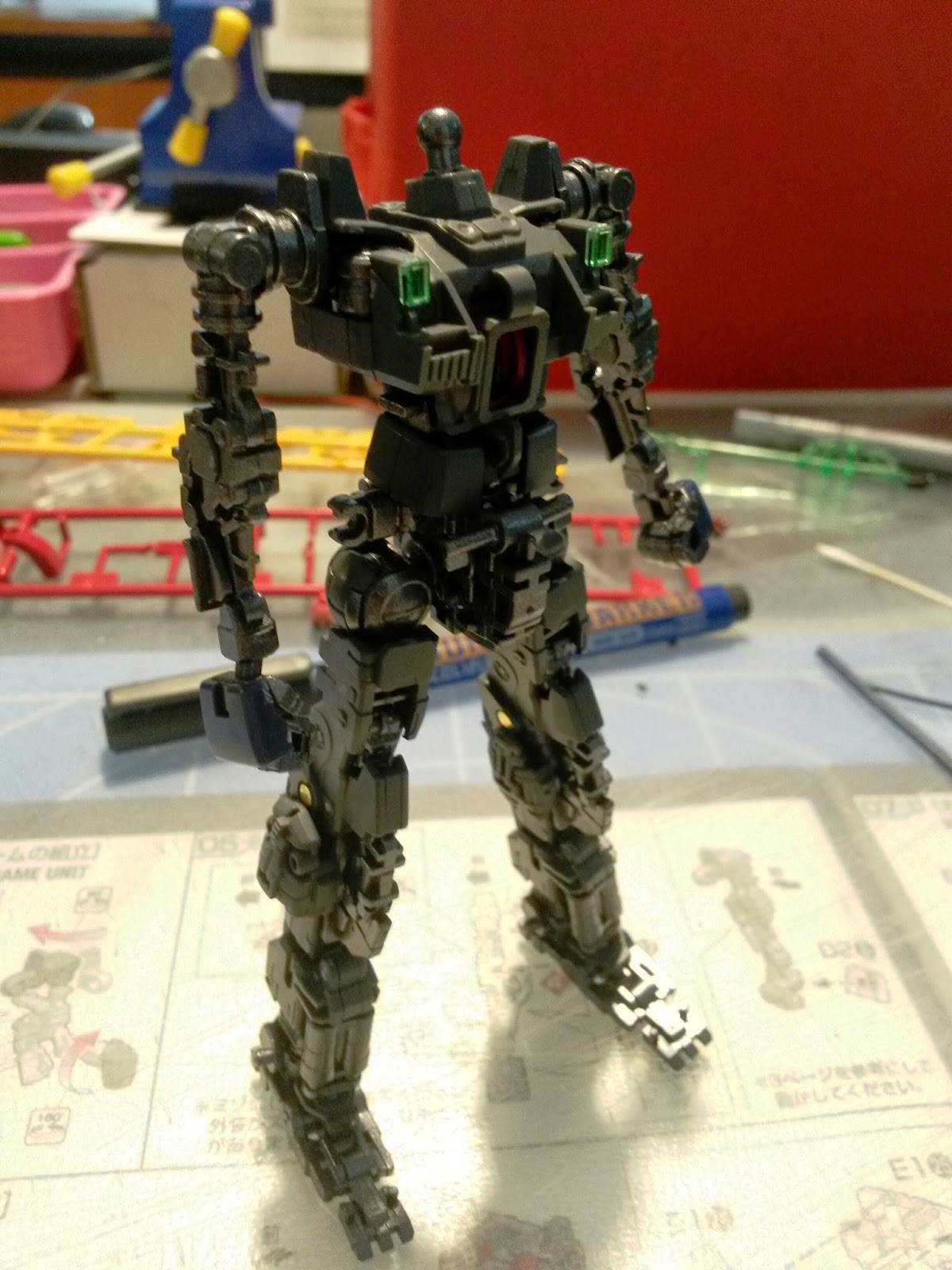 However, the Movable Frame was something else, it really felt like I was building an MG as the armor components bolt on to that inner frame.

Prior to construction, I applied several coats of paint to specific runners in order to enhance their appearance:
I realised that Gunship Grey is a very versatile colour, able to blend in nicely with the rest of the colours for any kit. It was produced a smooth matte finish by default, not a shiny, glossy surface like the metallic paints. On hindsight, I should have painted the grey parts gunmetal instead to show machinery beneath the armor plates, but grey works fine as well. 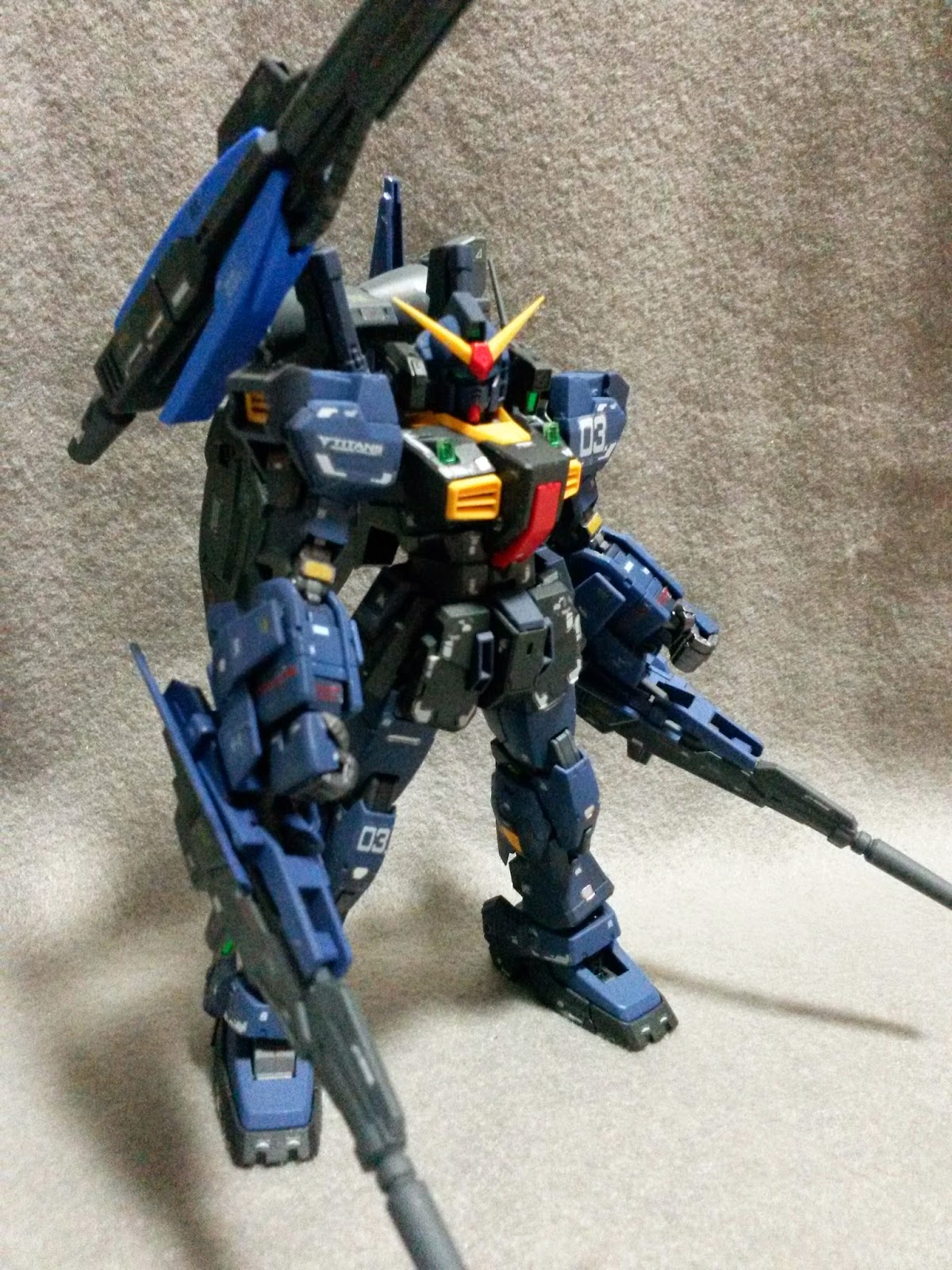 Being an RG kit, the details are immense. There are plenty of lines and mechanical markings all over the kit, even the concealed inner frame. The weapons also bear an abundance of detail, amplified by the Realistic Decals that are applied at the end step. For the HGBF 1/144 Build Booster Mk-II, being a HG kit, more effort would have to be spent to beautify it in order to match its RG parent machine. I spray painted the thruster units of the Booster metallic black, gave the grey parts a generous dose of gunship grey before spamming RG decals on the rifles, arm shields and the main unit itself. One thing great about RG kits is the unit's high level of mobility and wide range of motion. It can touch it own shoulder, do splits and generally achieve more poses than HG kits. However, the waist of the RG RX-178 leaves a lot to be desired as it can only rotate no more than 20 degrees in either direction. This really limits the dynamic poses it can do, confined to ho-hum frontal shots. That being said, the poseabilty of the kit is still very remarkable. This RG kit comes with two types of leg thrusters and two kinds of chest vents for your use, each conveying a different look for the kit. The RX-178's usual weapons are all provided: Beam Rifle, Hyper Bazooka, the Collapsible Shield as well as the hands to wield them. Those super-flexible MG-style hands are also included as well, though I wouldn't recommend using them to hold anything heavier than a beam saber. 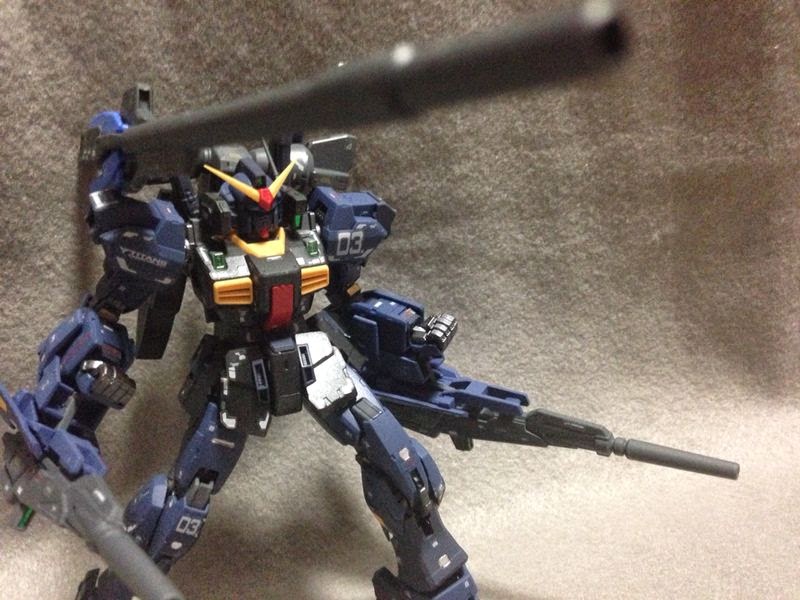 I really like how this kit turned out: a walking tank that has the agility of a fighter jet. Maybe I should do up an AEUG version to battle this guy. Then again, maybe not cause RGs are just too troublesome.

Posted by Gunplanerd at 1:22 AM