The Ultra GM is based on the concept of a one-GM assault unit, that is, an area-dominance mobile suit designed to assault and take a hotly contested point of contention with extreme prejudice. To that end, it must be able to first break through the enemy defenses with heavy weaponry and then annihilate all opponents with the same weaponry, all the while under retaliatory enemy fire.

Simply put, the Ultra GM must be able to receive and dish out a significant amount of punishment, staying active on the field of battle for as long as possible.

Although the final machine drew much inspiration from the Dendrobium of Stardust Memory 0083 and the METEOR Unit from Gundam SEED, the Ultra GM was however to remain as that, a GM, and not encased in an enormous mobile armor that wouldn't make much tactical sense for its role. It still had to be small in profile, mobile and easily fielded onto any field of battle.

Therefore, all weapons and armament must be able to fit onto an existing GM platform, for ease of maintenance and part replacement should it be fielded onto a theater of battle (indulge me).

Several GM models were tried and considered, but most failed to make the cut as they either had too little armour or too little hard points for the mounting of additional weaponry. The desired GM platform would have to possess a near-perfect mix of armour, articulation and surface area for all the additional equipment it was designated to carry.

In the end, the GM Sniper K9 platform was chosen for a number of reasons.

Firstly, the GM Sniper K9 is a custom modification by the Renato Brothers based on the RGM-79SP GM Sniper II, a mobile suit that was considered a masterpiece in the One Year War, favoured by veterans and seasoned fighters alike. Therefore, UC engineers would have ready access to this frame.

Secondly, the GM Sniper K9 featured additional armour in the chest, complementing the idea of an up-armoured GM well. Thirdly, the K9 Dog Pack has many hard points to mount all the additional weaponry in store for the Ultra GM, but a little suspension of disbelief is required here as the design might be a little too far-fetched for UC engineers. Nevertheless, the construction of the Ultra GM could finally begin.

It wasn't a walk in the park to conceptualise and then manifest the design of the Ultra GM's backpack, shortened to the 'Ultra Pack'. Right from the beginning, it was slated to use the MS Cannons and Torpedo Launchers from the HD Builders Parts - MS Cannon 1 accessory add-on as well as the Missile Launchers from the HD Builders Parts - MS Launcher 1 accessory pack. After hours of agonising over the mounting system for all these weapons, it was finally achieved using small joints from the HG Customise Campaign along with a legless K9 Dog Pack that more or less looks like a backpack, sorta.

Construction of the main unit of the Ultra GM itself was much easier, although much preparatory work had to be done prior. Featuring the most number of colours used for any single project, the Ultra GM featured colours from olive drab to metallic olive green to titanium silver and even gloss aluminium. In particular, the coating pattern of the metallic olive green gives the Ultra GM a woodland-camouflage like sheen, adding weight to its militaristic appearance.

The GM Sniper K9's front skirt armour, side pouches and handgun holsters were all removed from the Ultra GM. Two three-round lateral grenade launchers were sourced from a Jesta and mounted in place of the side armour panels, while the front skirt armour became a more traditional one from the old GM Sniper II.

The shoulders were also switched out. Puny in size as compared to the rest of the mobile suit, the GM Sniper K9's shoulders were removed and replaced with painted ones from a GM III. In addition to being larger and more menacing, these shoulders also had the added advantage of mounting twin 4-tube missile launchers on each side, granting the Ultra GM even more firepower.

The Ultra GM inherits all the features from the GM Sniper II like the slide-down targeting visor and dual beam sabers, as well as certain features from the GM Sniper K9: the shoulder-mounted combat knife and the additional chest armour. The full list of the Ultra GM's armaments are:
The design of the Ultra GM is also modular, which means that components on the mobile suit can be purged at any time to prevent spent weaponry from becoming dead weight. The Gatling Cannons in particular, can be released from the backpack and wielded by hand, should the pilot consider it necessary.

Another tough decision to make was the weapon that was to go into the left hand. The right hand would hold the Ultra GM's primary weapon - the Beam Carbine - but what would the left hand hold? I tried using another beam rifle, but it looked so weird. Bazookas came next, but that severely hindered the mobility of the mobile suit. Eventually, I settled for handguns, as they would are compact, easy to wield and can pack a punch. Of course, I wouldn't settle for the GM Sniper K9's puny-ass pistols, the Ultra GM gets a custom one.

A typical military operation for the Ultra GM would be something as follows: a GM platoon is being pinned down by heavy enemy fire near the rocks of a mountainous overpass, and Command is unable to send another GM Team to reinforce them due to the treacherous terrain. However, Command authorises the use of the Ultra GM to both assist the trapped GM platoon as well as wipe out the enemy presence in that vicinity.

Dropping in via air transport, the Ultra GM lands somewhere near the embattled GM platoon and lays waste to enemies afar that are assaulting the GMs' position with the shock cannons. The Ultra GM then spots an enemy land battleship, and proceeds to decimate it with a precision-guided anti-ship torpedo. A whole horde of enemy units then converge onto the Ultra GM, prompting the pilot to activate its "All-Range Attack" combat protocol, firing a sustained fusillade of anti-shredding rounds, missiles and grenades at the oncoming enemies. The Ultra GM only ceases its onslaught after its gatling cannons have stopped spinning.

As the dust settles, one blue commander unit is seen limping away from the carnage, desperately trying to get its backpack thruster to work in order to escape. The Ultra GM purges all its empty munitions and goes after the escapee, using its newfound mobility to close the gap between both machines in seconds. With a swing of its beam saber, the blue commander is forced to the ground, with the gleaming tip of a combat knife inches away from the cockpit.

Overall, I really like how the kit turned out: it combines so many of my favourite Gunpla aspects into one awesome, overloaded package. 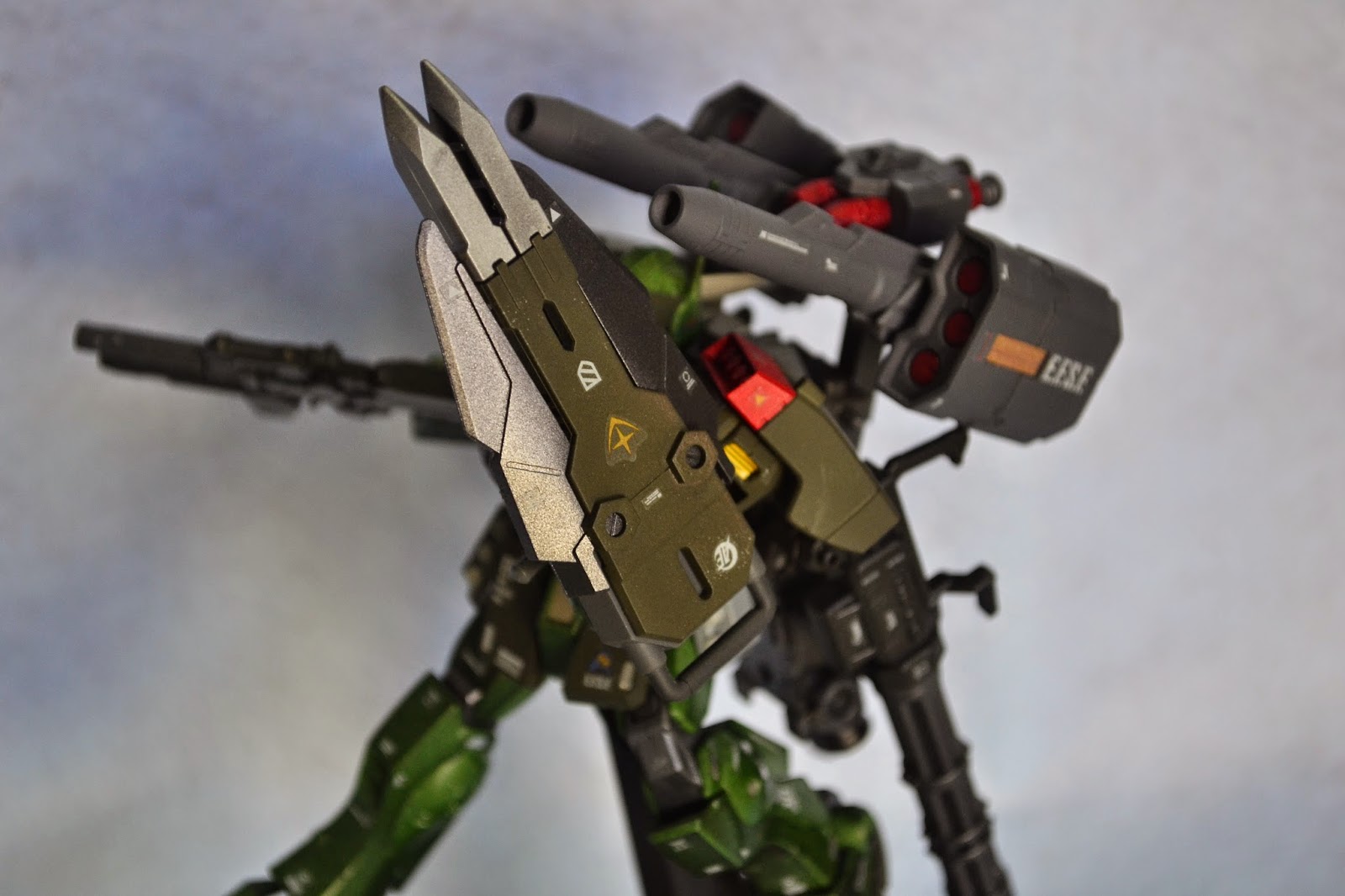 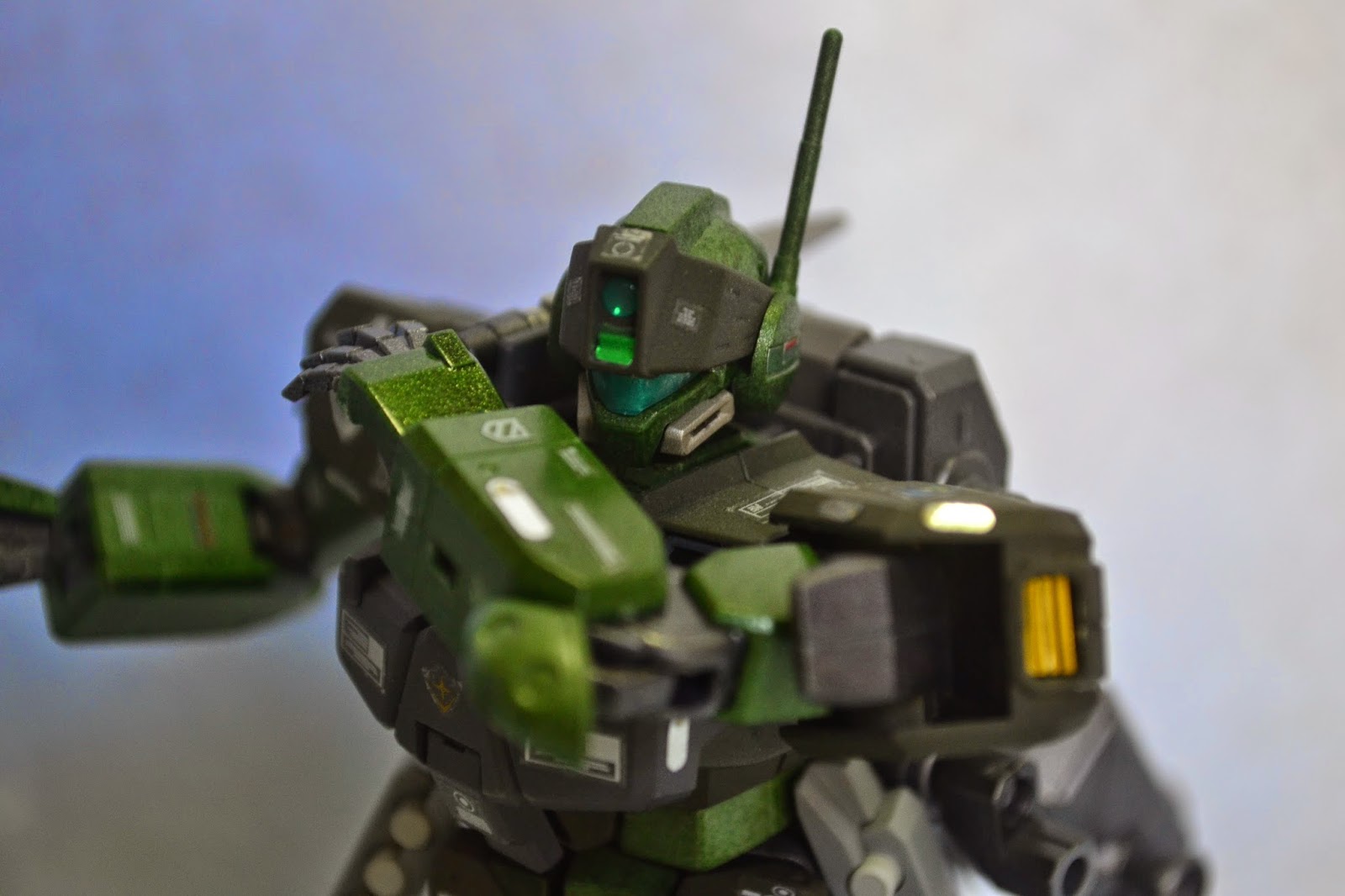 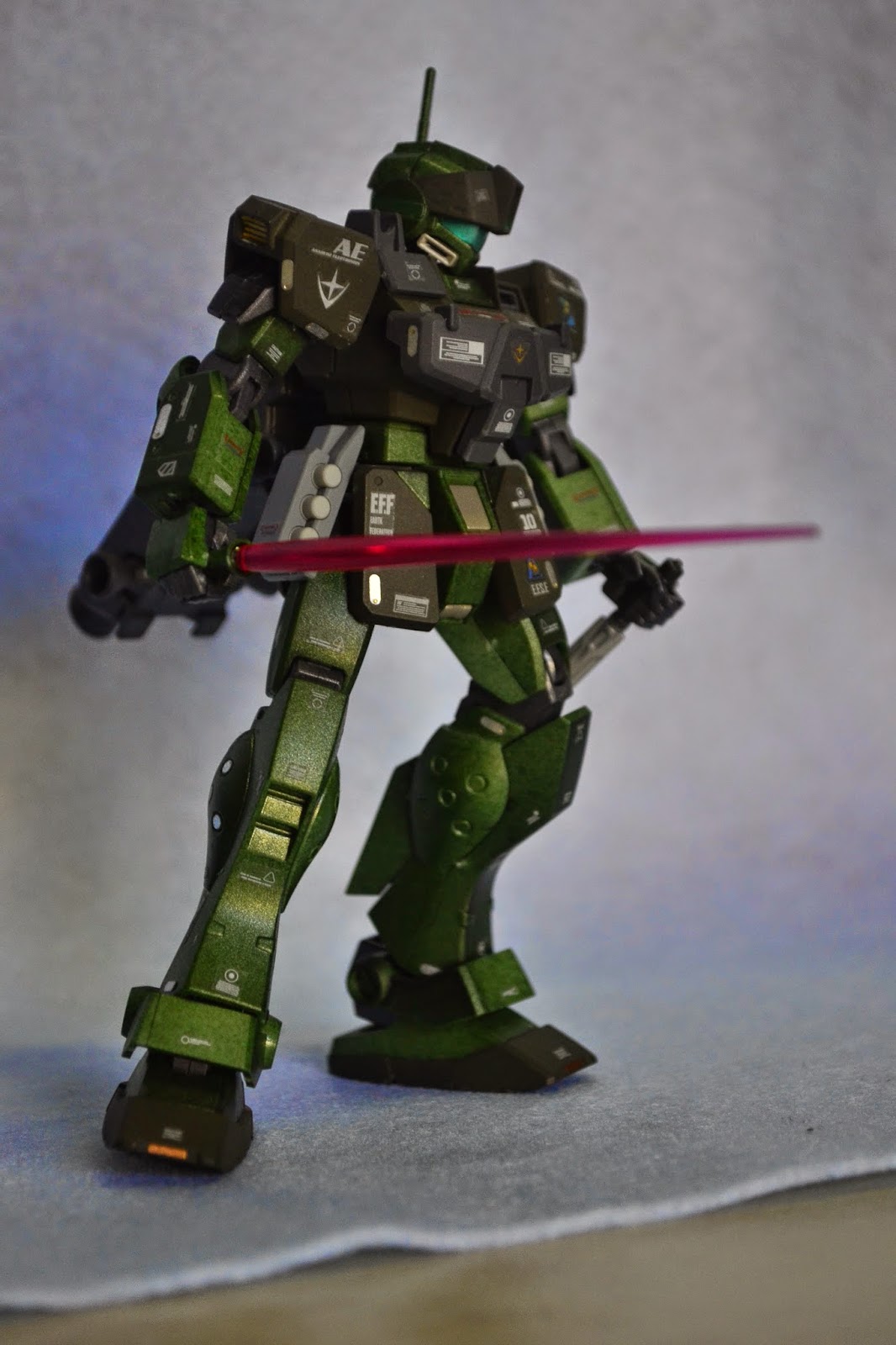 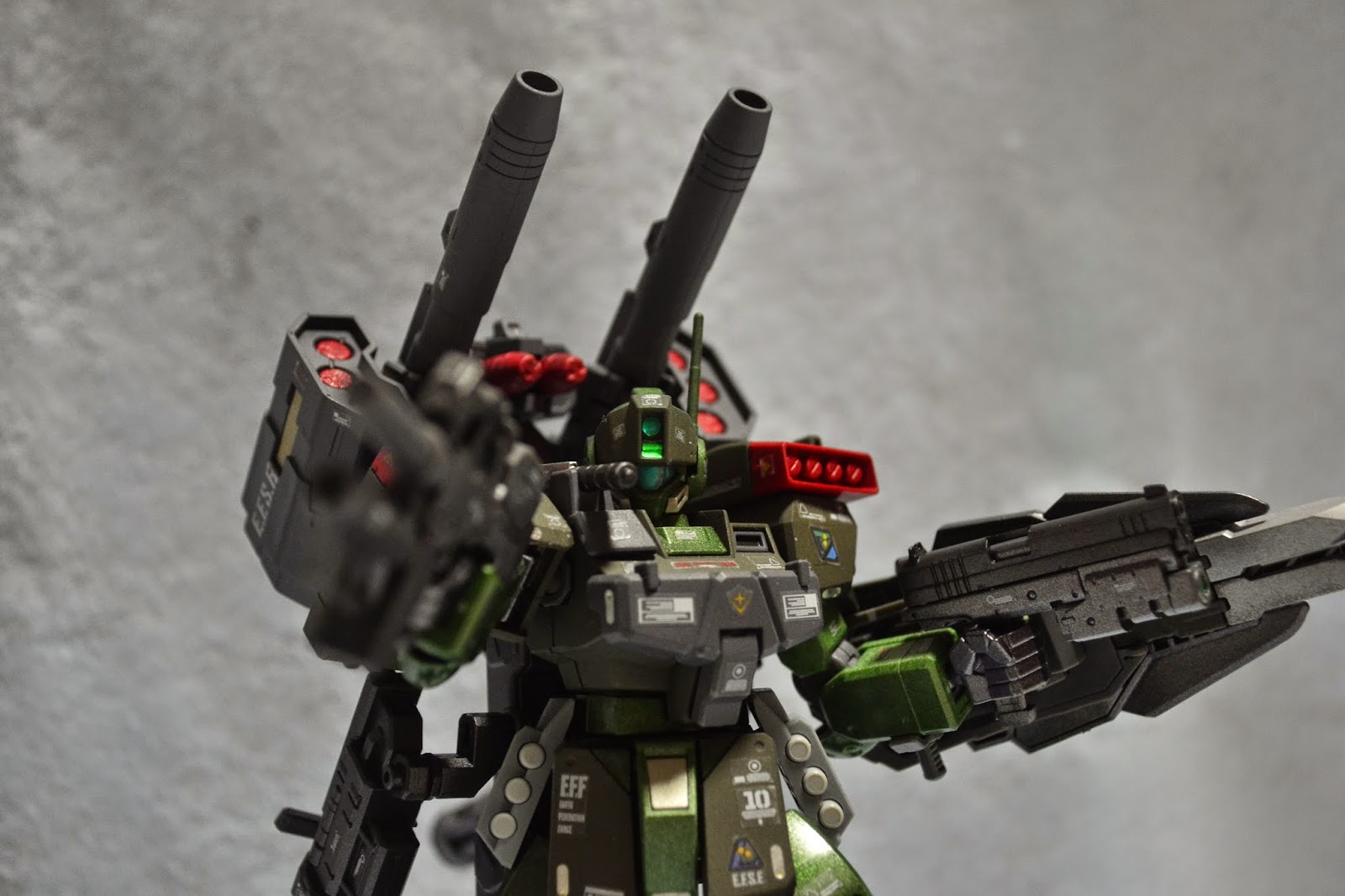 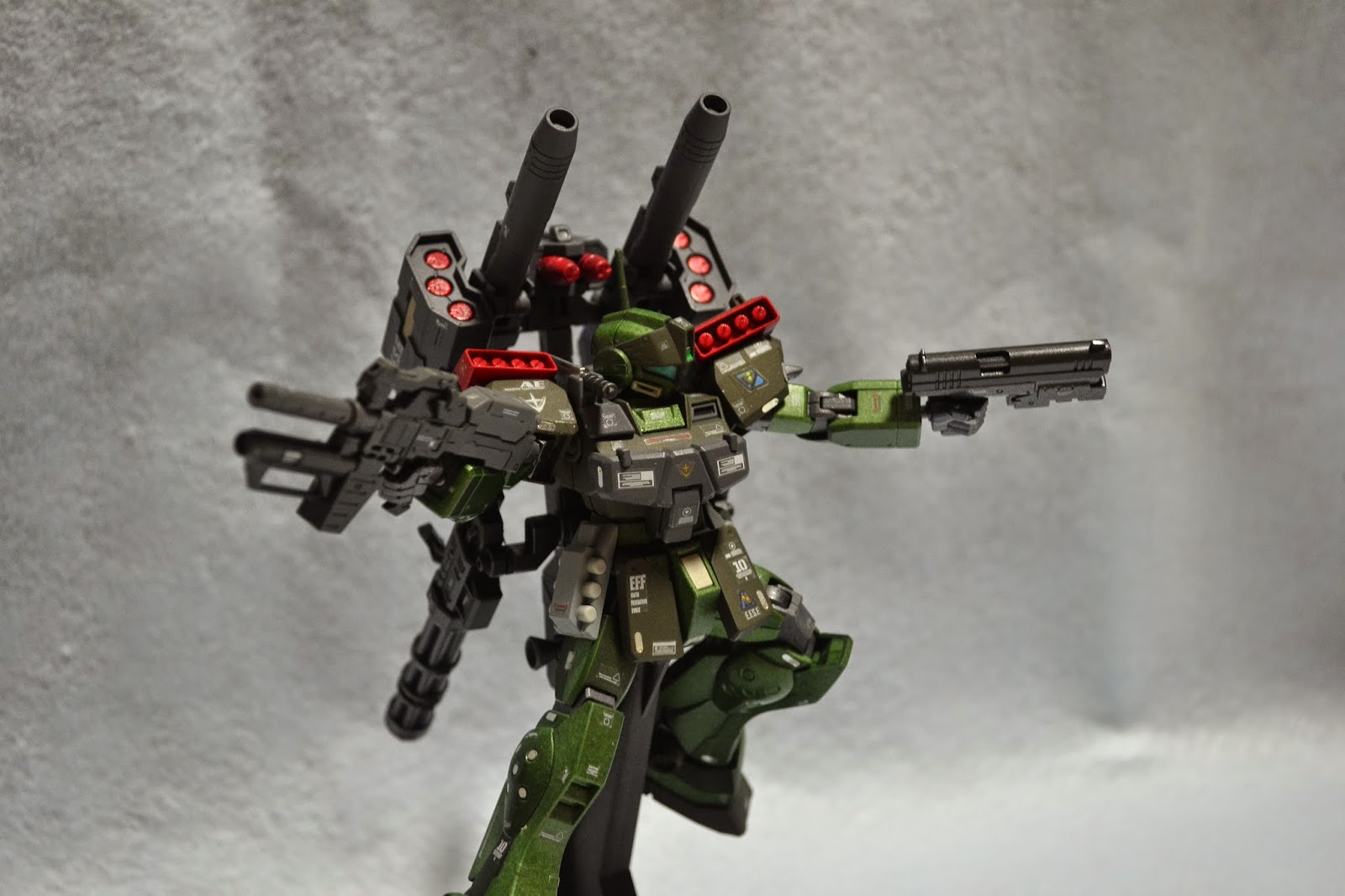 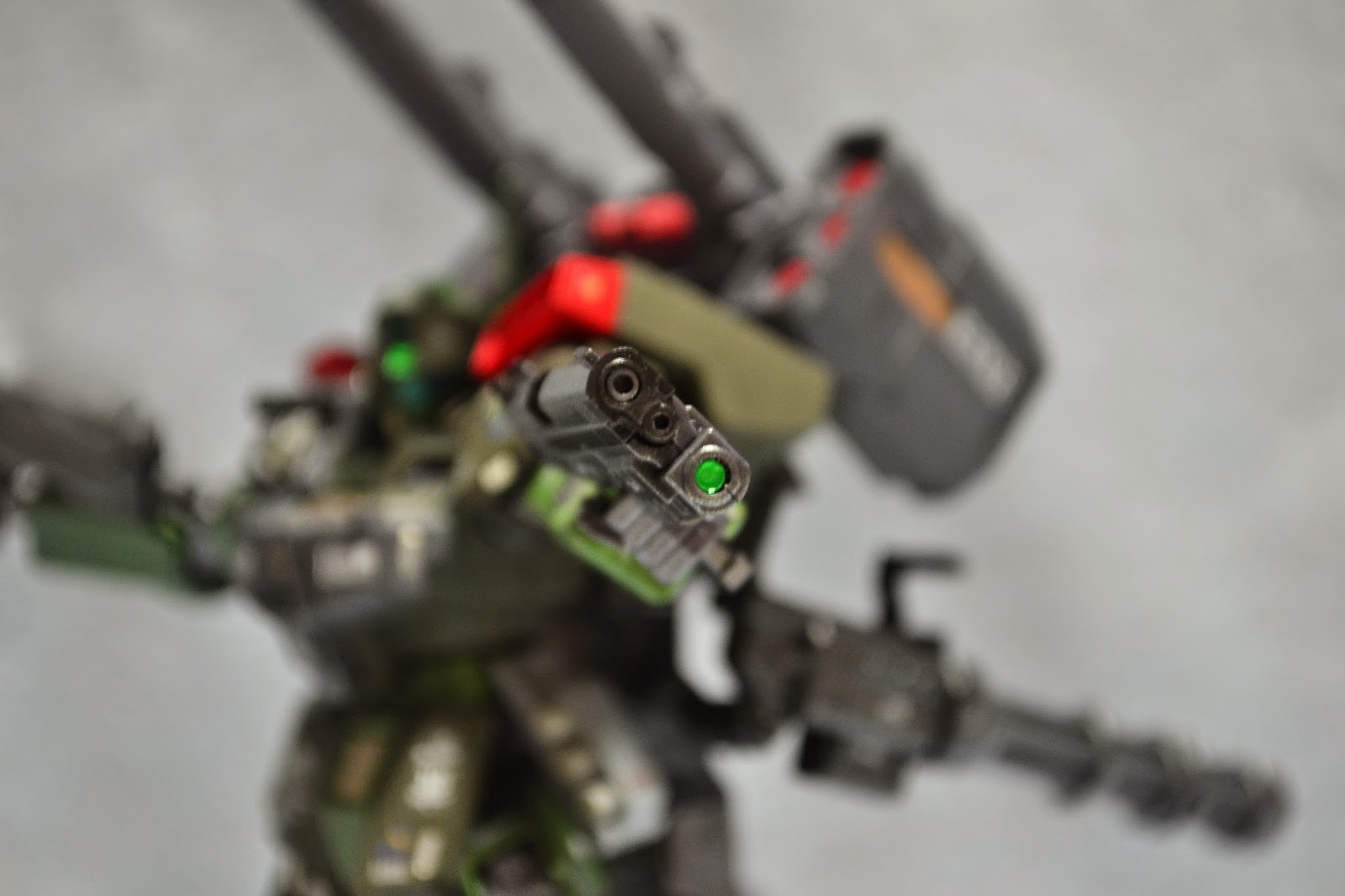 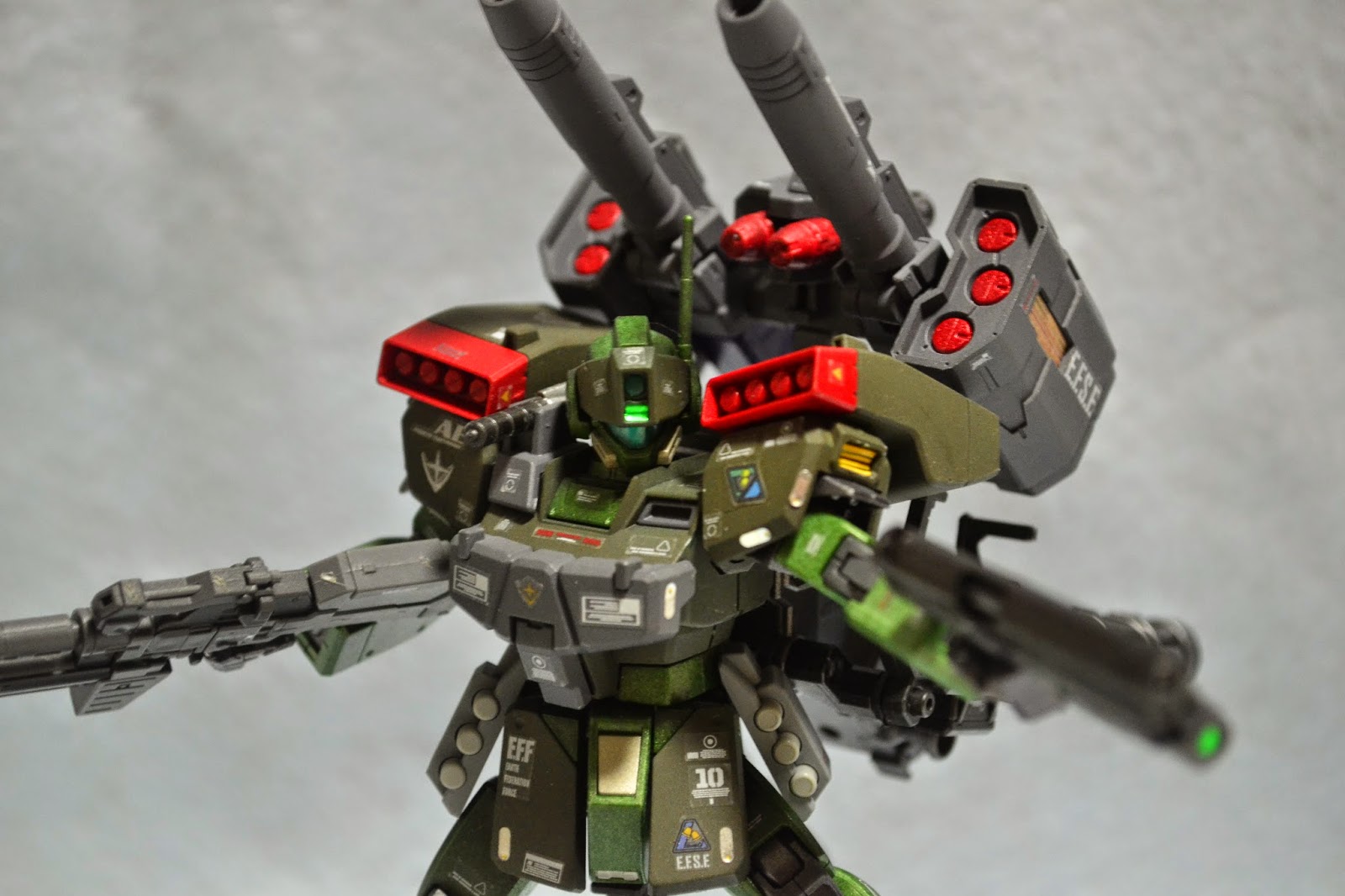 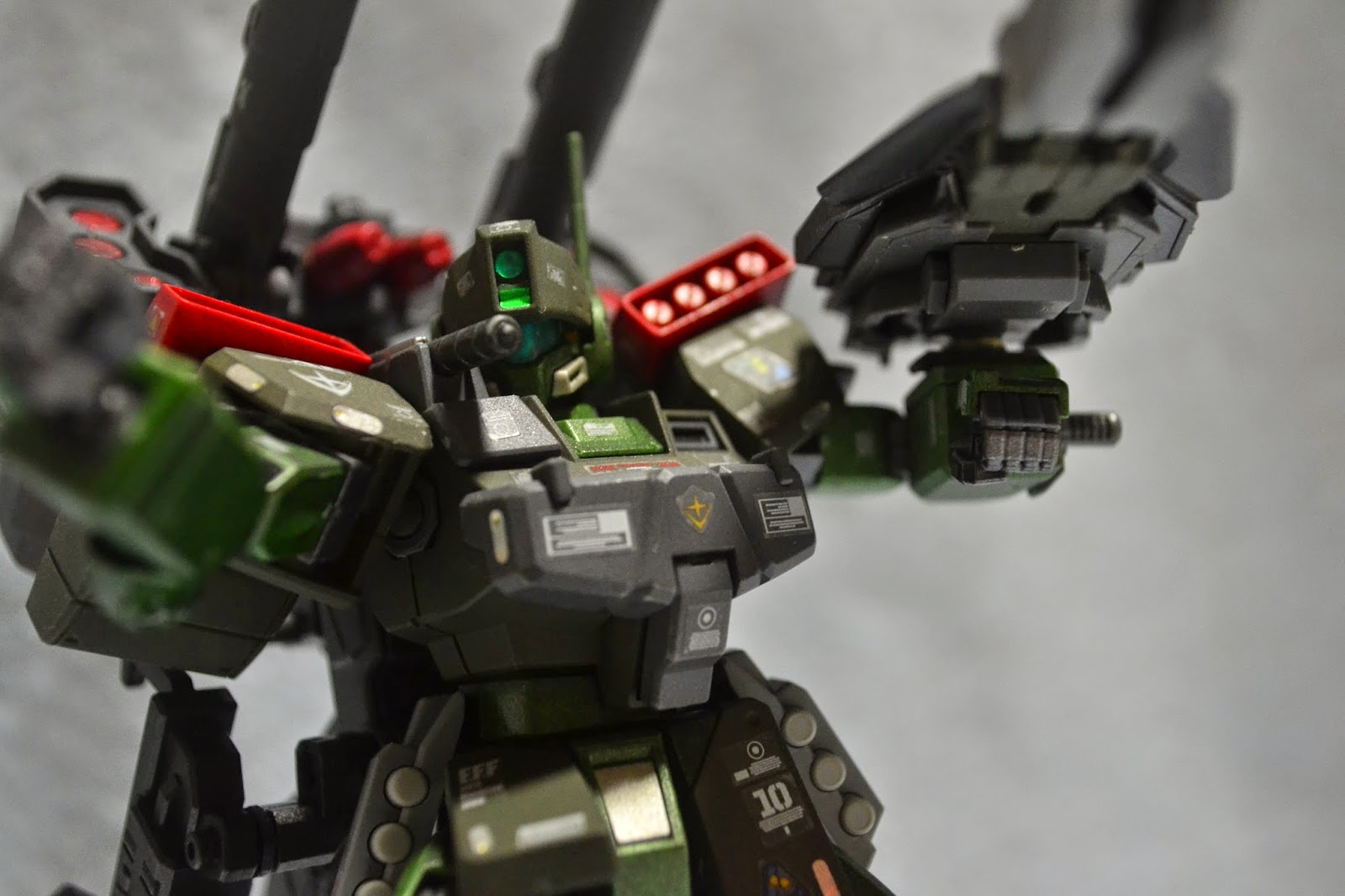 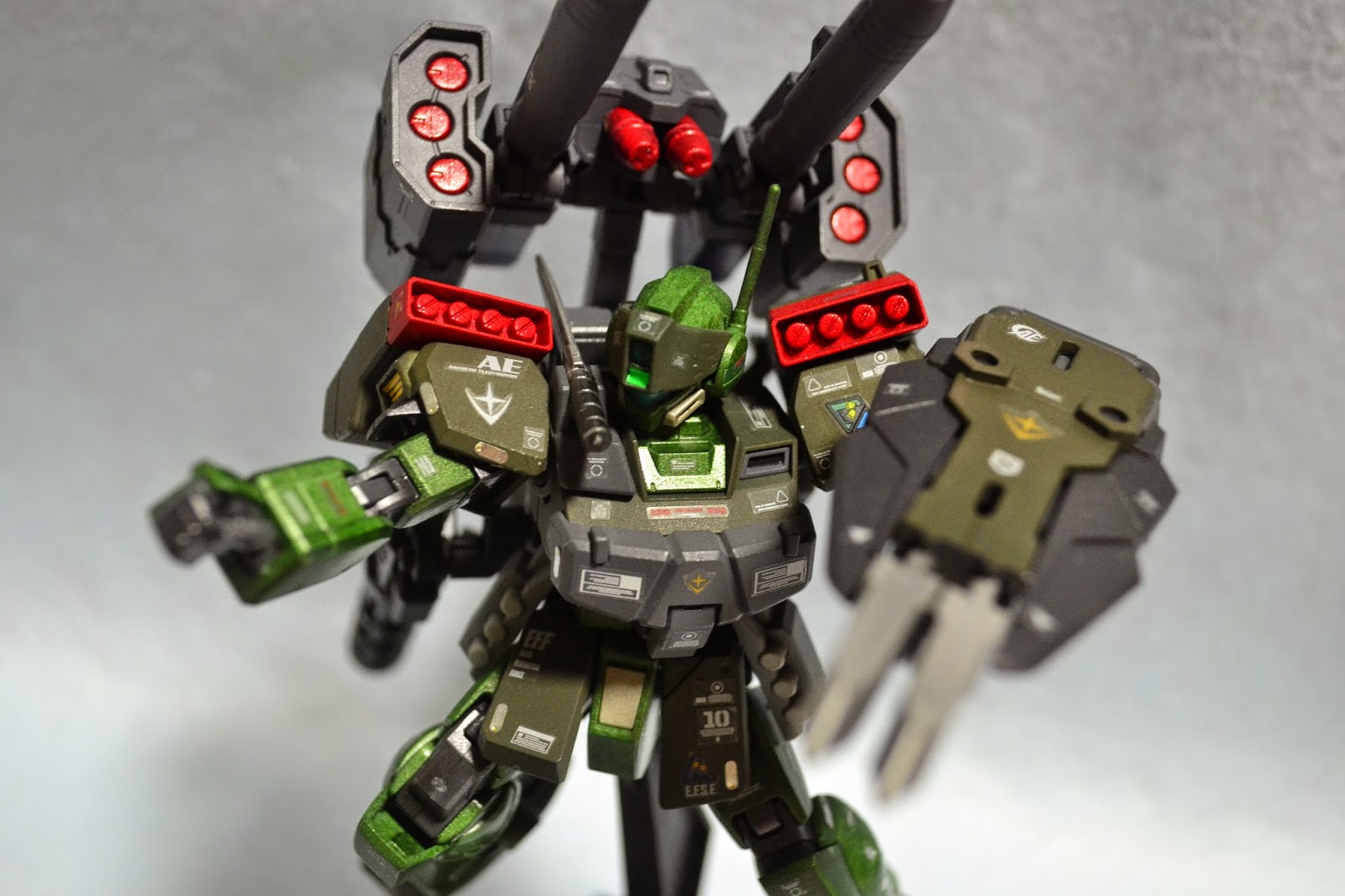 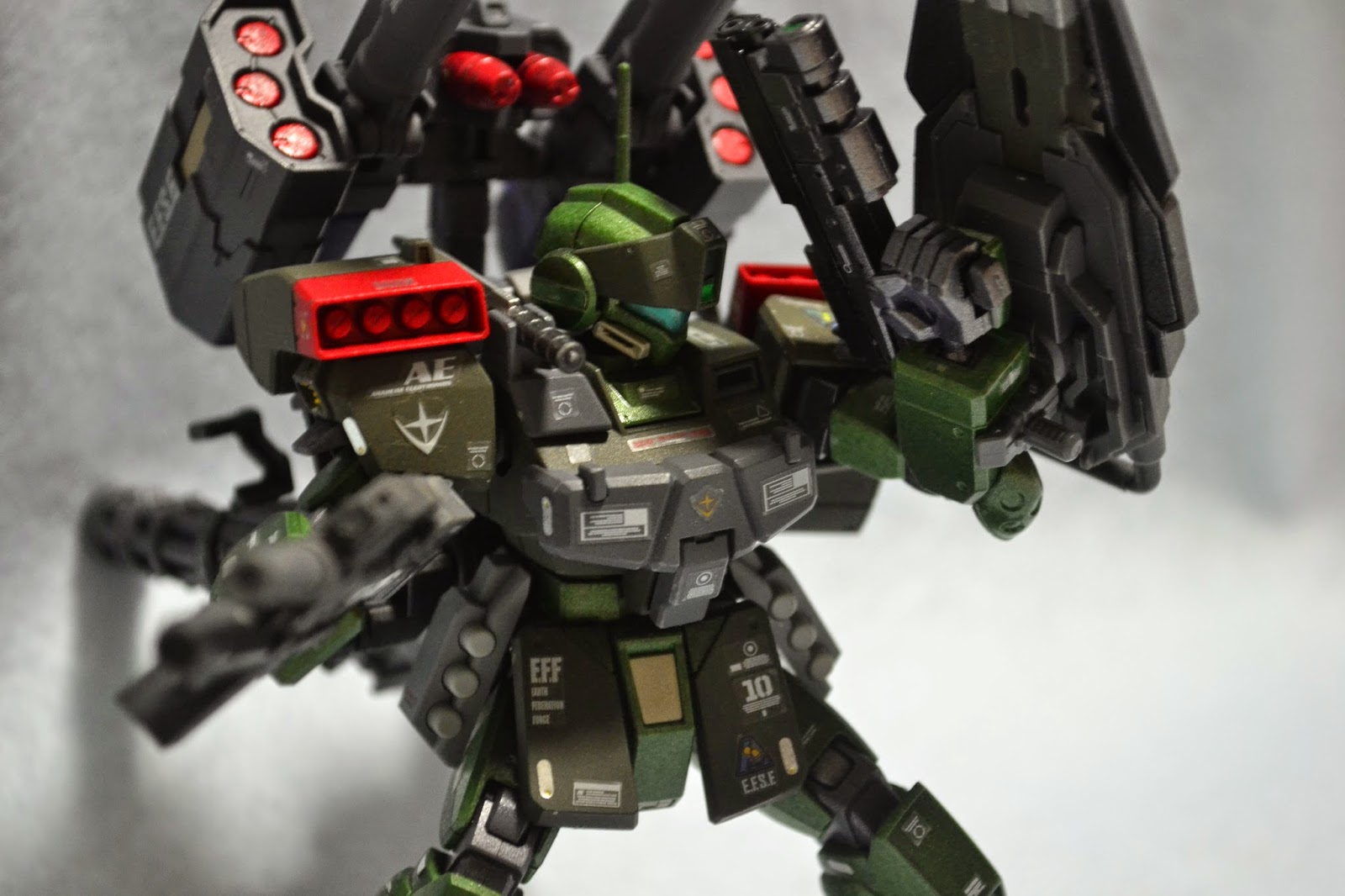 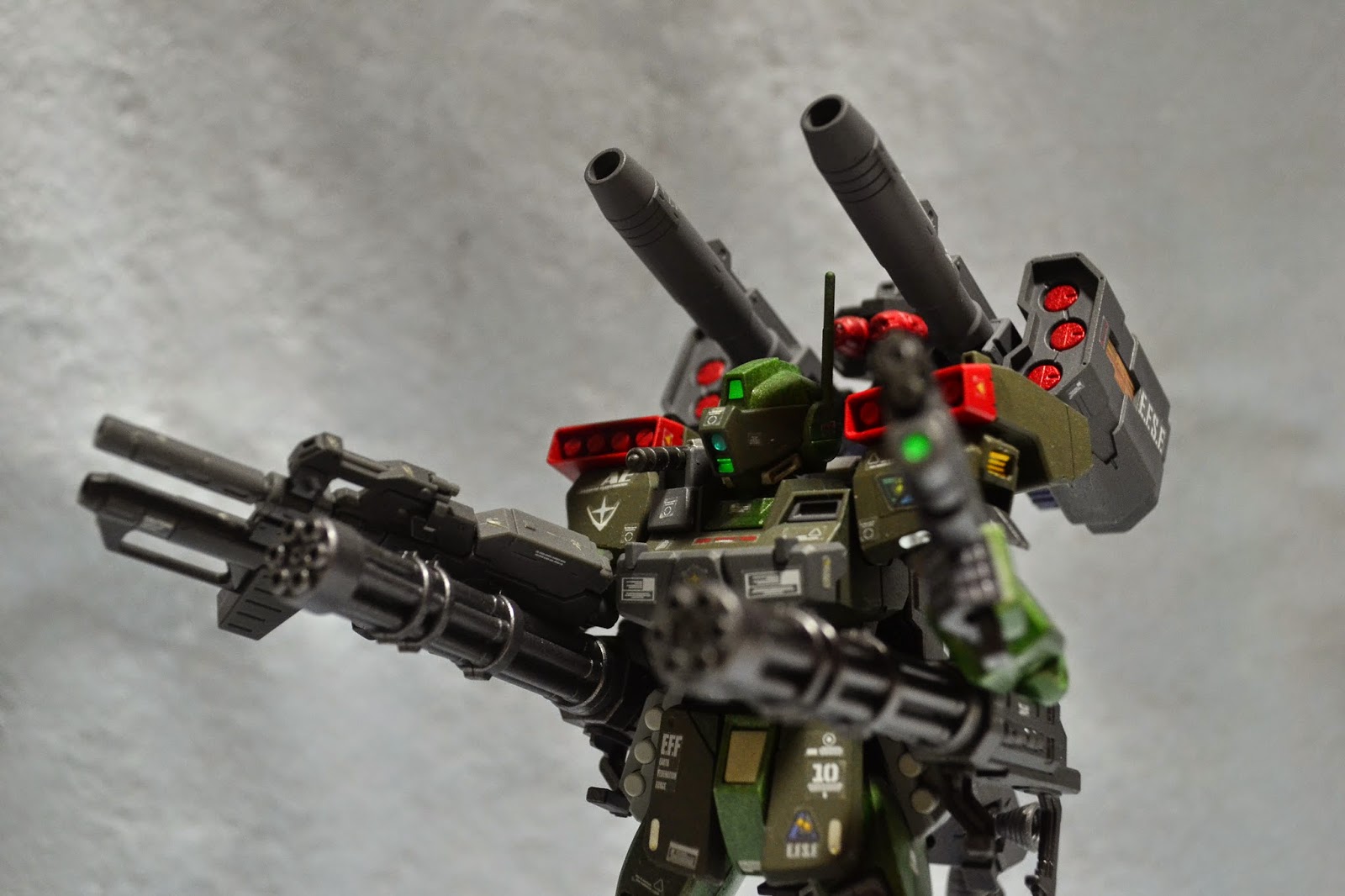 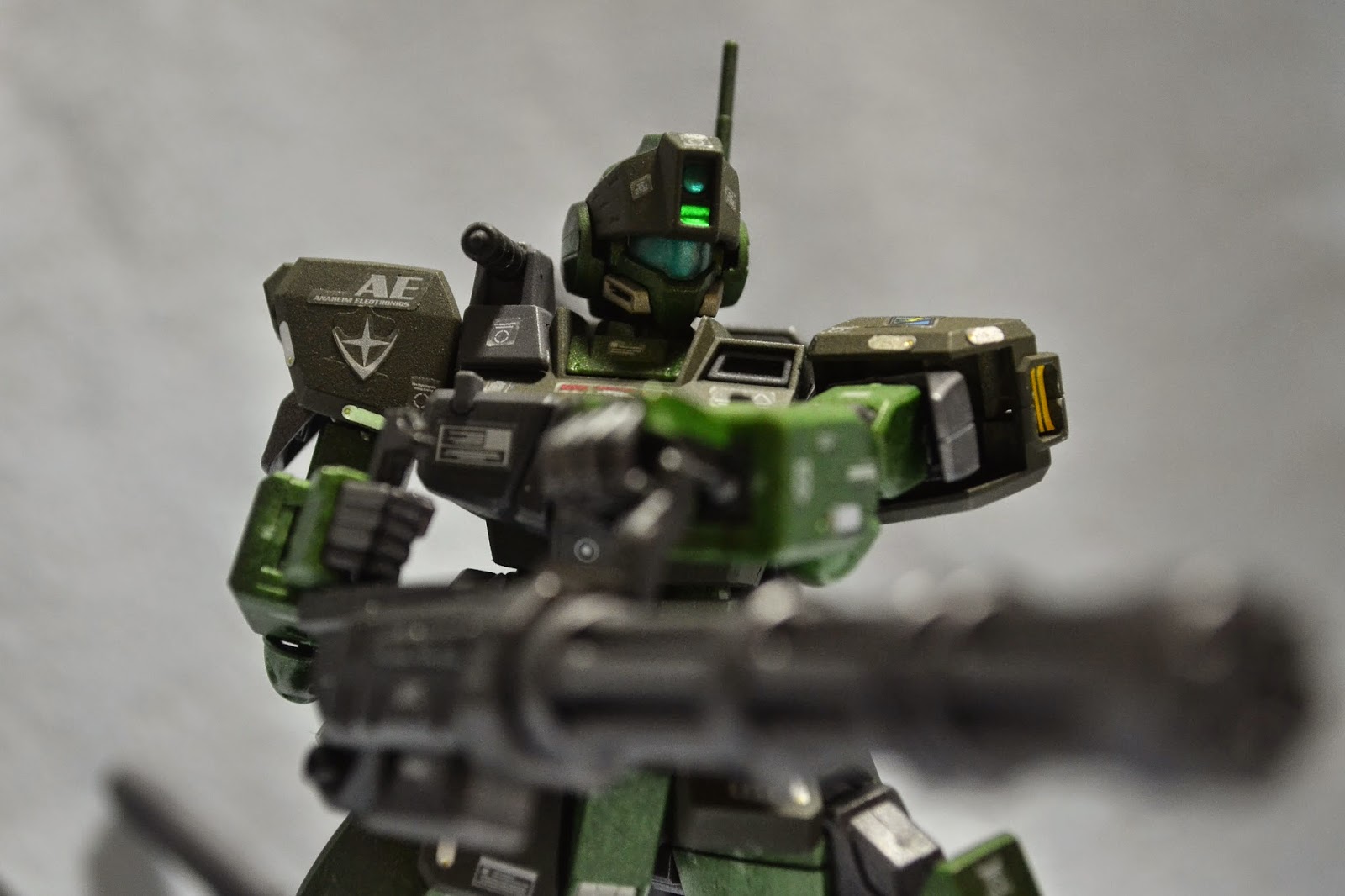 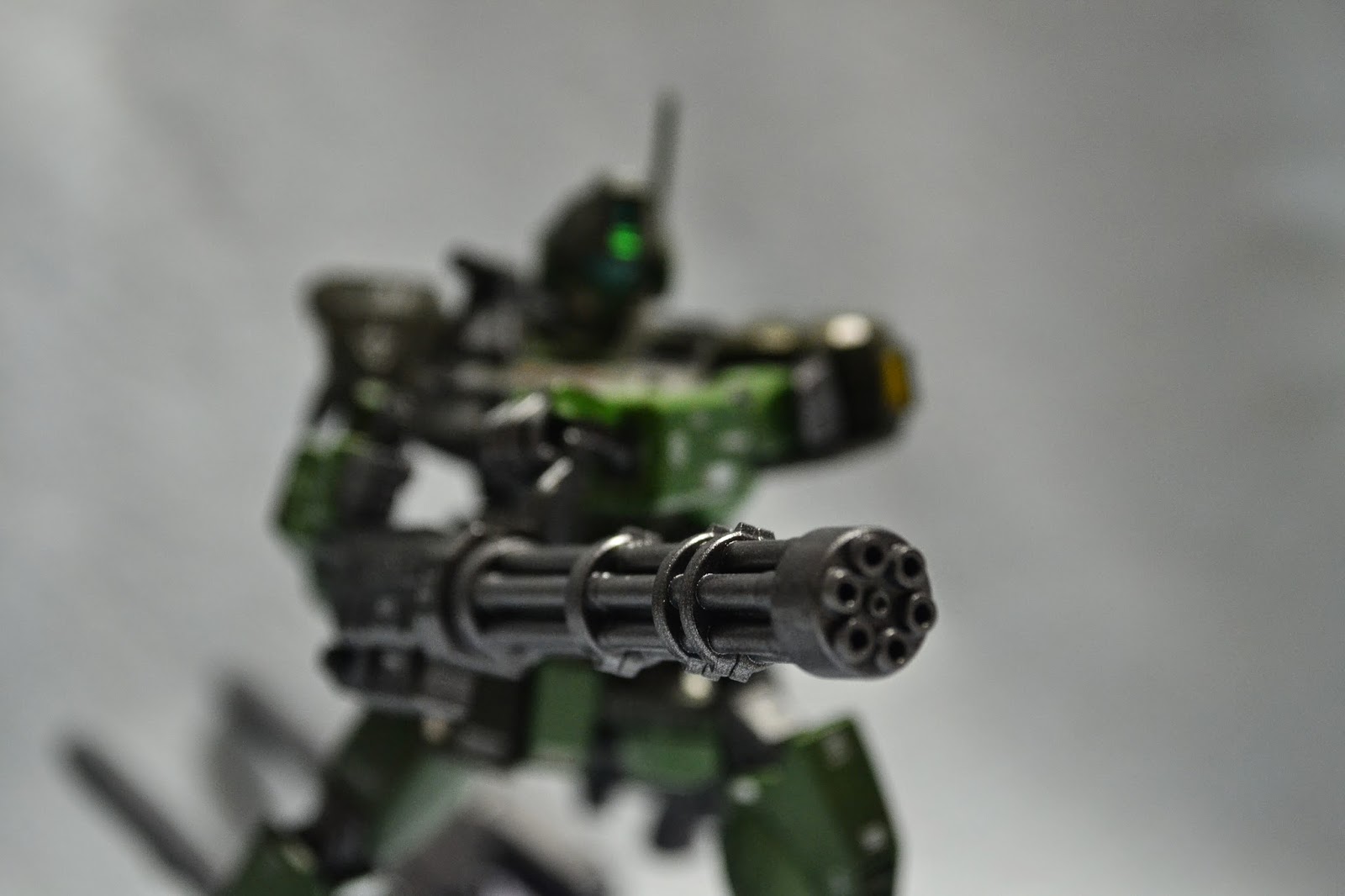 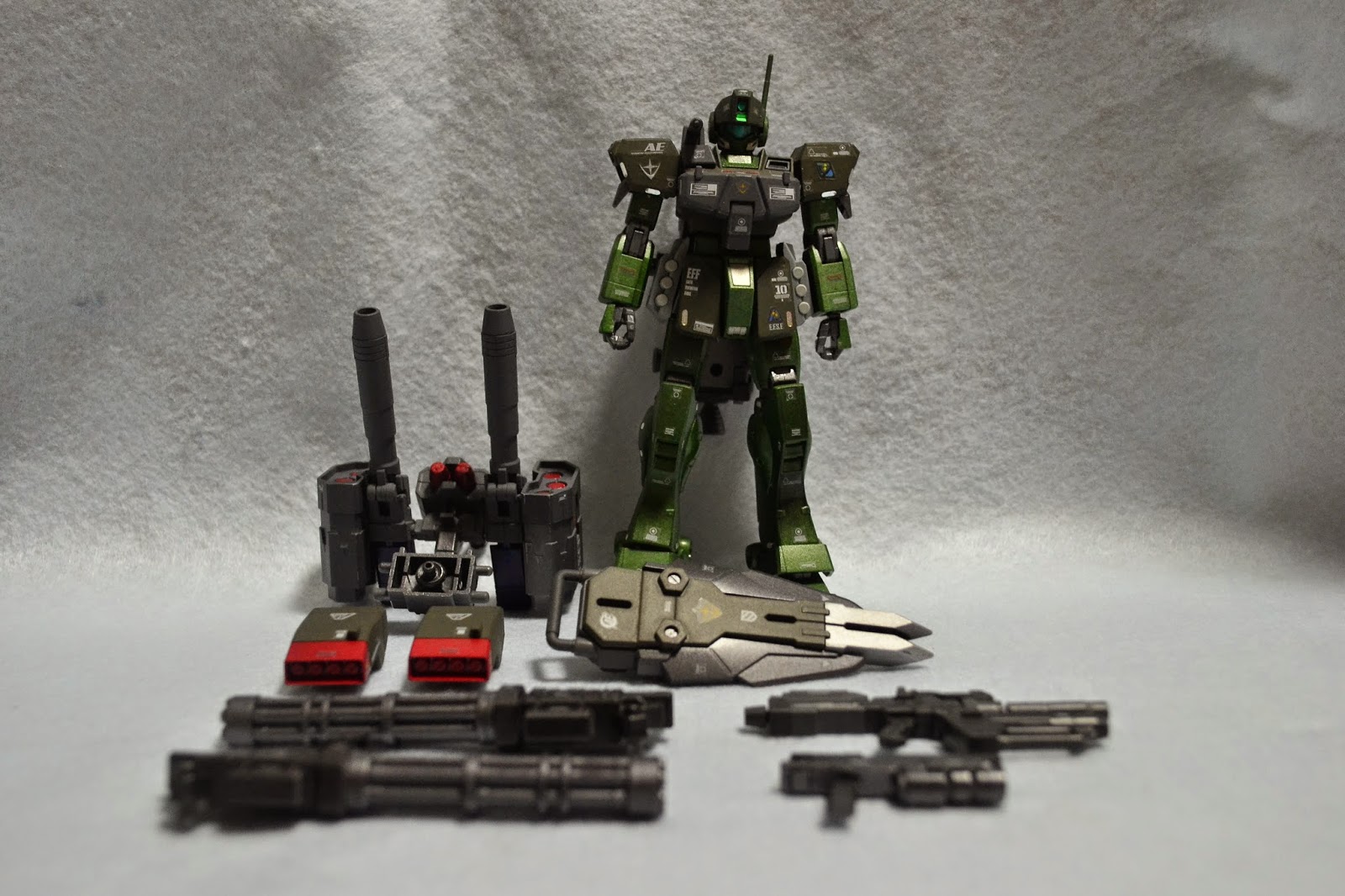 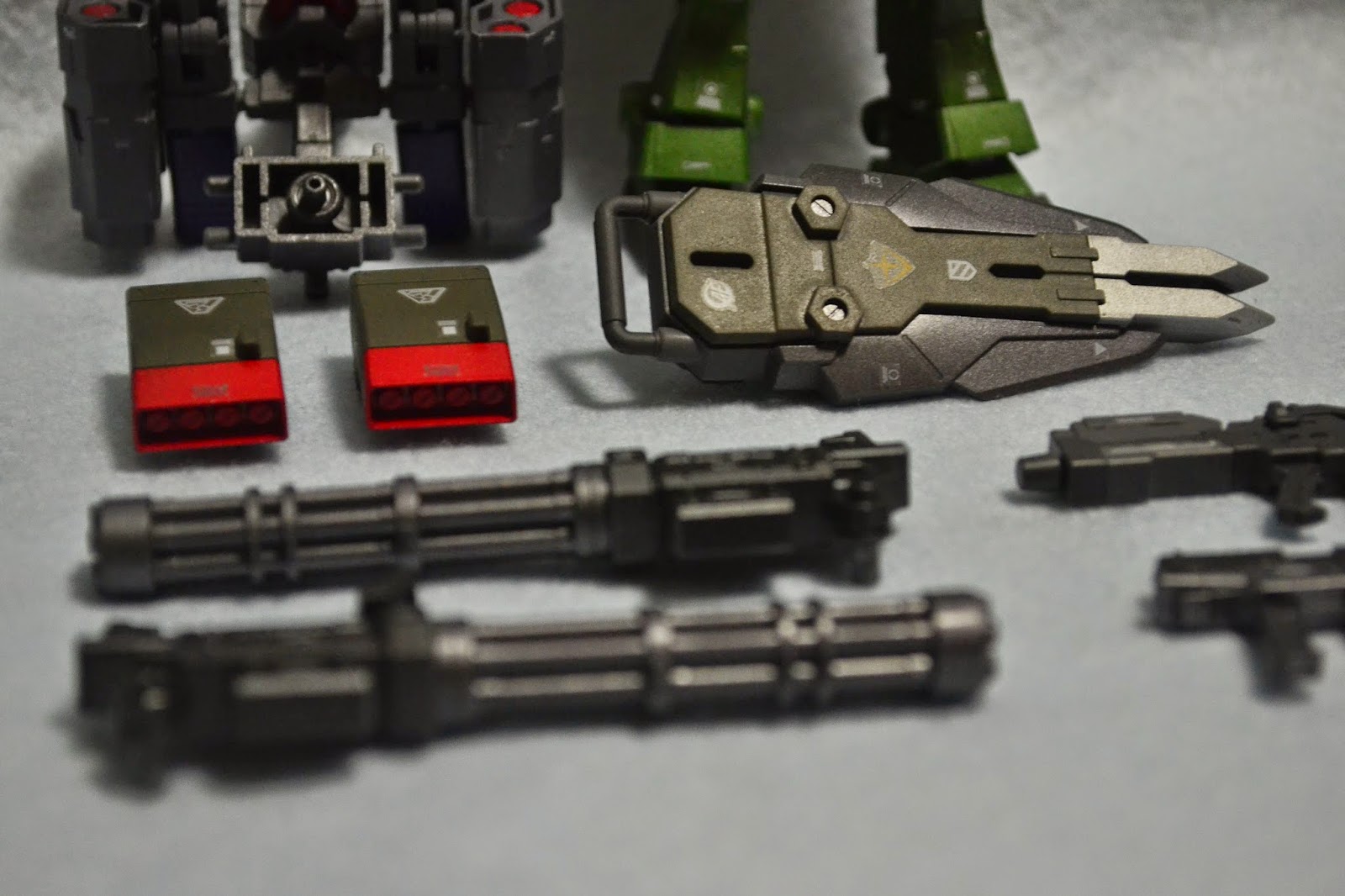 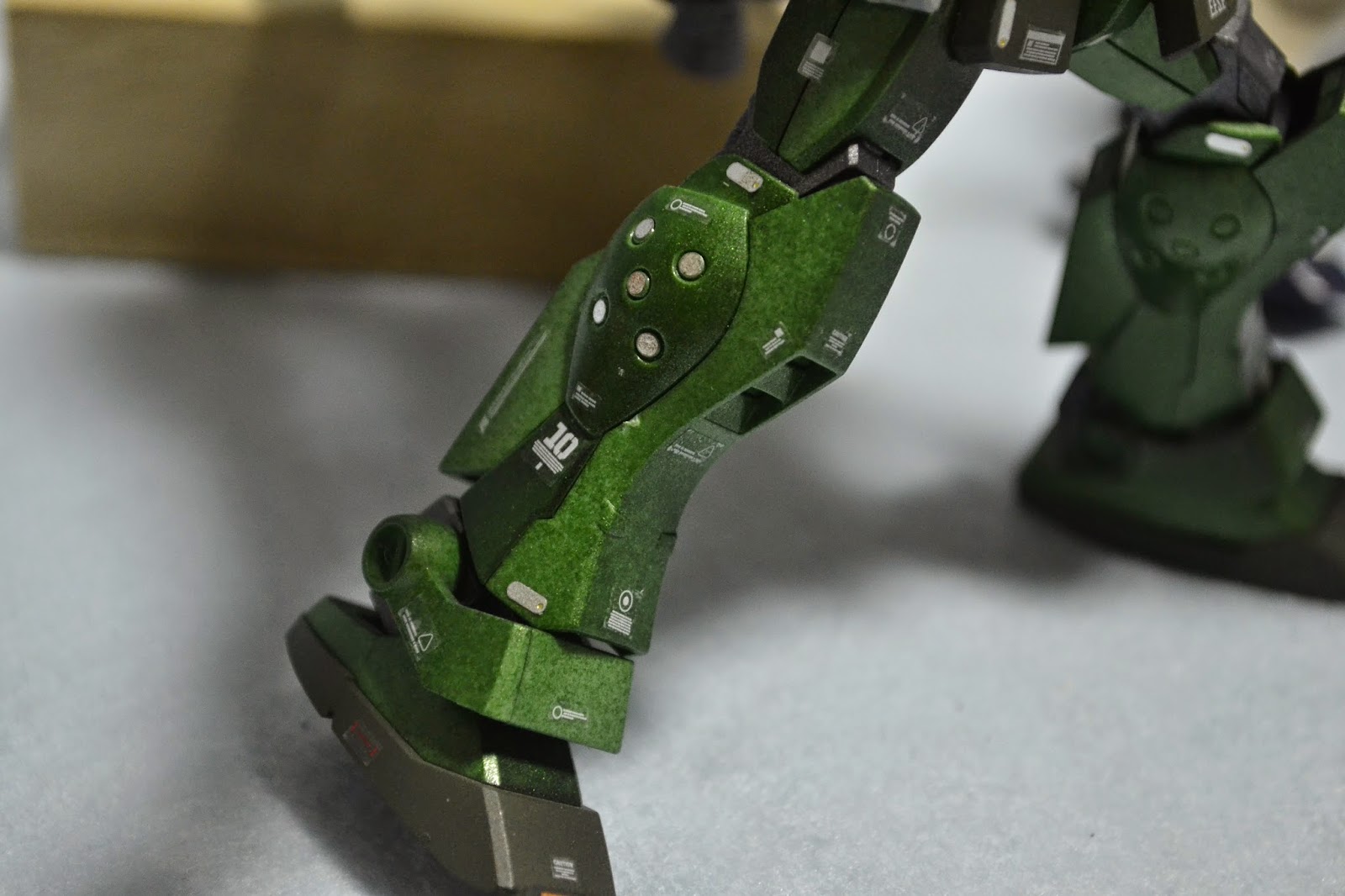 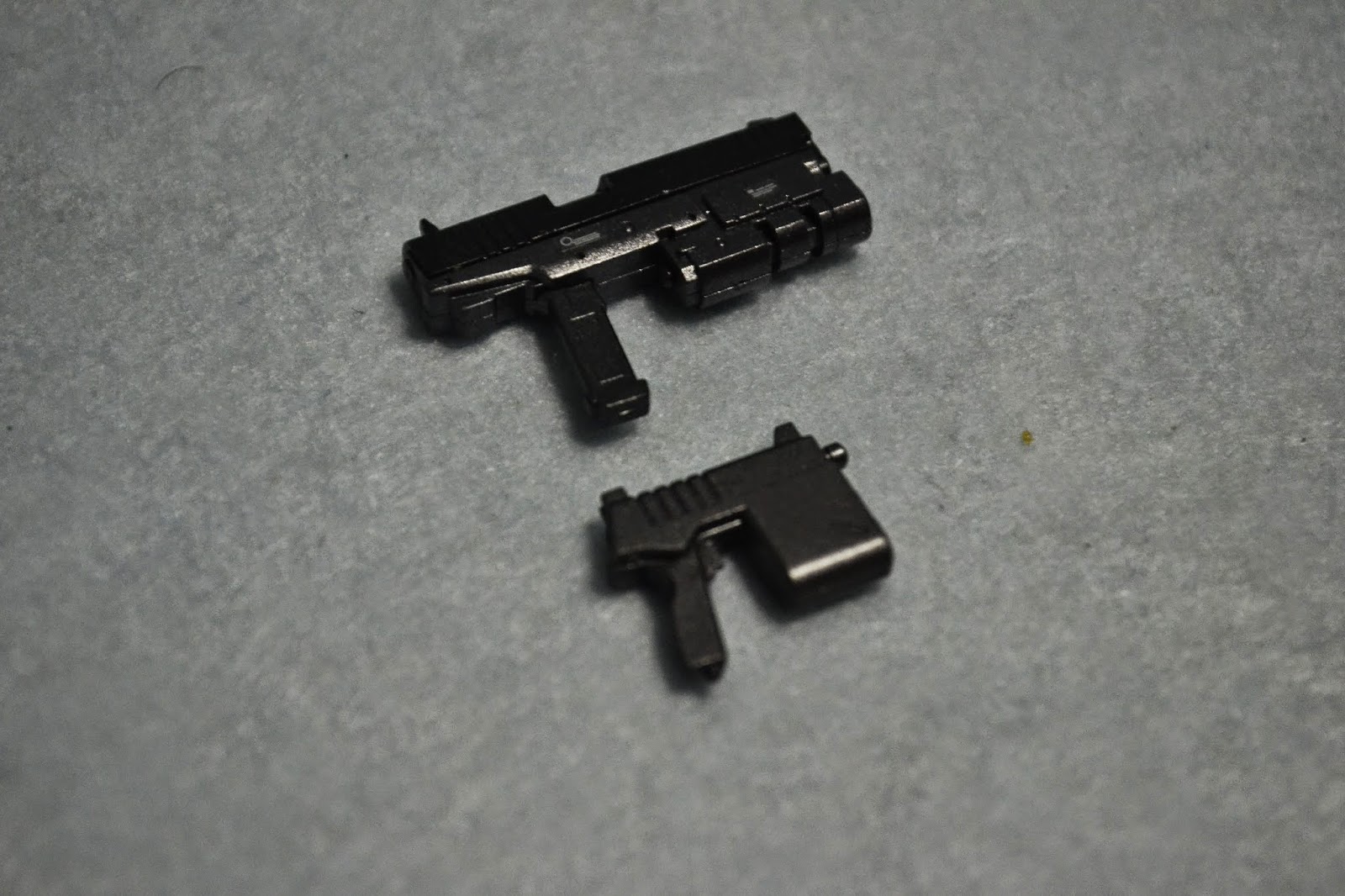 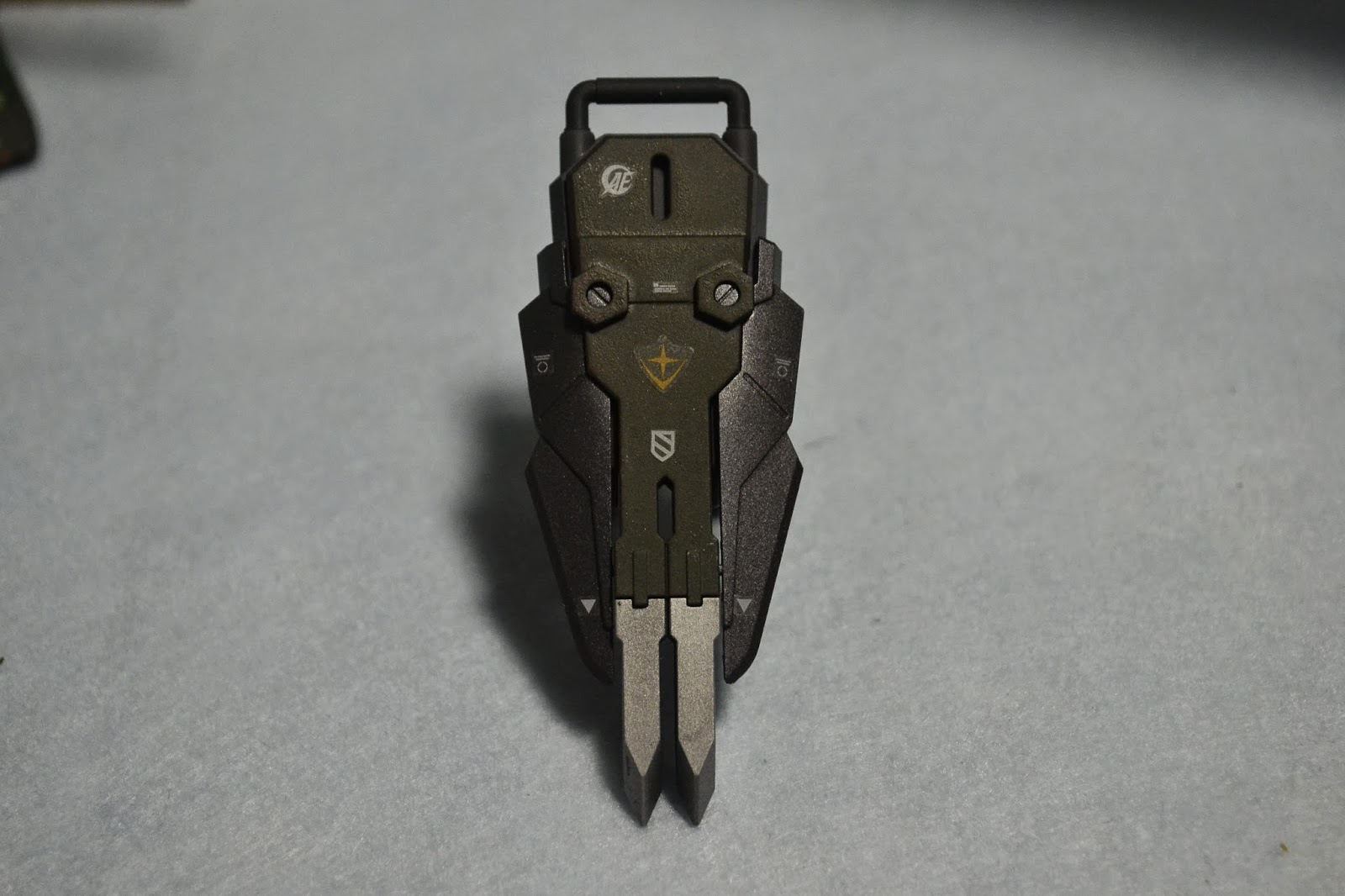 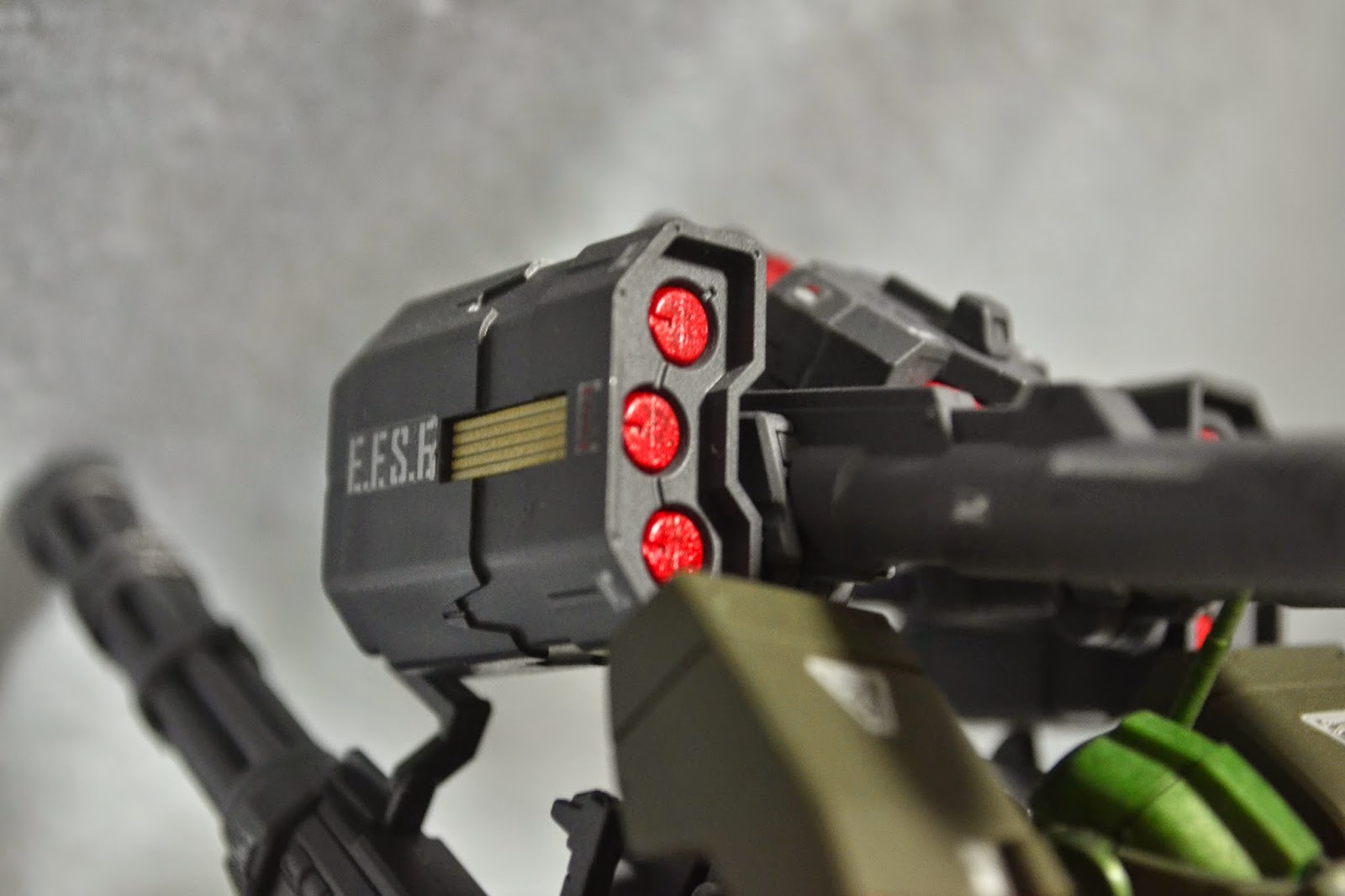 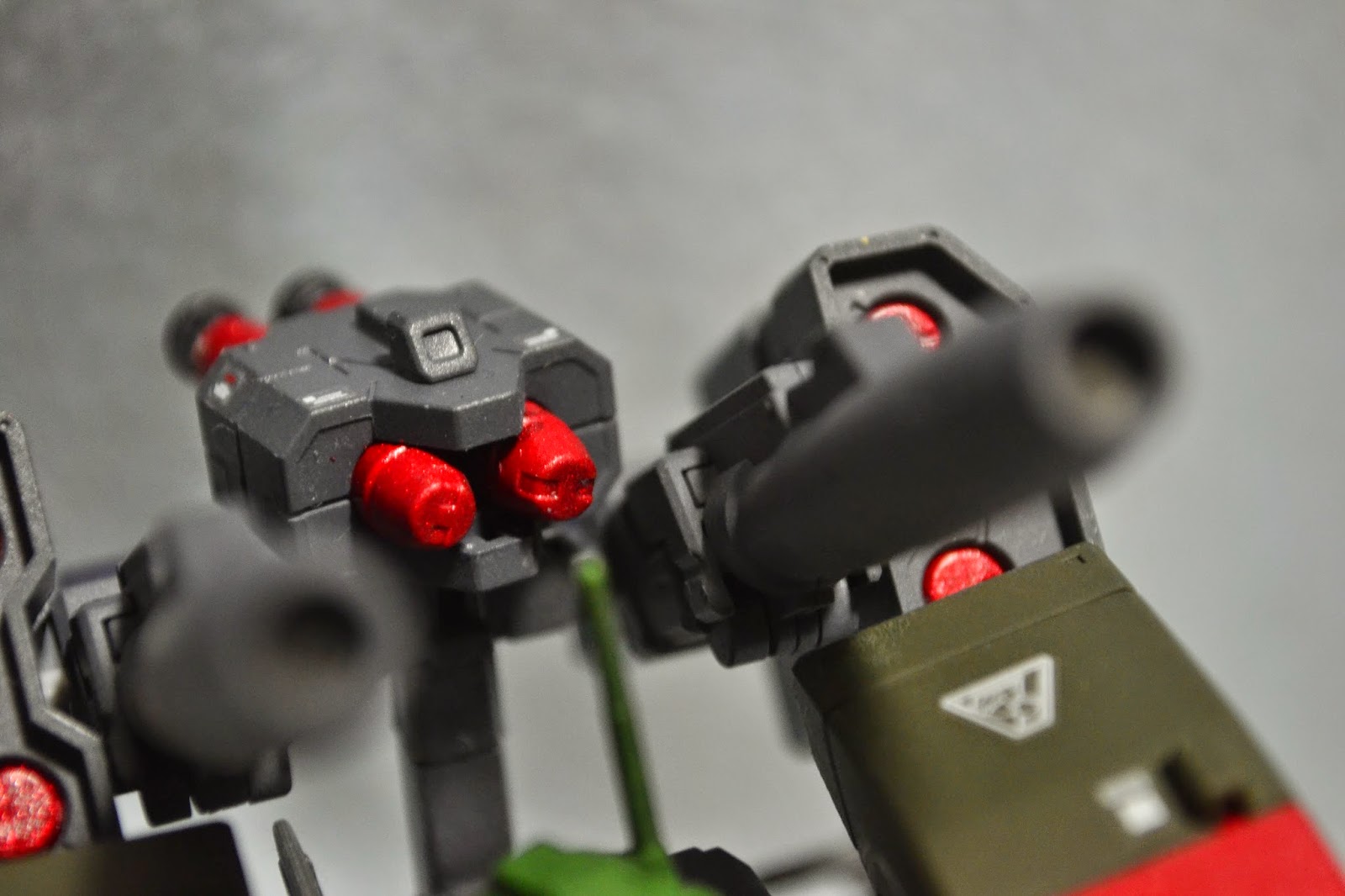 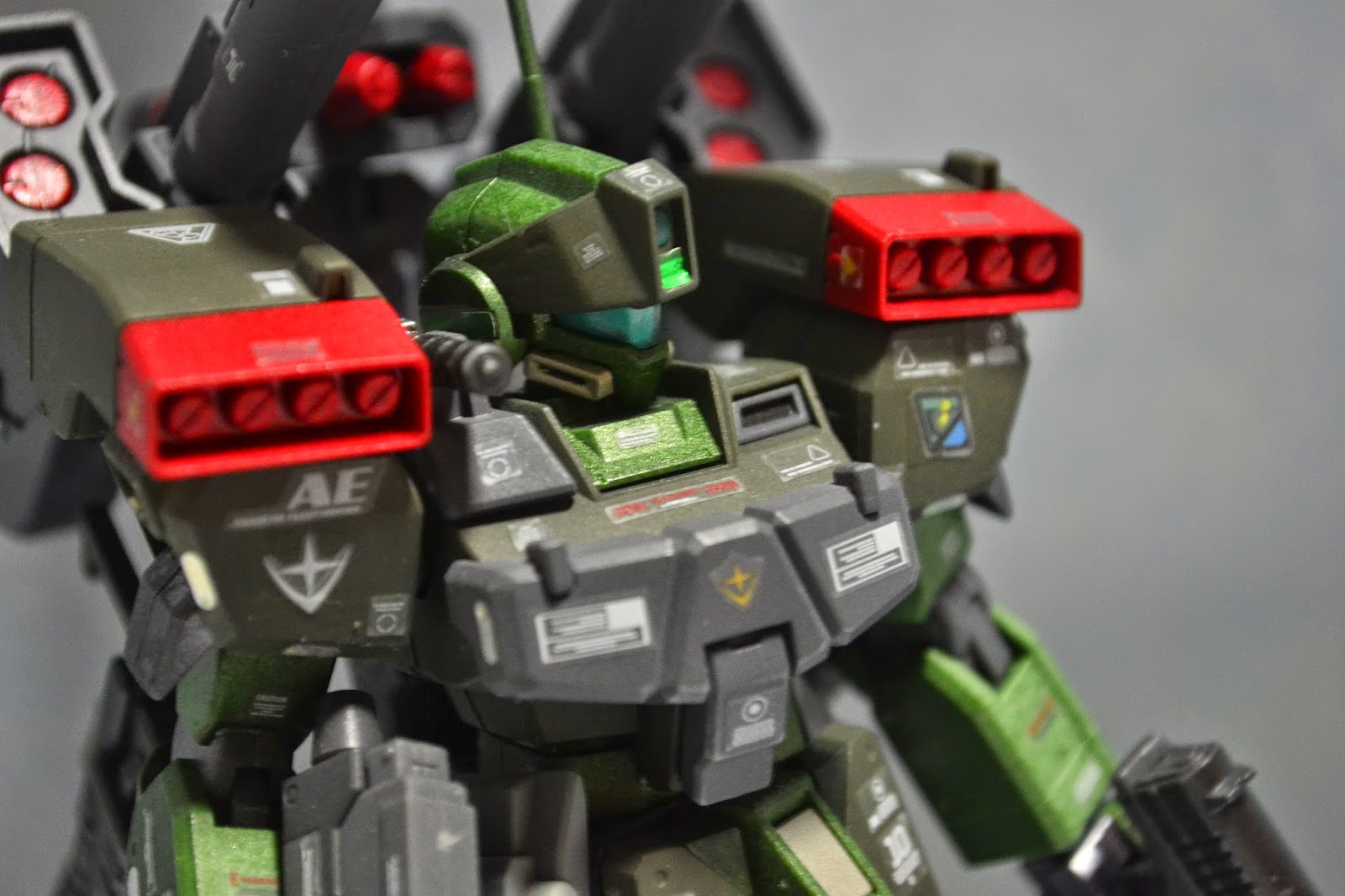 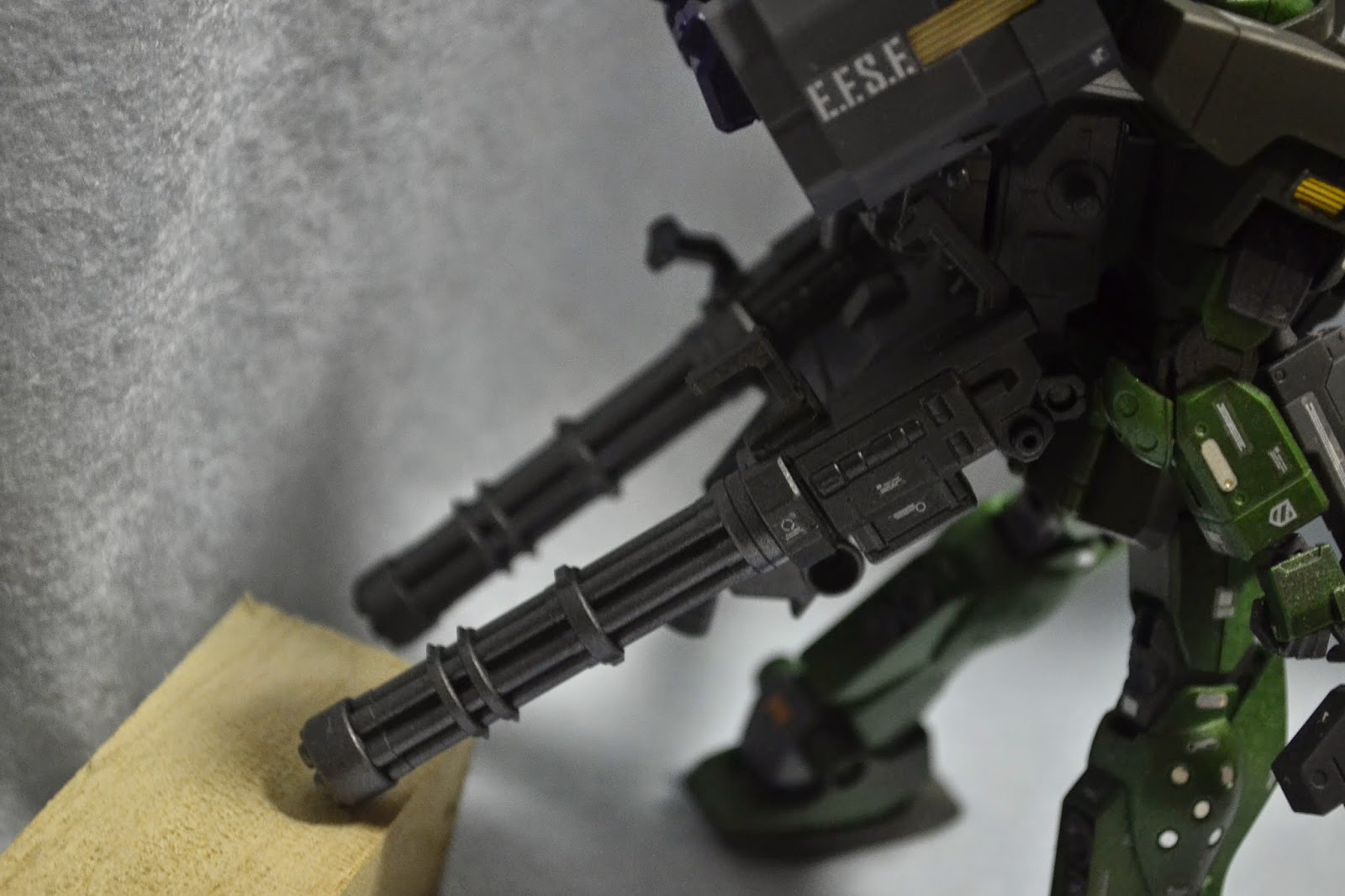