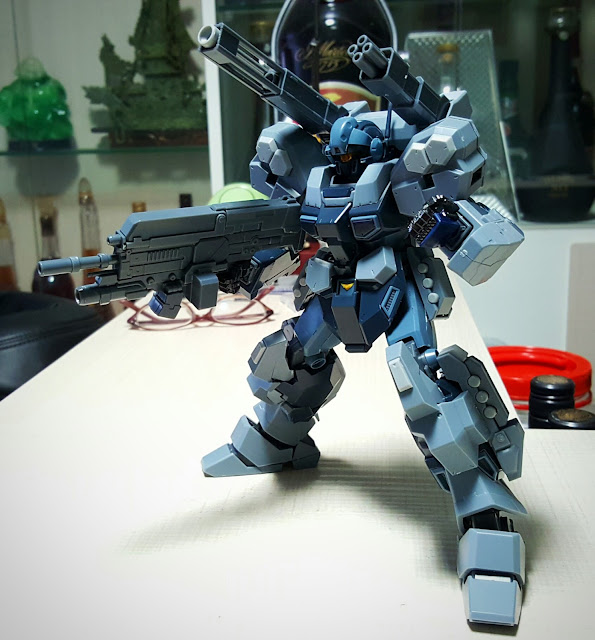 If you've have been following this blog (thank you) or my Instagram account (@gunplanerd) for a while, you'd have noticed that I don't not discriminate between Gunpla brands, manufacturers and makers. Granted, Bandai will always maintain its lofty position as the developer of excellent model kits, but third party companies and sometimes individuals can also come up with fantastic offerings that Bandai cannot release due to any number of reasons. In addition, the low price tag associated with third party kits can be a godsend to builders-on-a-budget, although they will have to accept the quality accorded by the coin they paid. After all, caveat emptor.

Chinese copycat and model kit bootleg manufacturer Daban has been in the Gunpla circle for many years, having issued many knockoff versions of Bandai model kits. As with bootlegs, quality issues abound, as I've found out having built a number of them. The type of plastic used in earlier Daban kits are of the harder variety, and fingers screamed whenever parts failed to snap fit. A pair of pliers is actually a required tool when building Daban kits, along with sheer determination and endless endurance. With regards to the above reasons, I wouldn't recommend getting any Daban kits as the trauma is not worth the low (low!) price tag.

Lately however, Daban has been stepping up its game. Its recent releases came fast and furious: Master Grades, High Grades in rapid succession. Builders around me have said that these newer Daban releases are actually pretty good, although still notches below superior Bandai quality, but nevertheless very worthwhile for the amount of money paid for them. Intrigued, I was contemplating picking a set up just to see how far Daban has come. So when Daban dropped the MG 1/100 Jesta Cannon model kit, I ordered it in a heartbeat.


The MG 1/100 Jesta Cannon only exists as a P-Bandai webstore exclusive, retailing for S$71 before shipping. By comparison, Daban's Jesta Cannon is a regular release that costs only S$25, inclusive of shipping. Also, the Daban version comes with a third party red LED unit, which is excluded in the P-Bandai model kit. These red LED units are sold as a separate set also on the P-Bandai webstore, for S$16 (one pair), before shipping. Therefore, for the low (low!) price, Daban's latest model kit knockoff is actually pretty damn worth it!

The whole set comes with a heckload of plastic, containing every part you need to build either the Jesta Cannon or regular Jesta. You get parts to build both the Jesta Cannon's Beam Carbine and the regular Carbine, although you'll need to find another extra PC-23 or modify the parts to fit the EoTECH-ish scope if you want to dual wield both weapons. The Jesta's movable shield is also included in the package, complete with the backpack-mounted armature. You also get a sheet of waterslide decals with the Jesta Cannon's logos and warning signs as well as a tiny sticker sheet.

When I began to build the Jesta Cannon, I was pleasantly surprised. The issues I had with previous Daban kits have all evaporated, replaced with decently reproduced parts that snap together smoothly. Gone were the days where pliers are required, the fitment is actually on par - if not better - than most other third party brands. The plastic used is also softer, which is actually a double-edged sword as the nub marks left are very obvious and ugly. As this was just a test kit, I didn't bother with removing nub marks at all, as my interest was steadily growing as I'm building up the Jesta Cannon.

Being a bootleg product at its core, excessive flashing is still evident on some parts due to insufficient quality control, but these are now confined to tiny recesses of a small number of parts as compared to huge, jarring edges on almost every runner in the past. In some areas, fitment can be a little tight, but with care, you wouldn't encounter any significant issues. The only gripe I have are the movable-type hands that come with the kit: somehow, third party companies have yet to produce a decent replication of these parts, but I'm surprised that I didn't break them while cutting them out. Anyway, I swapped out the hands for MS Builders Parts - MS Hand 01, those look much better on the Jesta Cannon.

Articulation-wise, the Jesta Cannon performs admirably, given that its a heavy-armor mobile suit. Naturally, flexibility is restricted in areas where armor is thickest, but the kit is generally able to strike most poses easily. The leg unit is a wonder: to bend it completely, you have to pull the thigh up to expose more of the inner frame, and the working pistons in the knee area just look fantastic. However, I found it weird that the head unit is unable to tilt down, or in any direction, but I think this is a design issue stemming from Bandai, since Daban doesn't make any R&D input into its replications. 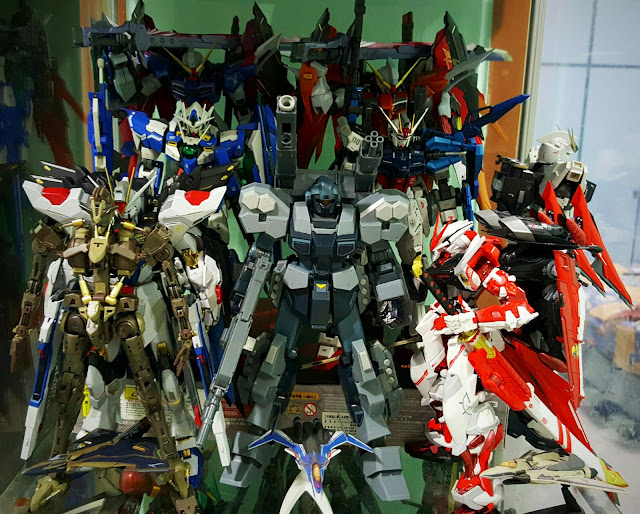 Overall, the Jesta Cannon is well worth its low (low!) price tag and despite its bootleg nature, looks great in my shelf. I can bet that if you didn't tell anyone that it's a Daban, no one will think so. It just looks very, very similar to the real thing. So if you need a cheap, decent kit to practice your modelling techniques on, why not get one of the latest Daban kits? 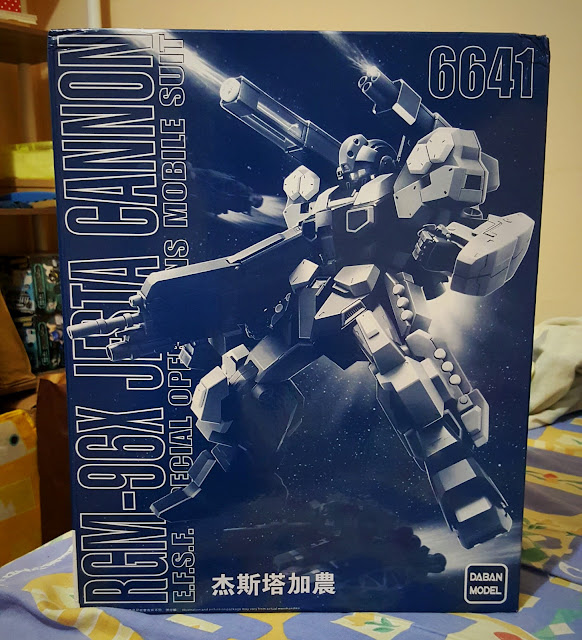 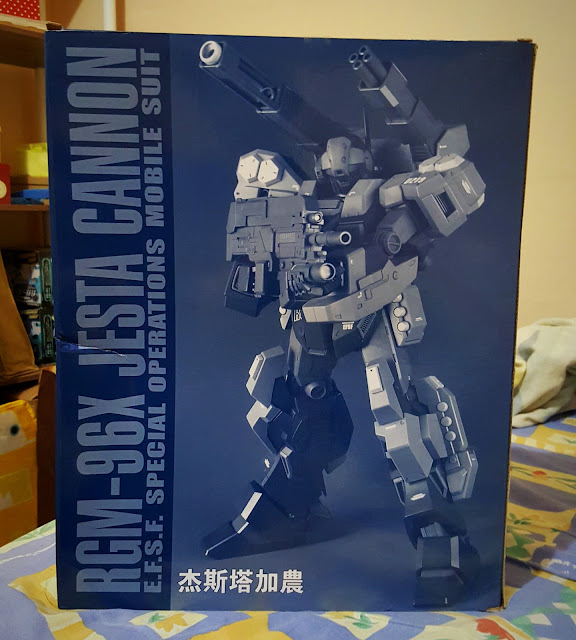 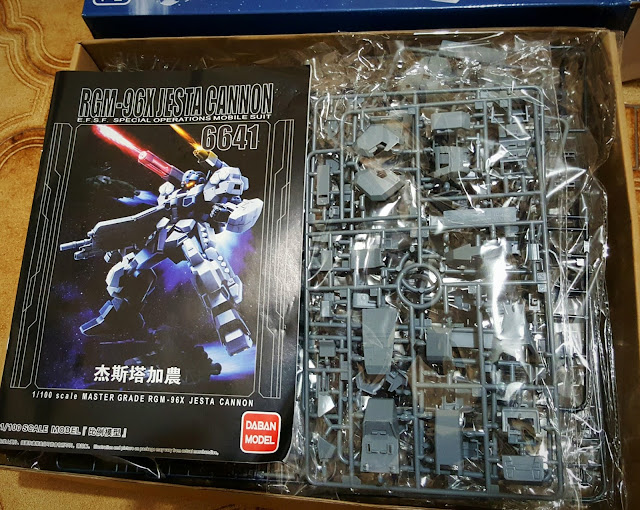 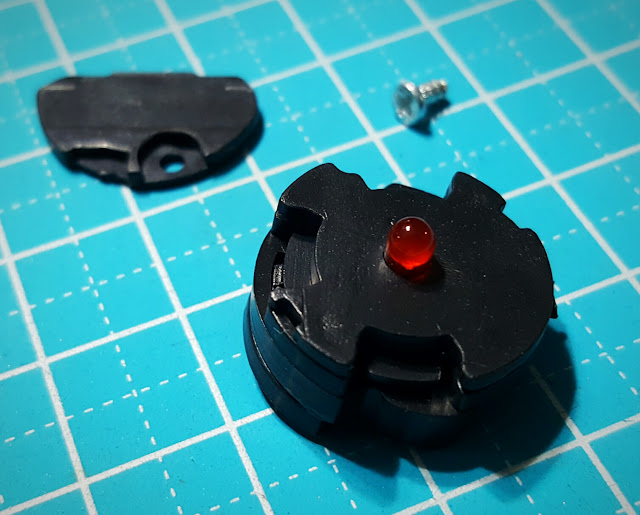 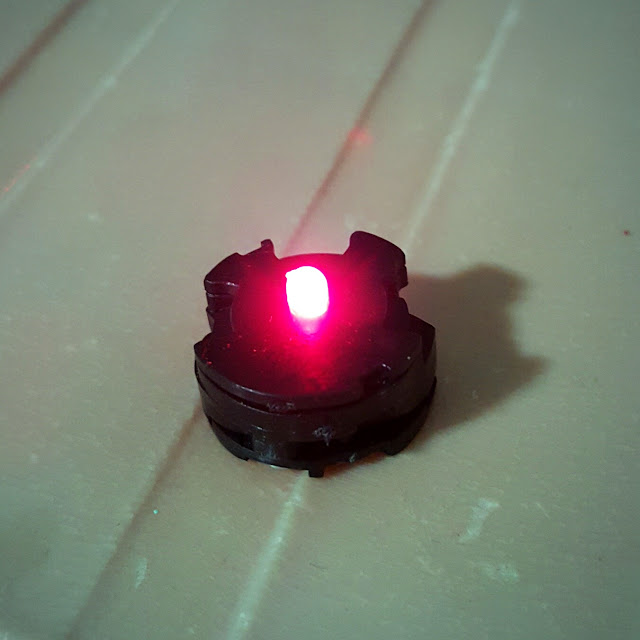 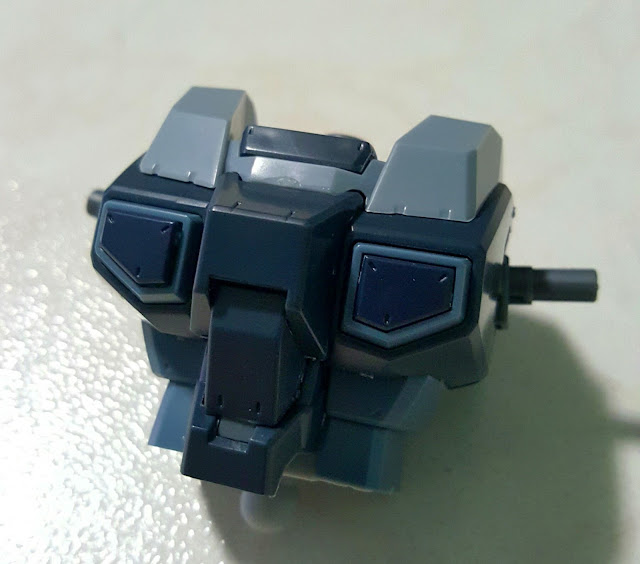 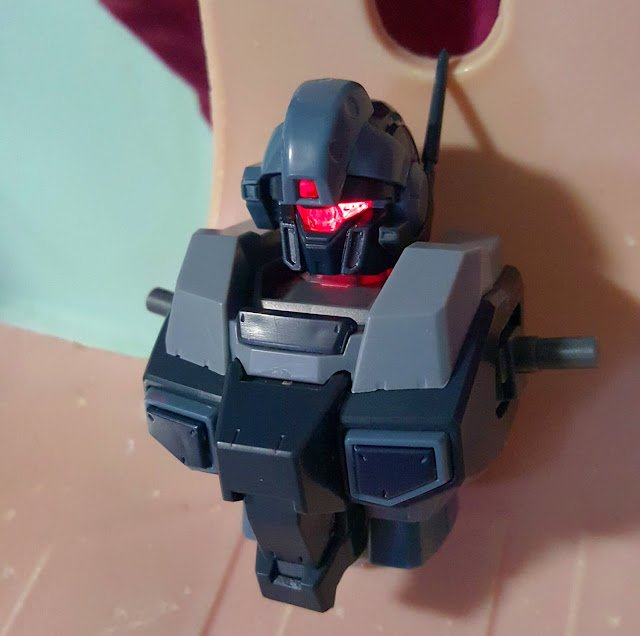 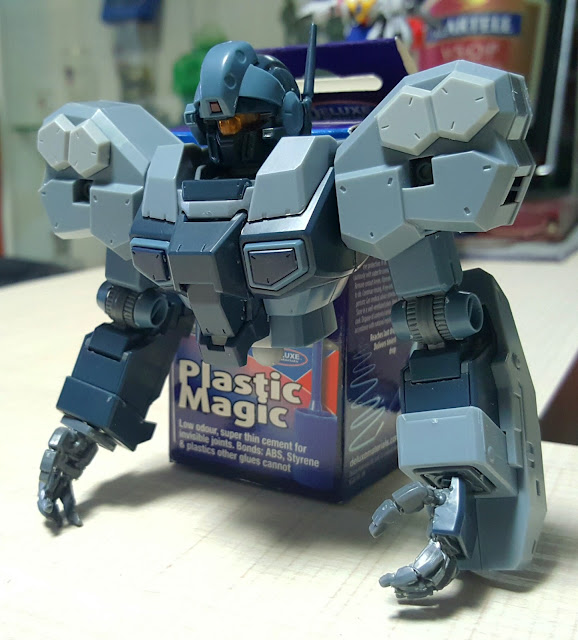 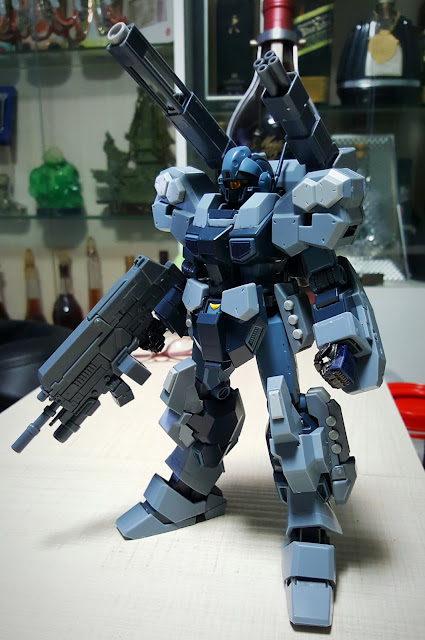 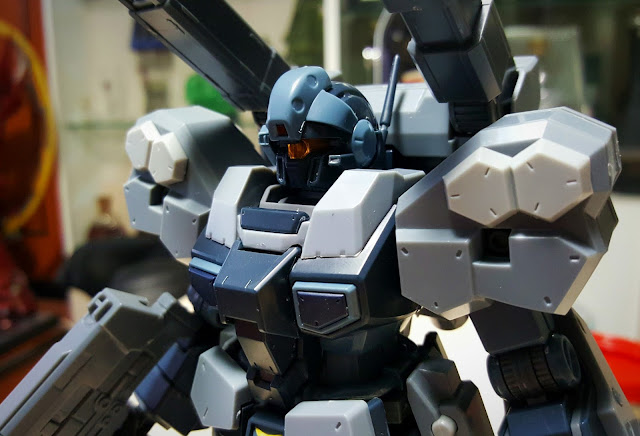 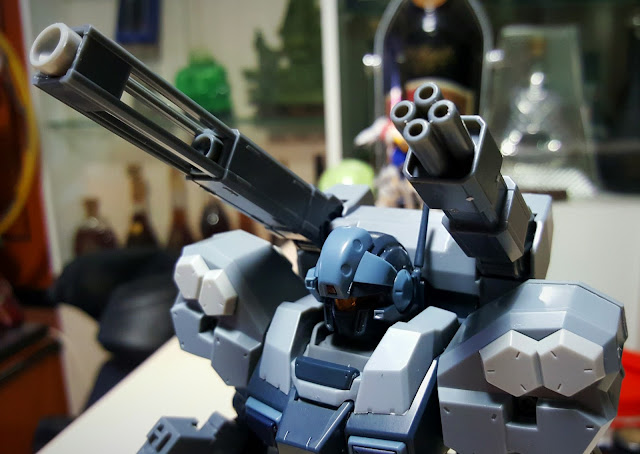 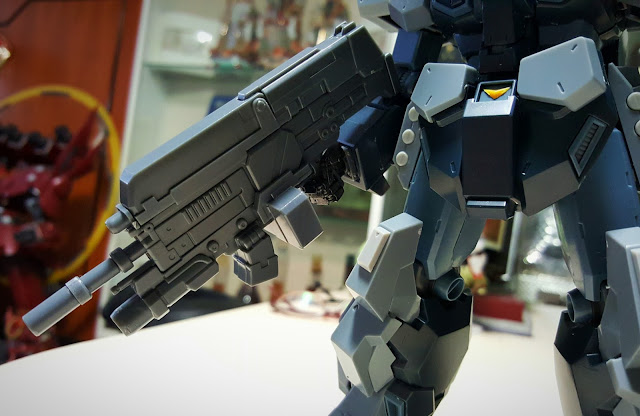 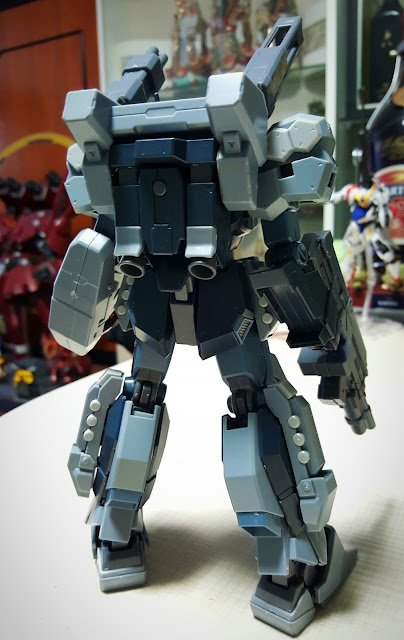 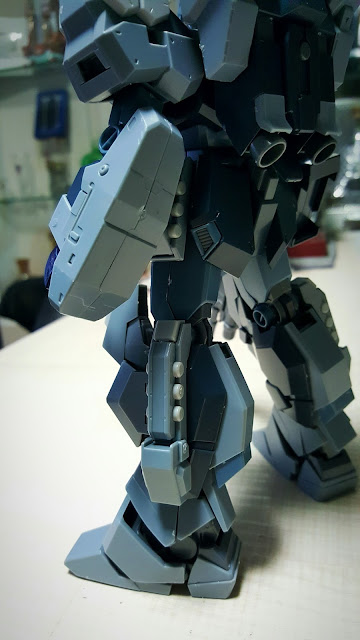 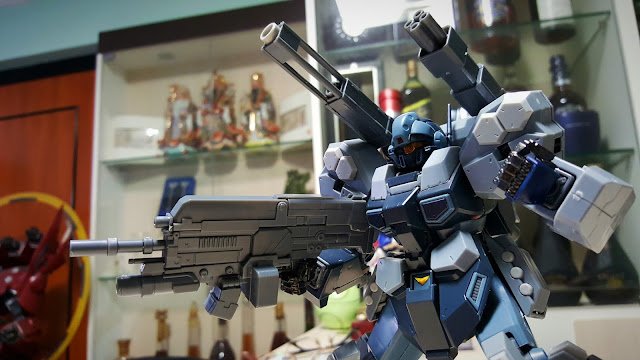 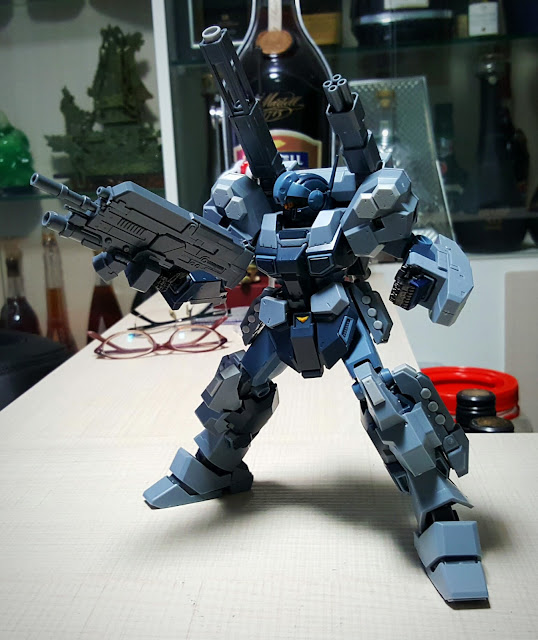 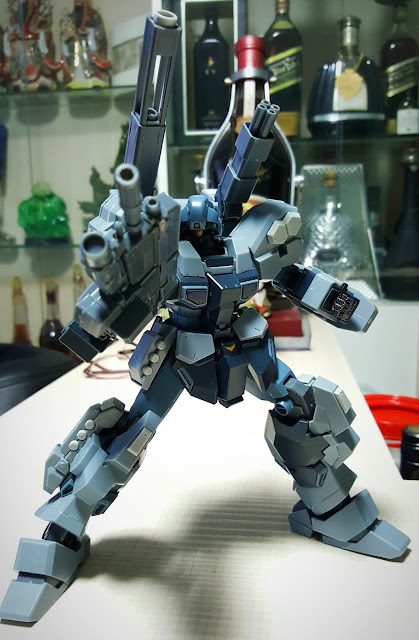 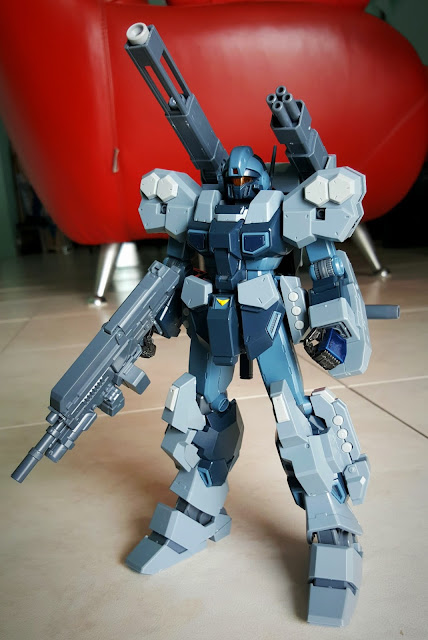 Posted by Gunplanerd at 5:17 PM