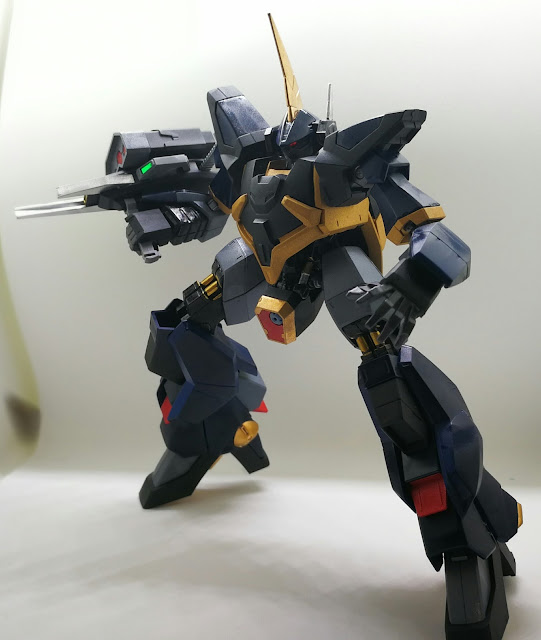 The Barzam is in itself an oxymoron: it is a Federation mobile suit but with the signature monoeye-sensor of Zeon units and it looks nothing like the RX-178 Gundam Mk-II that it was based off, other than the Titans colour scheme. The various design features and characteristics give the Barzam a bestial, oddly appealing look, being the love-child of Federation and Zeon engineering.


As a contender to be the Federation's next flagship mobile suit, the Barzam was designed to be a mass produced grunt unit with high performance that can be distributed to regular Federation forces for general use. Clearly, it was intended to succeed the GM-series of mobile suits as the mainstay of Federation forces.

With mass production in mind, the Barzam was excessively simplified, resulting in a look and feel that was drastically different from contemporary MS. With the torso and waist blocks condensed into a single unit, the Barzam's final form was not different from that of a gorilla, its long arms and legs further accentuating this resemblance. Built with mobility in mind, the Barzam was fitted with thrusters all over the frame, the bulk of these contained in its powerful legs. A single, large red monoeye-sensor protected by an overly ornate head unit gave the Barzam a panoramic view of the battlefield, allowing the capture of more accurate visual data that can then be shared with the rest of the platoon.

The Barzam was able to utilise all existing weaponry available to Federation mobile suits, including high-powered beam weapons thanks to the high-output generator inherited from the Marasai. However, Barzam units were fitted with their own unique beam rifle that looked nothing like conventional Federation - or even Zeon - beam rifles. Mounted against the forearm and connected to the generator via a cable linked to the shoulder, the Barzam's beam rifle was short and easy to handle, and had the ability to fire regular-powered shots in rapid succession as well as a more powerful charged shot, although this rendered the weapon useless for a period of time. After analysing combat data recorded through initial sorties by first-issue Barzam units, Titans engineers integrated a three-tube anti-ship missile launcher to the Barzam's beam rifle, giving it an answer to enemy capital ships against which the beam rifle proved inadequate. Although the Barzam was equipped with two beam sabers stored in its forearm recharge racks, certain Barzam pilots (particularly ex-Zeon veterans) preferred to carry a prototype battleaxe into battle, using it to strike fear into enemy mobile suit pilots and rend metal from frame. The battleaxes also proved to be adept in disabling capital ship bridges, although the weapon could only be used this way only a few times before it had to be discarded.

The Barzam, with its unique look and special armament, tore into the Titans' enemies like frenzied mechanical gorillas. 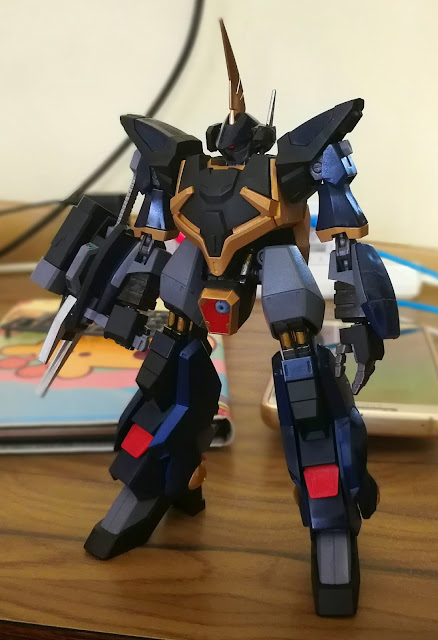 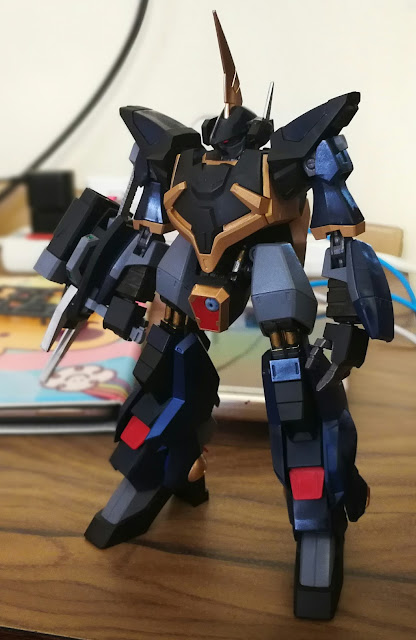 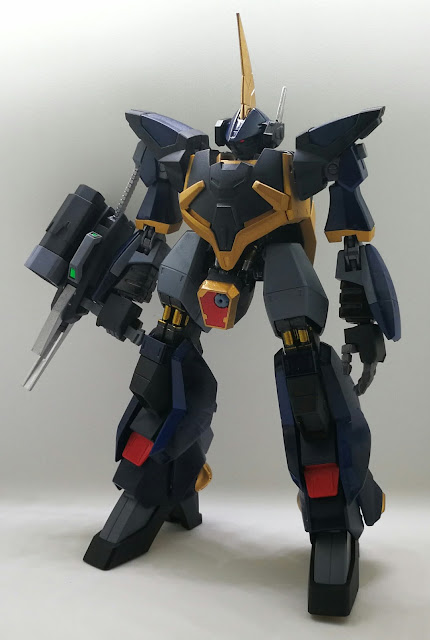 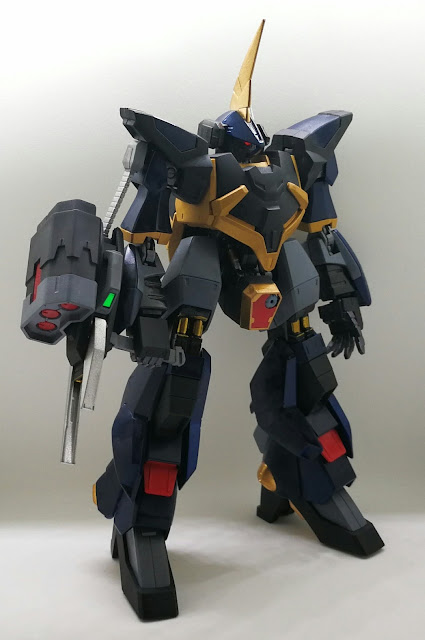 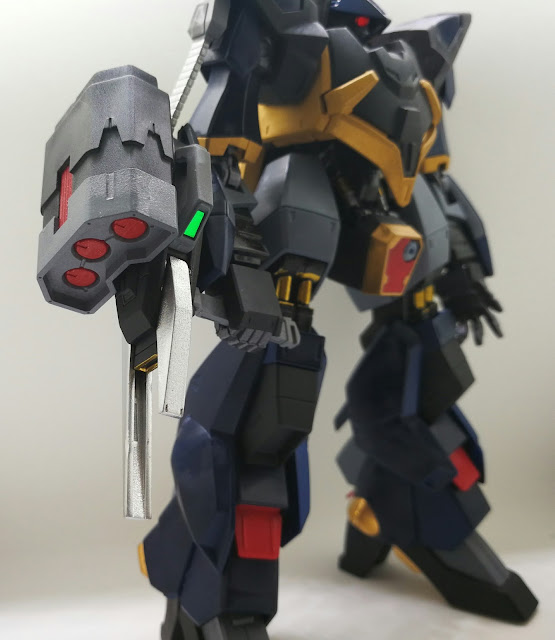 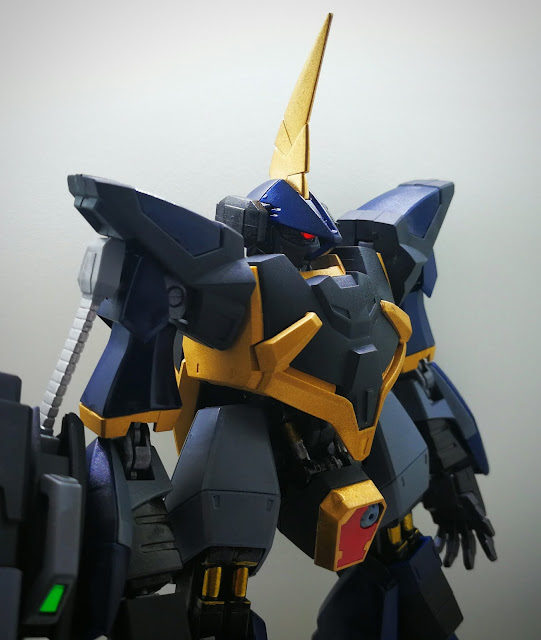 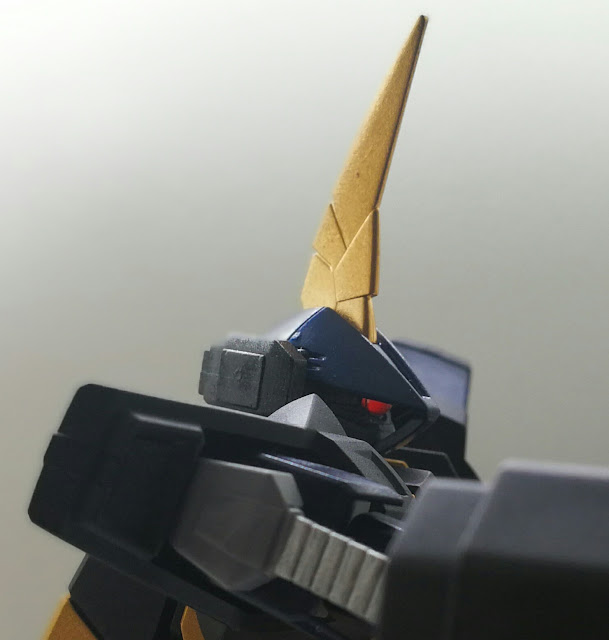 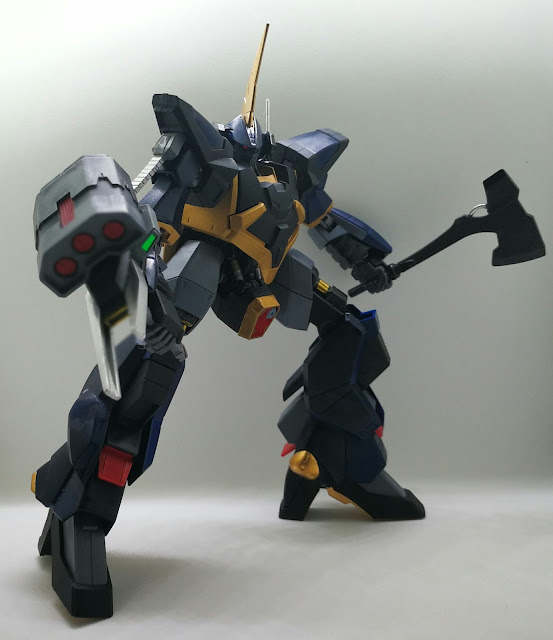 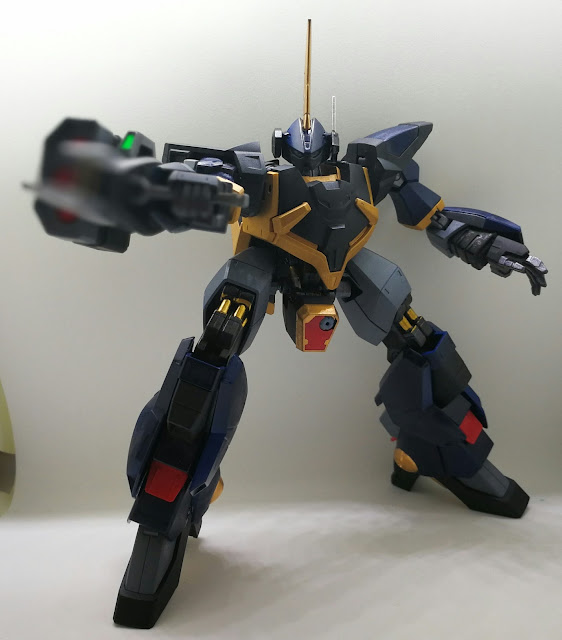 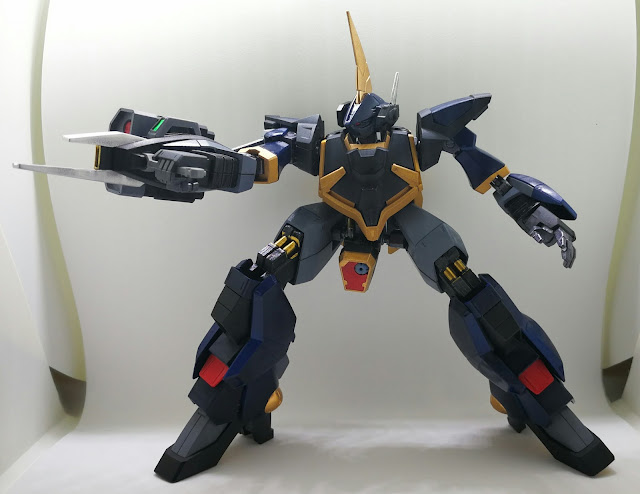 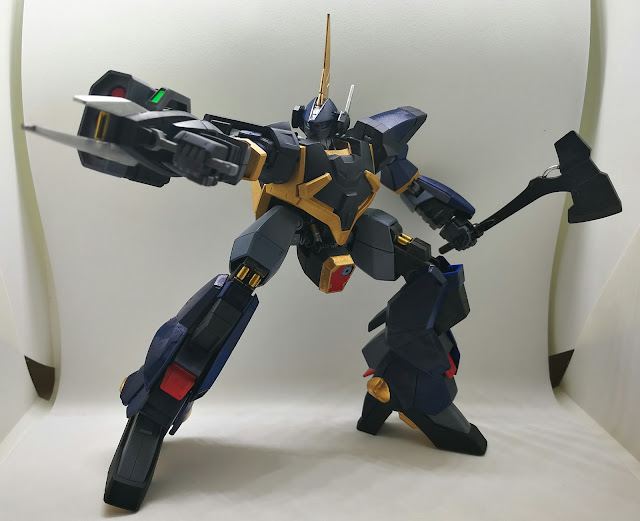 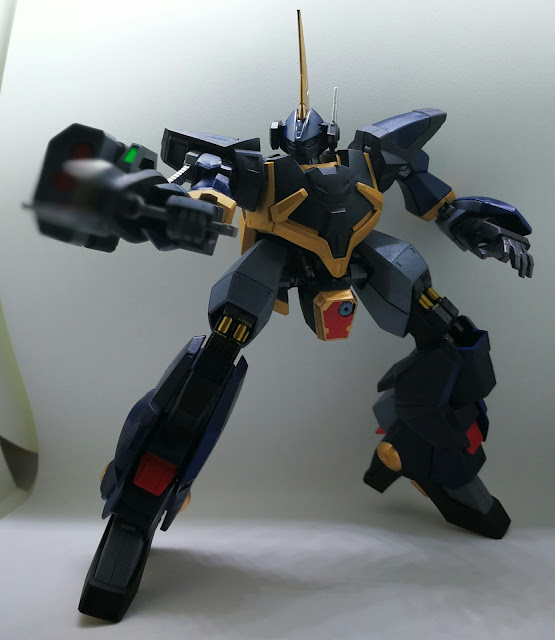 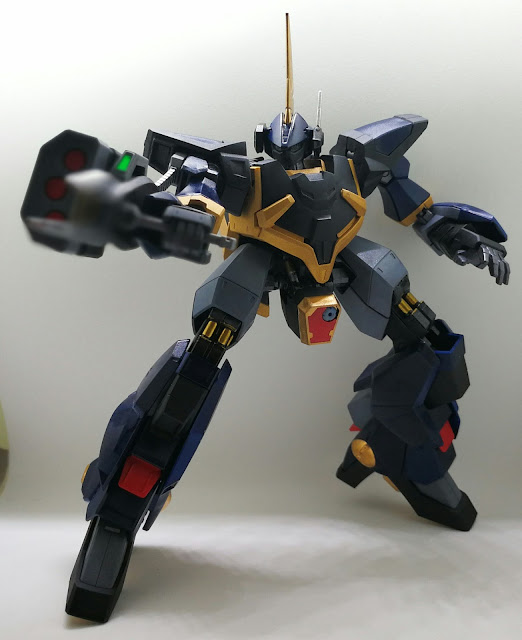 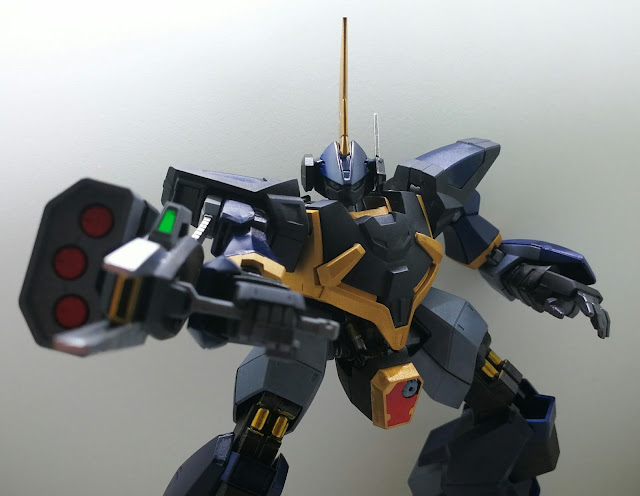 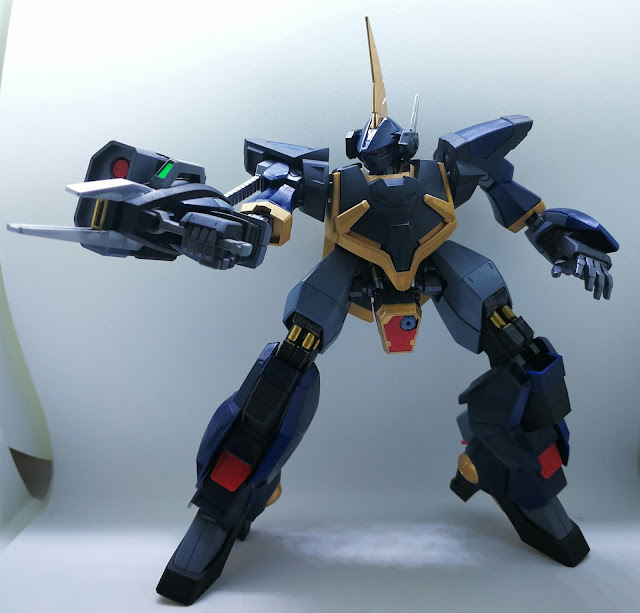 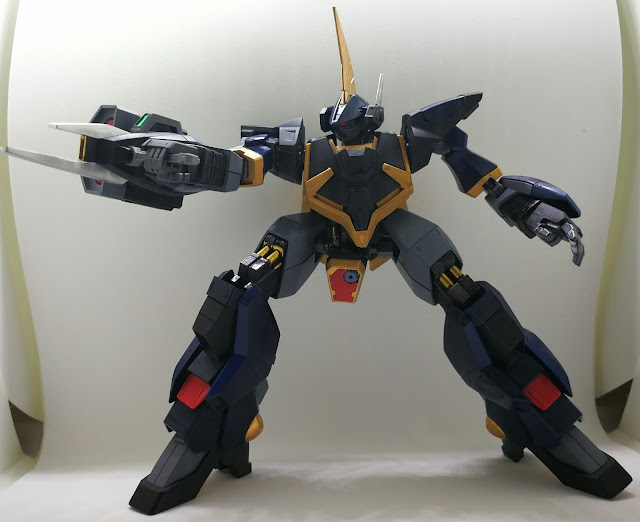 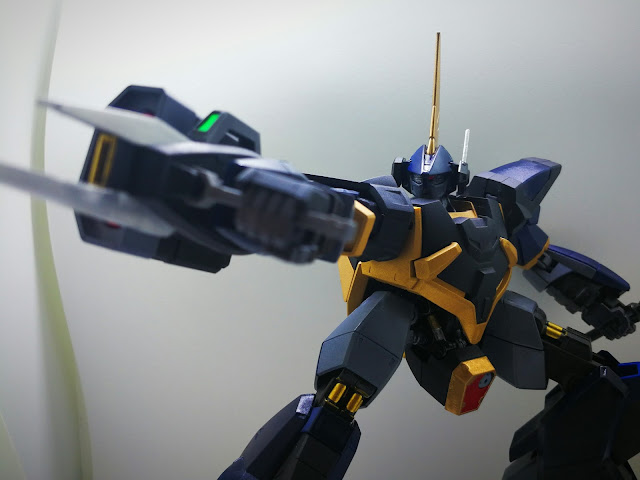 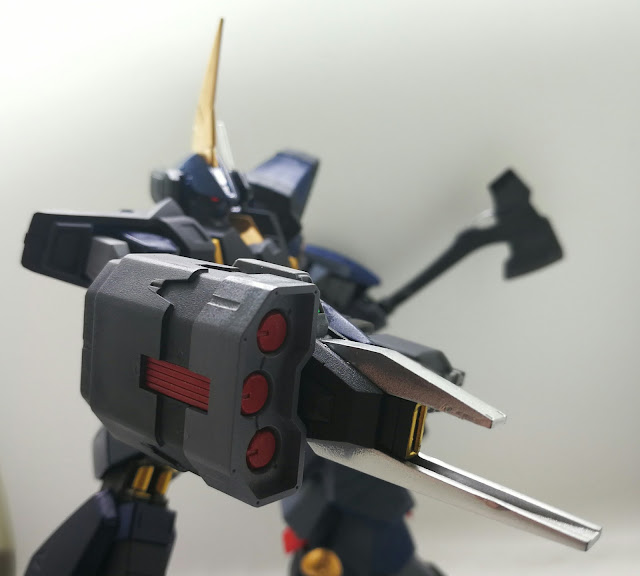 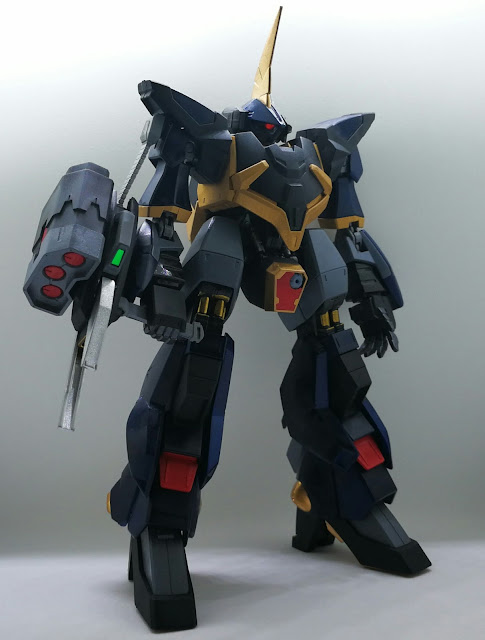 Posted by Gunplanerd at 7:15 AM