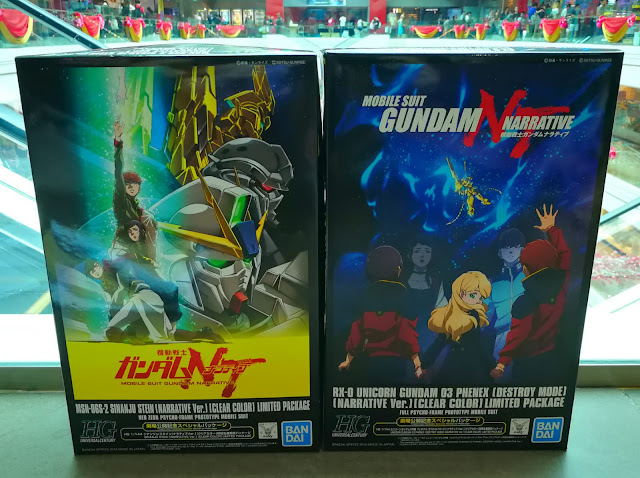 "This life is not all there is."

There will be spoilers after the jump, so look away now if you haven't caught the film!

In case you haven't watched the film and have read till here, INTENSE SPOILERS AHEAD. You have been warned.


The whole film revolves around the trio of Miracle Children, although the film tells you early that Rita is really the only one who is special (read: Newtype). The bulk of the main characters' development center around Rita, with their motivations all stemming from this green-eyed, blonde-haired girl who wants to become a bird - of all things - when she's reborn.


A key plot device of the movie is actually printed in plain sight on the box of the limited package Clear Color Phenex - Rita has no reflection while her companions have, meaning she was dead this whole time. In the climax of the film, the Phenex opens its cockpit to receive Jona, and the inside was as sterile as a hospital's operating theater. After going berserk (red eyes) and destroying her mothership during testing procedures, Rita presumably wandered the cosmos in the Phenex and continued her evolution into a true Newtype, eventually "dying" and transferring her consciousness into the Phenex's psychoframe, essentially being reborn into the Phenex (her lifeless corpse was probably ejected into space, save for the necklace piece). This explains the Phenex's movements during the Schezar Team's encounter with it in the Side 3 Shoal Zone, being graceful yet swift, zipping around the debris zone and evading the Jestas weaponry at inhuman velocities.

Let's talk a little about the Narrative Ver. of the Phenex. Based on previous lore, the Banshee and Phenex were both assigned to the Shallot and were investigating reports of Neo Zeon performance tests when the Rebawoo appeared. Long story short, a psychoframe resonance occurred between the Banshee and Rebawoo's psychoframes and caused the Phenex to go red-eye mad. The Phenex went berserk, damaged the Banshee and took out the bridge of its mothership the Shallot before absconding into the abyss of space. You can see this scene on the box art of the MG 1/100 Phenex model kit.


From a flashback sequence in Gundam NT, we see that Rita's Phenex indeed went nuts and used the Armed Armor DEs (with tails) as massive melee weapons to crush the bridge of the Shallot before disappearing into space, only to resurface two years later when Banagher Links put the Unicorn Gundam into overdrive. Rita's Phenex possessed none of the handheld weaponry used by the Unicorn series of mobile suits, instead using a technique that can only be termed as a Psycho-Wave.


Similar to the wave unleashed by the Unicorn Gundam at the end of the Laplace Incident, the Psycho-Wave turned back the clock on any technology it hits, reversing the tech back to its initial forms. Mobile Suits themselves were unaffected cosmetically, but their reactors were rendered inert, essentially being reduced to their base components.


However, although Rita's Phenex is powerful, it seems like she still needed Jona to ride her (pipe down, kids) in order to deal with the Second Neo Zeong, which was her ultimate endgame right from the very beginning.

One thing that really stood out was the fact that Rita was able to see so far into the future, with the calamity she was referring to being the Helium-3 disaster perpetuated by Zoltan in the Second Neo Zeong. Not Operation British, not the One Year War, not the Gryps Conflict, not Char's Rebellion and definitely not the Laplace Incident. This also means that everything that happened up to this point was going according to Rita's plan, with even the smallest variation capable of derailing her intended version of the Universal Century.

Perhaps, this isn't the first time Rita is living this life.


The film veers into this extra-human, interdimensional territory towards the end, with the psychoframe being touted as the series' Macguffin and taken to the extreme. From an alloy that embody a person's will, the psychoframe is now a super-material that can be used to talk to dead people and even overcome death itself. In short, the psychoframe is a material with which humanity can play god.

At the film's climax, we find out that Michele, the cold and calculating one out of the three, was privy to Rita's plans all this while, and was in fact, an active accessory. All her motivations and actions right from the time of the Titans to UC 0097 was to condition Jona to eventually take control of the Phenex while being connected to the other two Miracle Children (in Newtype space) to utterly annihilate the Second Neo Zeong through a series of lightspeed beam saber slashes. Poor Jona, being left out of the plan until the very end despite being the key element to the whole thing.


While we're on the topic of the Second Neo Zeong, the hot girl (Eric) from the Sleeves mentioned that the Second Neo Zeong was in fact a prototype for the one Full Frontal eventually piloted at the end of the Laplace Incident. Wrestled from Federation custody through the machinations of Minister Mohangan, the Second Neo Zeong was very much an early product, with a stock colour scheme, exposed panels and an unstable psycommu control system that didn't recognise its assigned machine and instead chose to accept the Narrative Gundam. Eric also mentioned that Full Frontal designed the Neo Zeong with technology that was not of this world, to which Minister Mohanagan resignedly responded that although they knew the Neo Zeong works, they don't know how it works. This right here, is basically space mumbo jumbo for "Newtype Science Bitches!".


Despite being in beta, the Second Neo Zeong was still a formidable machine, decimating Federation forces moving in to destroy it in order to prevent the disaster from the simulations to come to pass. Bearing ever weapon found on the original Neo Zeong, Zoltan made heavy use of the corrupting influence of the psychoframe to take control of enemy mobile suits, moving them like puppets. Rita and her Phenex also exhibited this ability, although she presumably entered the thoughts of the Jegan A1 pilots and told them to hit the unshielded areas of the Second Neo Zeong.


The ending of the film was basically Super Robot Wars, with the Phenex generating an impossibly big pair of wings (of light) that engulfed the Helium-3 canisters and removed the reaction that made them go critical. Note that I used the word "removed", as it is chemically impossible to stop an element from going critical at that late a stage. Again, Newtypes, bitches!


Banagher Links, in a custom black Silver Bullet that may or not be derived from the wreckage of Gael Chan's customised machine during the events of Unicorn Gundam, appeared when everything was going to shit in order to rescue Jona from his winged Core Fighter, and also helped deal some damage to the Second Neo Zeong with exactly one shot from the Beam Magnum, presumably the Unicorn's. It is interesting to note that Banagher's Silver Bullet had in place a mechanism to automatically replace its own firing arm after discharging the Beam Magnum, a trait of the weapon first seen during the Battle of Torrington Base where the Delta Plus messed up its own right arm while firing the Unicorn's Beam Magnum. Can't wait for the inevitable P-Bandai HGUC 1/144 model kit of Banagher's Silver Bullet!


In all, GundamNT was pretty good, building on the UC narrative to deliver a movie that's a lot of fun to watch. Flaws aside, UC fans owe it to themselves to catch this movie at least once.

Thank you Jona, Michele and Rita, for the amazing ride that is GundamNT.
Posted by Gunplanerd at 5:13 PM