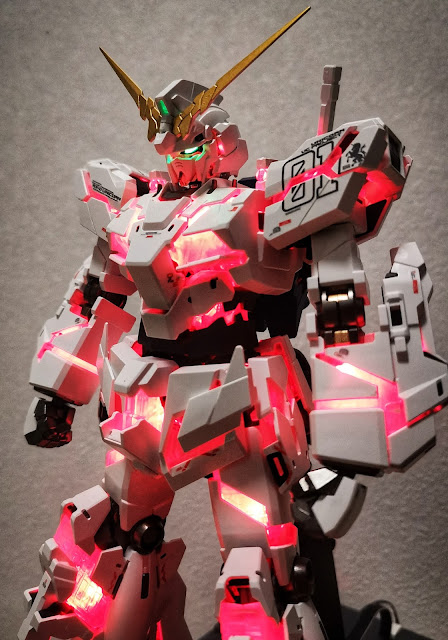 The Master Grade Extreme version of the Unicorn Gundam is the definitive Beast of Possibility.
The Bandai MGEX 1/100 Unicorn Gundam costs an arm and a good portion of a leg, but after fiddling with it for a while, I can start to see why. The build is very solid with no loose or shaky parts, everything holds together really well as though it was a more basic High Grade. Seriously, you can shake it like a ragdoll and NOTHING will fall out or pop off.

On the main body, you can clearly see the layers of armour, inner frame, Psychoframe and mechanical details accentuating the extremely satisfying exterior armour that have just the right amount of panel lining and other knick knacks. The included MS Cage serves to "frame" the Unicorn, giving it a proper stage to basically just stand tall and look effortlessly awesome. The gaps in the armour plating allow just the right amount of light to bleed through in Unicorn Mode, with the head camera's green giving off a somewhat eerie look and feel.

Of course, the star of the MGEX show is the LED gimmick, and boy does it deliver.
For a seemingly flimsy flexible LED strip, the diodes are really bright. The Psychoframe is extremely well lit when the Unicorn is in Destroy Mode, with light distribution that is quite evened out throughout the main body although some areas are distinctly brighter due to the LEDs' placement. A selling point of the MGEX is the ability to change the Psychoframe colours from red to green, and good thing this feature is provided as it is very difficult to choose between the two.

Also, transformation to Destroy Mode was a BREEZE, after coming from the Egyptian hieroglyphics that was the PG 1/60 Banshee. A simple turn of the component on the sides of the shoulders was enough to part the armour sections and expose the Psychoframe without risking part breakage or damage. I actually feel confident enough to transform the model kit back to Unicorn Mode!

The shields of the Unicorn finally have light after so many iterations of the Mobile Suit. Hell, even the Perfect Grade failed to channel light into the shield's Psychoframe. Using dedicated LEDs mounted in smaller mechanical action bases, each shield's Psychoframe is well lit, but only in Mode 3 of the lighting schedule (button pushed thrice). The only downside are the wires, which tend to get everywhere when displaying the shields with the Unicorn. Seriously, you'd get stopped at customs if you brought the MGEX up a plane.

The MGEX's LEDs actually pulse gently instead of projecting a static beam. The Psychoframe can be seen to "breathe" when going through its lighting cycles, ascending and descending its lumens. This actually gives quite a bit of variety to the LED experience, making it that bit more interesting to watch.
Staring at the LEDs can be quite hypnotic, thankfully the lighting cycle cuts off after a set period of time to conserve energy and your sanity.

One point to note: without good batteries for the MGEX (I used Energiser AAs), the LEDs will not light up properly. You will get instances where the shield lights don't stay on for long or the head camera just decides to turn itself off, like so:
This is likely because the large number of LEDs within the model kit require a substantial energy supply, something only good batteries can reliably provide. So don't scrimp on batteries for the MGEX and use the good ones.
Say what you want of the choice for the virgin kit of the Master Grade Extreme line, but the Unicorn Gundam is absolutely stunning in this format.
Gallery 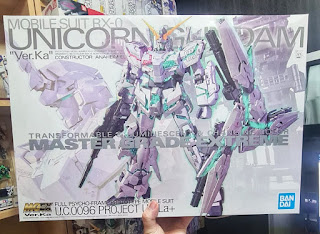 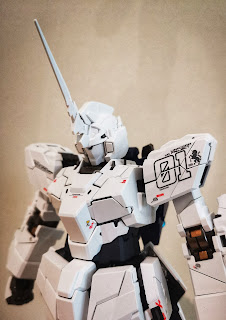 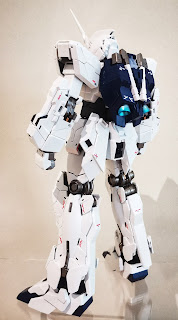 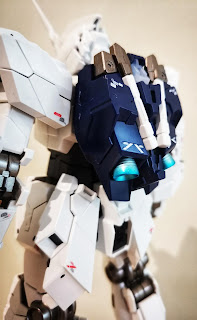 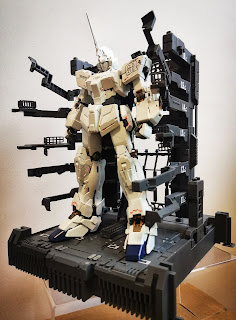 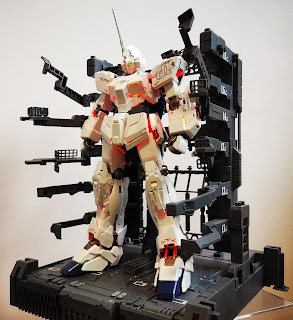 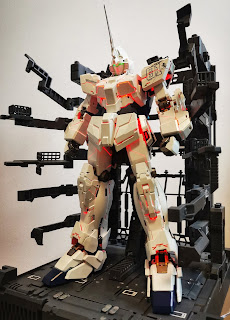 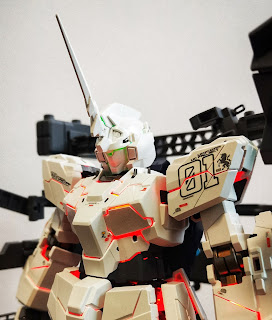 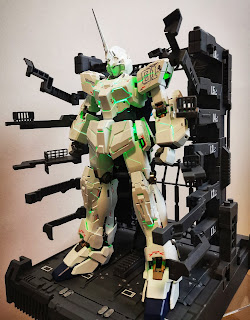 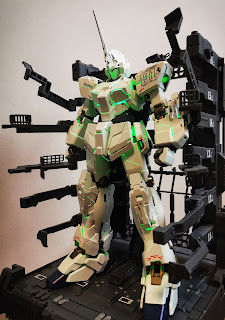 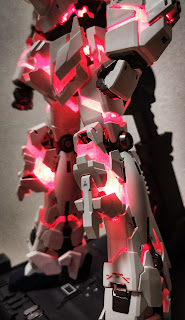 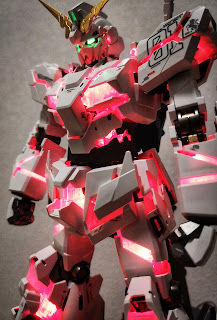 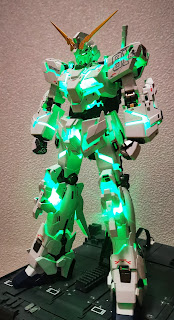 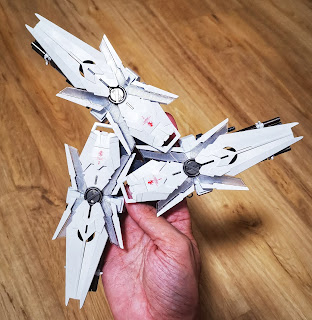 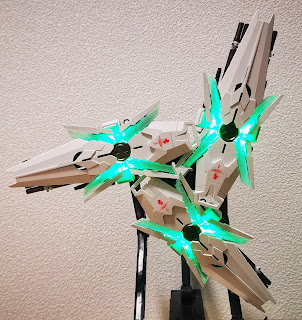 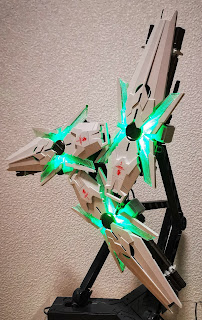 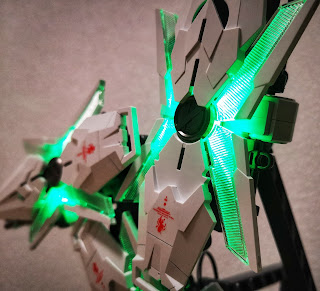 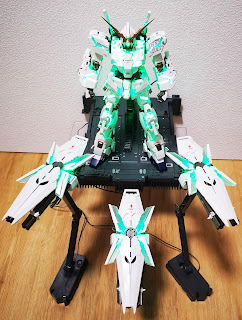 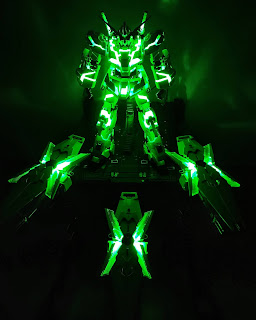 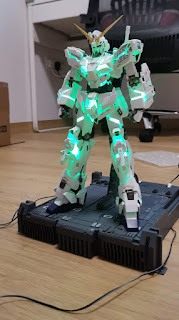 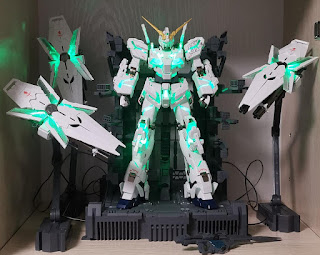 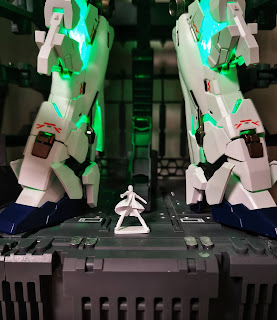 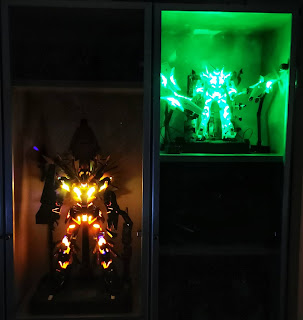