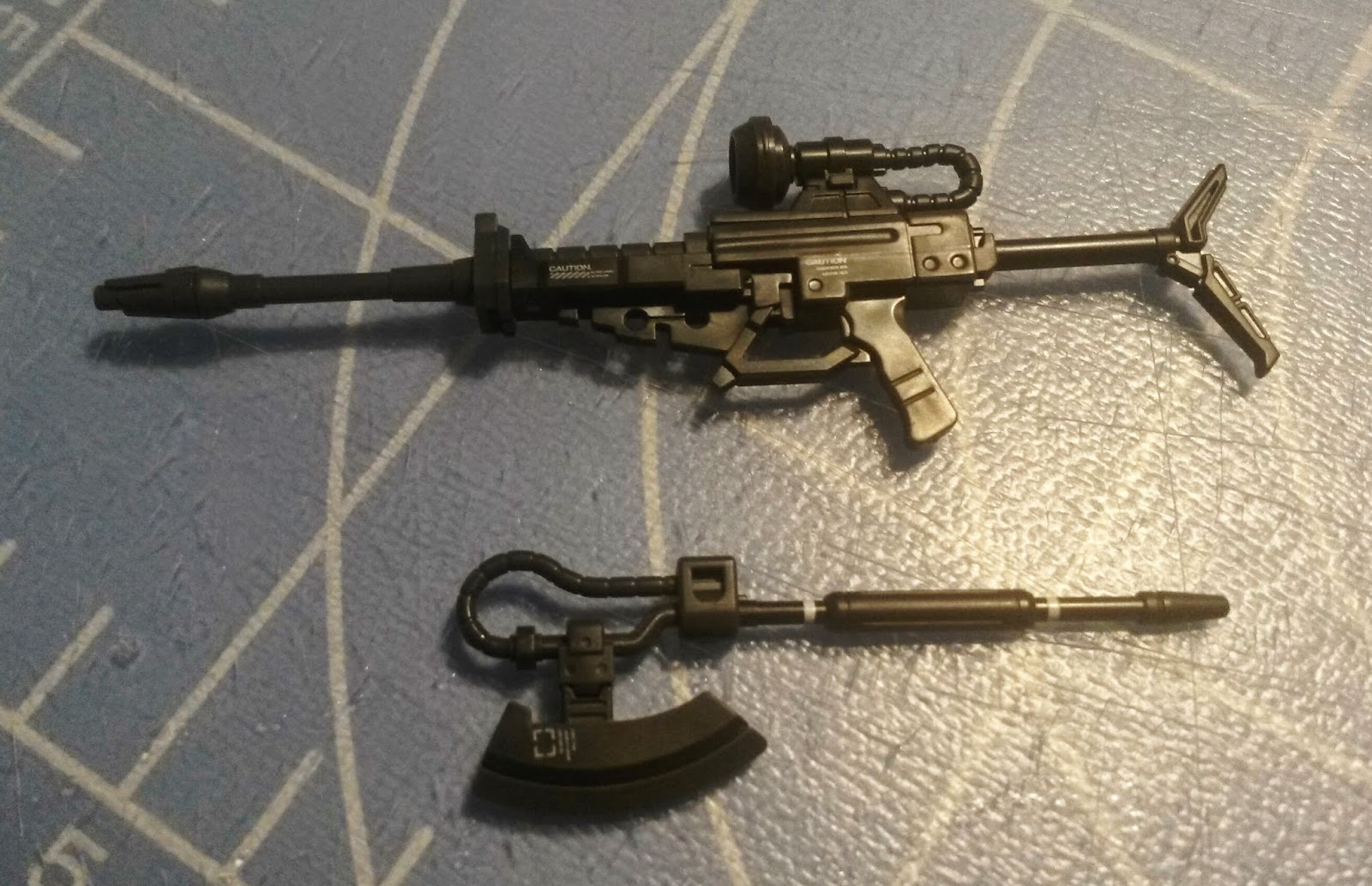 This little kit just came in the mail (sorta), and I had a little time to unbox it and play around with it. As you would expect of any parts from the System Weapon series, it is nifty, molded in the correct proportions and comes with the parts to create its different variants.

System Weapon 002 was actually released quite a while back, like in January 2012. A Zeon-oriented weapons pack like its more recent cousin Weapon System 006 (Rakten Bazooka and Spike Shield), 002 consists of the Zeon version of the game-changing beam rifle first seen on the Gelgoog, as well as the Heat Hawk, which is the definitive melee weapon of the Zaku series of mobile suits.

The only reason I got this System Weapon was because I chanced upon the image of its Beam Machine Gun variant during a random web surf, which is arguably the coolest iteration of the Zeon Beam Rifle. And I was not disappointed.

As for the Heat Hawk, it was more like a bonus, might-as-well thing, I didn't really have any interest in it until I saw the double-bladed mode that it could be in. 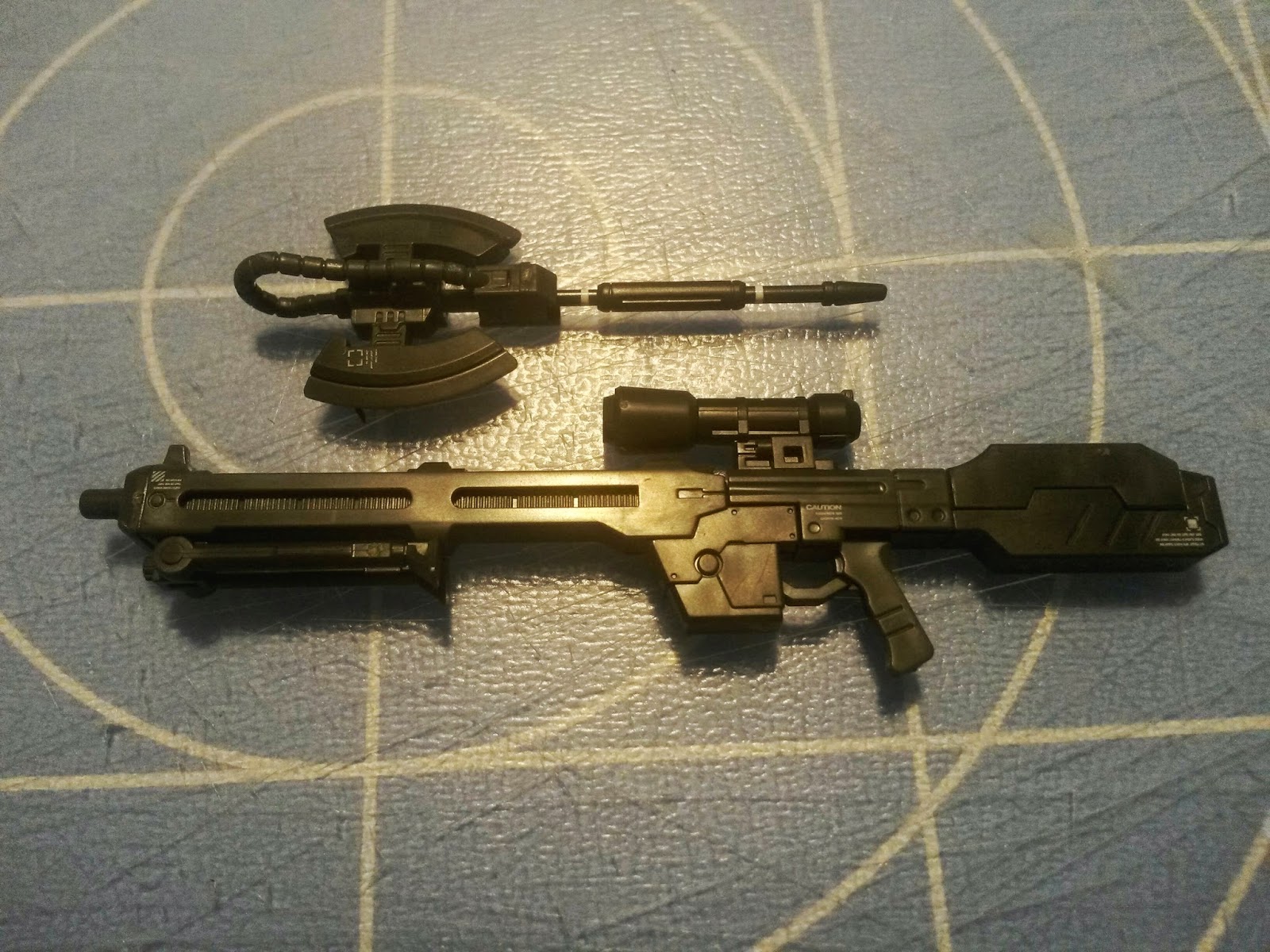 I will combine the Construction and Features section for this Analysis, since they are pretty self-explanatory.

For Construction, come on, it's a System Weapon, construction here is effortless, although you still need to pay attention to the edges and not cut away crucial connectors or pegs. From the image above, you can see that the weapon itself already has RG-style markings painted on, so you can just add on your own to populate the rather sparse weapon. In addition, you can paint in the sight lenses of the scope to give it a better look. A thin layer of topcoat would also go a long way.

Features-wise, the kit contains Federation-style blocky hands as well as the more roundish Zeon-style hands, both in the trigger and saber variants. It also comes with a display rack to mount the Beam Rifle and Heat Hawk, as well as any other 1/144 scale weapons you have. 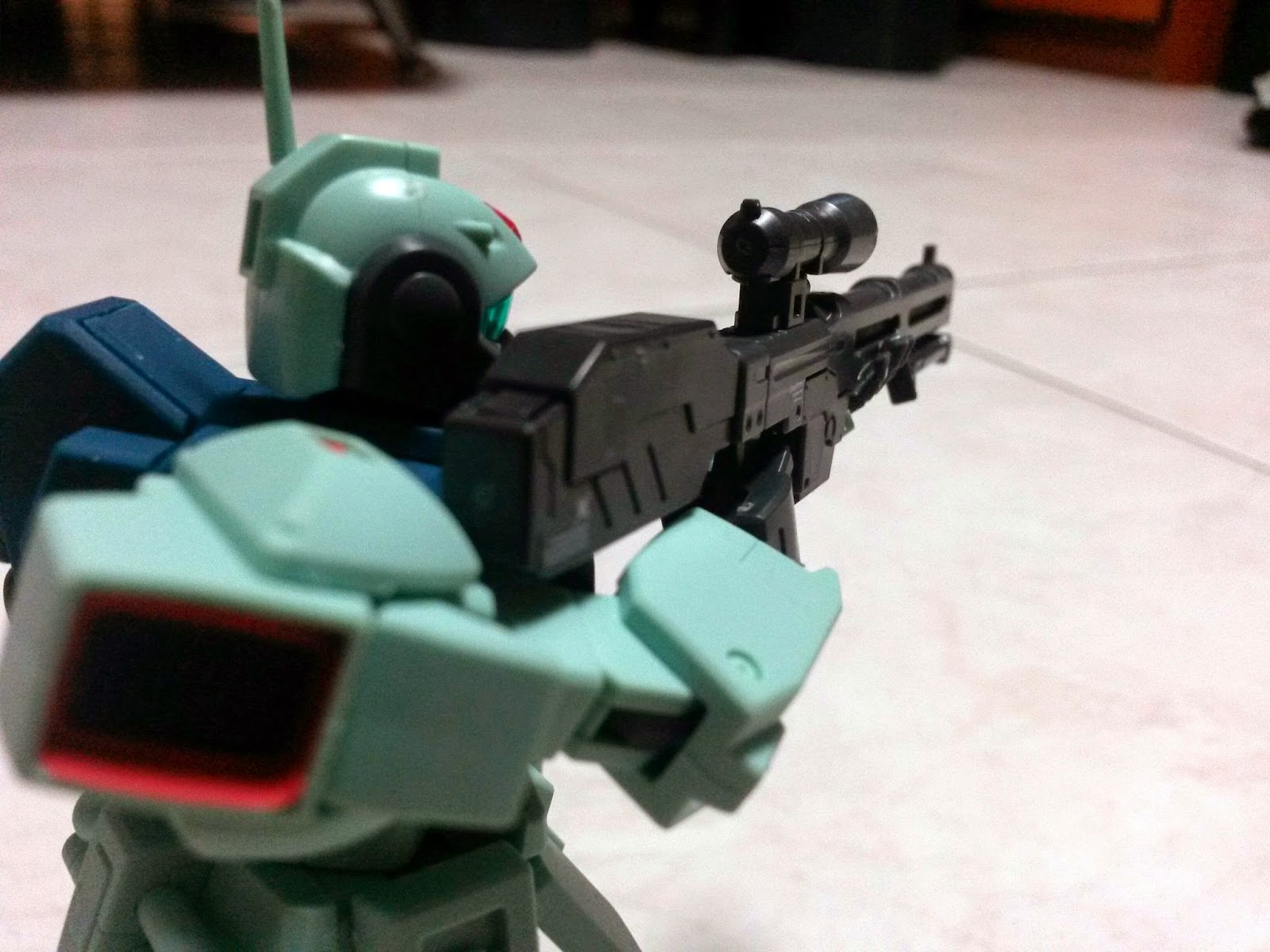 I have to say, the Beam Machine Gun looks absolutely kickass; that Nemo up there doesn't really do the weapon justice. It is long, thick, sturdy and looks mean enough to kick a GM's ass just by staring at it. 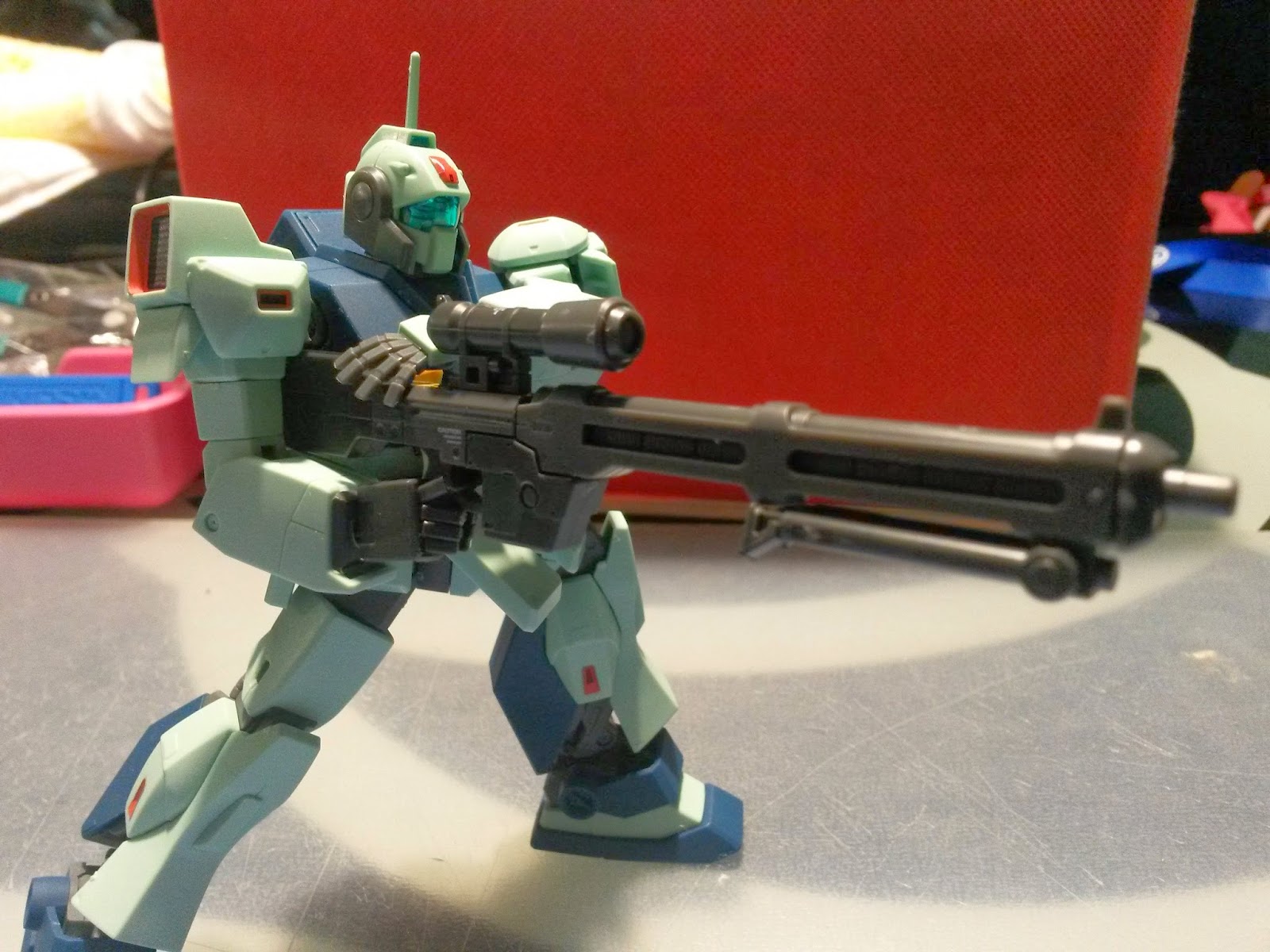 A better fit for the Beam Machine Gun would be either a Gundam-type kit or a mobile suit that is bulkier than the usual proportions, like say, a Gelgoog or a Rick Dom. Putting it on a GM-type suit is kinda pushing the envelope a bit, I guess Zeon likes their guns big and long (that's what she said). 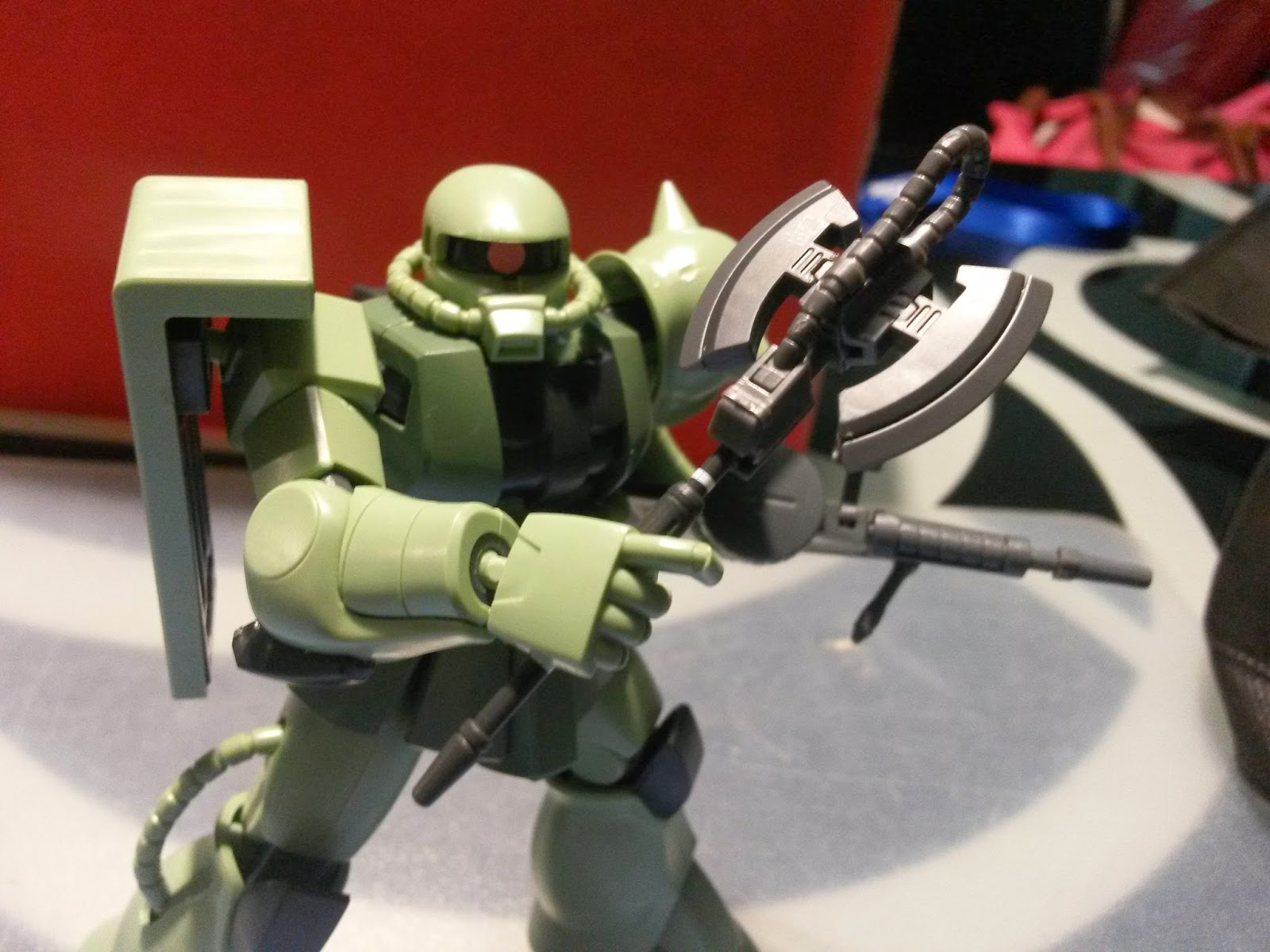 The spindly grip of the Heat Hawk fits surprisingly snugly in the large Zeon hands, and looks kinda cool, but only on Zeon kits.

So if you are looking for additional weapons to spruce up your kits, get a couple of System Weapons and arm your mobile suits to the teeth (metaphorically)!
Posted by Gunplanerd at 12:38 AM