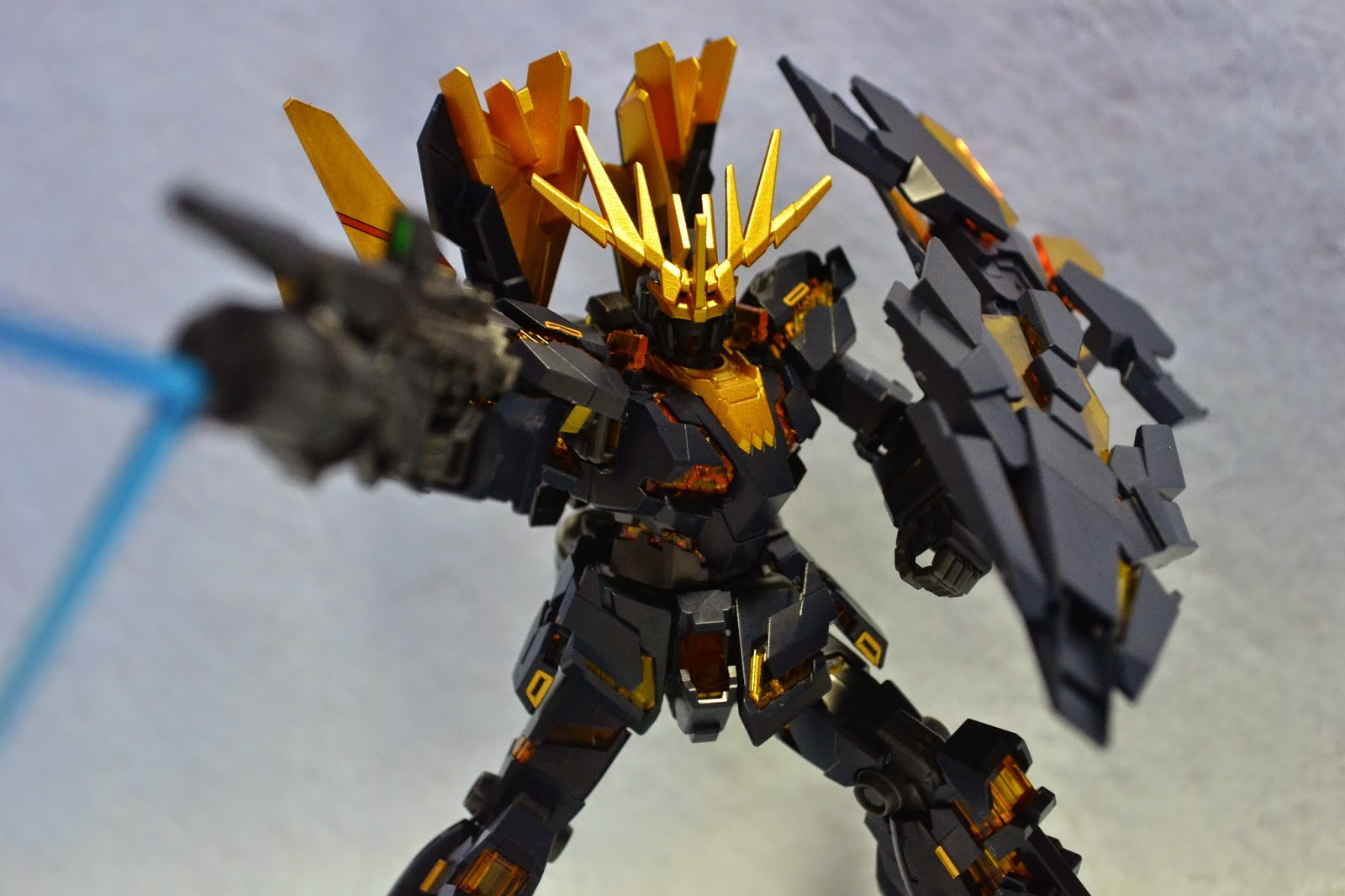 Out of the three Unicorn Gundam units that exist, the Banshee appeals the most to me. Perhaps it is the dark colour scheme, the gold-orange "psychoflame" or its ornate V-Fin, or maybe its just how badass it seemed in the OVA. The first Banshee onboard the General Revil during the events of One of Seventy Two was a little ho-hum: it didn't have much gold on its frame that made it stand out as well as a rather skeletal armament arrangement. The second iteration of the Banshee was better, sporting more golden parts, upgraded weaponry in the form of two Armed Armors as well as a pilot that can draw out its full potential, however forced it may be.

So the Banshee Norn is the ultimate culmination of this particular Unicorn Gundam, and it does live up to that perceived repute.
Overview The defining feature of any Unicorn kit is the psychoframe, a mobile suit scale brainwave-to-machine interface that the Unicorns are famed for. In Destroy Mode, armor panels all over the Unicorn separate to reveal the glowing psychoframe, and the activated Newtype-Destroyer System can go about its Newtype destroying business. Transposing that to the Gunpla world, psychoframes are portrayed as clear or different-coloured parts, revealed in between armor panels all over the kit. The older Banshee kits utilised orange-gold parts for the psychoframe, which served their purpose well but didn't really showcase the badass look of a Destroy Mode Banshee if compared with say any of the kits for the Unicorn Gundam. 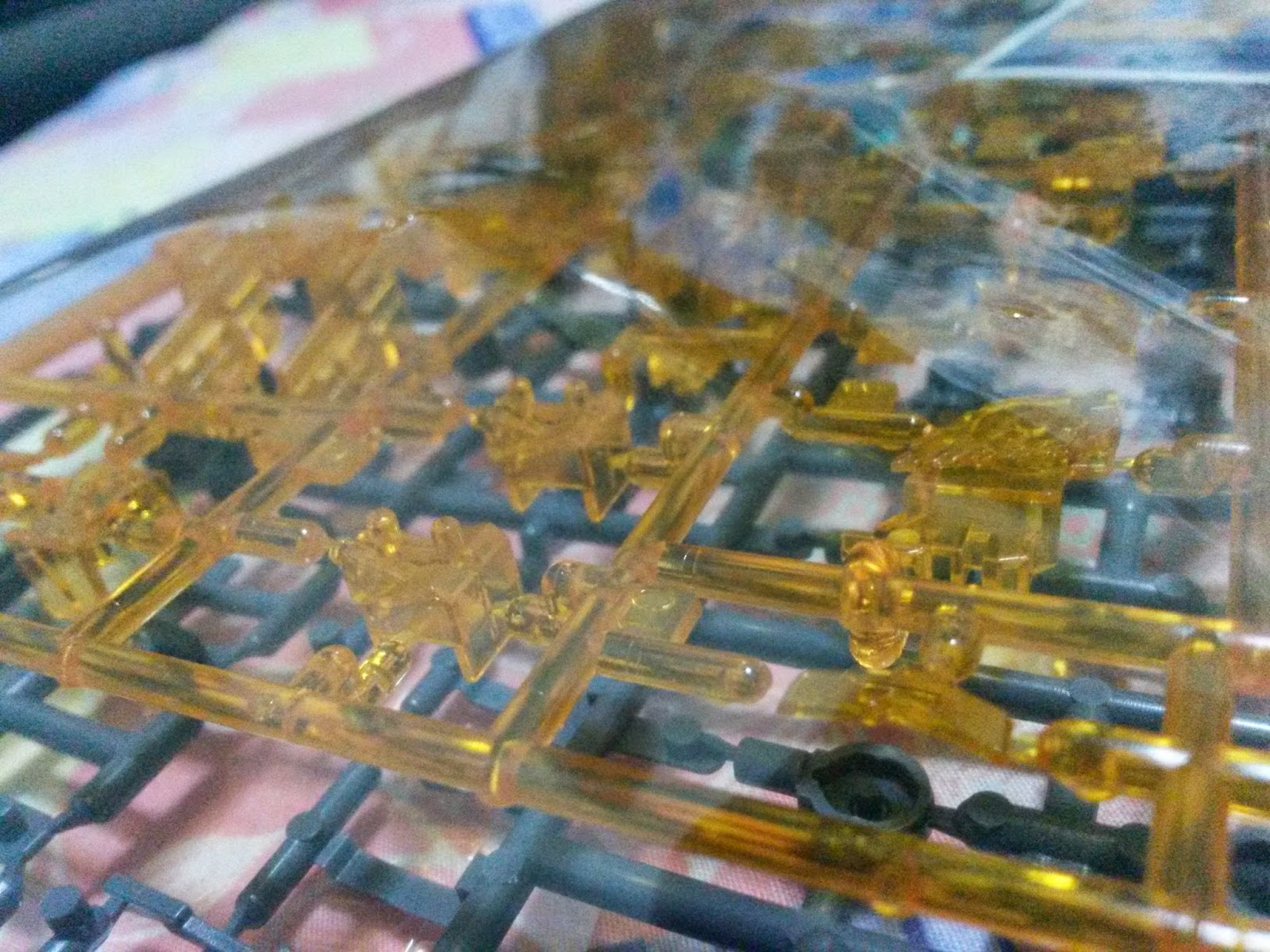 For the latest Banshee kit however, a full set of clear orange parts are provided for the psychoframe, which takes the "psychoflame" moniker to a whole new level. 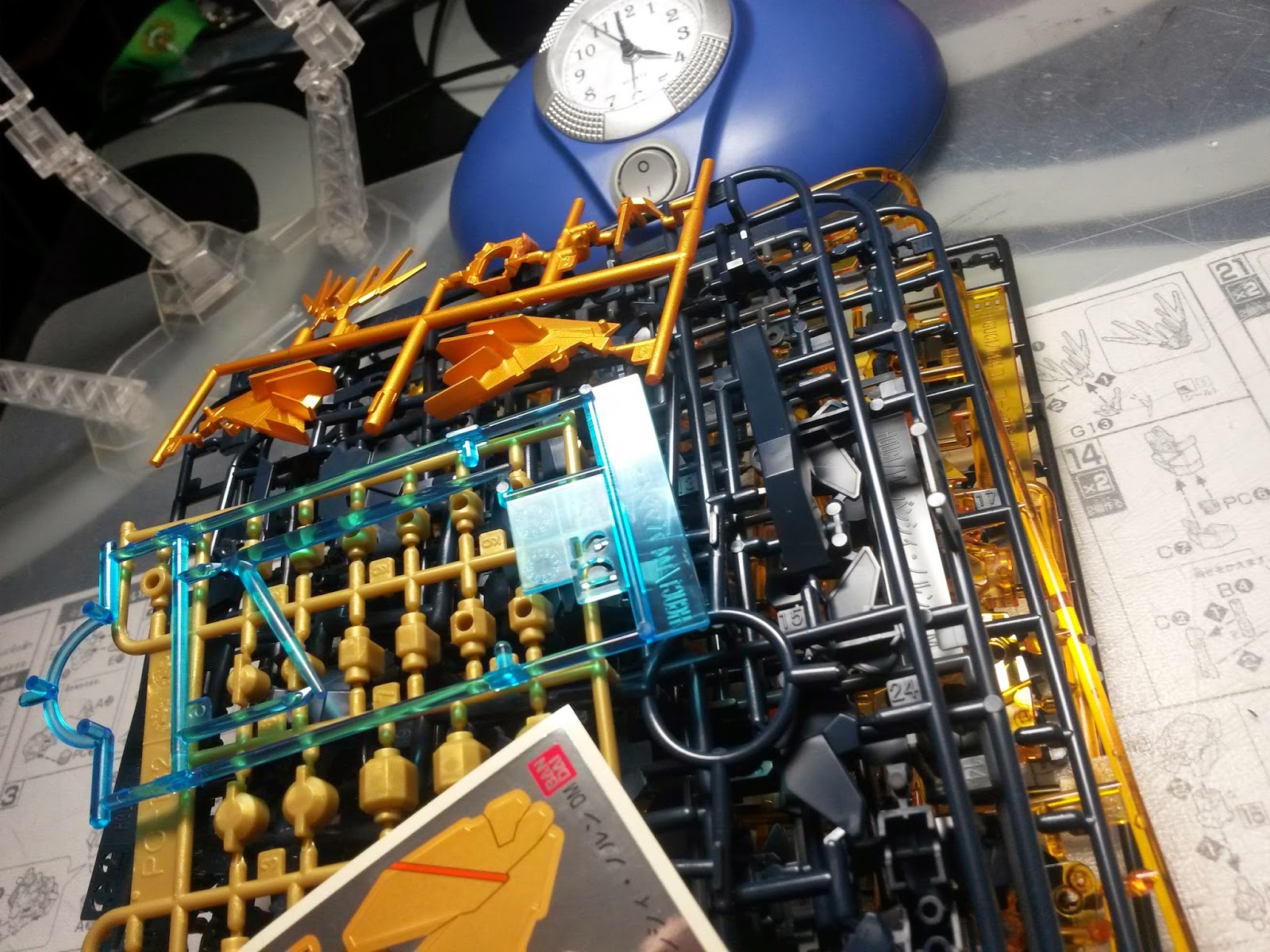 The Banshee Norn builds the same way as any other Unicorn Gundam kit, with the psychoframe parts going together with the regular parts to create the finished product. The gold this Banshee Norn came in is the unpleasant pee-gold colour that is found in most of Bandai's gold-coloured releases, and it doesn't really do the Banshee Norn any justice, especially with the Armed Armor XC in Destroy Mode. 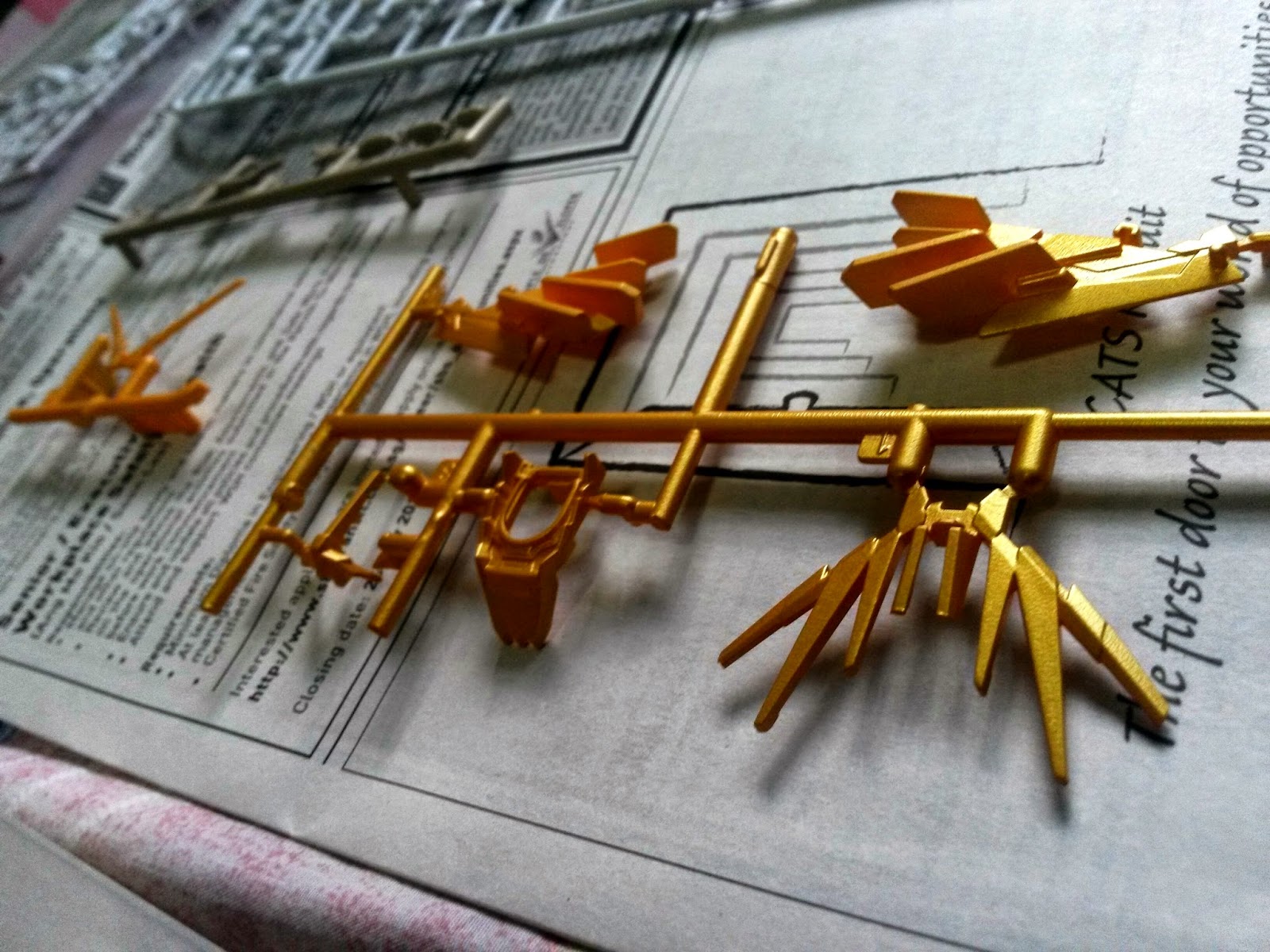 Prior to fitting, the entire runner molded in gold was given a more pleasing coat of gold (RJ London 22k Non-Leafing Gold), which served to enhance the overall look of the Banshee Norn. In the very least, it is more reflective than the stock colour. 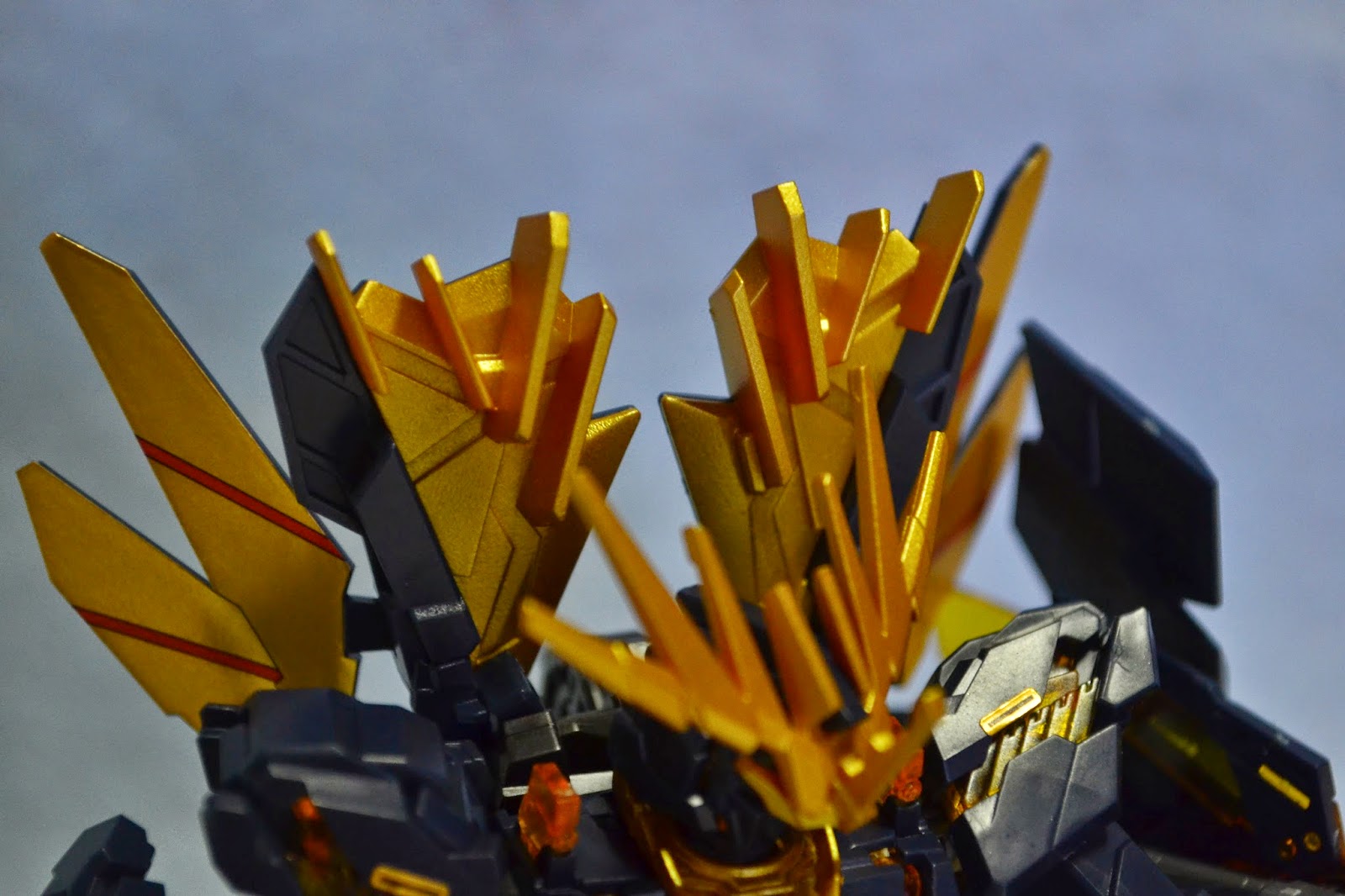 One point to note is that the gold on the wing-like protrusions by the sides of the Armed Armor XC is achieved with two big sheets of foil sticker, which is actually good since foil stickers are inherently reflective. 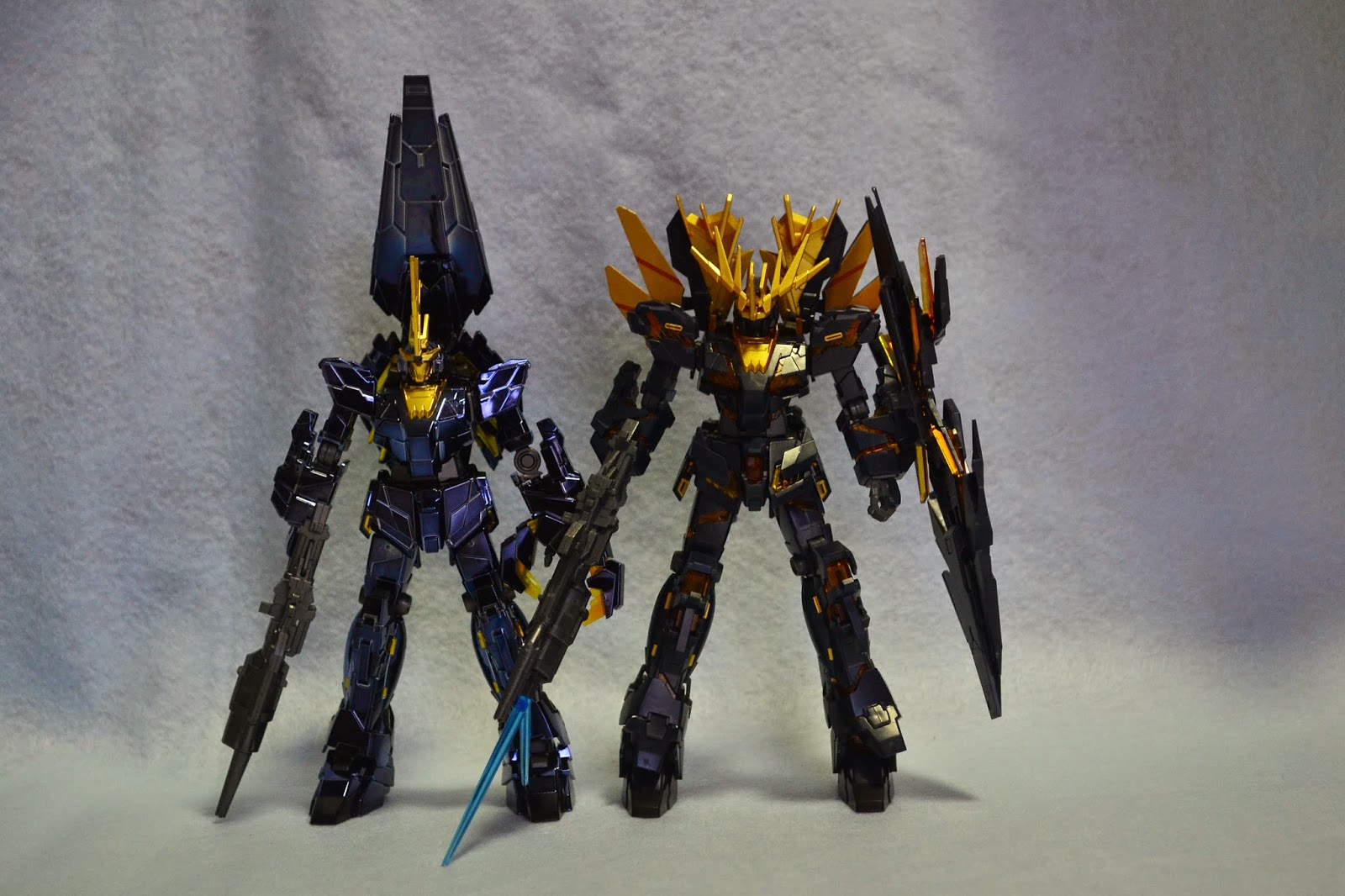 Another thing to take note of when building the Banshee Norn is that the V-Fin is made up of two separate golden pieces: the fin itself and the "horn". While the instructions make it seem like the two will fit together like two halves of a beam rifle, the reality is that the fin part just balances somewhat precariously on the horn and the entire contraption just enters the hole in the Banshee Norn's forehead. 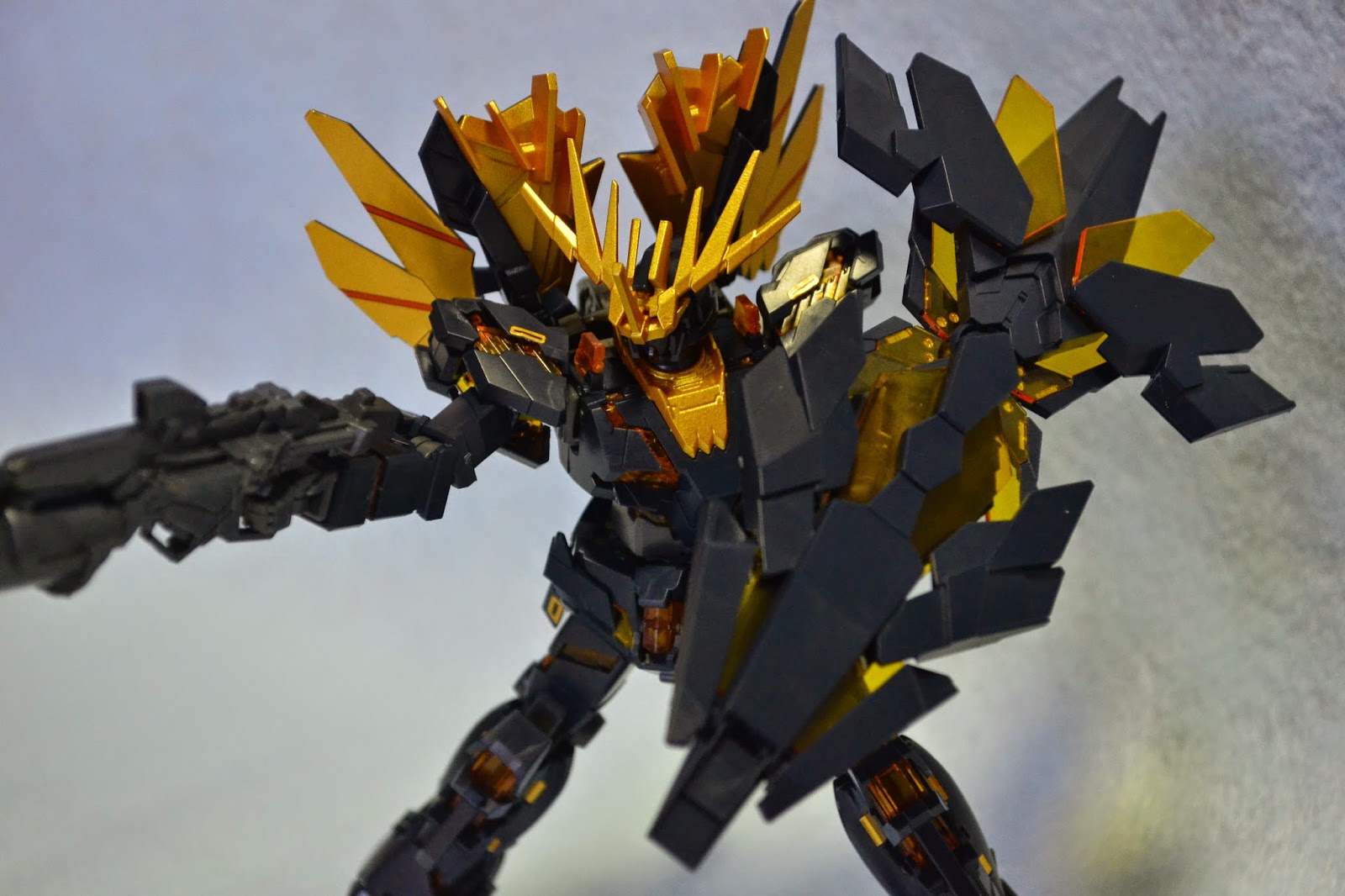 The clear orange psychoframe really makes a huge difference, blending very well with the midnight blue of the Banshee Norn's armor, giving it a flaming effect. It beats the older solid orange-gold psychoframe hands down, no contest, as the following picture will show. 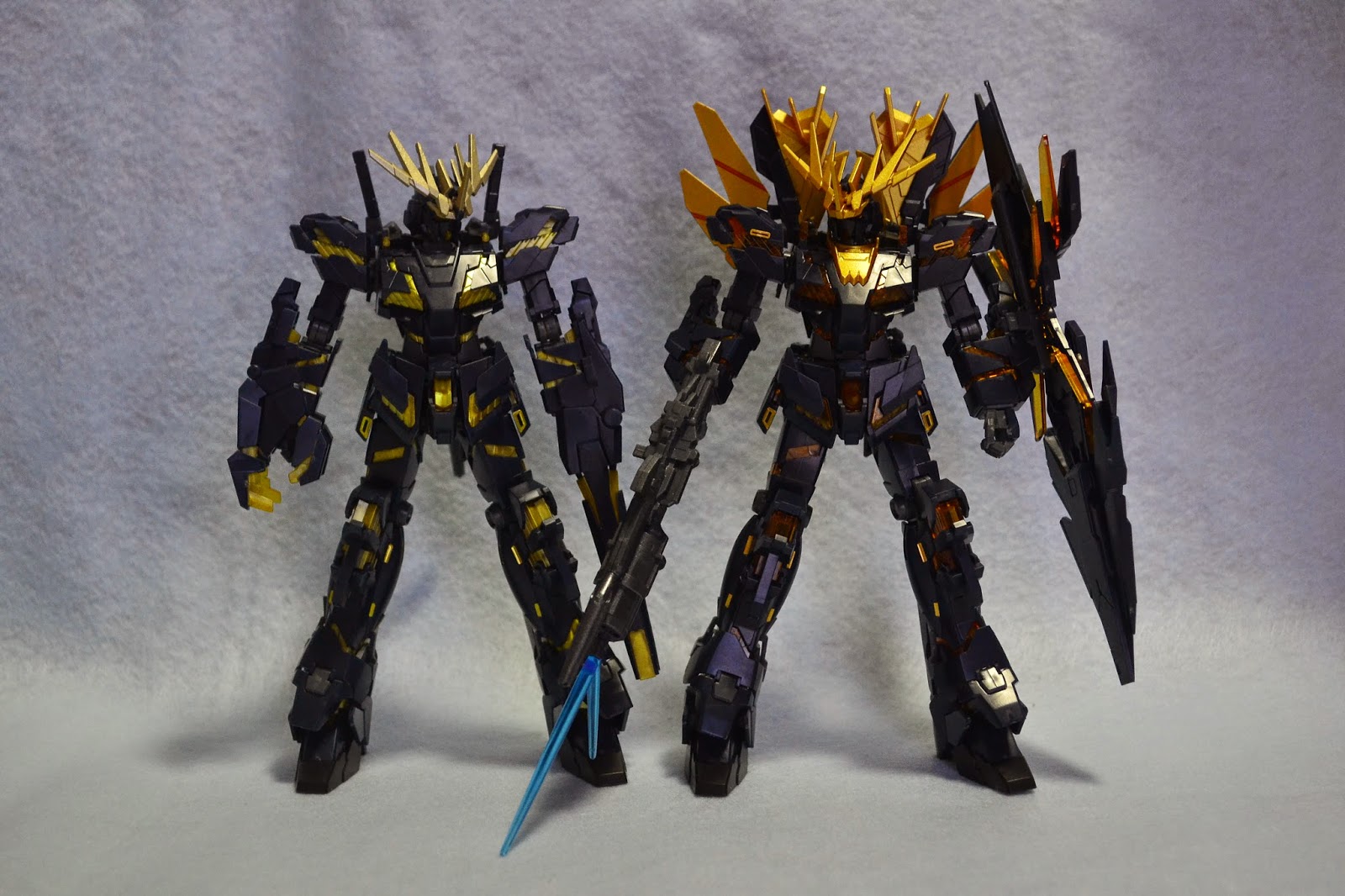 As far as details go, the Banshee Norn features the same level of detail as any other Unicorn kit, since they pretty much share the same parts. 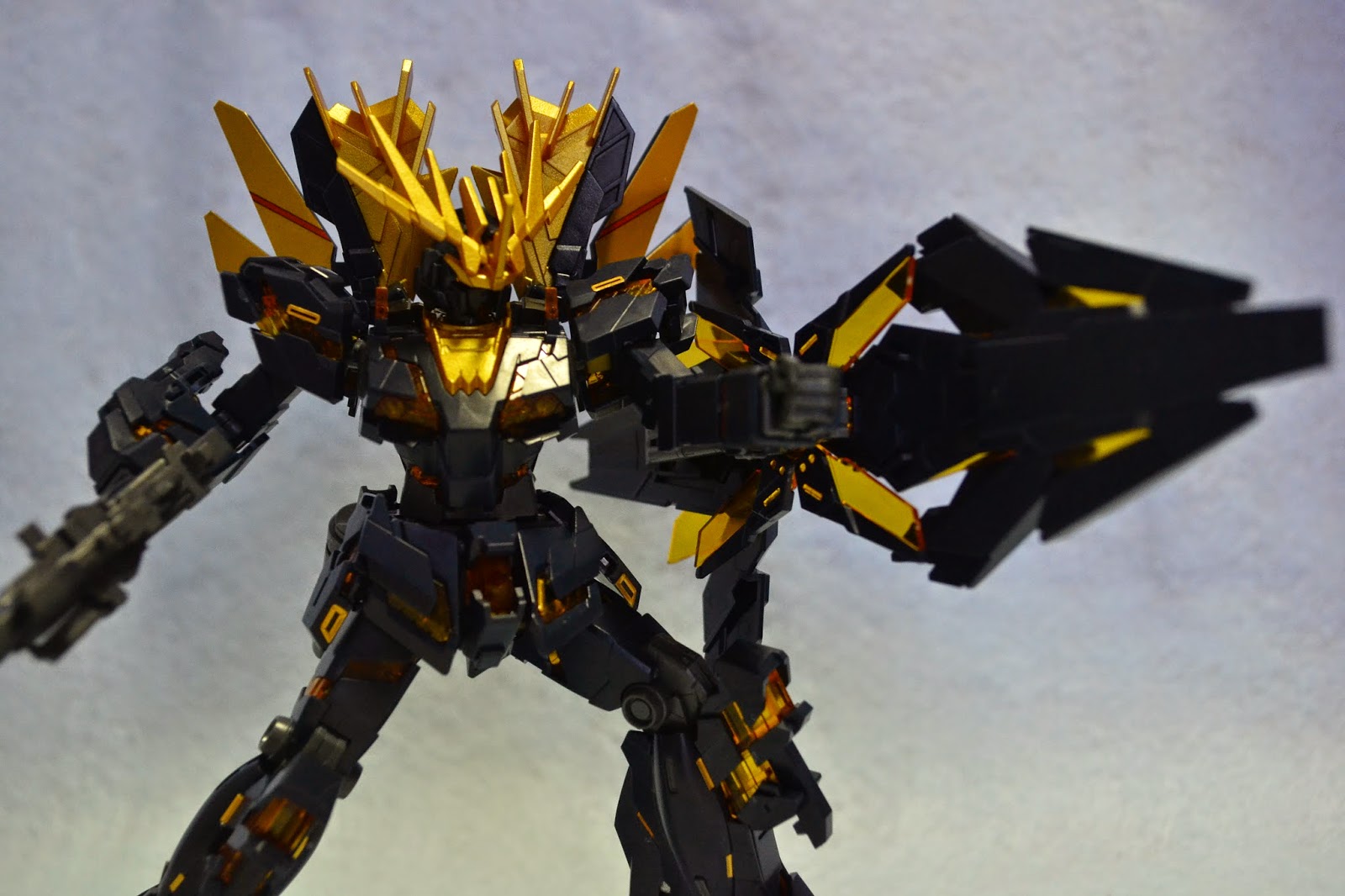 Similar to its Unicorn and Phenex brethren, the Banshee Norn is relatively articulated. However, the deployed Armed Armor XC may hinder or affect some poses, especially if you plan on working in the Armed Armor DE on the left arm. The size and exposed psychoframe parts of the DE may clash with the wing-like parts of the XC, but a little tweaking here and there should make things work. 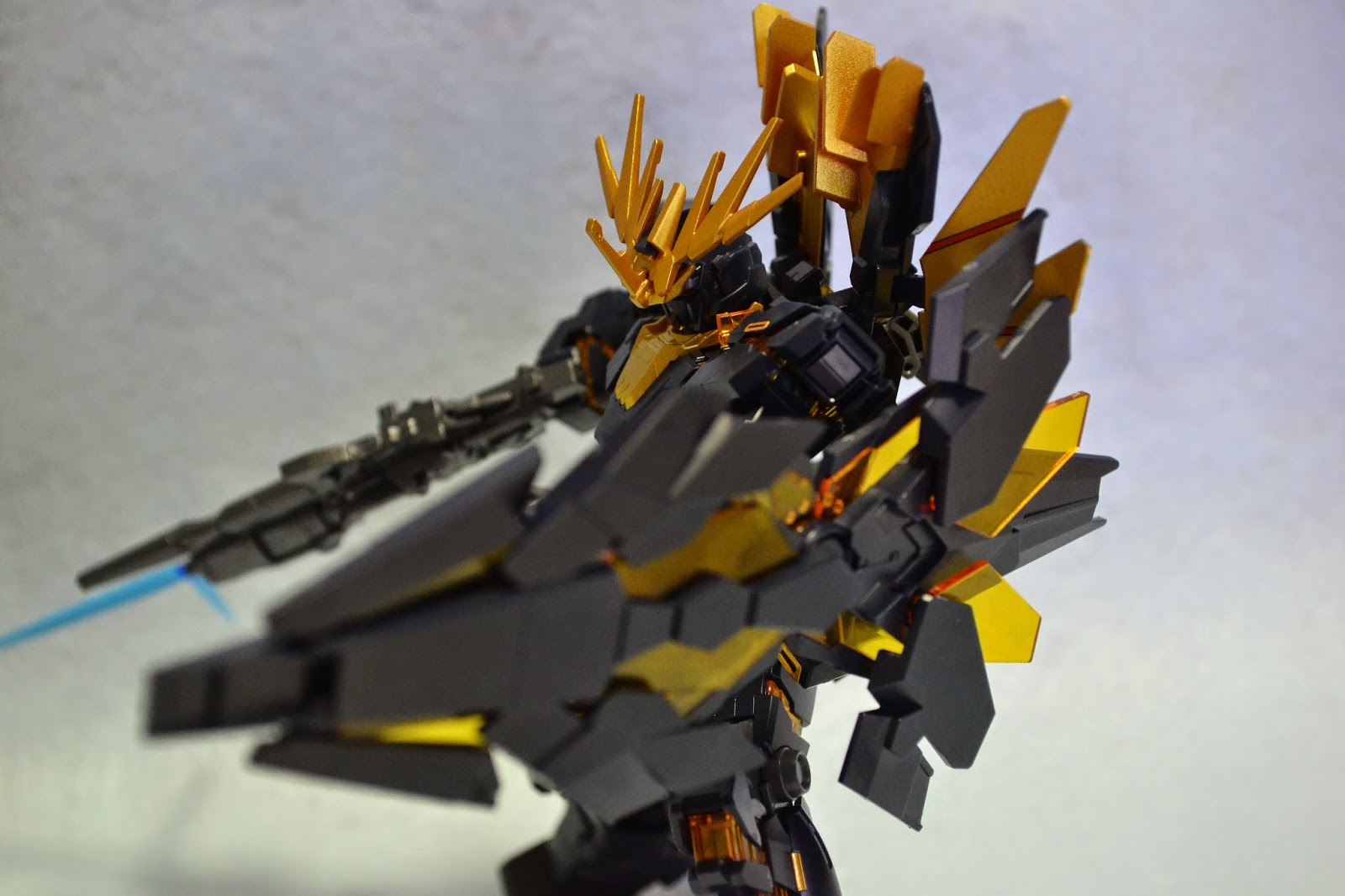 The Banshee Norn comes with two saber hands and one right-side trigger hand to hold the Multi-Launcher equipped Beam Magnum. An extra magazine for the Magnum as well as another Multi-Launcher is provided, although you can't do anything with them except to peg them to the rear skirt armor. Four beam saber hilts are provided, but not a single blade is given, you'll have to borrow some from other HGUC kits. The regular Unicorn Shield in Destroy Mode can also be made with the leftover parts, with a clear-orange psychoframe 'X'. 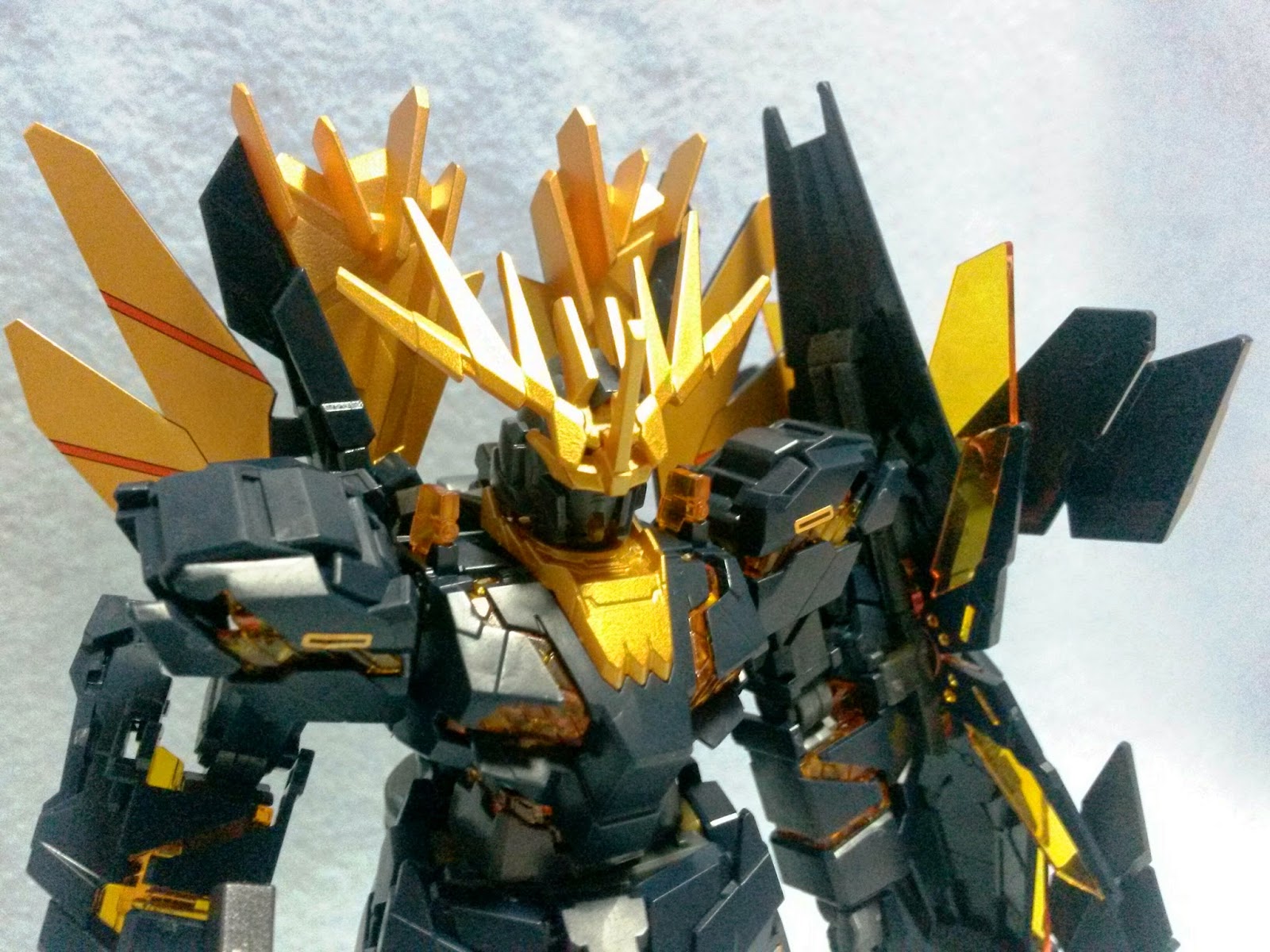 The Beam Magnum, like the other Unicorn kits, can be holstered in the middle of the backpack. Similarly, the Armed Armor DE can also be placed there with the addition of a connecting part. The connector for the dual Armed Armor DEs of the Phenex is also given, so you can create your own Banshee Phenex if you get a second Banshee Norn. 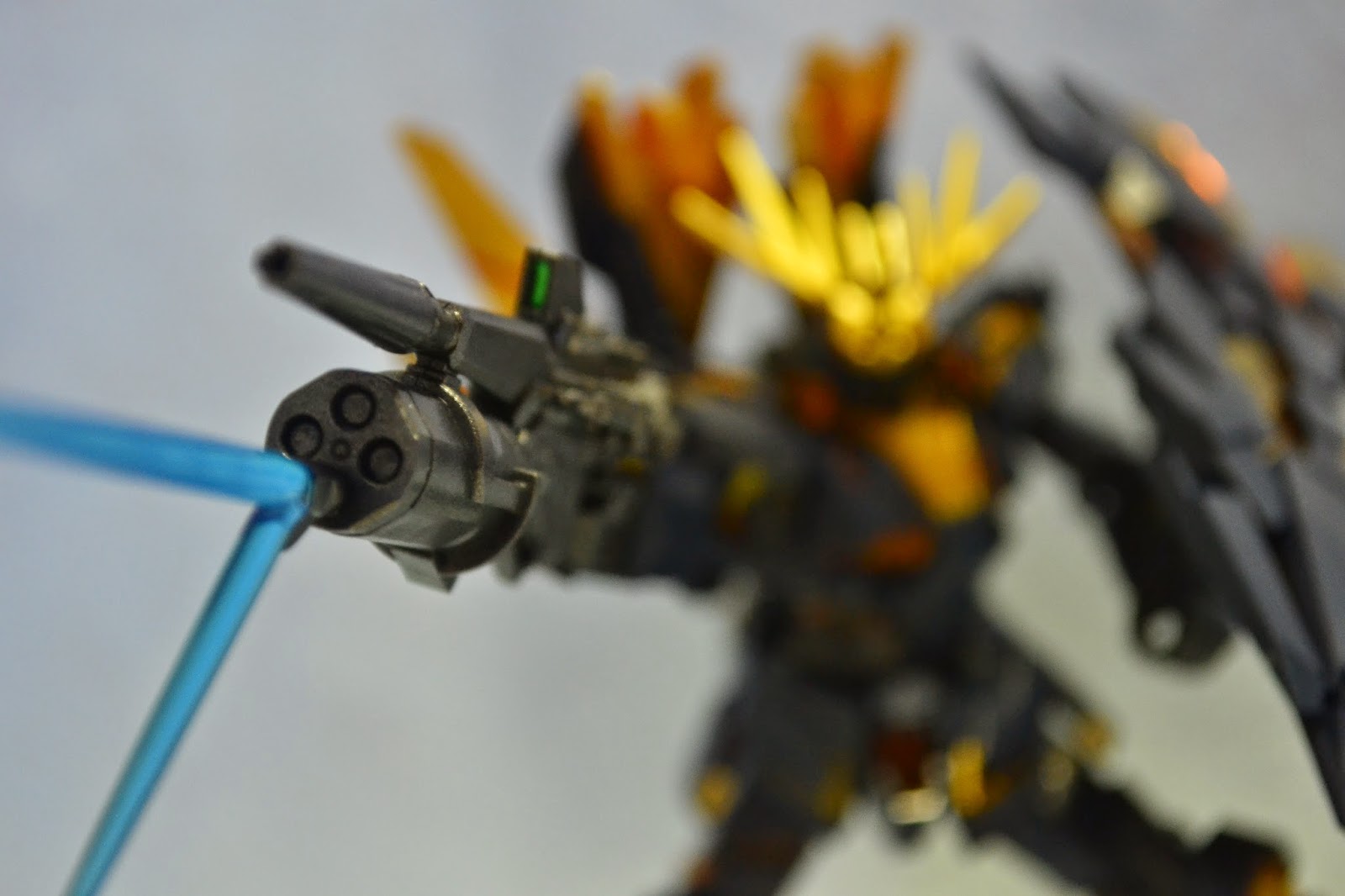 The Beam Jitte is a pretty nifty little thing, connecting to the Multi-Launcher with a third piece and looks absolutely bitchin'. The Jitte alone is definitely one of the highlights for this kit. 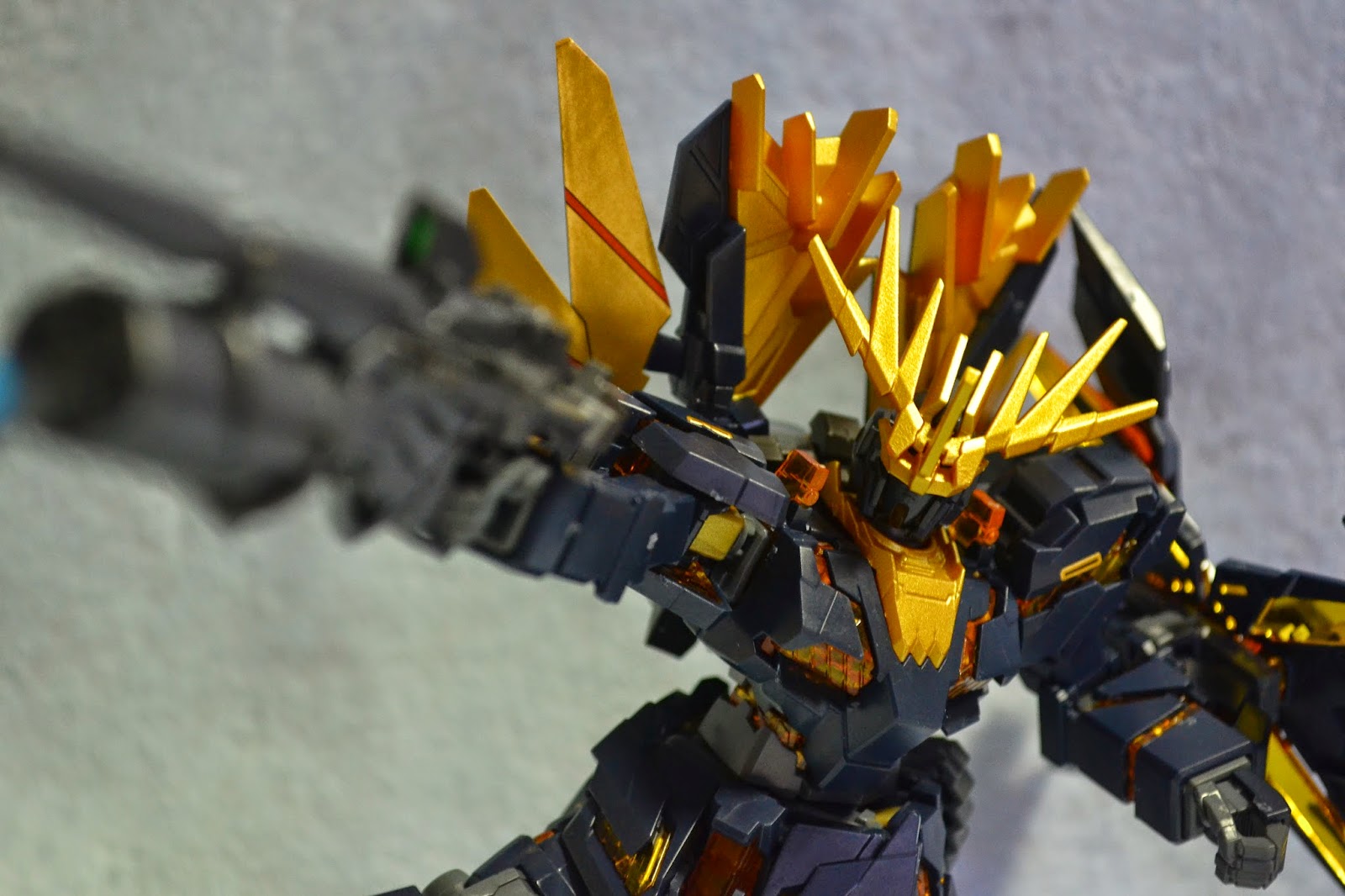 The latest Banshee Norn is a leg up over its predecessors, with excellent execution only slightly marred by the pee-gold that Bandai loves. Now I wonder how it will look like if the Banshee Norn has the full armor pack found on the Full Armor Unicorn Gundam.

Hmmm.
Posted by Gunplanerd at 7:48 AM