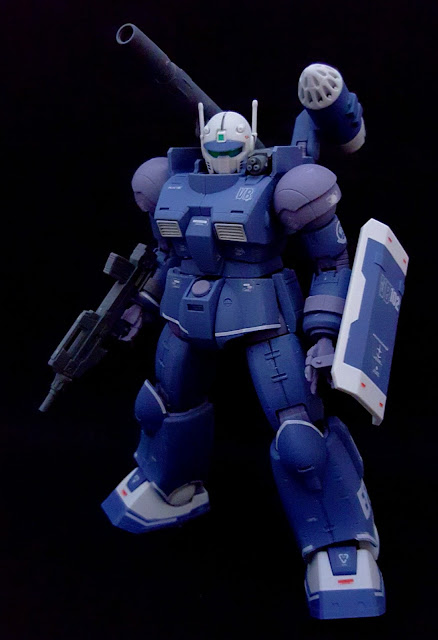 Okay first of all, let me qualify that yes, I know that the Guncannon First Type put up a dismal performance in Gundam The Origin IV: Eve of Destiny and yes, I know that the entire Iron Cavalry Squadron got wiped out by a force significantly smaller in terms of size and firepower. Nevertheless, I have a weak spot for expendable grunt mobile suits, the rank and file soldiers that form the backbone of any military force. The Ace Pilots are game-changers on any battlefield, but the grunts are the ones who face the unrelenting horrors of war day in and day out.


The EFSF RXC-76-2 Guncannon First Type units from the Von Braun Iron Cavalry Squadron were the first completed mobile suits that rolled off Anaheim Electronic's assembly lines, supposedly the latest and most state-of-the-art combat units ever produced. Ostensibly to succeed the aging Guntank Early Type, the Guncannon represented a step forward, although not as great a step as Zeon mobile suit technology.

If you have watched Gundam The Origin IV: Eve of Destiny, you'd have seen the slaughter of the entire Iron Cavalry Squadron - all twelve units including the commander unit as well as their mothership. Granted, they were going against Rambal Ral and his prototype Bugu, the Black Tri-Stars in their Zaku Is as well as the Red Comet in his own crimson Zaku I, but losing every friendly unit while not bringing down a single enemy target is a real dampener.

In the pivotal sequence, the Iron Cavalry Squadron made a grand entrance by dropping in from their mothership. At the squadron leader's command, the vanguard fire team opened up with the low recoil cannons, squarely hitting the Zeon squad only to have the monoeye MSes leap from the dust cloud and pepper them with 100mm rounds from their machine guns. Seriously, the Guncannon's armor are more or less made of paper, with a small number of 100mm rounds able to knock one out of commission.

That being said, the kit itself is pretty good. It's a simple, straightforward build with little surprises, but care would have to be taken when putting together the clawed manipulators: those things come apart fairly easily. Articulation wise, it's pretty decent, being able to execute the kneeling pose with little effort. I would have liked for the low recoil cannon to have a greater arc of elevation, but I guess the Guncannon First Type wasn't built for long range fire support to warrant such a feature.

Overall, the Guncannon First Type sports a modern, militaristic design with a wide range of weaponry. Too bad they didn't live up to their implied ferocity in the OVA. 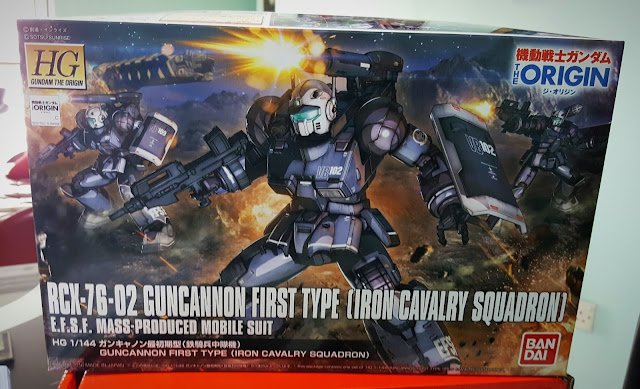 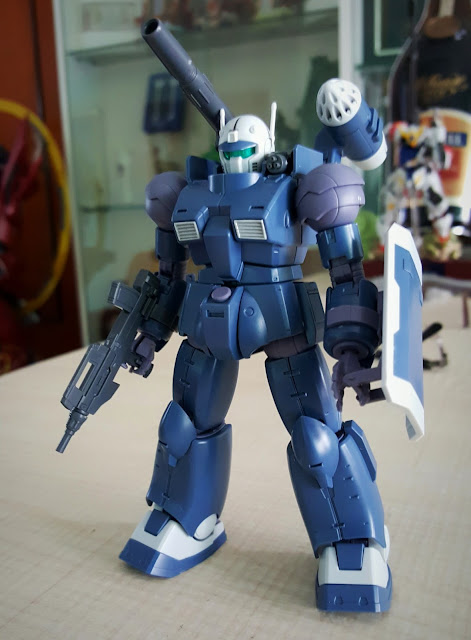 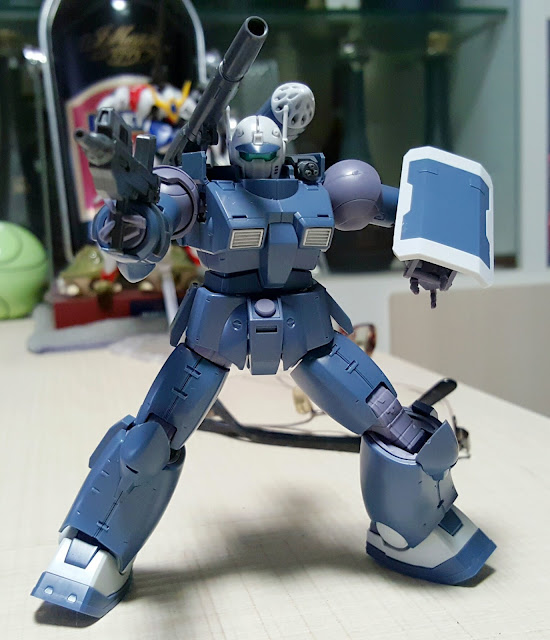 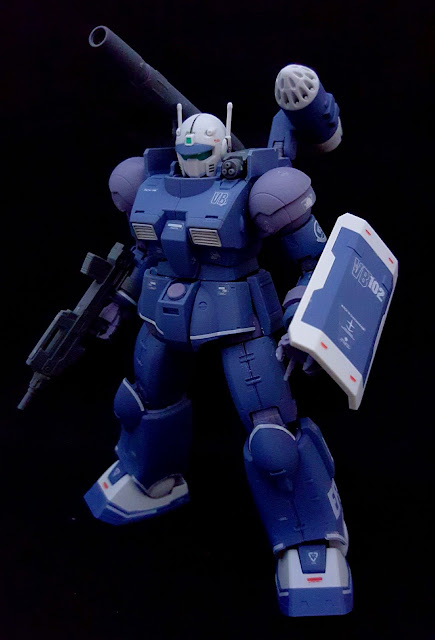 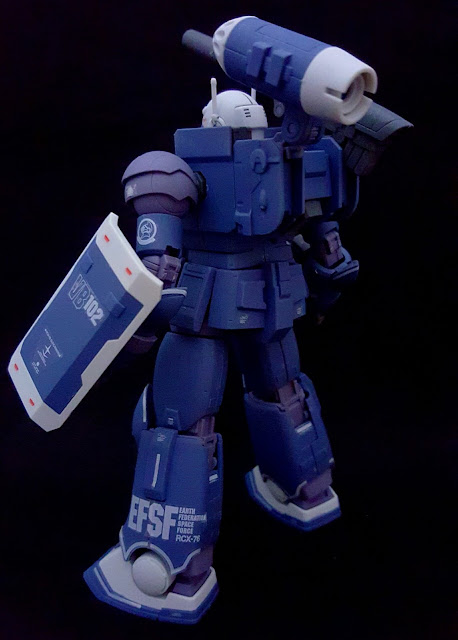 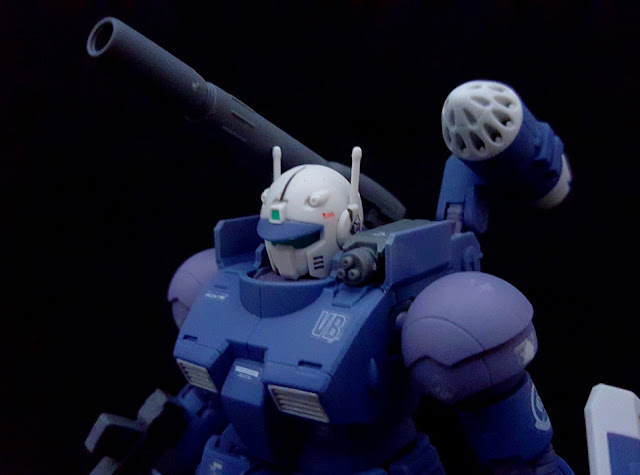 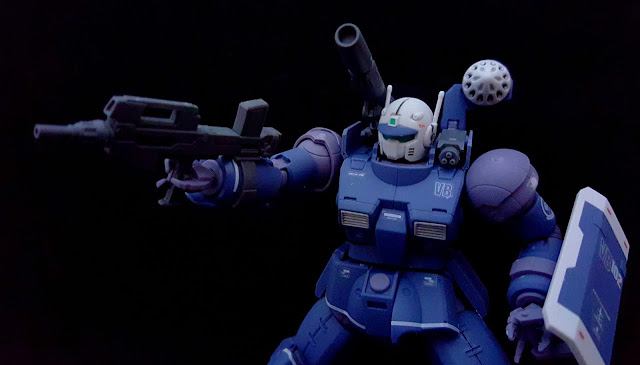 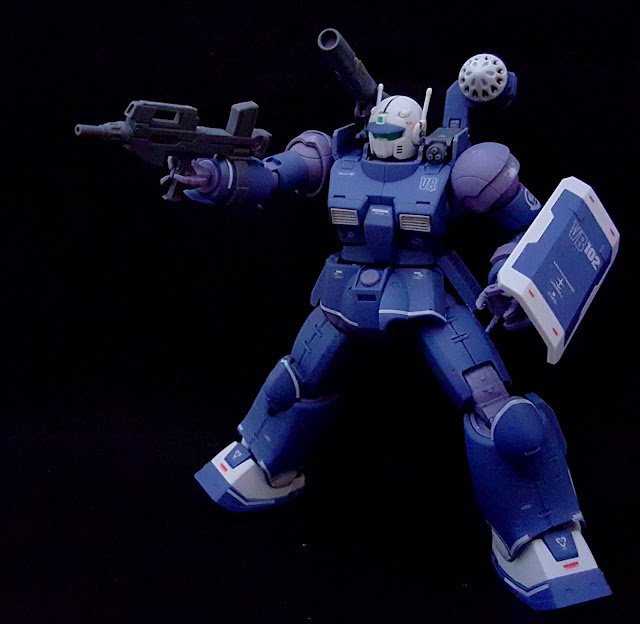 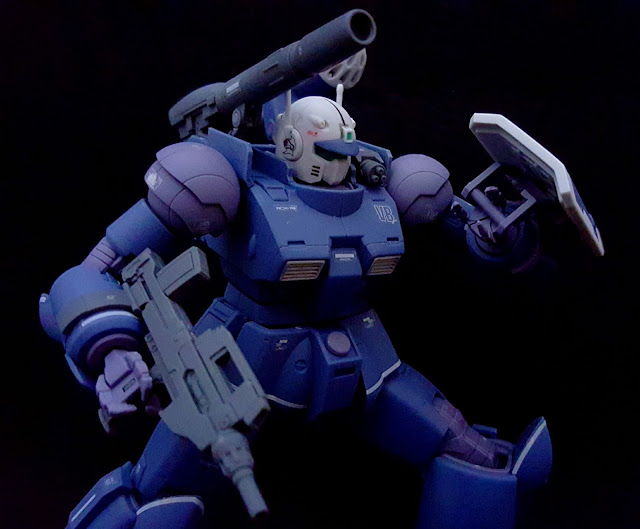 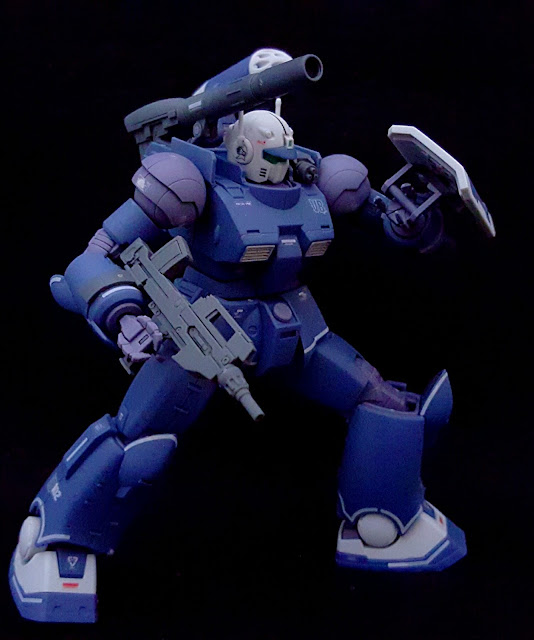 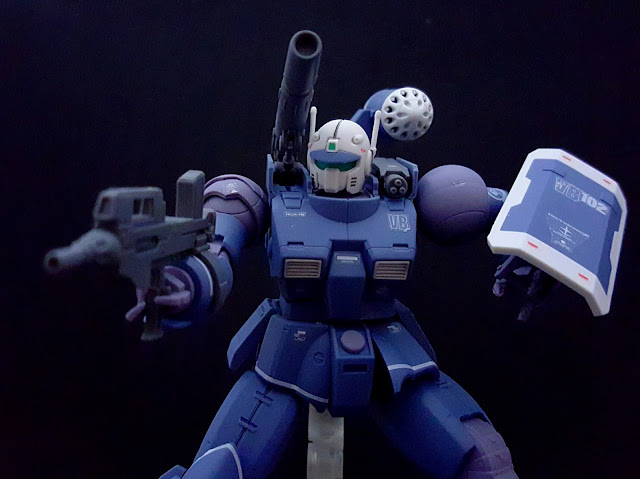 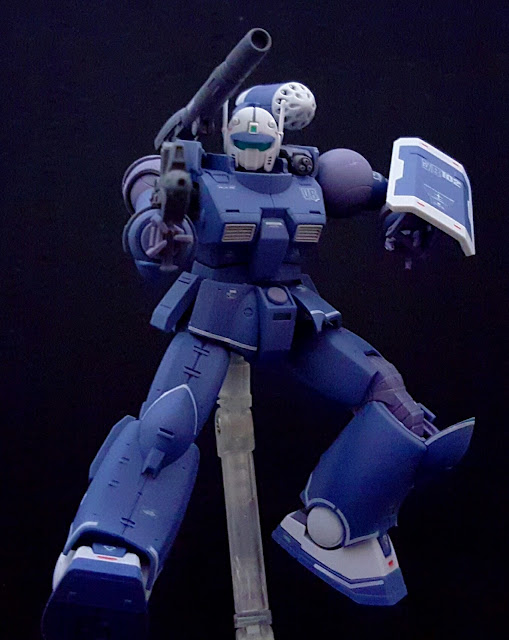 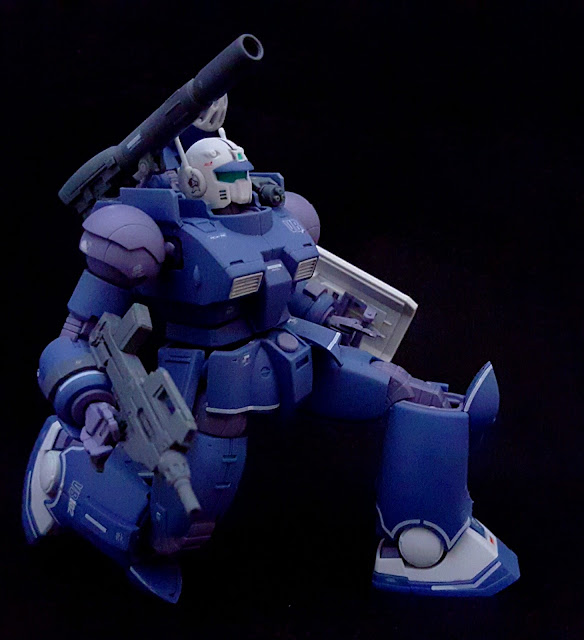 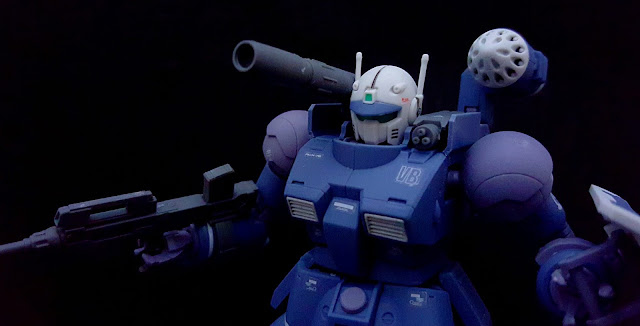 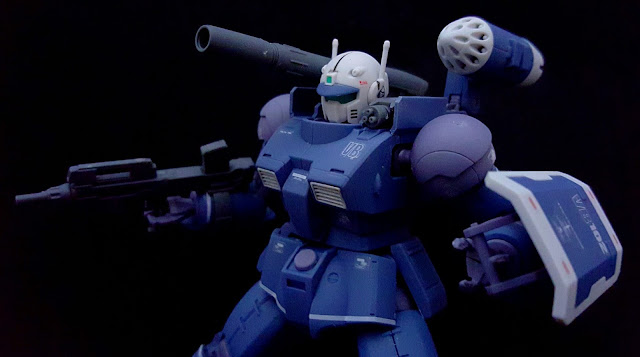 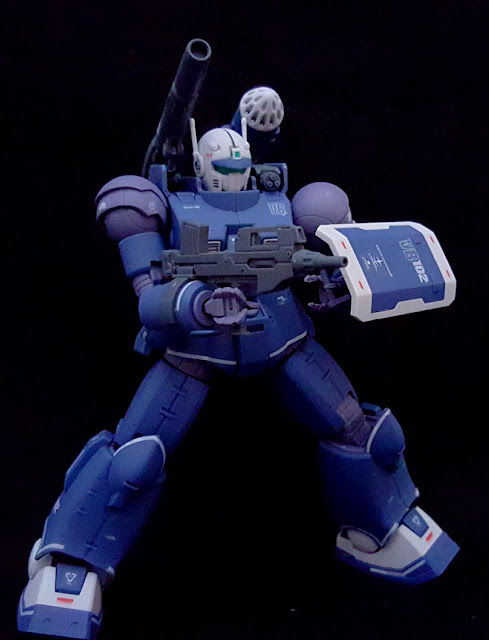 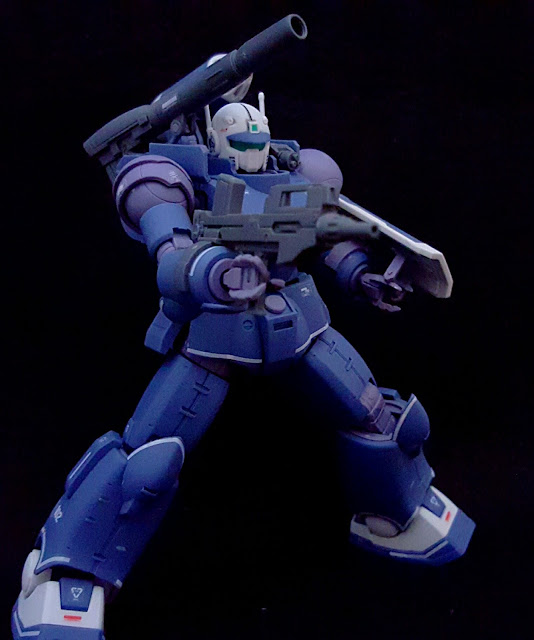 Posted by Gunplanerd at 5:45 PM