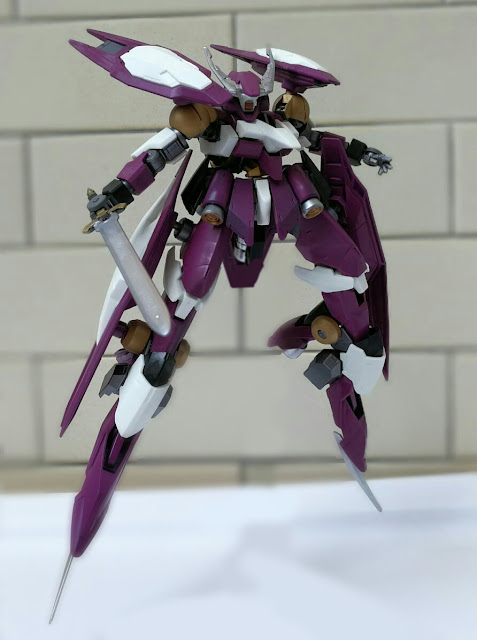 At the end of the final battle of the McGillis Fareed Incident, a modified Reginlaze Julia raised the Barbatos' severed head in victory, signalling the cessation of hostilities and the beginning of a rocky road to an uneasy peace. The final frame of the Reginlaze Julia is pretty significant as it embodies a legend retold countless times throughout the annals of history: the Devil can only be slain by Man, although in Julieta's case, this came at a very, very high cost.


Julieta is arguably the most human character in the entire IBO series, in a universe that is chock full of machine-enabled superhumans who were able to shrug off kinetic penetrators like mere toothpicks. Despite the overwhelming advantage accorded by the Alaya-Vijana system, Julieta refused to become a demon in order to defeat the demons in Tekkadan, instead relying on her skills and her machine(s) to stay alive. In a reversal of the classic tale, Julieta, a human, teamed up with a dragon - the Reginlaze Julia - to defeat the Devil, suggesting that Julieta was open to obtaining power through means other than becoming a demon herself. Being a high performance machine, the Reginlaze Julia was a beast that was difficult to tame, much less control. This was evident in Julieta's first sortie in the machine, as she encountered much difficulty in taking down Amida in her Hyakuren, a mass-production type (albeit tuned) that was about two generations older than the Reginlaze-series. Clearly, Julieta required more training.

In her next sortie, Julieta came up against the Barbatos Lupus Rex, the literal Devil in every sense of the word. Showing more proficiency in controlling the Julia, it was still insufficient as the Barbatos beat Julieta to inches of her life, although she managed to alter the trajectory of the Super Galaxy Cannon at the last minute. Even at this stage, Julieta resolved to get stronger while still remaining human, and finally slayed her adversary on Mars (although said adversary has killed at least a whole platoon of mobile suits, survived an orbital strike, killed some more enemy units before passing away long before his machine stopped functioning).

Before the Reginlaze Julia got assigned to Julieta and took her name, it has a tactical demonstrator unit that encompassed all the cutting edge combat technology that Gjallarhorn had to offer. A high mobility strike unit that focused more on pilot skill, the Reginlaze Viola was initially operated by Vidar as its test pilot, as no other pilot in Gjallarhorn had the necessary skillset, stamina and endurance to drive the machine. Vidar also used this opportunity to gather combat data for the Alaya-Vijana Type E, since the Gundam Vidar/ Kimaris Vidar was still being retrofitted. Therefore, when Julieta informed Vidar that she volunteered to be the Reginlaze Viola's test pilot, Vidar is intrigued, knowing firsthand how difficult it is to pilot the Reginlaze Viola, especially without the Alaya-Vijana system.

The initial rollout version of the Reginlaze Viola had standard mobile suit manipulators, and was armed with a reinforced Knight Blade from a Graze Ritter as well as an armed shield which contained a pair of machine guns, in addition to four machine cannons installed in its shoulder binders. The Viola was outfitted with this relatively bare loadout as the Schlangenschwanz flexible blades, or the Julian Swords as they were later named, were still being perfected. This loadout was later used by Julieta during the final battle on Mars, although she had a new anti-mobile suit sword that was specially developed for the Reginlaze.

Having simple armament did not faze Vidar in the least, who relied on his superior piloting skills and spatial awareness to achieve acrobatic maneuvers with the Reginlaze Viola, fully utilising the multitude of high output thrusters on the machine to close the distance between targets and move on to the next one. The feet blades on the Viola were eventually adapted on the Gundam Vidar in the form of the Hunter's Edge, although the Viola had far greater reach due to the length of its legs.

The Reginlaze Viola was a marvel in mobile suit engineering, and was waiting for a suitable knight to rouse it from its slumber to slay a demon. 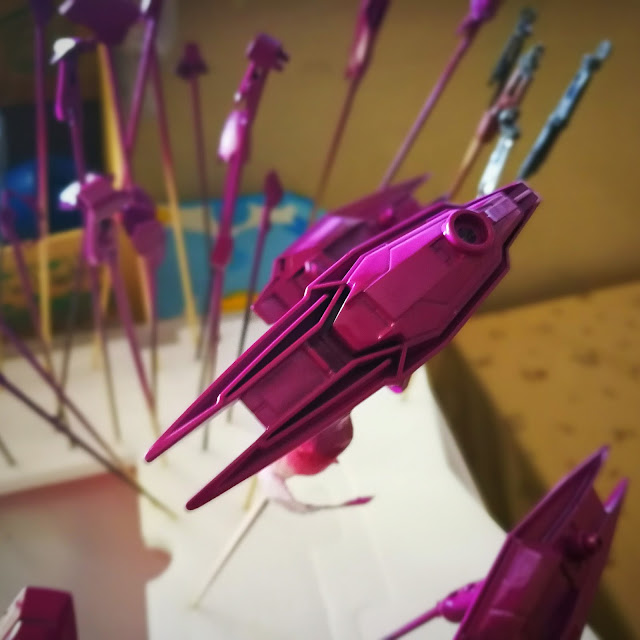 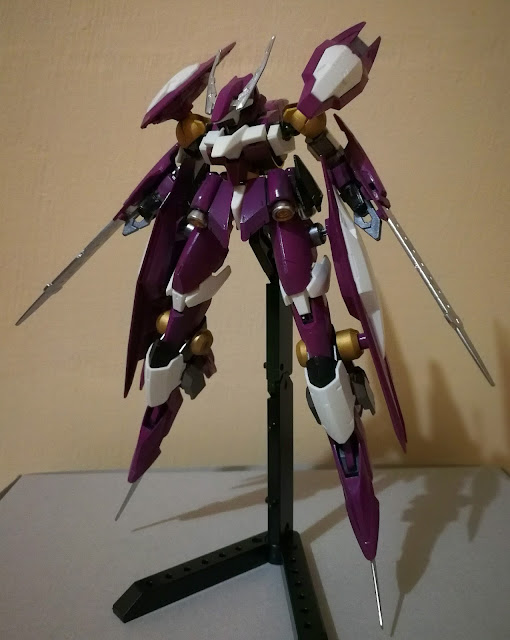 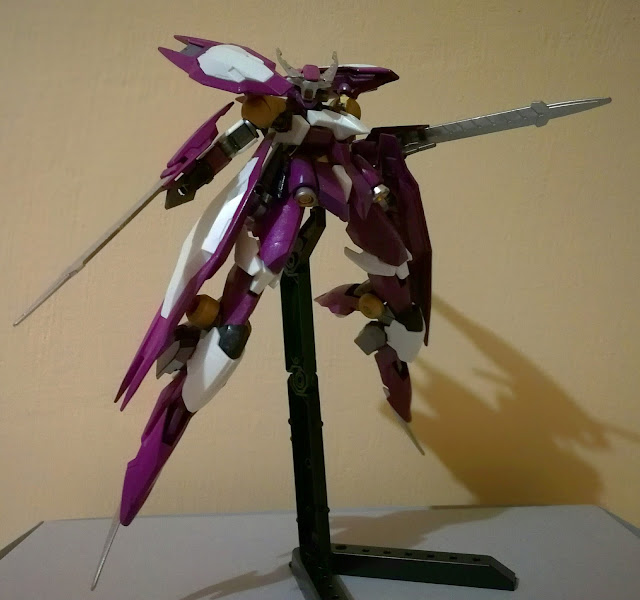 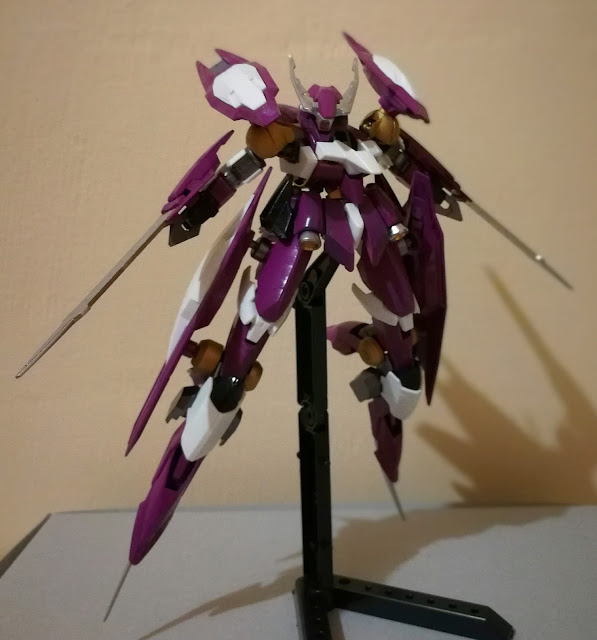 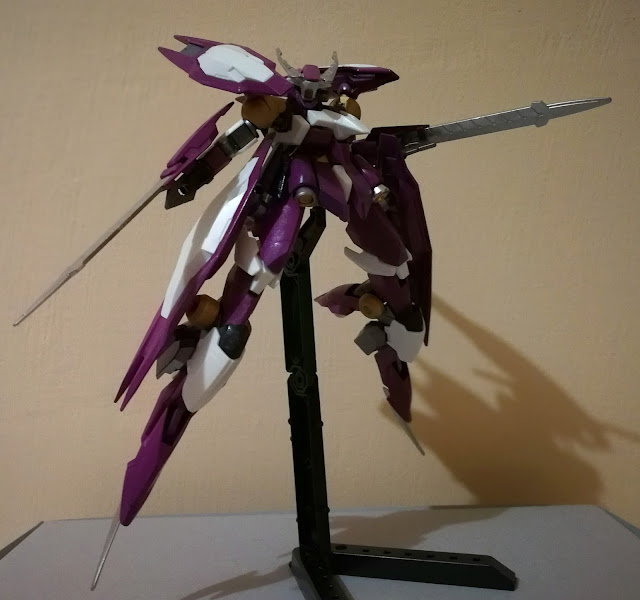 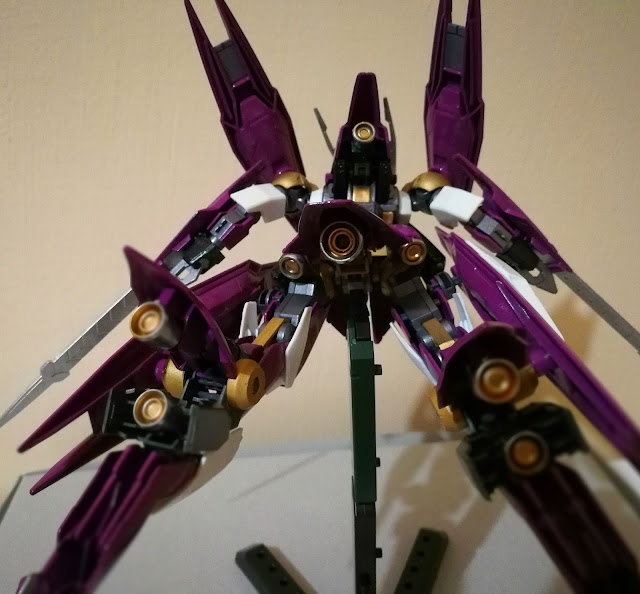 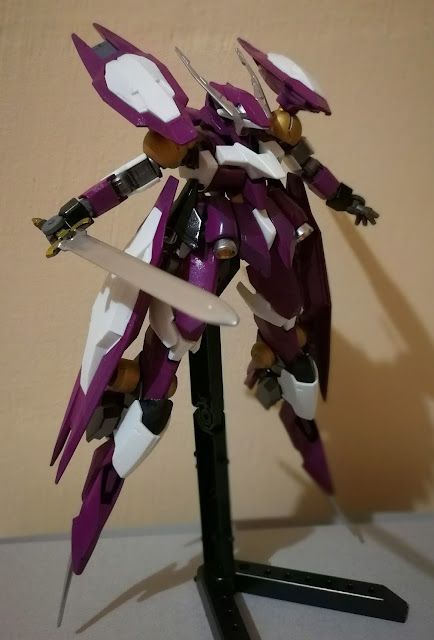 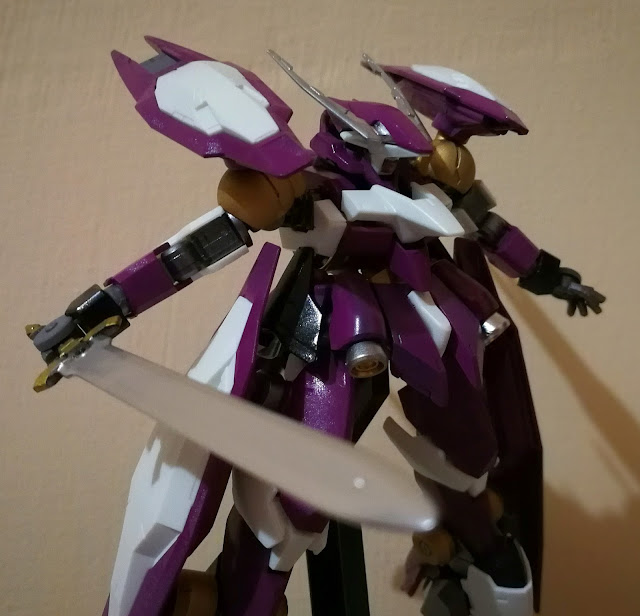 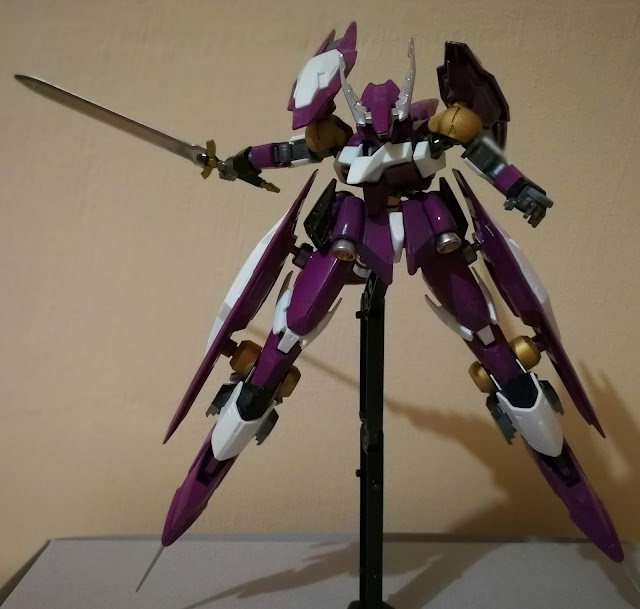 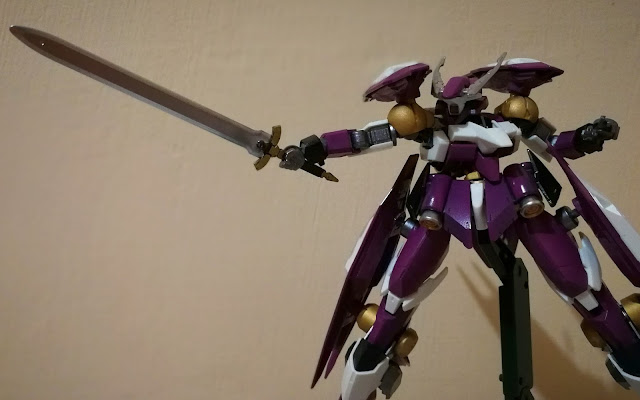 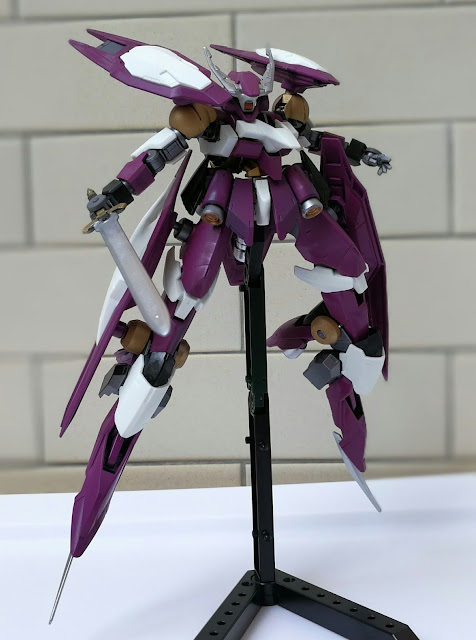 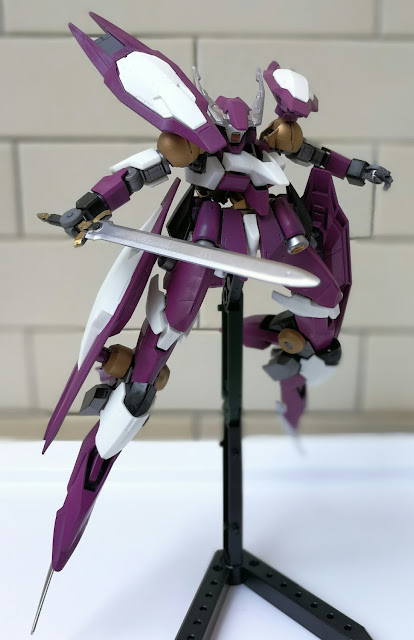 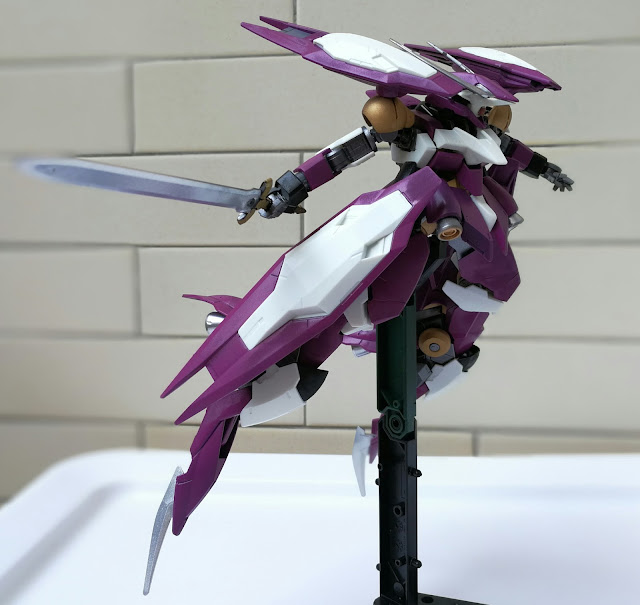 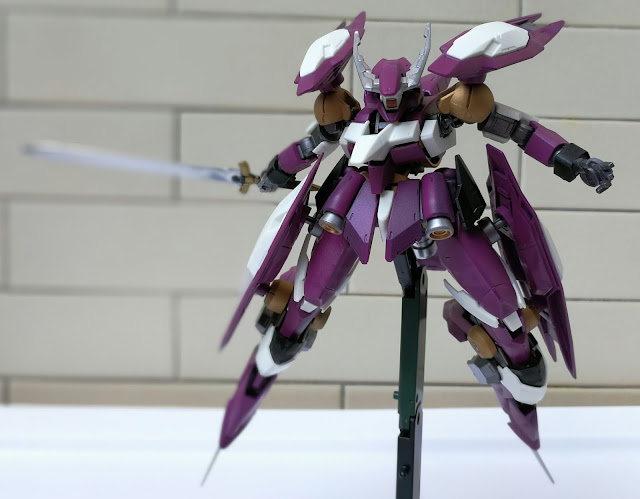 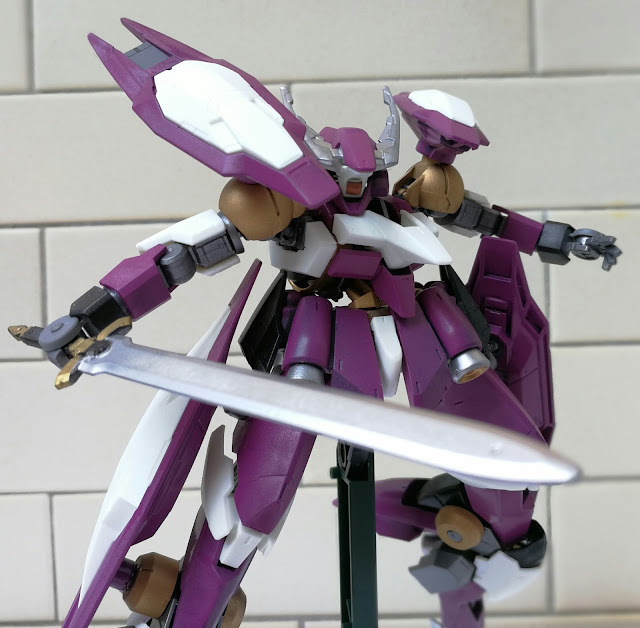 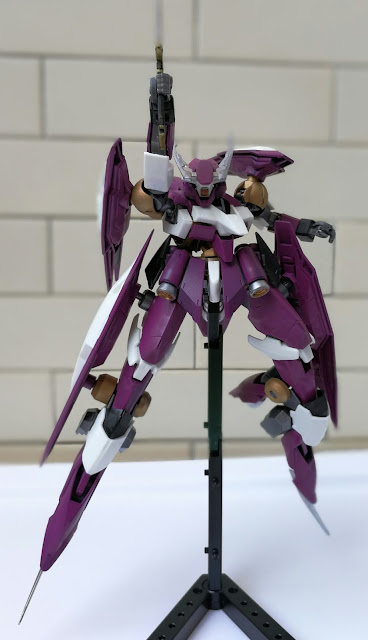 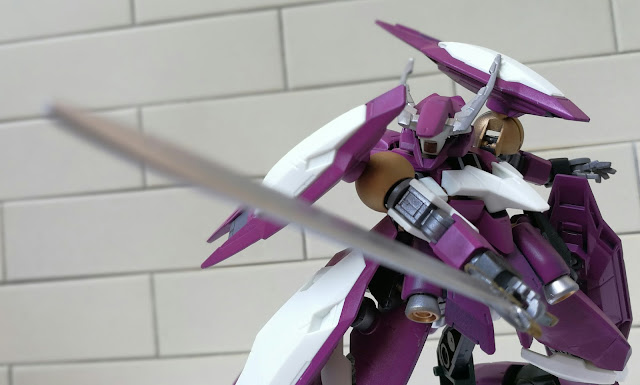 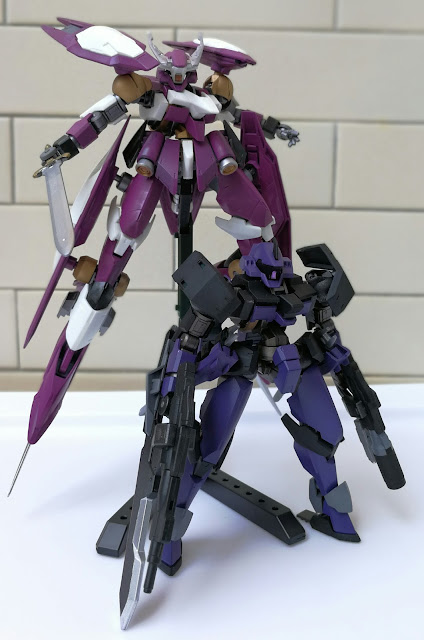