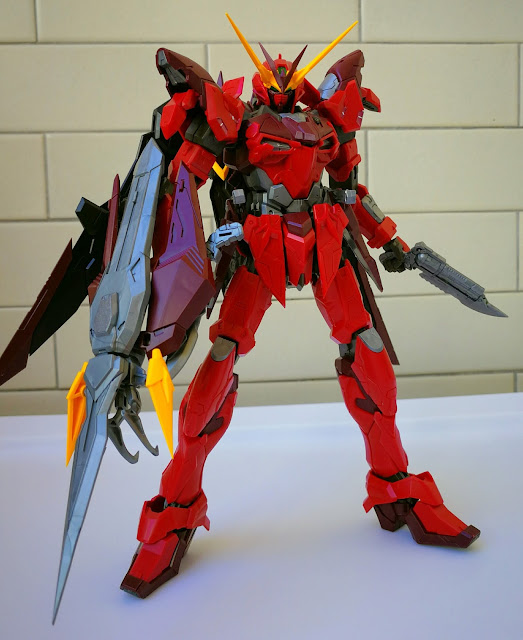 Third party model kit manufacturer Dragon Momoko (DM) has been doing some great work with their MG 1/100 Strike series of model kits, pushing out a good number of different units very quickly. The Divine Testament Gundam is the latest in DM's MG line, incorporating all of its lessons learned and technology developed over the past three years.

So is the Testament a testament of what the company can do?
The short answer: yes, the Testament presents a very encouraging look at how far DM has come since its inception. From ill-fitting HG 1/144 model kits of souped-up AGE mobile suits, DM has successfully differentiated itself from the other "contenders" in the increasingly crowded model kit marketplace to produce popular, crowd-pleasing products. Of course, there is no lack of haters, elitists and purists who only stand by Bandai's quality and engineering (to which there is still no contest), but when DM drops a MG model kit of a mobile suit that is nowhere on Bandai's development radar, it can become very hard to say no, especially if it costs a third of a regular Bandai MG kit.

The Testament is one such model kit. Only existing as official line-art and a Robot Damashii Side MS pre-finished collectible, the Testament is relatively unknown since it didn't appear in any of the Gundam Seed series, even if it bears all the hallmarks of a Seed-era mobile suit. DM's Testament came as a surprise to many because it was announced directly after the release of its Gundam Deathscythe Hell (another DM beauty) and pushed out of production merely a week after. It was also surprising as the announcement came out of nowhere, but understandable since it will definitely make sure use of DM's fantastic MG 1/100 Strike Frame.

Design-wise, the Testament is striking. Bathed in two-toned crimson hues complemented with silver accents and gunmetal frame components, DM's Testament differs greatly from Bandai's Robot Damashii version. Scale difference notwithstanding, DM's Testament looks like it has been given the Metal Build treatment, chock full of edgey features, hard angles and a sharp, lethal visage. From the head unit to the tip of the Trikeros Kai, the Testament is bleeding edge.

Construction-wise, one can expect the usual pitfalls of third-party model kits. DM's plastic is generally harder than Bandai's, and there are some parts that can be quite tough to crack. There are also numerous fitment issues on the Testament, most minor while some require a little work to make the parts fit. Most of the armour parts are undergated, meaning the nub marks are hidden but you have to shave off the remnants before fitting parts together. Some nub marks are also oddly placed, so you have to be a bit more creative when it comes to tackling that nub in the middle of nowhere.

It is also good to have a pair of pliers on hand to assist in connecting parts together, as some of the frame components are extremely tight-fitting and require substantial elbow grease. One gripe I have is the complete lack of fitment for the top of the head unit, where the two V-Fins sit. Instead of connecting with the two pegs on the lower portion of the head unit, the V-Fin portion just sits there like a wig, mobile and shaky. It took some shaving of the pegs coupled with copious amounts of Plastic Magic to secure the head unit, a process that is ultimately worth it since the head looks gorgeous. One word of advice: don't use the eye stickers, the clear green optics work beautifully, nicely reflecting ambient light.

Another potential issue is in the legs. Construction here is fairly manageable, although the way some directions are arrayed can be improved, especially in the knee area where the majority of moving parts are. The directions require you to place a dome-shaped PC unit at the base of the shin, where the ankle and foot will connect to the rest of the leg. This dome-shaped PC unit will never fit into the two intended holes unless you widen them a little with your hobby knife. Annoying, yes, but at least it's an easy fix.

What isn't easy to fix are the craptastic hands. Having released the far superior DM Movable Hands 2.0, I fail to see why DM chose to bundle the awful DM Movable Hands 1.0 with the Testament. You can clearly see that the hand units are the oddities in the entire set, with massive amounts of excess flashing as well as a ugly grey colour scheme. Even with the most delicate of hands, it will take a miracle to free one from its plastic prison, and take another miracle to have it freed in one complete piece. Thankfully, DM had the foresight to include the fixed-pose hands that are bundled with its DM Movable Hands 2.0, so the Testament doesn't need to go hand-less. However, quite a bit of modification will have to be done to the hands - particularly the trigger hands - before they can be used to wield the Testament's weapons.

And what awesome weapons they are. The handguns and revolvers are intricate silver affairs, with a surprising part-count, that look so good. The Trikeros Kai is large, edgey and full of smaller blades, sleeving over the Testament's arm sturdily like a well-fitting glove. The Divine Striker, although complex during construction, is one of the best looking Striker Packs out there, with its bat-like countenance and more apparent grappling claw gimmick.

Put everything together and you get a Divine Testament Gundam that looks FANTASTIC simply as an out-of-box straight build. It is also stout to the point of being stiff, with joints hardly moving even when shaken like a ragdoll. That being said, the Testament is able to achieve a dynamic range of motion thanks to its Frame and well-positioned armor pieces, although it is best displayed on an action base that can showcase the most of its edginess.

The Testament is a great addition to DM's line of MG model kits, and I look forward to the Astray Out Frame D (since some of the runners in the Testament are labelled with the Out Frame instead of the Testament)! 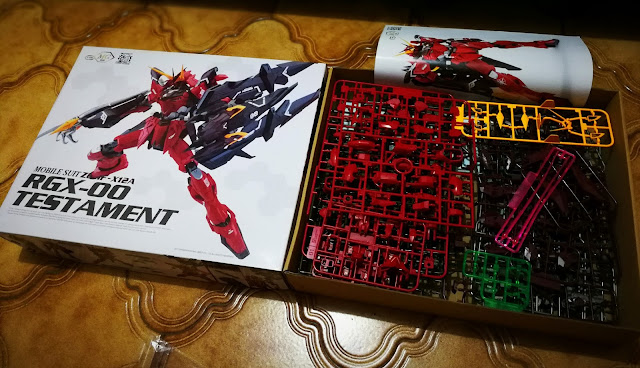 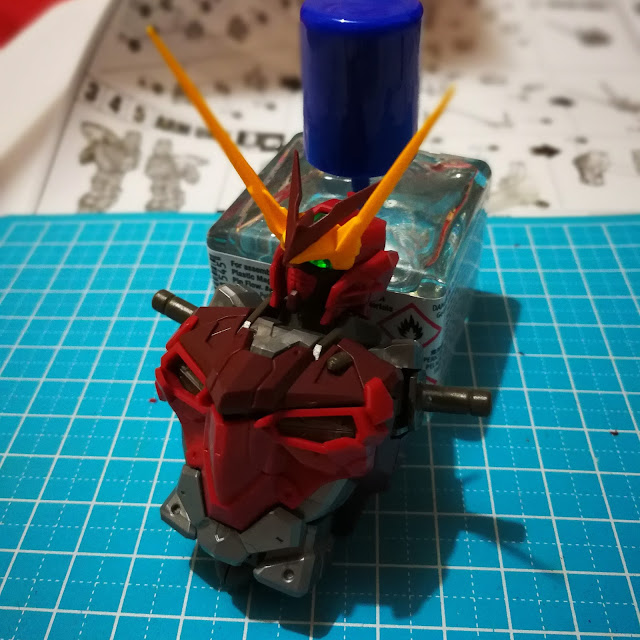 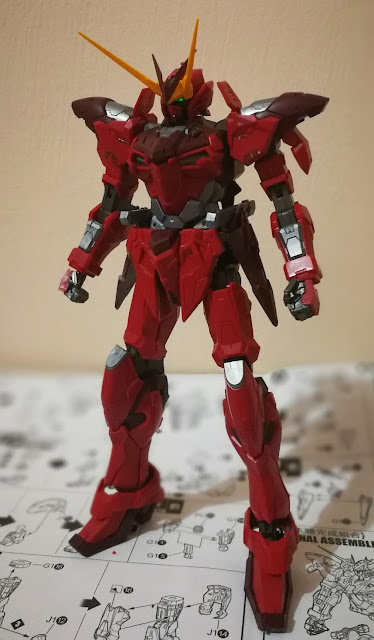 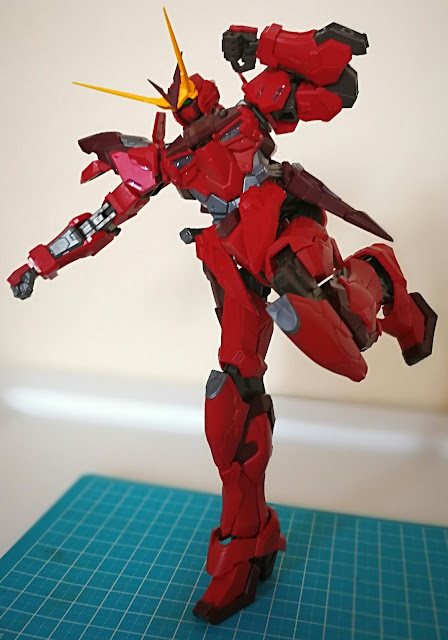 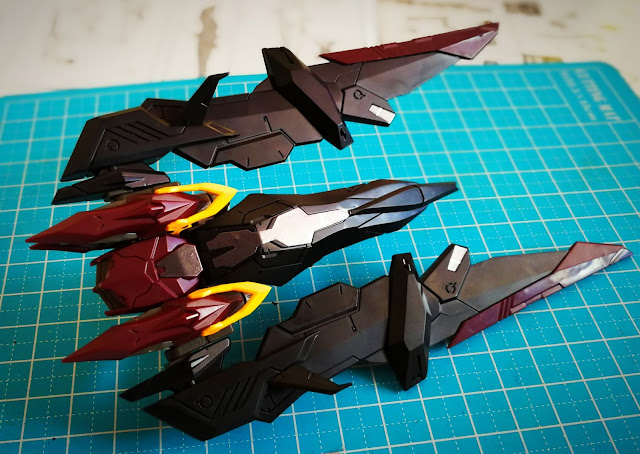 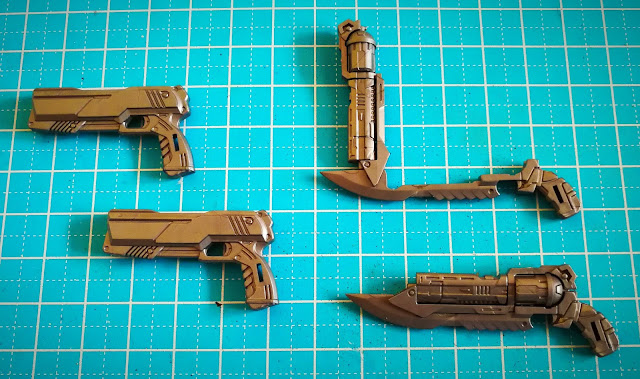 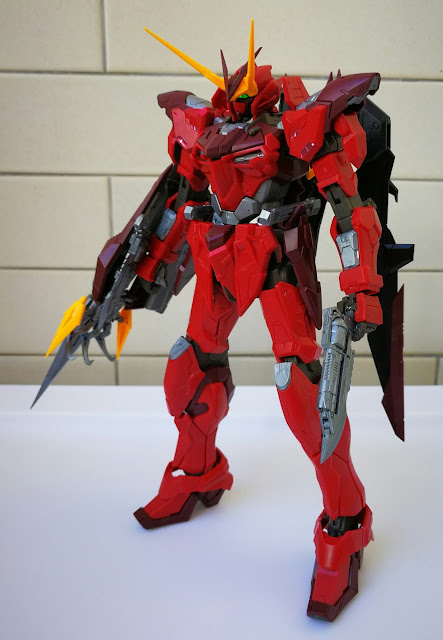 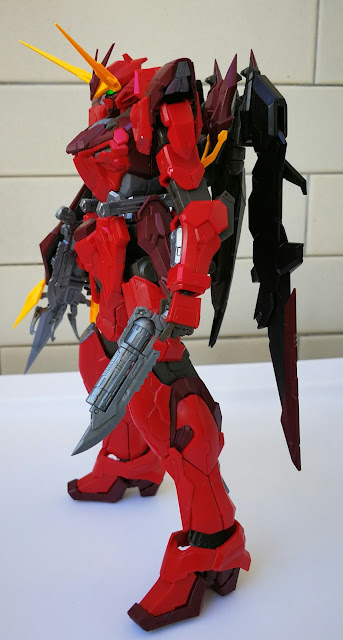 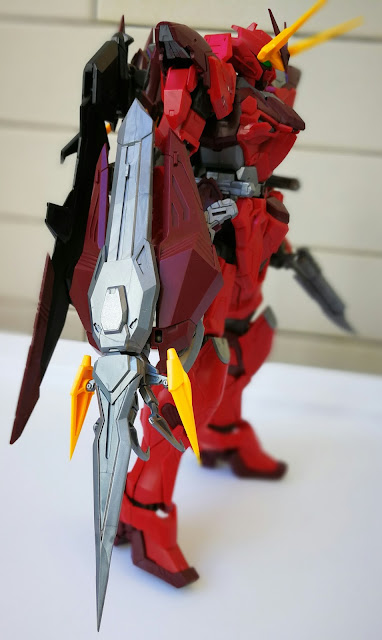 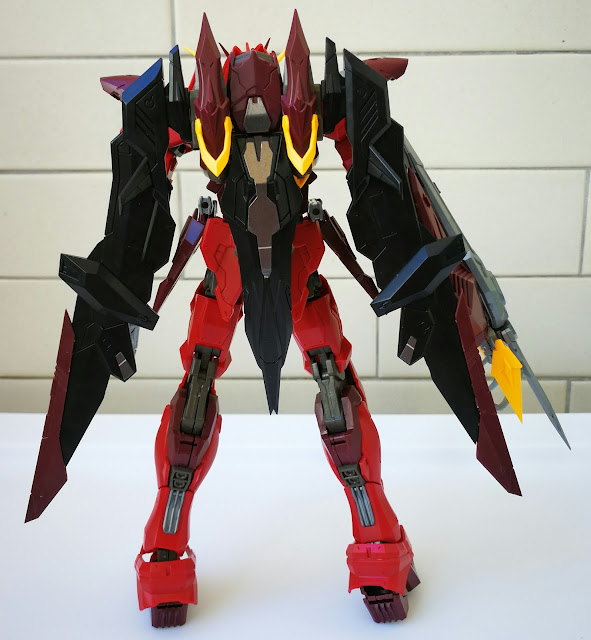 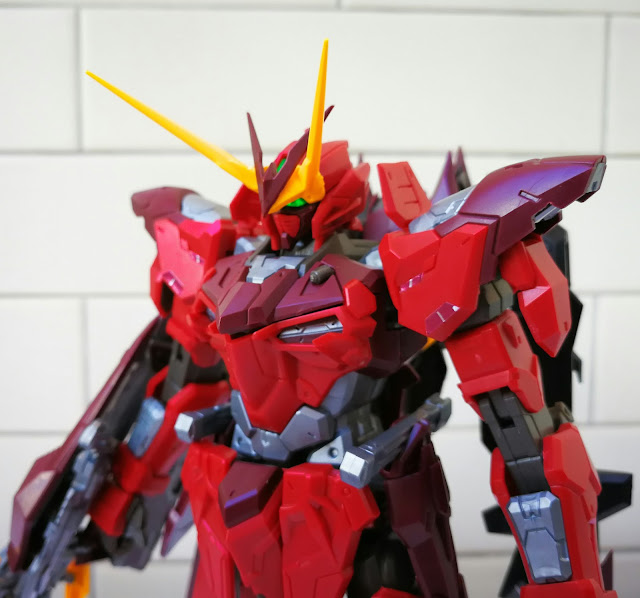 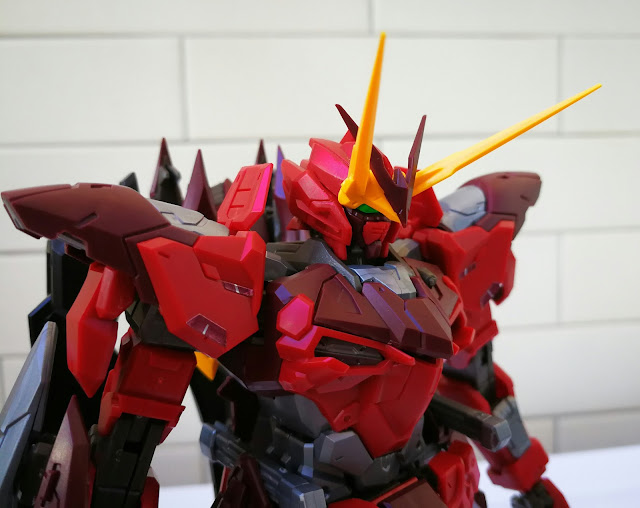 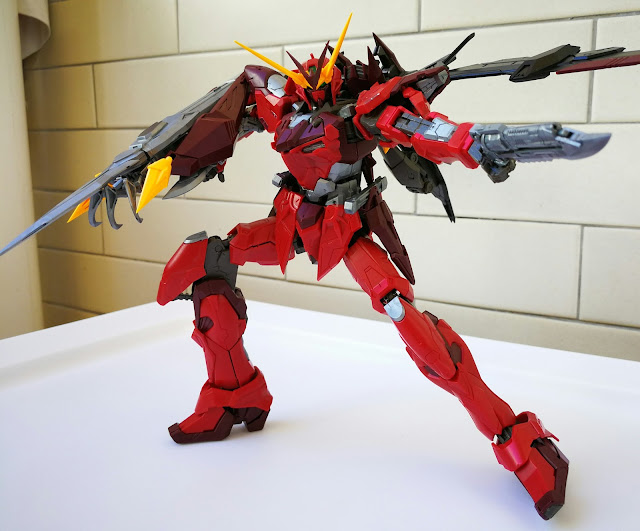 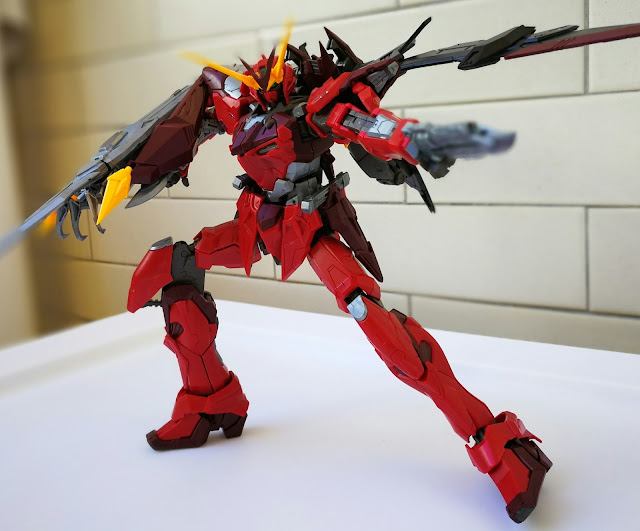 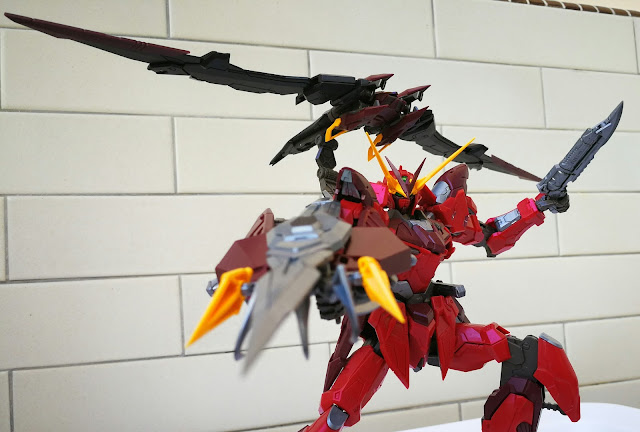 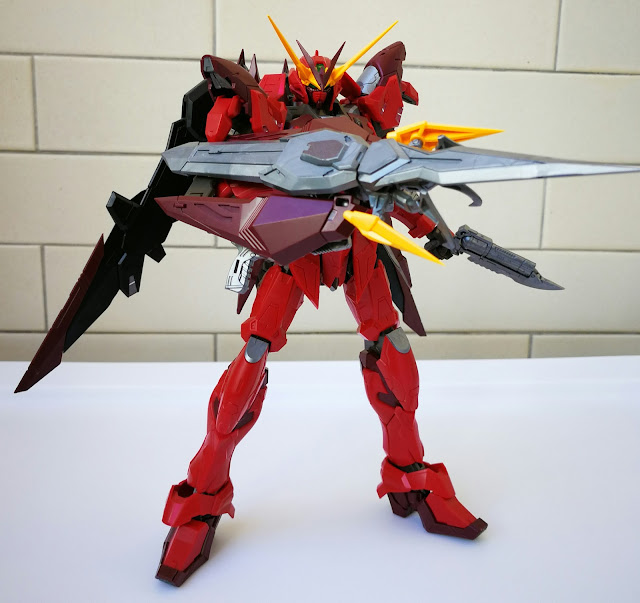