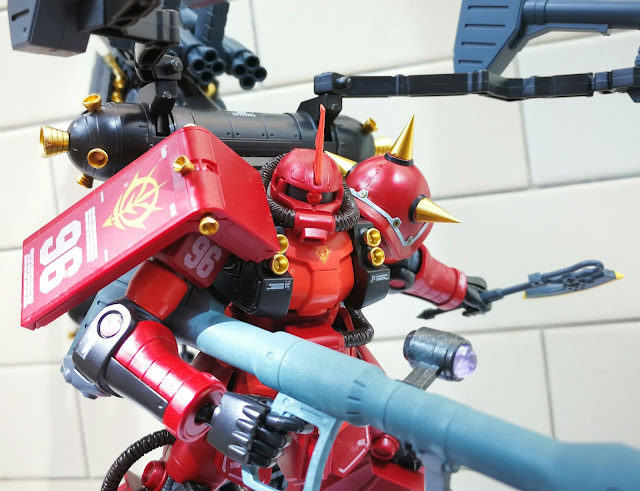 Even by Thunderbolt Sector standards, the Psycho Zaku is over the top!


By now, we all know that the Gundam Thunderbolt series is basically a licence for Bandai to sell us ridiculously-loaded variants of classic mobile suits as a brand new line of High Grade and Master Grade model kits. As much as the designs border on utter ridiculousness, they do have their charm, invoking sentiments of the Armored Core series and also playing on our inner eight-year-olds who like to put as many guns as possible on any tank, ship or giant robot. Given the backstory and background, the designs also (kinda) make sense, like the Full Armour Gundam with its multiple shields, gazillion thrusters and verniers as well as a battleship's complement of weaponry to help Io Fleming circumvent the dangers of the Thunderbolt Sector and defeat the Federation's enemies.

Then we have the Psycho Zaku.

As the Living Dead Division's answer to their own White Devil problem, the Psycho Zaku can be said to be a desperate measure that came out of desperate times. With the Full Armour Gundam wreaking havoc on the Living Dead Division's mobile weapons, the Psycho Zaku represents their last ditch effort to save themselves and by extension, the Principality of Zeon.

Essentially a largely regular Zaku II High Mobility Type piloted by ace pilots such as Johnny Ridden, Shin Matsunaga and Uma Lightning (all of which have their own P-Bandai exclusive releases), the Psycho Zaku bears the trademark piping covers present on all Thunderbolt Sector mobile suits to protect their joints from the debris in the shoal zone as well as a buttload of thrusters and verniers everywhere on its frame. While most Zeonic ace pilots are happy to wield a couple of main weapons and backed up by another couple of supporting armament and equipment, the Psycho Zaku is loaded with a platoon's worth of heavy weaponry. It's as if the engineers of the Living Dead Division decided to load everything they could find on their ship onto the Psycho Zaku that included huge-ass boosters, weapon racks and sub-arms.

The High Grade 1/144 model kit of the Psycho Zaku actually comes into variants: an older manga-style set as well as a newer anime-style one, with their colour schemes being the only difference (the manga-style one has a darker, duller colour scheme). Both sets come with a ridiculous amount of weaponry: two 360mm Giant Bazookas, three 280mm Zaku Bazookas, four Sturm Fausts, one 120mm Zaku Machine Gun and one standard heat hawk. The set also comes with two trigger hands, two holding hands and two open hands.

An interesting thing to note is that the HG and MG versions of the Psycho Zaku have notable differences. The most obvious difference is that the MG version has a THIRD booster attached to an already-overloaded backpack and this addition is really just the HGUC 1/144 Neo Zeong's leg booster. The next difference is the inclusion of a Beam Bazooka that replaces one of the 360mm Bazookas. Adding on to that, all three of the HG's 280mm Zaku Bazookas are switched to 360mm Giant Bazookas in the MG version, which kinda makes it more anime-accurate.

Given the massive backpack and arsenal of weapons, the HG Psycho Zaku is understandably a bitch to pose. However, the joints are all tight enough to ensure good grips and snug fits, but support still has to be given to the backpack. With a good action base, the Psycho Zaku will definitely be able to hold its pose, you just have to be a little patient with it. 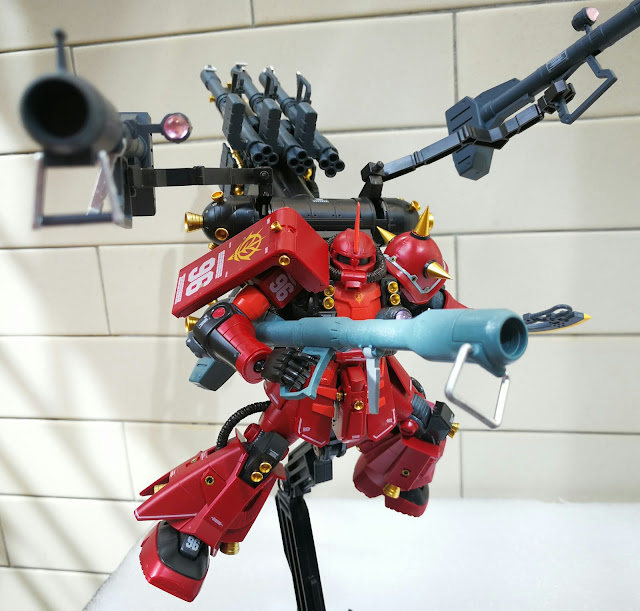 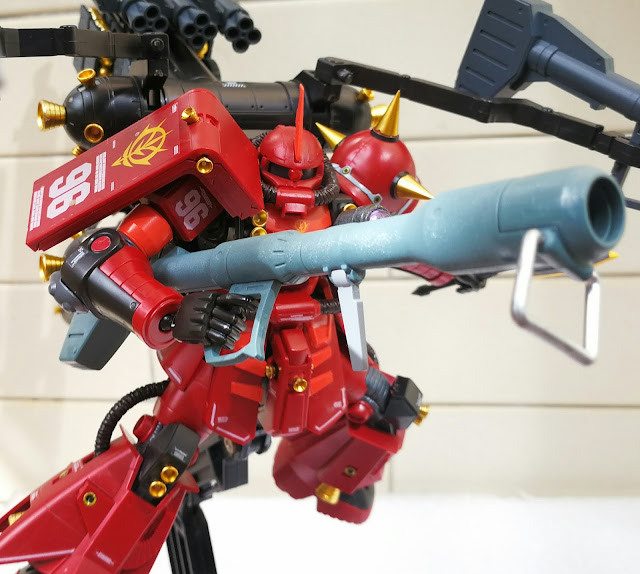 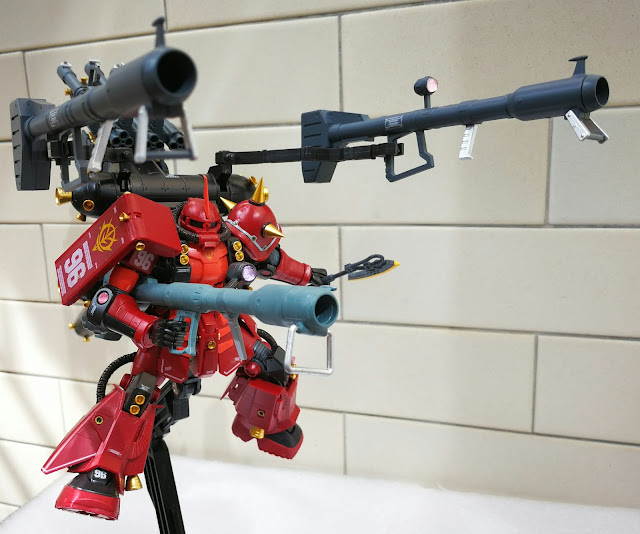 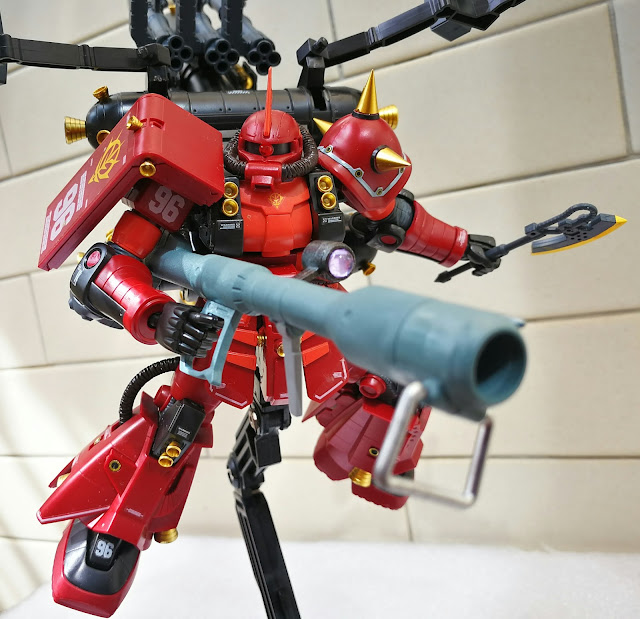 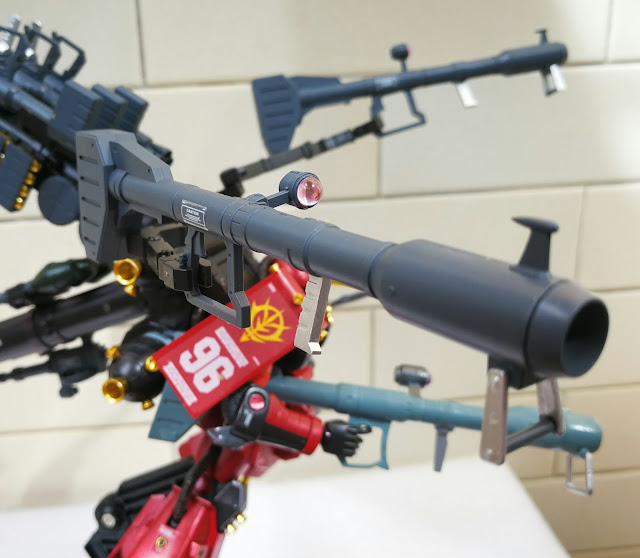 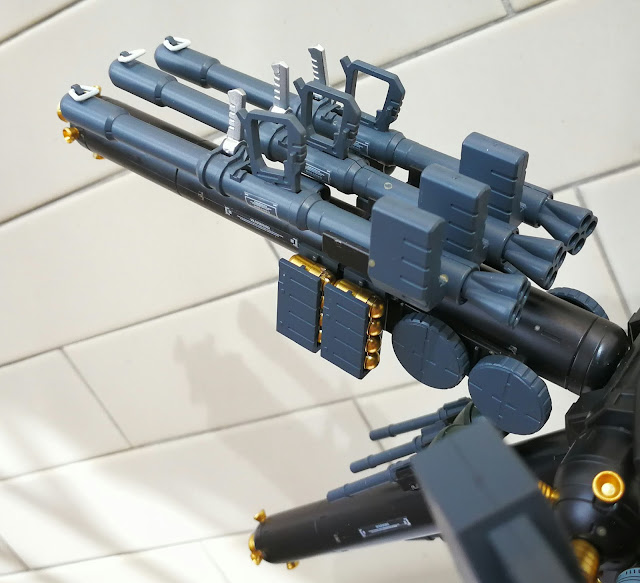 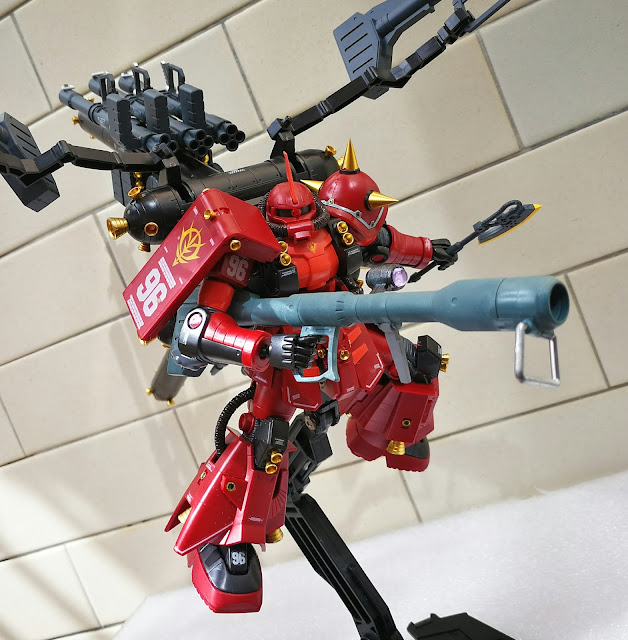 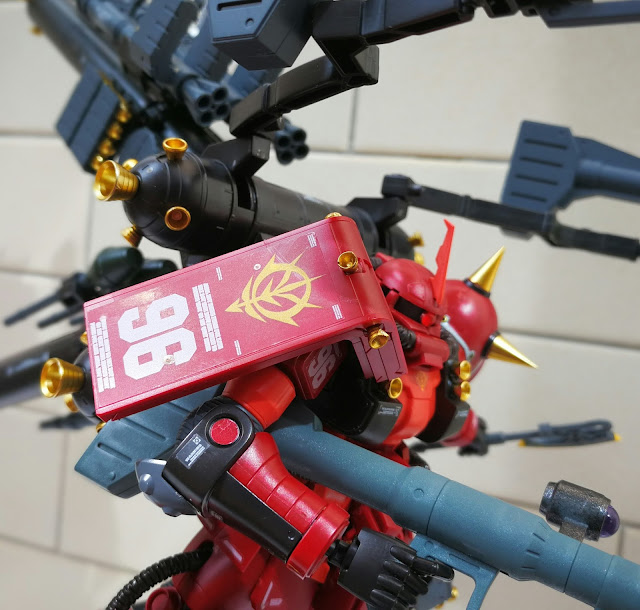 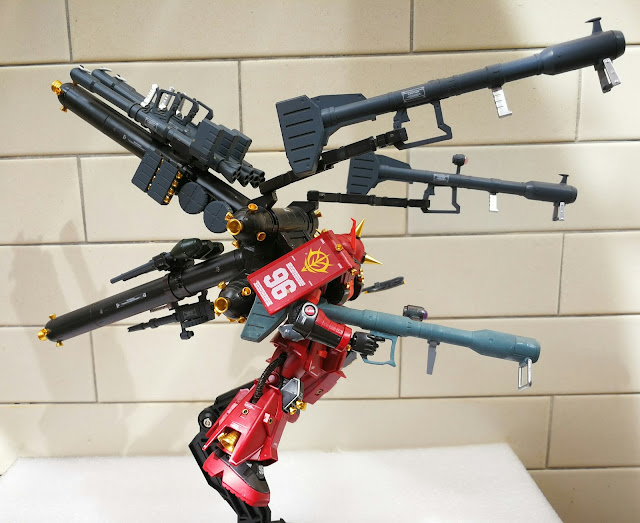 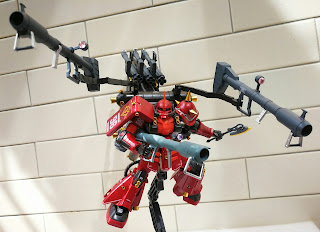 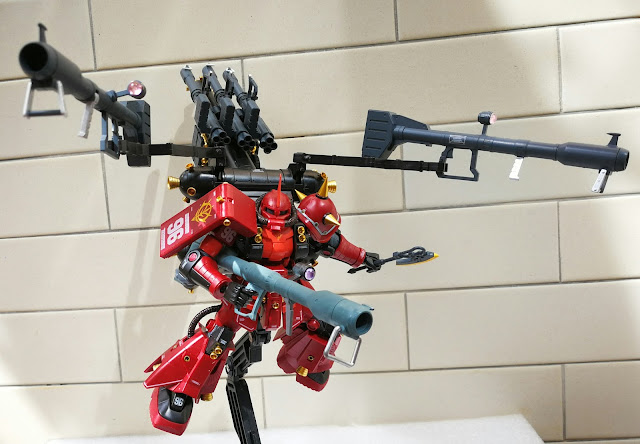 Posted by Gunplanerd at 4:55 AM