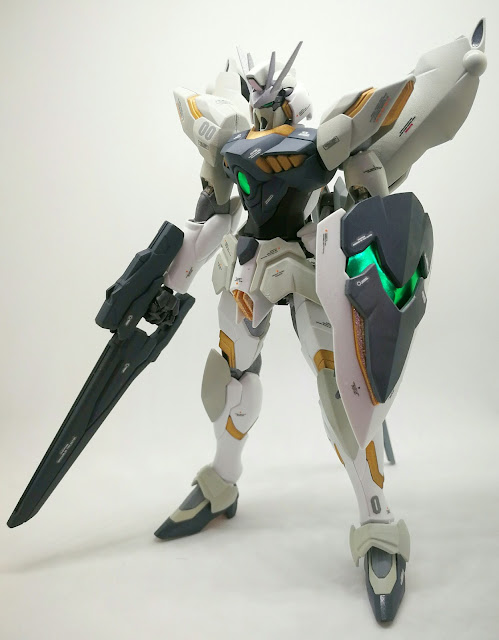 Arguably the best thing that came out of the Gundam AGE series!
As the first completed variant of the Gundam Legilis, the Legilis Unit 00 "Onyx" or Legilis Onyx sported a dull, utilitarian colour scheme that was more befitting of a war machine than as the primary-coloured symbol of power preferred by Vagan Supreme Leader Fezarl Ezelcant. But make no mistake: the Legilis Onyx was still every inch the superior machine it was built as, with performance easily surpassing 99 percent of all contemporary mobile suits.

The Legilis Onyx would eventually be tuned, refined and repainted into the Supreme Leader's version of the mobile suit that first appeared in Kio's Arc of the anime series, but it was first tested and put through its paces by an unknown Vagan ace pilot. The data collected would eventually be distributed to all 23 research groups for their use to create more Legilis-type mobile suits to turn the tide of the long drawn out 100 Years War.

The first model of the Legilis Rifle was still a formidable piece of hardware that featured devastating firepower with more usage flexibility. As compared to the fixed angle chest-mounted Beam Buster, the Legilis Rifle allowed the pilot to acquire and engage targets quickly, with X-Rounder reflexes bolstering target acquisition rates to lethal levels. A single shot from the Legilis Rifle was more than sufficient to gut any mass produced mobile suit, even those coated with electromagnetic armour. Drawing power directly from the Legilis' powerful generator, the rifle could be fired for lengthy amounts of time before requiring a recharge. The weapon could also generate a focused, prolonged beam that can cut through even the toughest armour or fire off rapid beam bursts to ward off oncoming attackers.

The only close combat weapons mounted on the Legilis, the beam sabers generated by the palm-based beam vulcans were strong enough to slice through battleship armour. Combined with the Legilis' acrobatic agility, the weapon became a ribbon of death as it cut across the battlefield.

By deploying the pair of draconian wings mounted on its backpack, the Legilis Onyx could achieve extreme levels of speed and agility that could only be controlled by the most skillful pilots. Combined with the many verniers and thrusters mounted all over Legilis' frame, the mobile suit itself became a weapon when enveloped with a dense screen of beam bits deployed from the shield, a feat that would later be replicated to deadly effect by Galette Zeheart in his Legilis R.

Conceived as the weapon to end the 100 Years War in Vagan's favour, the Gundam Legilis Unit 00 set the standard for all Legilis type mobile suits, giving the Martians the combat edge that they so desperately needed. 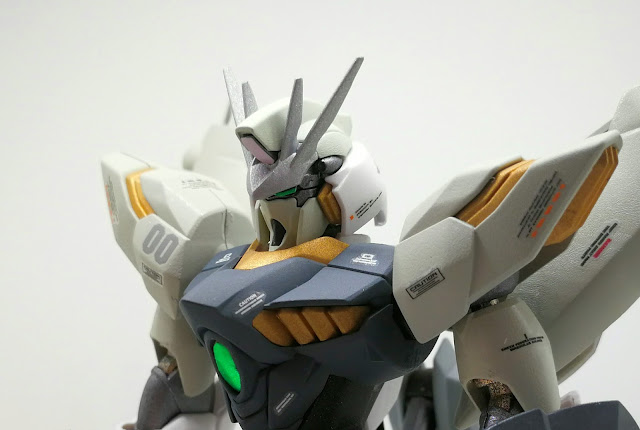 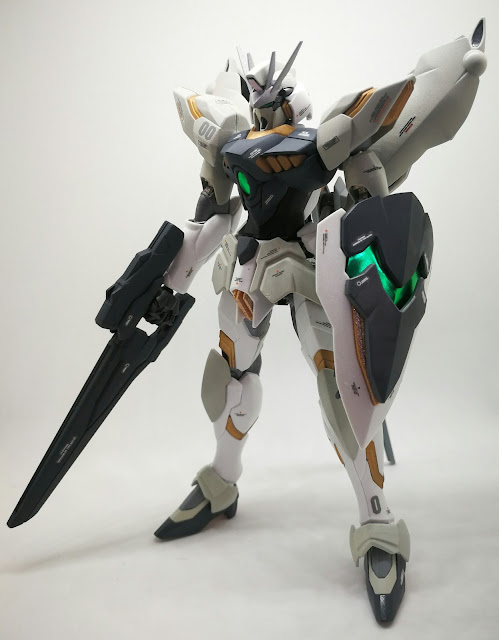 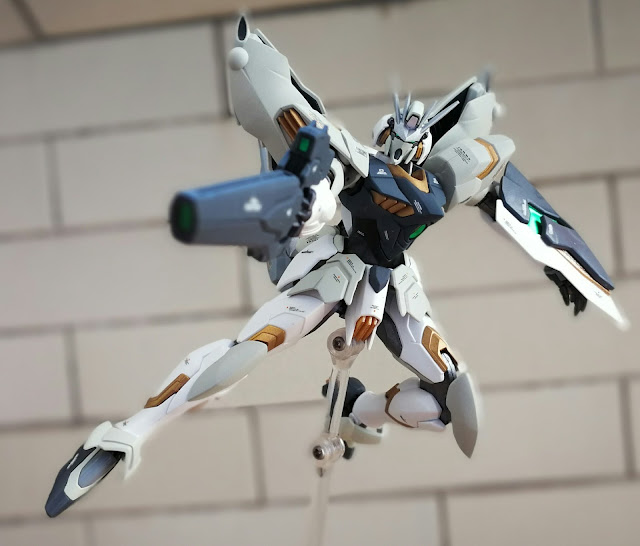 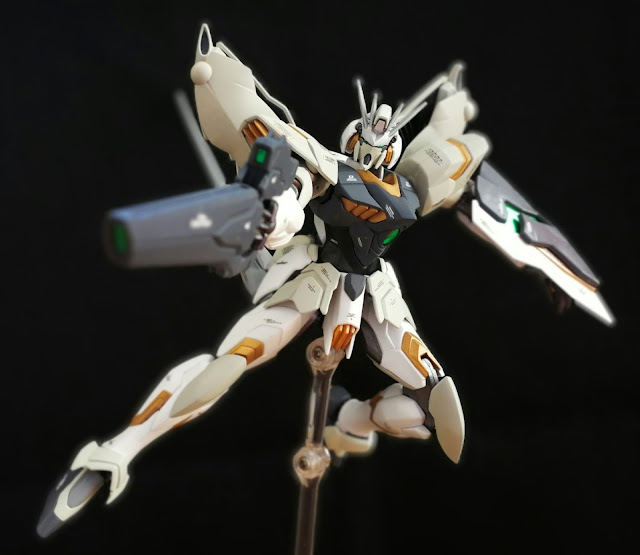 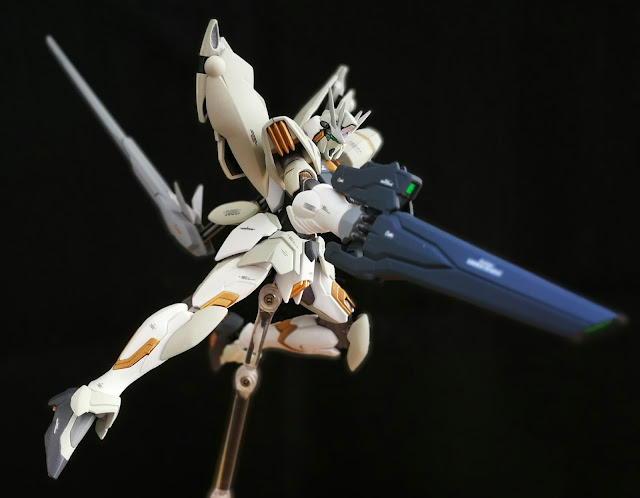 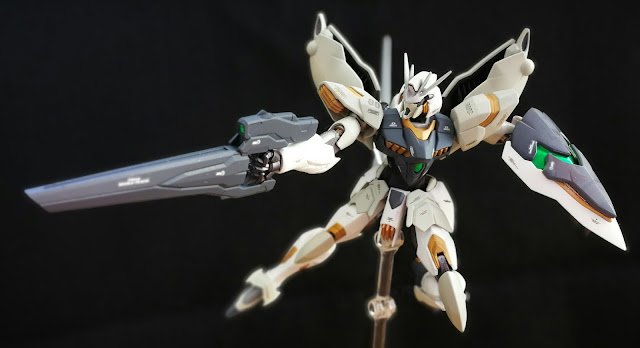 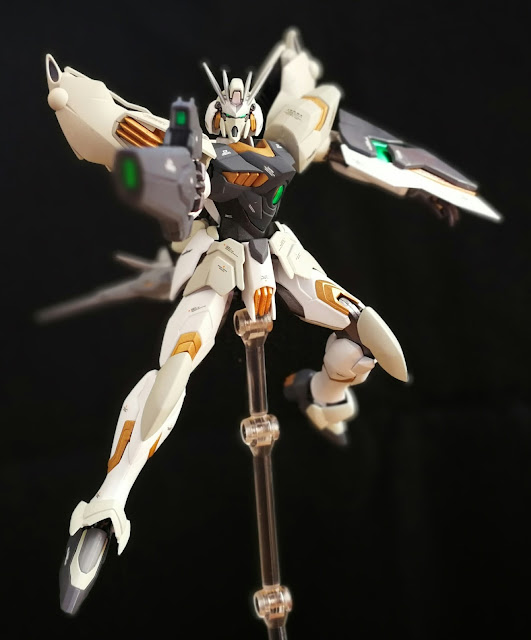 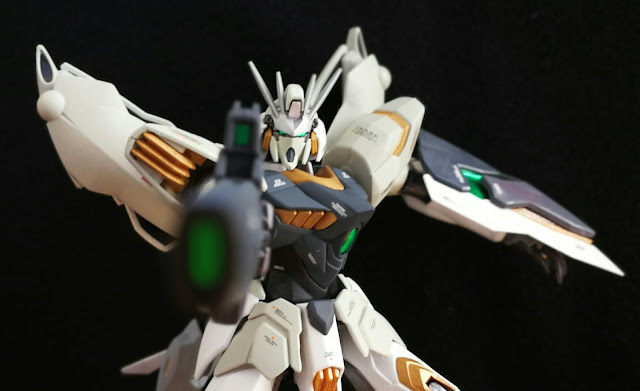 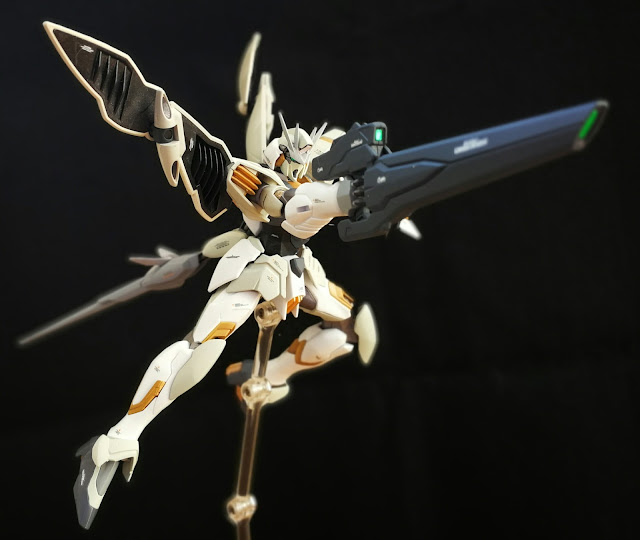 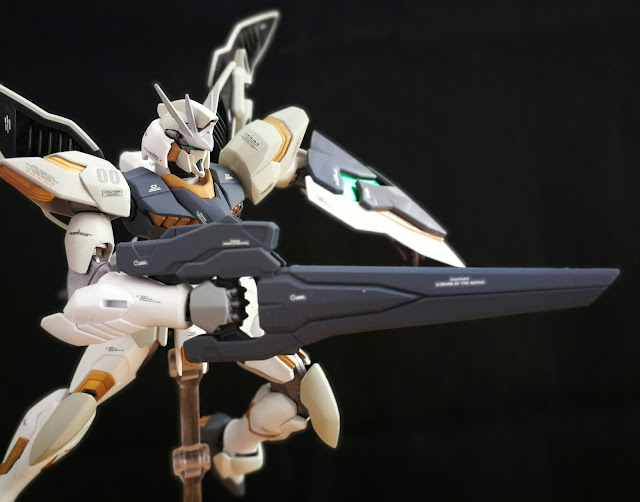 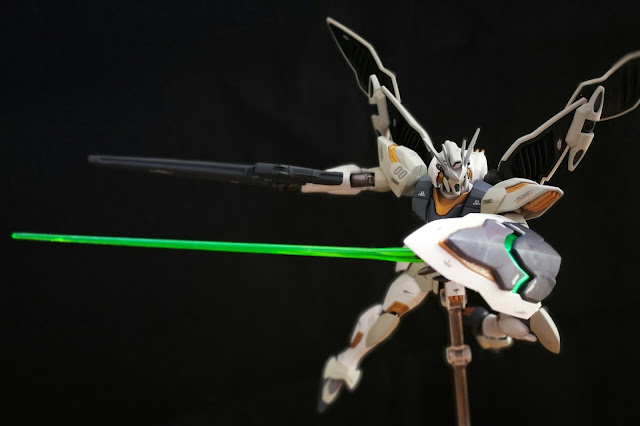 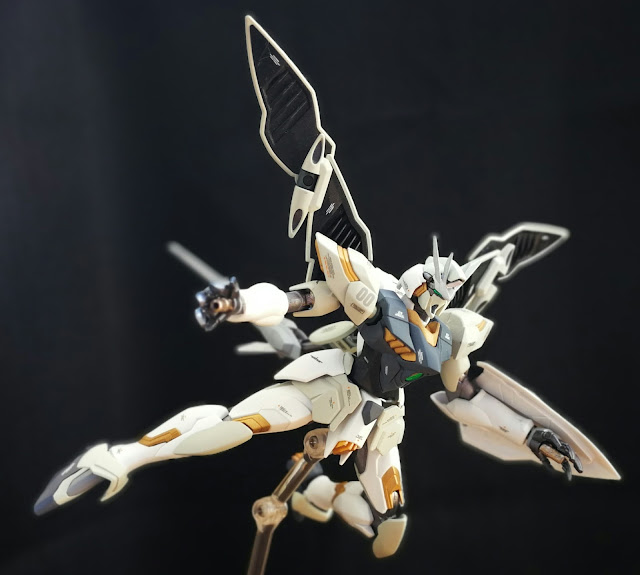 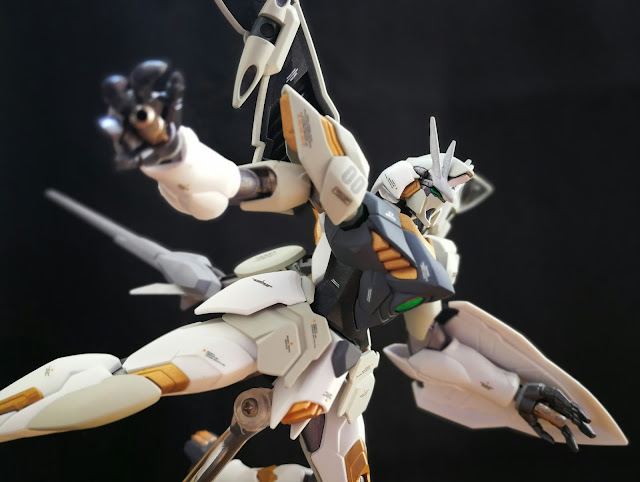 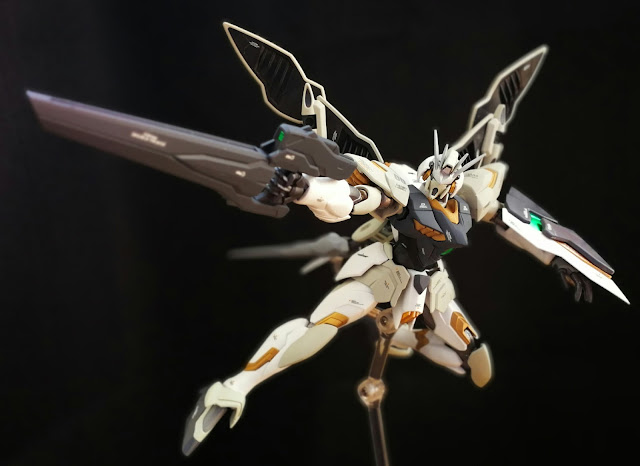 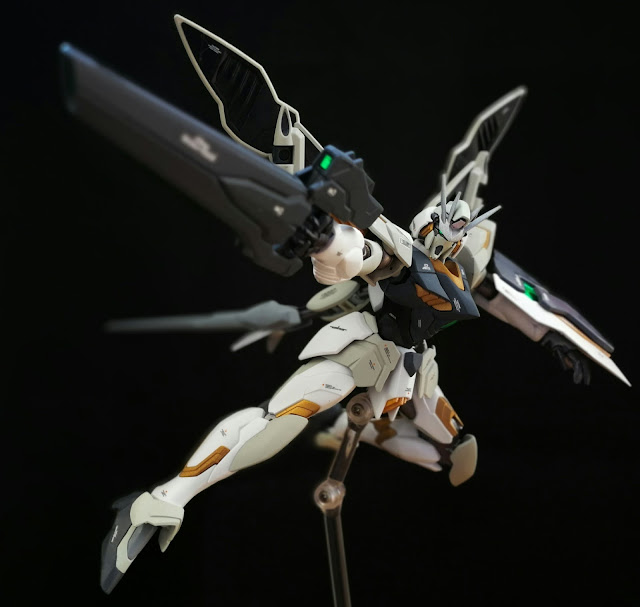 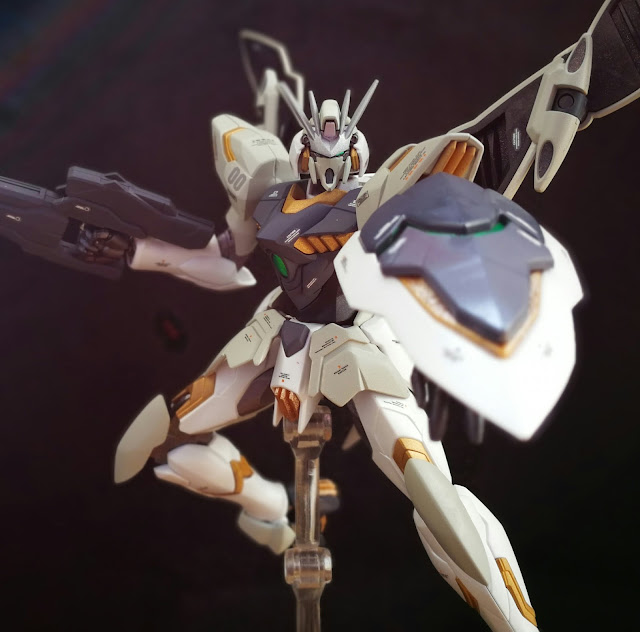 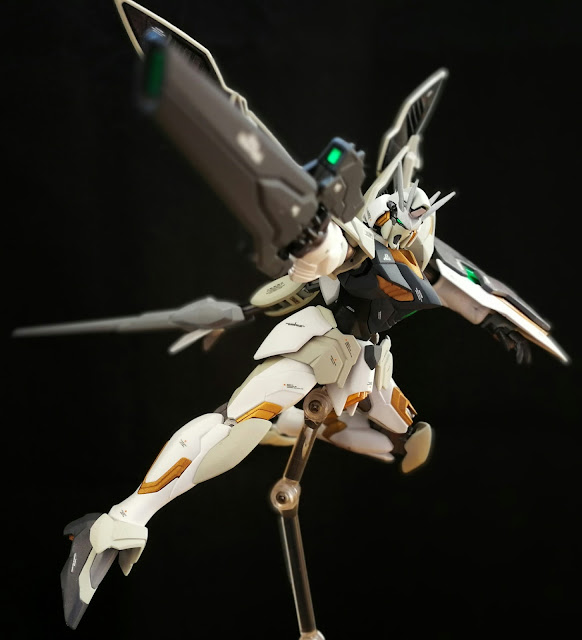 Posted by Gunplanerd at 6:38 PM