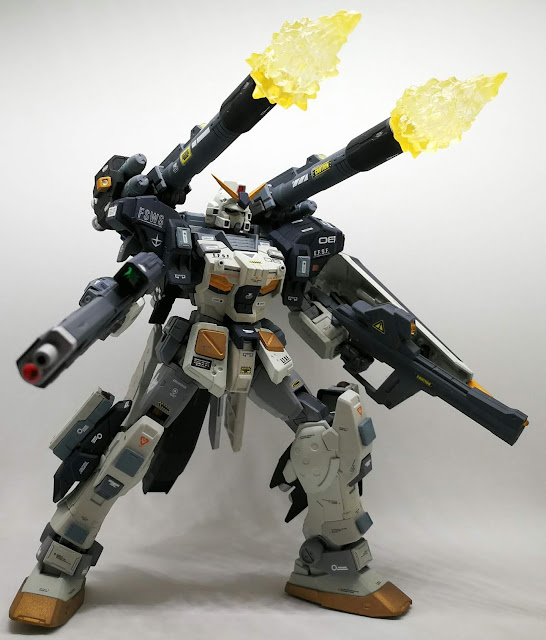 Since Bandai is taking its own sweet time to give us a HGUC 1/144 Gundam Mudrock (that has since changed), I decided to do one up myself, although I took certain liberties to the base design.

The RX-78-6 Gundam Unit 06 "Mudrock" has always been a source of fascination for as many reasons as the mobile suit's intense loadout: its more utilitarian colour scheme as compared to the primary-coloured RX-78-2, a fearsome weapons package in the form of twin backpack-mounted cannons as well as high mobility accorded by powerful thrusters mounted all over the mobile suit. Although it didn't survive the One Year War, the Mudrock's legend lived on and inspired mobile suit designs that channeled its overall style and theme.

The FA-78-06/2 was intended as the technical next-step to the RX-78-6, had its development been fully funded and followed through. Following the footsteps of the RX-78-2, the Full-Armor System & Weapon System (FSWS) was adapted for the Mudrock's frame, essentially modifying an already formidable mobile suit into a nigh-unstoppable moving wall of heavy firepower. 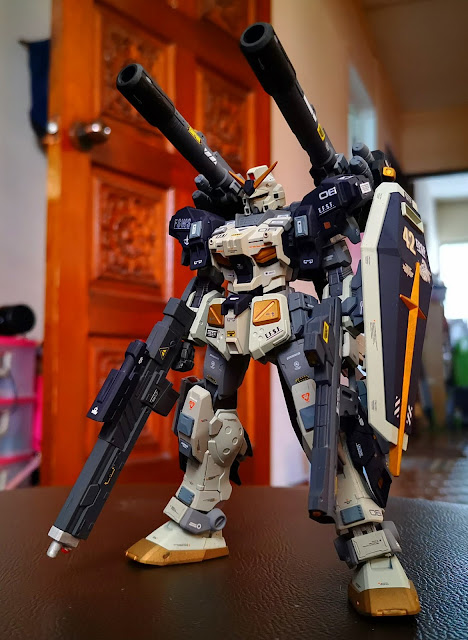 Build Notes
As I don't possess the skills and/or patience to scratch-build brand new components for the Heavy Mudrock, the challenge was sourcing for suitable parts from readily available model kits. It took a while to narrow the list down to a handful of model kits, but even then, those were not an exact match for the Mudrock's design, especially its backpack. So instead of creating a one-to-one copy, a Full Armor variant of the Mudrock was envisioned.

Parts from three kits were extracted for the Heavy Mudrock, all of them Universal Century mobile suits to preserve the design aesthetics of that era:
Essentially, the Heavy Mudrock's head, torso and waist units were from the Full Armor Gundam 7th, while the Pale Rider provided its limbs to the mobile suit. The Gundam Ground Type-S supplied its backpack and beam sabers. To add surface detail and further bring out the "Full Armour" theme of the Heavy Mudrock, suitably-sized armour pieces from the Bandai Builders Parts MS Panel 01 were painted and strategically cemented to key hit-boxes all over the Mudrock's frame, particularly on the leg units. A pair of modules from the Bandai Builders Parts MS Armour 01 were mounted into the calf thrusters to function as a missile-intercept package, similar to the Trophy active protection system found on modern-day main battle tanks.

The Mudrock-style backpack itself proved to be quite a challenge, with no existing model kit possessing a suitably bulky unit for use. The backpack needed sufficient bulk to look appropriate, while also ensuring that the cannons were not spaced too wide apart or too near each other and also ensuring adequate room for tracking and elevation. 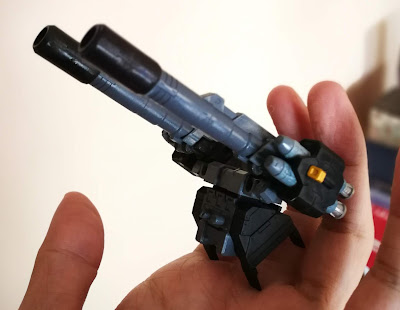 The backpack-mounted shock cannons themselves were made from a combination of the folding cannons and torpedo launchers from Bandai Builders Parts MS Cannon 01, with barrel extensions sourced from the HGBC 1/144 Spinning Blaster set. A pair of cannons from the HG 1/144 Customise Campaign 2016 Weapon Set H were added to the Heavy Mudrock's forearms but were later removed as they looked quite odd. The shield was sourced from a HGBF 1/144 GM/GM as it was one of the few shields able to hold beam saber handles on the inside. Plus, it looks edgy!

I played around with various handheld weapons for the Heavy Mudrock, with the intention to let it dual-wield weapons right from the get-go since it was a machine used to wage bloody war and not have pointless negotiations. Starting with the Full Armor Gundam 7th's own beam rifle, I tried on other weapons like the ZZII's Beam Launcher in handheld form from the HGBC 1/144 Eastern Weapons set as well as a Battle Rifle and a Vector-inspired submachine gun from a Kotobukiya MSG weapon set. In the end, I decided to go with the Battle Rifle and Beam Launcher, both weapons complementing well with each other as well as the rest of the Heavy Mudrock's fixed weaponry. 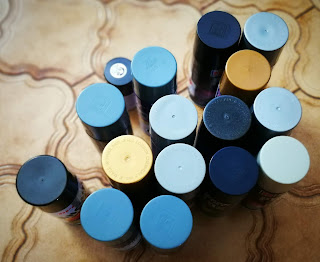 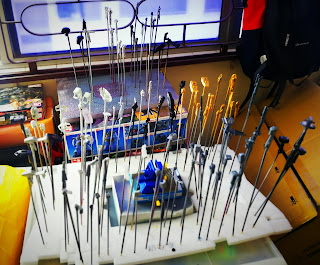 To somewhat recreate the Mudrock's colour scheme but with my own flair, the following colours from spray cans were used for the build:
Fictional Lore
The next step of the Mudrock's technical evolution, the FA-78-06/2 Full Armor Gundam Unit 06 "Heavy Mudrock" is designated to be an attack use mobile suit intended for siege warfare both in space and on terrestrial environments. While the Heavy Mudrock performed adequately in low-gravity theaters, it truly shone on solid ground. The various fixed armaments and additional armour plating allowed the Heavy Mudrock to take and also dish out a lot of punishment, complemented by the high agility and mobility accorded by its powerful thruster banks.

To discharge its intended role as a sustained attack combatant, the Heavy Mudrock is outfitted with a veritable arsenal of weapons:

The default intent of the Heavy Mudrock was to function as a literal wall against invading forces: the sole unit was supposed to single-handedly stem the tide of opposition with little to no backup. While the Heavy Mudrock carried a vast arsenal of both beam and solid weaponry, it was also given mobility enhancements to offset the weight from its armaments. In addition to a pair of powerful three-thruster banks on its backpack and the high-mobility modules mounted on its calves, a high mobility unit was also attached to the rear skirt armour like a tail stabiliser to give it improved hovering capabilities in gravity while also functioning as a booster in space. The same high mobility unit is also found on the Full Armor Gundam 7th, becoming a cornerstone of any modern FSWS package.

First deployed on the steppes of old Mongolia to defend a Federation Mobile Suit Research & Development Facility against a massive Zeonic invasion force in the closing days of the One Year War, the Heavy Mudrock was quite literally the last mech standing, the facility's small garrison of GMs and GM Ground Types having being wiped out by the numerically superior Zeon army staffed with hardened veterans from the war who were eager to exact revenge on the Feds. While the Heavy Mudrock was intended to be sent to A Baoa Qu to aid Federation forces in Operation Star One, it was urgently repurposed to defend its home base instead. Piloted by the mechanic who oversaw its construction, the Heavy Mudrock's Learning Computer tapped on the collective combat experience from all of the Federation's mobile suits, including the legendary RX-78-2. Distilling the best tactics and stratagems for ground warfare, the Learning Computer programmed all of the Mudrock's heavy lifting: all the pilot needed to do was  pull the trigger.

Launched into battle just as the last GM took a smattering of 100mm machine gun rounds to the cockpit, the Heavy Mudrock started the Federation counterattack with an opening salvo from the 360mm shock cannons, instantly obliterating the Dolos-class land battleship that was marshaling the Zeonic invasion force. Making use of its powerful thrusters to hover above the ground, the Heavy Mudrock sidestepped a fusillade of Zaku machine gun fire, catching some on its spiked shield before letting loose all four of its 240mm anti-armour torpedoes. The projectiles snaked from their launchers and found their targets, tearing apart Magella Attack tanks, Zakus and a couple of Goufs.

Jettisoning the spent launchers, the Heavy Mudrock took advantage of the chaos that reigned from its torpedo bombardment to move into range of another Dolos-class land battleship. Leveling its experimental Kinetic Battle Rifle at the bridge of the massive warship, the pilot fired a three-round burst of depleted uranium projectiles that splintered on impact, completely decimating the bridge and crew of the Dolos-class. A single blast to the ship's reactor from the heavy beam launcher was enough to gut the vessel once and for all.

As the Mudrock engaged its hover thrusters to move to the next target zone, the whine of a trio of Zeonic missiles cut through the cacophony of the battlefield. Without the mobile suit breaking stride, the active defense systems on the calves of the Mudrock activated, sending darts of steel soaring through the air with pinpoint accuracy. Three darts were launched and three Zeonic missiles turned into mini-fireballs long before they even reached their intended target.

A squad of Zaku IIs led by a commander type suddenly burst through the smoking wreckage of the dead Dolos-class carrier and engaged the Heavy Mudrock, damaging its battle rifle. Activating its forearm weapons, the Federation mobile suit blitzed the Zeon combat team with a combination of heavy beam and pulse beam blasts, eliminating two of the grunt Zaku IIs and disarming their commander. With no charge left in the forearm weapons, the Heavy Mudrock disengaged the armaments from the mobile suit's frame and reached into its shield and produced a single beam saber. The commander type Zaku II saw this and activated its own heat hawk, the orange blade blazing fury. Even in regular close combat, the heat hawk could barely parry a beam saber's blade, let alone the unorthodox way that the Heavy Mudrock used its single beam saber. 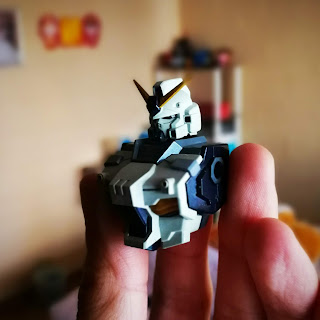 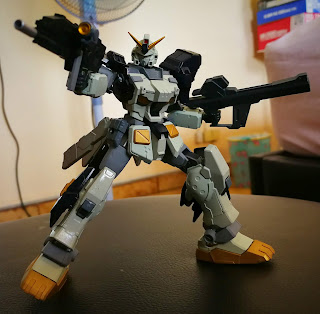 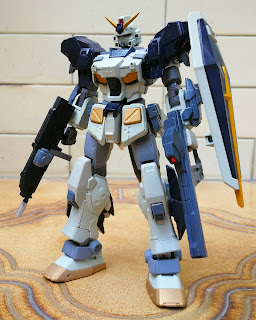 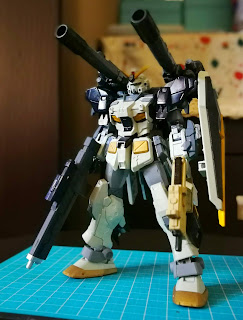 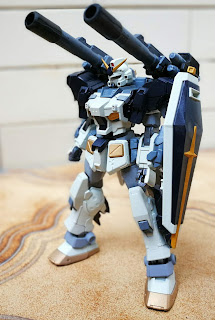 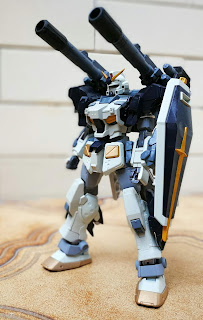 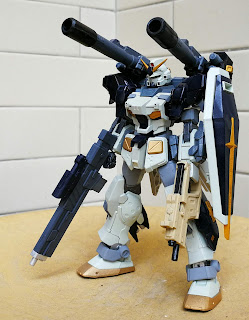 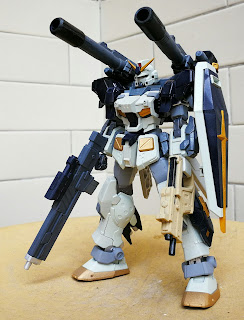 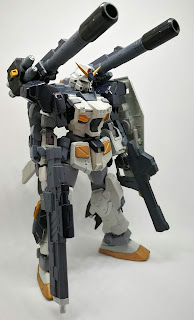 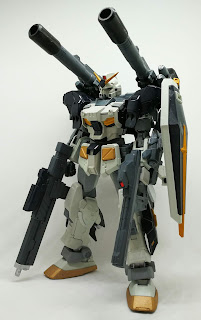 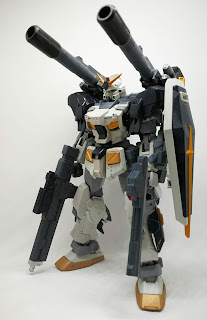 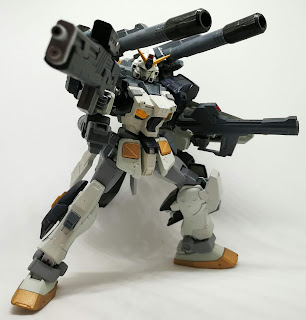 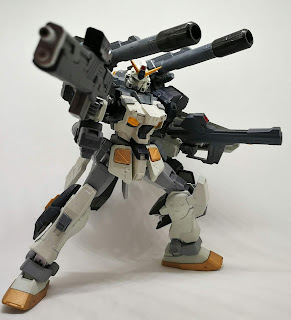 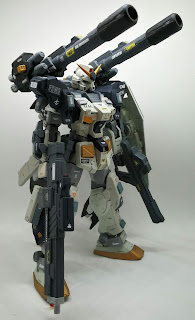 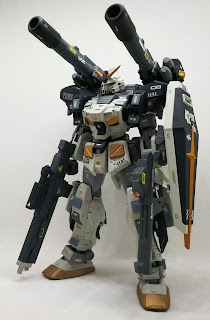 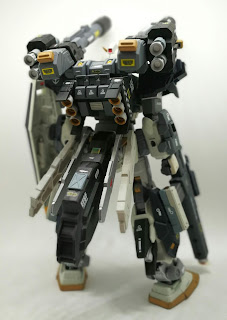 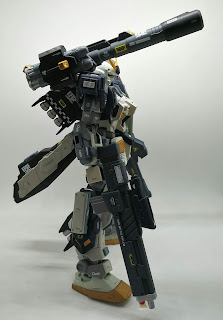 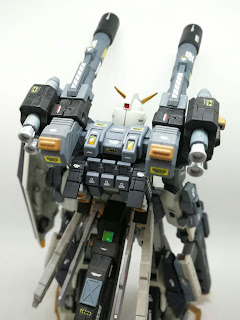 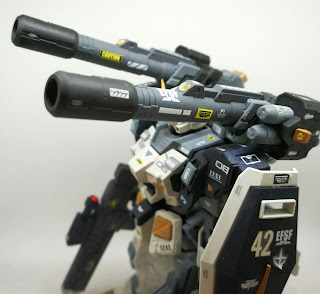 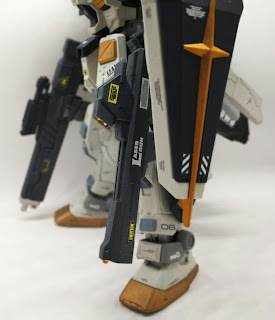 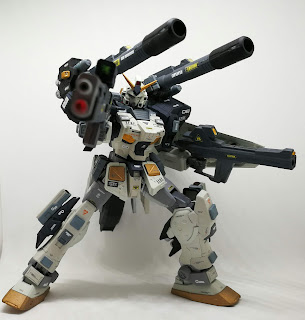 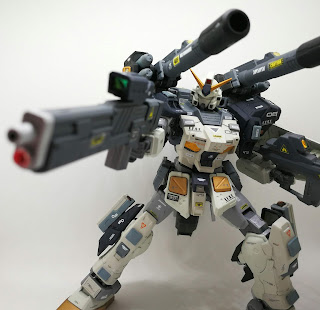 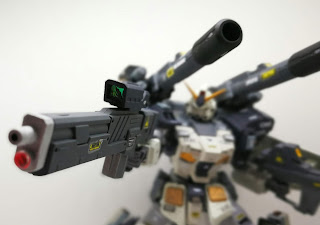 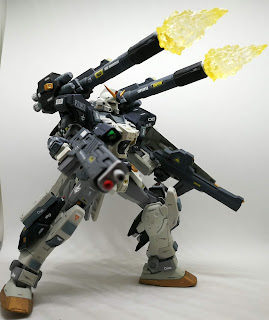 Posted by Gunplanerd at 7:33 PM