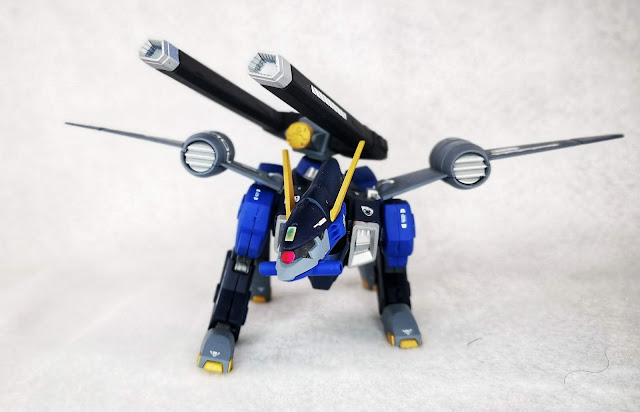 While the Mobile Bucue canonically belongs to the Gundam Seed universe, it is not that far-fetched to reimagine it in the Universal Century. In the real world, Boston Dynamics' Spot robot dog has proven to be a very viable application of artificial intelligence and robotics, and the Mobile Bucue represents a possible future application of quadruped robot technology that may occur.

Fictional Lore
With its mobile suit corps firmly established in the final leg of the One Year War, the Federation worked tirelessly in the post-war era to further improve its mobile suit technology as well as its combat doctrine. Mobile suits now worked with other mobile suits, very rarely requiring the assistance of other combat assets such as infantry, main battle tanks and fighter aircraft. As such, conventional weapons systems were quickly being phased out, superseded by brand spanking new mobile suits and their ancillary technologies. There was no point developing a new tank destroyer if a towering mobile suit could simply step on it to end its existence.

Even after the conclusion of the One Year War, Zeonic Remnants fought an increasingly lethal guerrilla insurgency against the Federation across many colonies, especially the ones on the fringes of EFSF-controlled space. Although the Federal Police Force assigned to keep the peace were largely successful in keeping Zeonic forces at bay, they still faced difficulty tackling the enemy's irregular style of combat. At times, Zeonic Remnants fielded retrofitted MS-09 Dom units outfitted with heavy weapons such as the large-caliber secondary guns of sunken land battleships, giving the Federal Police Force a lot to chew.

While ostensibly a peacekeeping force deployed to alleviate the strain on the EFSF's main force, the Federal Police Force was in fact a cover for the field testing and live data collection of off-the-books experimental combat systems. Due to the potential public backlash the EFSF might face if weapons development was shown to be still persisting in times of peace, such covert measures were required to properly assess and evaluate new-generation weapon systems for an inevitable eventuality.

The Federal Police Force maintained a stable of modified RGM-79G[FP] GM Command units, along with more unconventional weapon systems such as the RX-80/L Gundam Type-L and a squad of its associated RGD-79FP Type-79 Autonomous Combat Drones. Versions of the Federal Police Force active in the later years of the first Universal Century had access to even heavier weaponry, such as the RGM-89D-ESC/FP Jegan Type-D (Federal Police Tactical Unit) and the formidable FD-03/FP-SWAT Gustav Karl (Special Weapons And Tactics).

A shady branch of the EFSF's research team, working with an equally shady division of Anaheim Electronics, regularly sent new weapons to the Federal Police Force, and one of these was the RMS-809K prototype self-propelled combat support gun platform, codenamed "Bulldog".

The Bulldog was non-traditional, to say the least. Not sporting the well-established bipedal mobile suit design universally adopted by both the Federation and Zeon, the fire support unit bore an unfamiliar quadrupedal visage resembling its namesake. Although different and unconventional, a quadruped design provided for supreme stability and allowed the Bulldog to mount heavier weaponry to fulfill its combat support role, and could traverse rough terrain inaccessible to bipedal mobile suits. Tank threads incorporated into the Bulldog's "limbs" further improved its all-terrain prowess, with a so-called tank mode giving the mobile suit a drastic speed boost when needed.

A distinctly Zeonic monoeye sensor mounted on the head of the mobile suit was the Bulldog's primary optical and target acquisition system. While monoeye sensors were used in Federation mobile suit designs such as the GM Command and GM Sniper II, they were usually shielded behind a compound visor and not used as is. The Bulldog's prehensile neck unit allowed for a wide range of motion to help track enemy targets.

As a combat support gun platform, the Bulldog was meant to be integrated and deployed with mobile suit teams, providing heavy fire support from either the front or the rear of the formation. Designed with the intention to give field commanders more tactical options to tackle an ever-expanding plethora of threats, mobile suit squad leaders could utilise the gun platform in various ways depending on the loadout.

The standard equipment for the Bulldog was an experimental 420mm twin fire-linked rail cannon, contained in a turret capable of full 360 degree traverse mounted on the rear section of the mobile suit. These fearsome weapons could tear through enemy armour at fantastic ranges and were most suited for busting bunkers or other hardened positions. The lengthy recharge times for the capacitors to be fully operational in between shots necessitated evasive tactics.

The rail cannons can be substituted for 240mm anti-aircraft cannons for anti-air or anti-missile operations. These cannons could also function as Close In Weapon Systems (CIWS) for escort or protection missions and a single round was enough to utterly destroy a Dopp-class single-ship fighter.

For bombardment or siege missions, a 13-tube missile rack capable of delivering any kind of payload was equipped on the Bulldog to lay down heavy firepower over a wide area. The Bulldog also had access to a long-range 280mm rapid-fire howitzer with a co-axial 100mm heavy machine gun, linked to a large radome for extremely precise artillery bombardment.

The Bulldog's quadruped design allowed for highly stable firing of any of its equipment with almost no recoil, and it could even run and gun - in both regular and tank modes - without any noticeable loss in speed. The mobile suit's specialised AI took care of most of the heavy lifting, and the Bulldog pilot drove the suit as though it was a RGM-79 GM, albeit with more bells and whistles.

The Bulldog's only drawback was its lack of any other offensive weapons, save for a pair of beam sabers mounted at the "mouth" area of the mobile suit to fend off close-range attackers. The Bulldog relied on the rest of the mobile suit squad it was attached to for protection, and in return, it provided the squad with the necessary means to punch through stubborn Zeon defences. 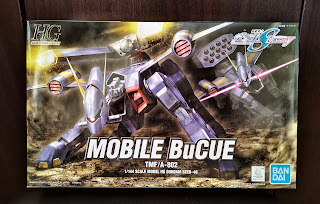 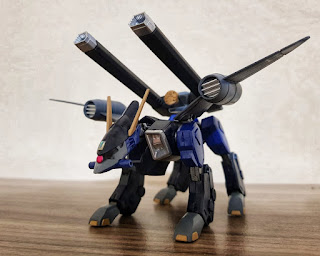 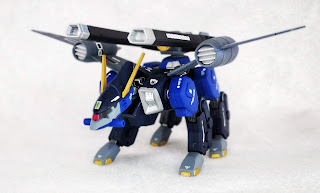 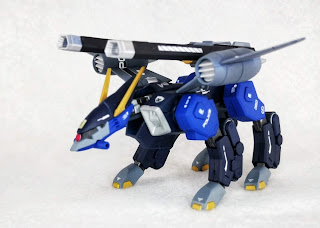 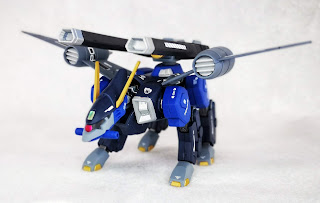 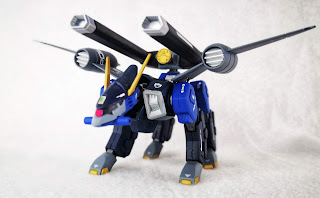 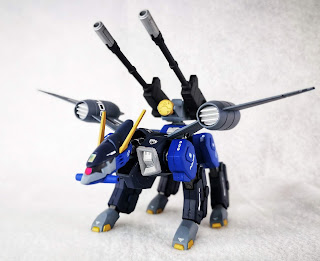 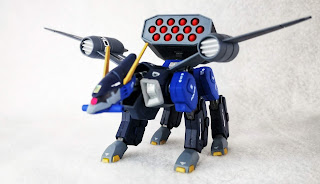 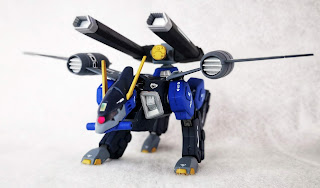 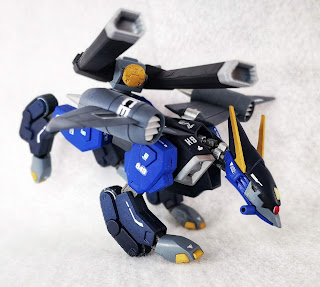 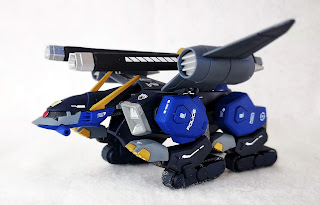 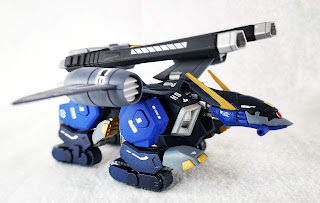 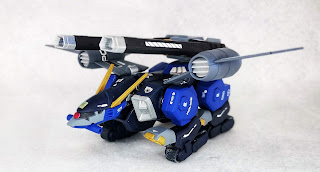 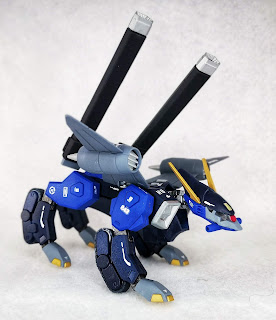 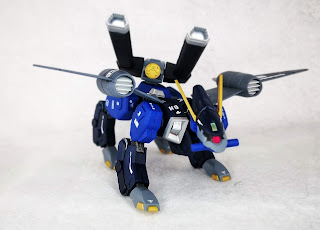 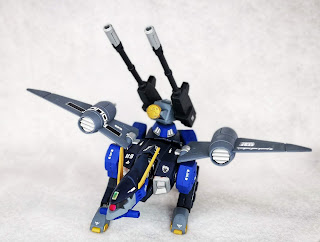 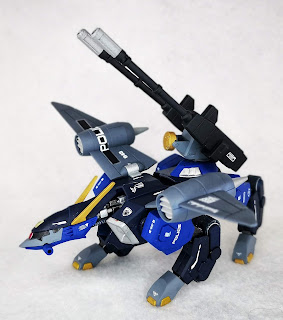 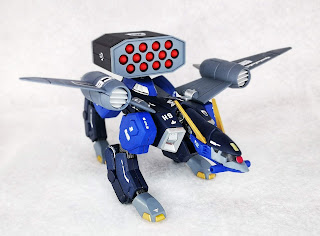 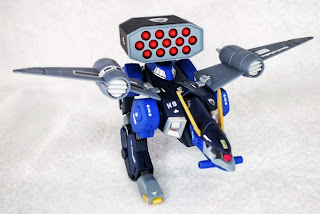 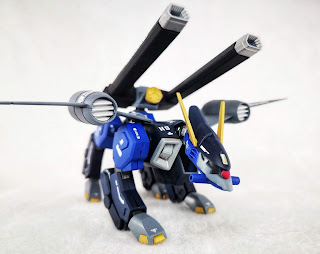 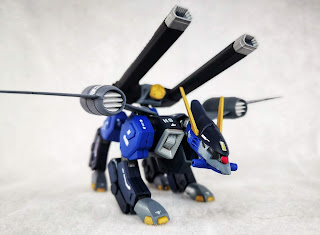 Posted by Gunplanerd at 7:05 PM