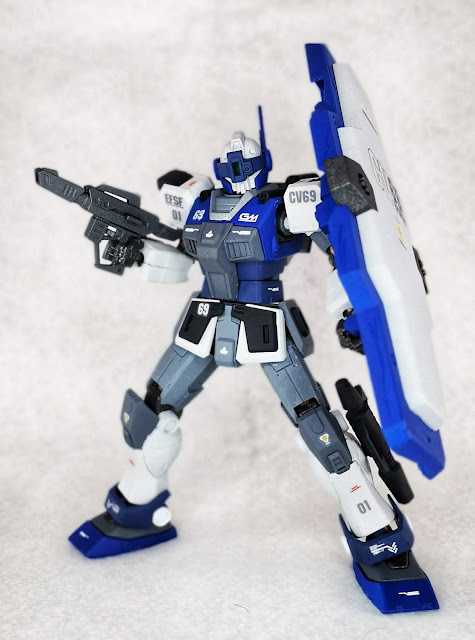 Amounting to a field upgrade of the RGM-79HC GM Guard Custom and RGM-79HC[T] GM Guard Trooper mobile suits, the RGM-79HC/2 is reserved for the exclusive use of combat veterans of the One Year War. Recalled from the frontlines to train new batches of Mobile Suit pilots for the Federation war machine, combat veterans were issued these upgraded GM Guard Customs to help defend their assigned bases in the event of an attack.

While cosmetically similar to the regular GM Guard Custom in active use, the HC/2 model features quite a number of improvements and modifications over its stock predecessor. Along with the newfangled E-2 Beam Spray Guns, HC/2 units had a new torso block with reinforced cockpit, twin machine guns situated on the clavicle fed by ammo drums mounted on a new style backpack, enlarged shoulder apogee motors for finer AMBAC control, slightly different front skirt armour as well as modified side skirts to holster the E2 beam spray guns. These seemingly insignificant modifications actually resulted in greatly improved performance for the GM Guard Custom.

Despite the EFSF's vast coffers, the highly-damaging war with the Principality of Zeon had taken a huge toll on Federation supply chains. This meant that mobile suit spare parts and replacement components were prioritised for the frontlines and not the training academies, even if these facilities were under constant attack by Zeonic forces in a bid to cripple the Federation's supply of pilots for its growing GM corps. As such, GM Guard Customs usually stuck with their Guardian Shields throughout entire deployments and tours of duty, using the same shield to weather all manner of enemy weaponry from 100mm machine gun rounds to 360mm shaped charges fired from giant bazookas. The sheer size of the Guardian shield also meant that considerable resources had to be expended to make new shields, resources that could have been spent making chest armour plating for at least 6 standard-issue RGM-79 units.

Thus, it was not surprising to see GM Guard Custom units launching into battle with damaged shields. While the frontmost section of the shield and the twin fire-linked machine gun module could be replaced given enough time, the rearmost section of the shield basically stayed with the pilot forever. Shields bearing both damaged and brand new components were not uncommon, which soon became a testament to the high defensive capability of the Guardian Shield system.

Combat veterans and new recruits alike highly regarded the upgraded GM Guard Customs, especially when the units were doing battle. The E-2 beam spray gun produced a narrower beam than the regular beam spray gun, resulting in greater range and hence lethality. Although the standard beam spray gun was still absolutely deadly at close range due to the widespread output of its beam that was akin to a shotgun blast, the advantage quickly became inconsequential as Federation pilots quickly found out that a single beam shot could penetrate Zeonic armour at virtually any range.

Some combat veterans wielded two E-2s in combat, along with the standard beam spray gun holstered to the left leg for contingencies. The new built-in weapon systems on the upgraded GM Guard Customs allowed the mobile suits to engage a greater range of enemy targets without having to call in other combat assets to neutralise the threat and also allowed them to save precious beam shots for worthier targets. GM pilots would at times entrench their Guardian Shields into the ground to serve as stationary defensive structures, using the large surfaces as cover which was particularly useful in open battlefields. With a combination of beams and solid projectiles, combat veterans and their GM Guard Customs were able to successfully fend off encroaching Zeonic forces bent on nipping the Federation's fledging mobile suit forces in the bud. 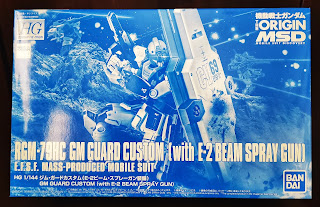 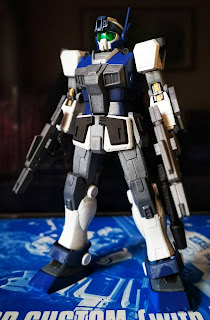 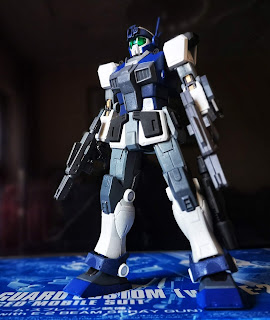 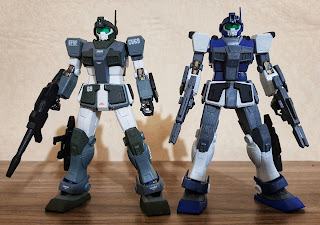 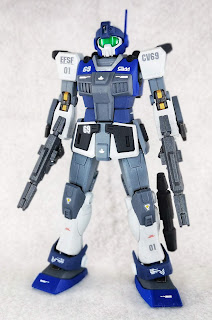 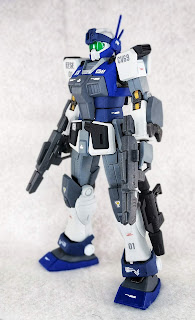 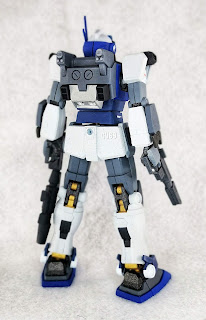 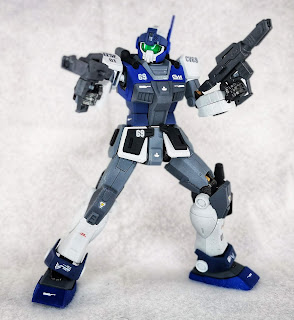 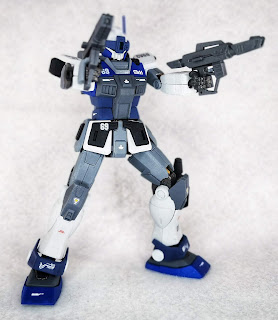 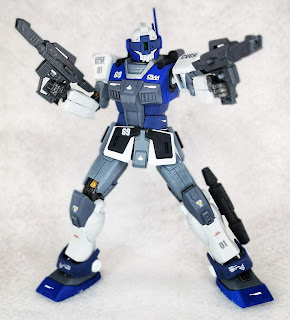 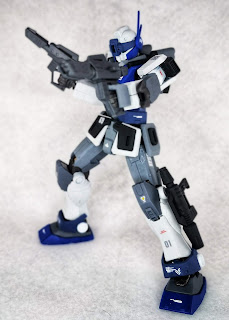 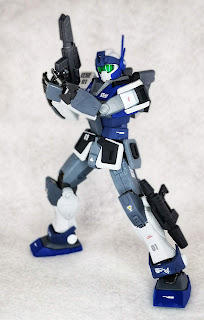 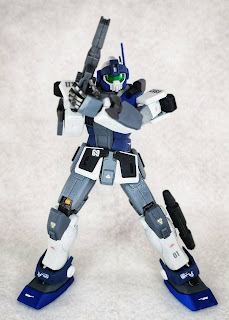 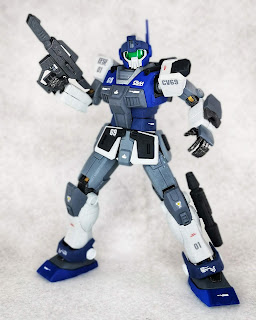 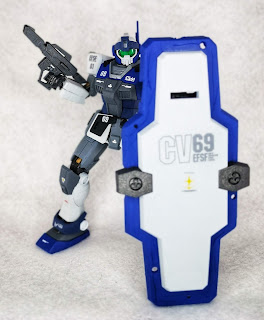 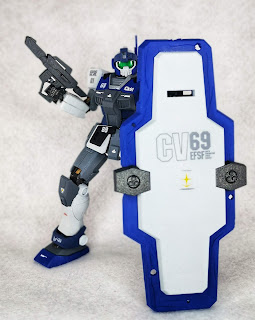 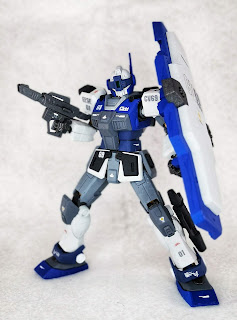 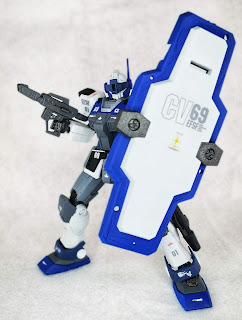 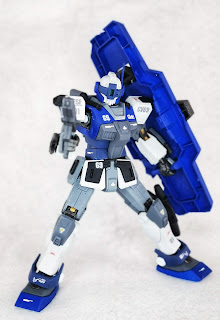 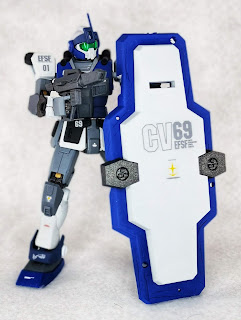 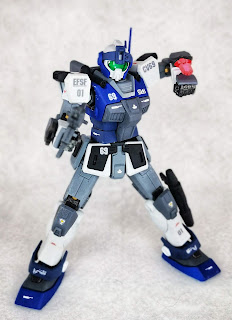 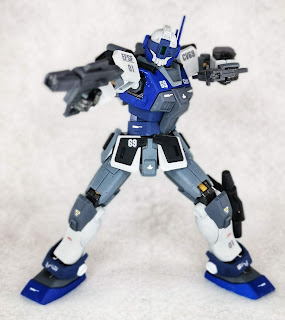 Posted by Gunplanerd at 6:34 PM