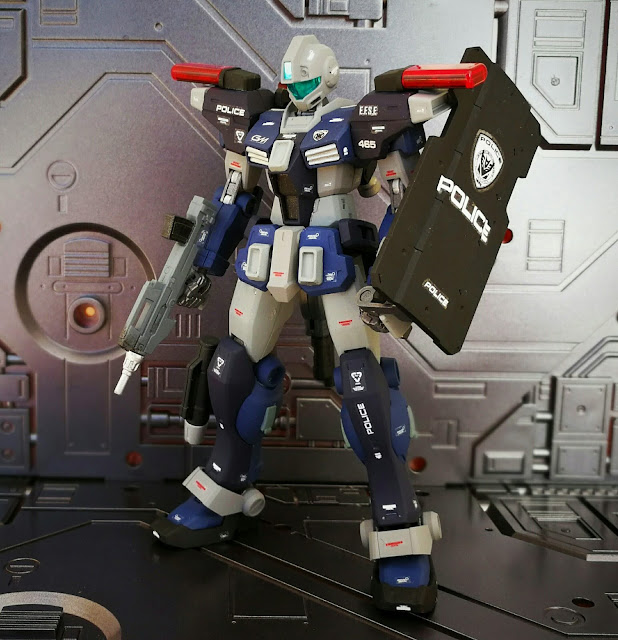 As the workhorse of the Federation, the GM frame can be adapted for a variety of different uses and functions. For the colonies far from the immediate reach of the Federation's military might, the GM Command (Federal Police Model) is the first line of defense against rebels, insurgents and the occasional Neo Zeon incursion.
Once the RGM-79 GM mobile suit frame rolled off the assembly lines of Jaburo, it became the backbone of Federation mass production mobile suit development, spawning dozens of variants, customs and derivatives. Apart from the ostensible military applications, the GM frame was also exported to outlying Federation territories as a peacekeeping force, especially to areas where the full brunt of the Federation’s military cannot be swiftly brought to bear. This resulted in a variation of the GM frame specifically tasked to maintain law and order while simultaneously serving as a last-resort tactic to delay hostile intruders. While not permitted to carry beam weaponry, the RGM-79G[FP] GM Command (Federal Police Model) is still equipped with an assortment of impressive armaments mostly derived from technology of the ongoing One Year War.

Drawing inspiration from Patlabor and other police-themed robots, the GM Command (Federal Police Model) is meant to be a peacekeeping force operated by Federation forces on worlds faraway from the immediate Earth sphere of influence. As seen in Gundam The Origin, these pseudo-military garrisons maintain a battalion of troops with a small stable of mobile suits, most notably Guntanks, to quell any civilian uprisings or rogue mobile suit incursions. Essentially a RGM-79G GM Command with limiters in place to suppress its performance, the Federal Police Model is nevertheless an impressive piece of hardware that is more than able to hold its own against older mobile suits such as the Zaku II.

As befitting of its police status, the GM Command (Federal Police Model) features a pair of red lightbars with integrated sirens on its shoulder armour. A single magnetic beacon is affixed to its backpack to be used in conjunction with the lightbars in times of emergency. Even without the activation of the lights, the mere presence of the GM Command is enough to drive off the casual dissenter and insurgent, but hardened Zeon veterans will be more than willing to rise up to this challenge.

Developed for riot control and crowd suppression in mind, the GM Command (Federal Police Model) is surprisingly well-armed, equipped with a standard issue mid-range battle rifle, a shield with a taser baton, a shotgun for short-range work and fighting in tight urban confines as well as a very low-yield beam spray gun as a final resort weapon that is only able to fire four shots before requiring a recharge. This is actually a built-in failsafe to minimise damage to the colony from beam weapon misfires as these can be potentially catastrophic.

Due to the nature of its weapons, pilots operating the GM Command (Federal Police Model) need to be particularly skilled in their maneuvering as it is usually the difference between life and death. GM Commands sometimes work in fireteams of three to take up opposing forces, with one or two of them providing suppressing fire with the battle rifles while the last one moves into position to knock out targets with well-places shotgun rounds. Rather than destroying enemy mobile suits outright, pilots are trained to deliver less-lethal blows to critical sections of a mobile suit frame, disabling the enemy for capture. A Minovsky reactor on meltdown will cause significant trouble for the surrounding environment as well as to the colony's structure. This is also why the GM Command is equipped with a taser baton as compared to a beam saber. 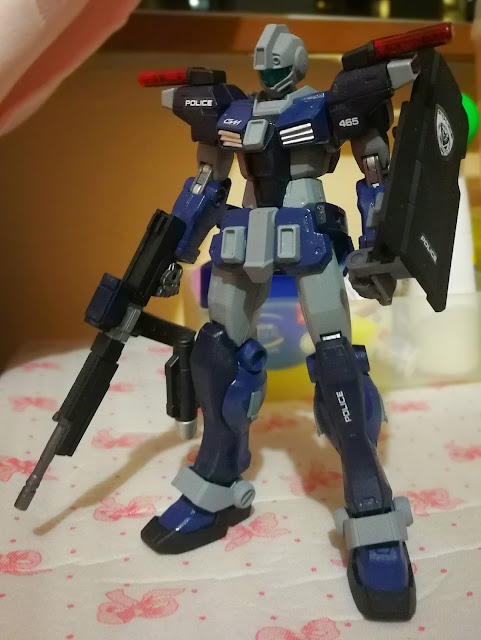 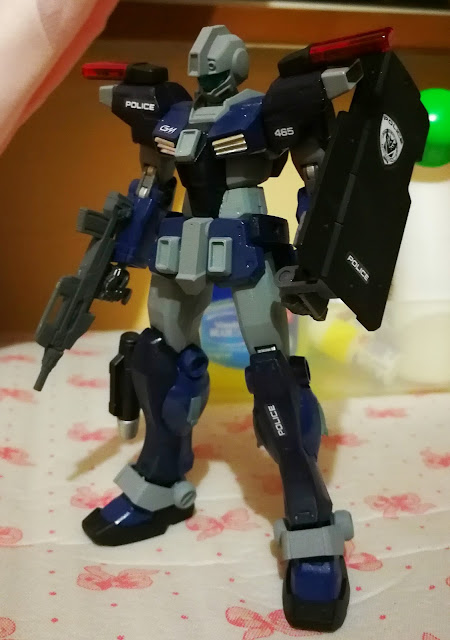 However, subsequent test-fitting showed that the MW40 Multi Caliber-derived battle rifle was a little too large for the GM Command, which was supposed to use a one-handed weapon concurrently with the ballistic shield. The large battle rifle seems too unwieldy to be operated with one hand, mechanical or not. Therefore, the battle rifle was switched for a bullpup machine gun taken from the HG 1/144 Guncannon First Type, which actually fits the GM Command's look much better.

The embellishments on the GM Command's shoulders, chest and front skirt armour are all spare, unused parts from the GM/GM set, being leftover parts from the HGBF 1 Runner (specifically from the HGBF 1/144 Gundam Leopard Da Vinci). They fit really well with the GM/GM design and do not require much work to use them; you simply paint and affix them to where you want the parts to go with a drop of super glue. Only the shoulders required some drilling to accommodate the red lightbars.

I decided to go with the GM Command head option as the Federal Police Model is put into use after the conclusion of the One Year War. The GM Command head is also a tad more suited for this role as compared to the regular GM head or the G-Dome one. However, I shaved off the little chin part so now it looks a little like the head of a GM Cold District Type.

The MW41 Ballistic Shield set contains the "police" parts and also comes with a couple of equipment storage units that are able to hold weapons from other brands. This is fantastic as I love me some weapon storage and I also needed a way to attach the beam spray gun to the GM Command's leg. Another weapon storage unit was added to the backpack to hold the shotgun, made easy by the awesome, versatile design of the GM/GM kit and its numerous hardpoints.

The third party POLICE waterslides decals work amazingly well, albeit a little too fragile for my rough handling. I never liked using waterslide decals even if I acknowledge their merits. For this build however, they are a necessity and I'm glad that the colour scheme fits the overall police theme, further accentuated by the waterslides. A 'GM' decal was also added to the chest unit to signal its lineage. 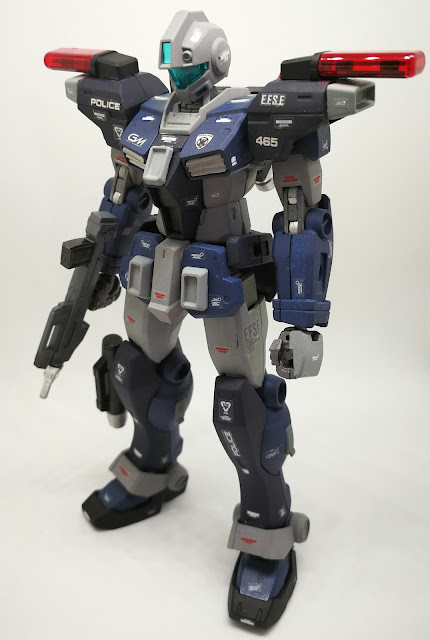 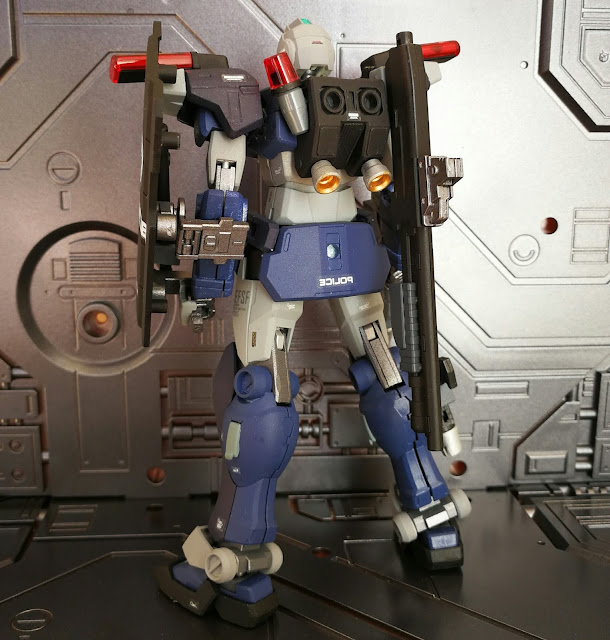 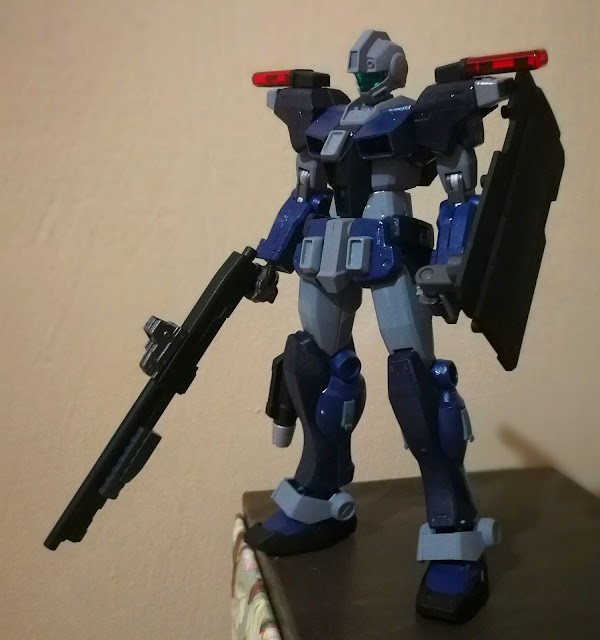 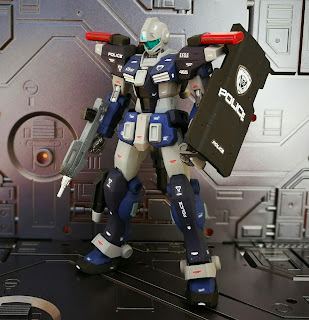 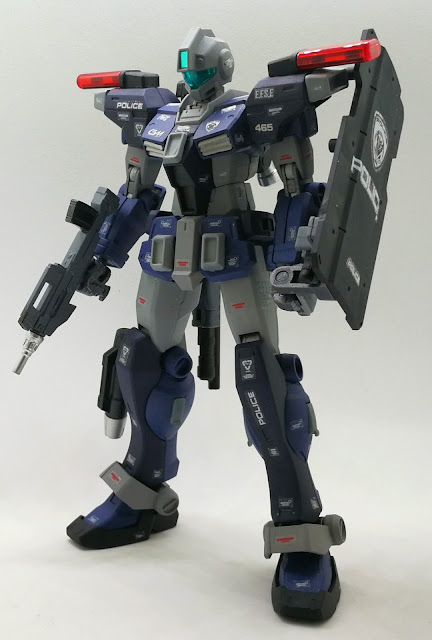 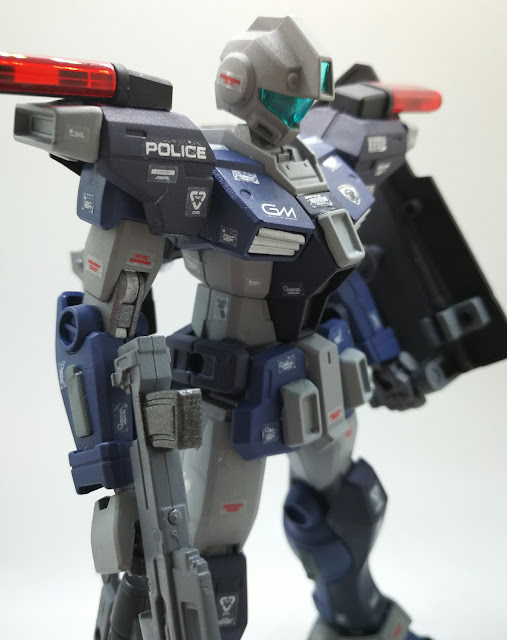 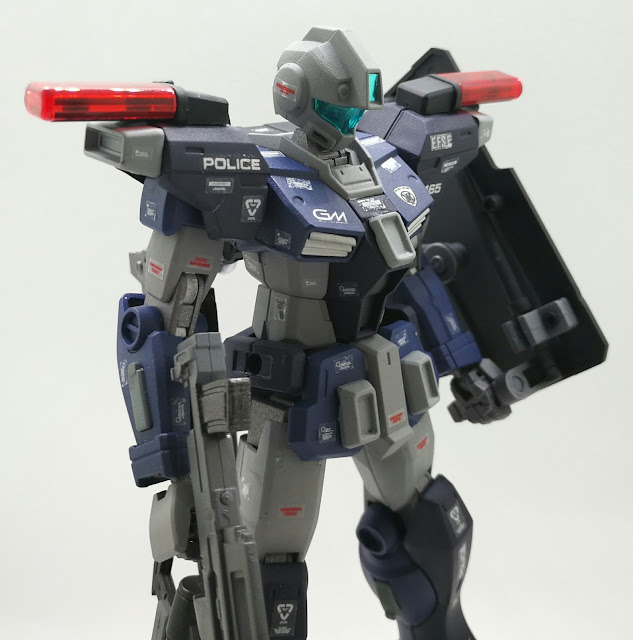 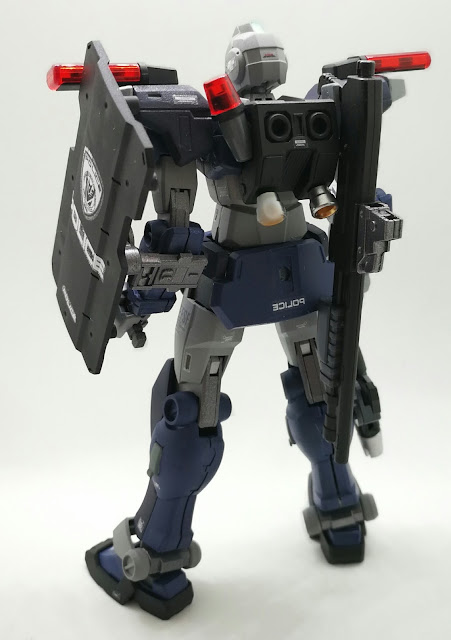 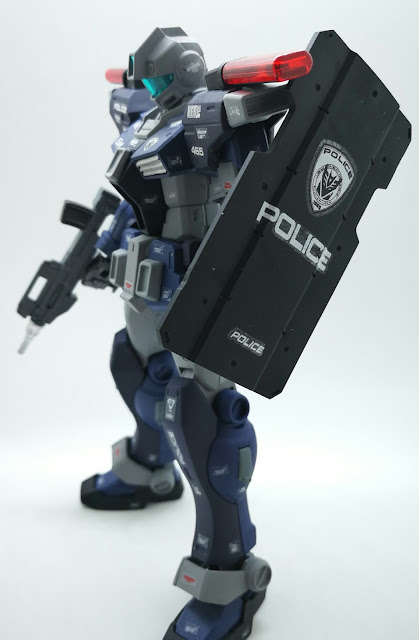 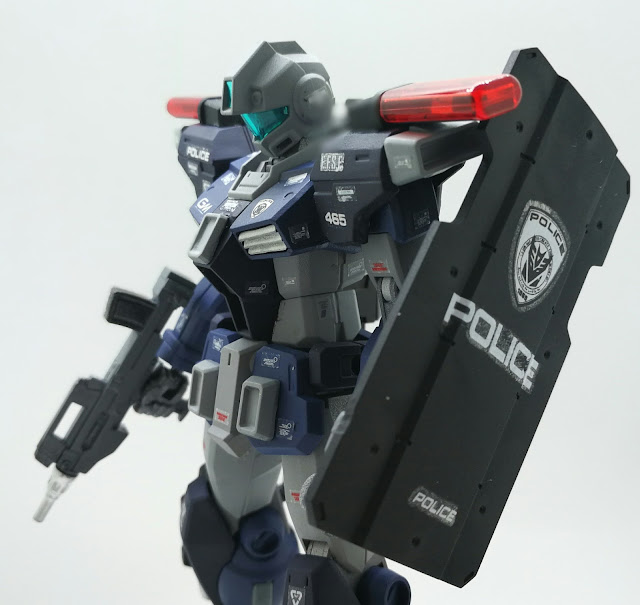 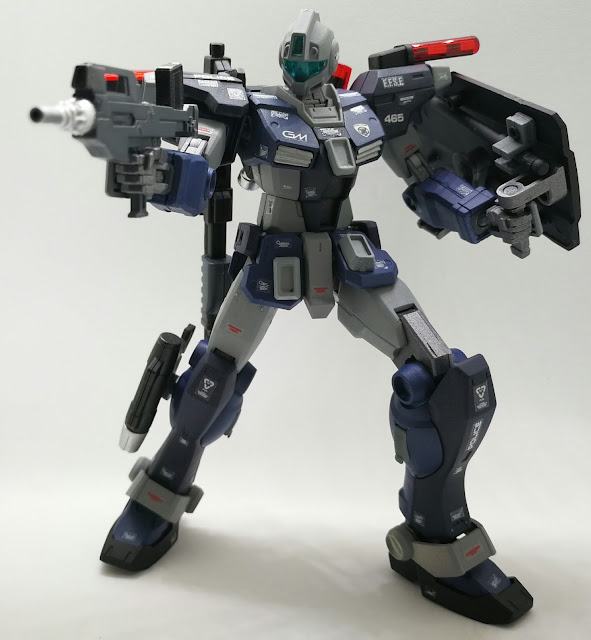 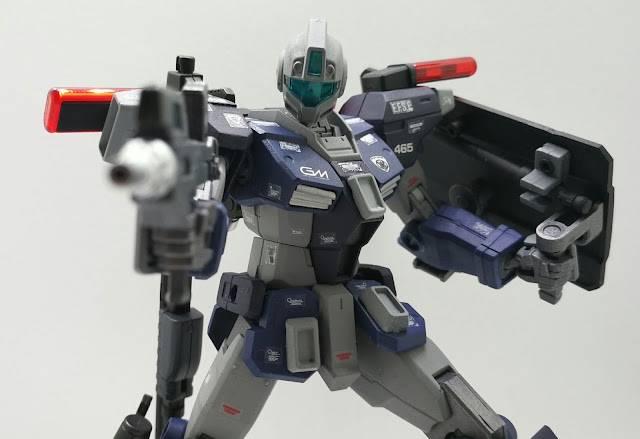 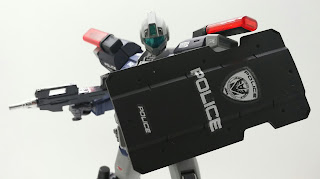 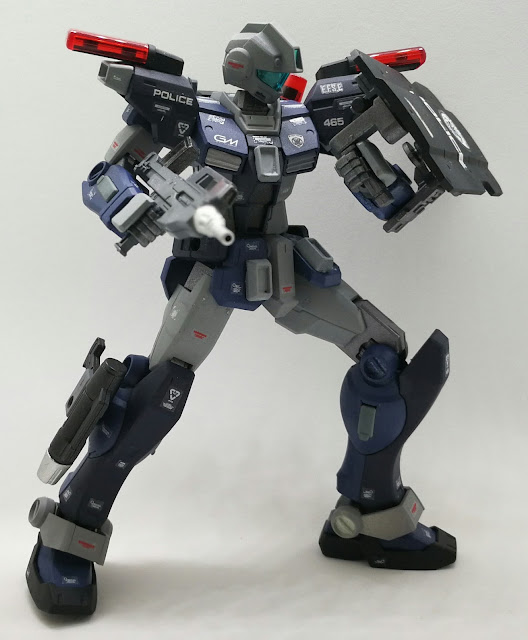 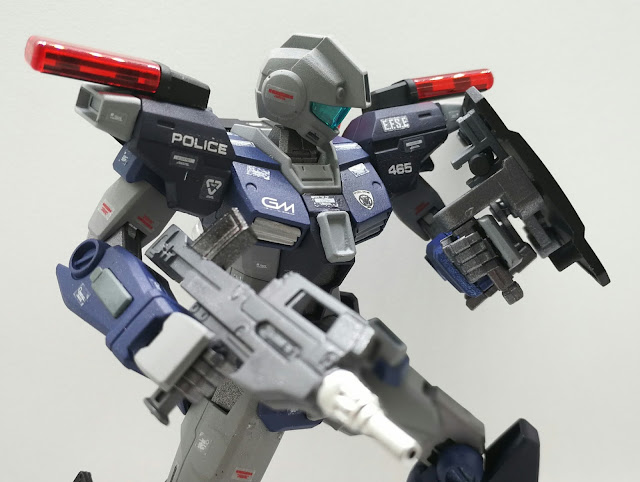 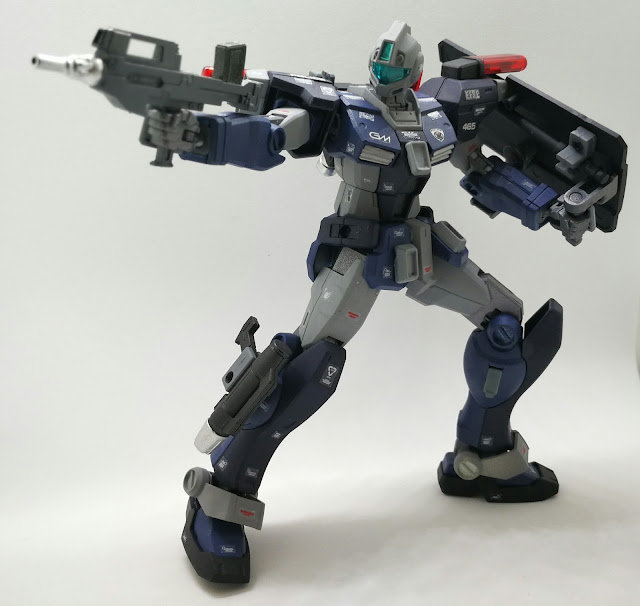 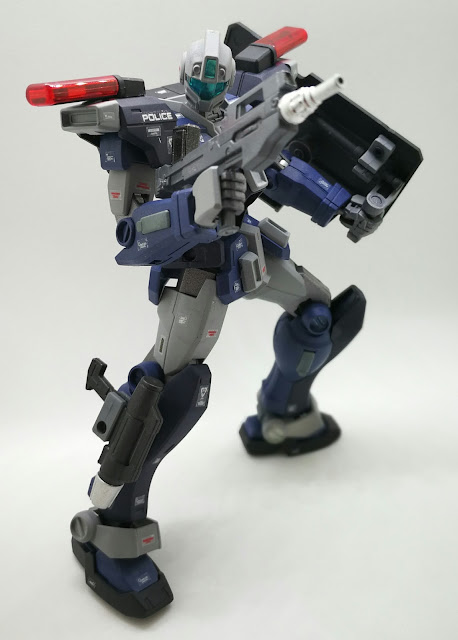 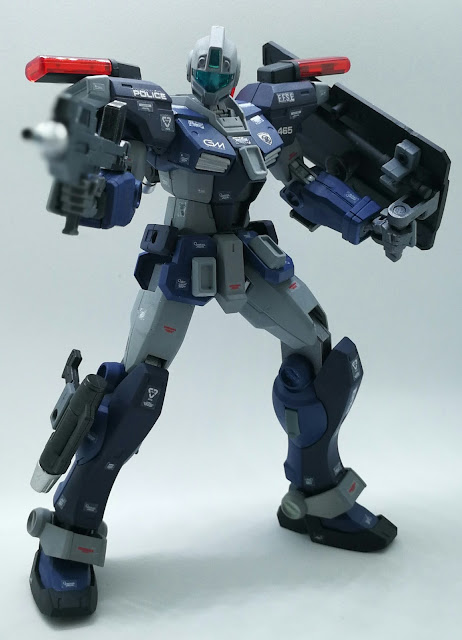 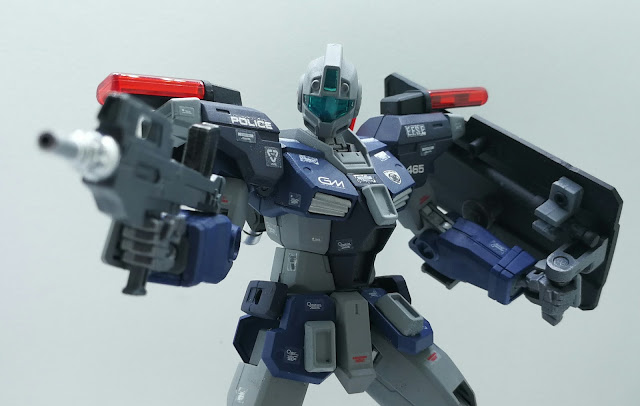 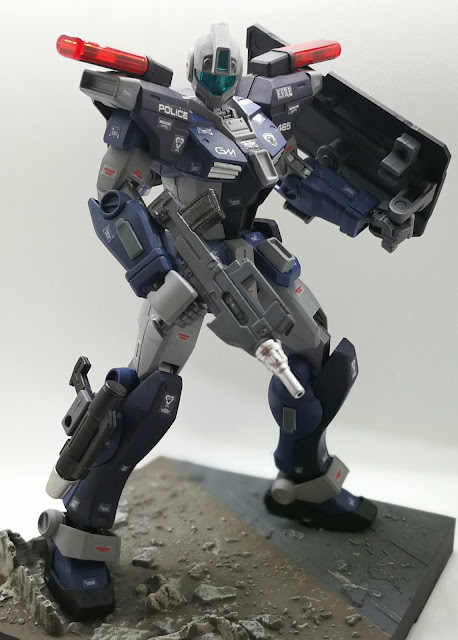 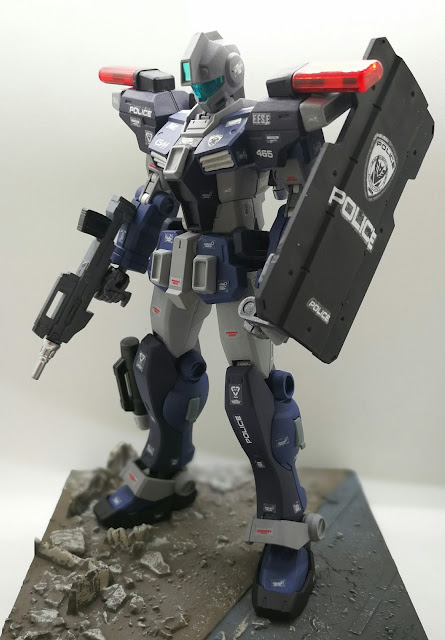 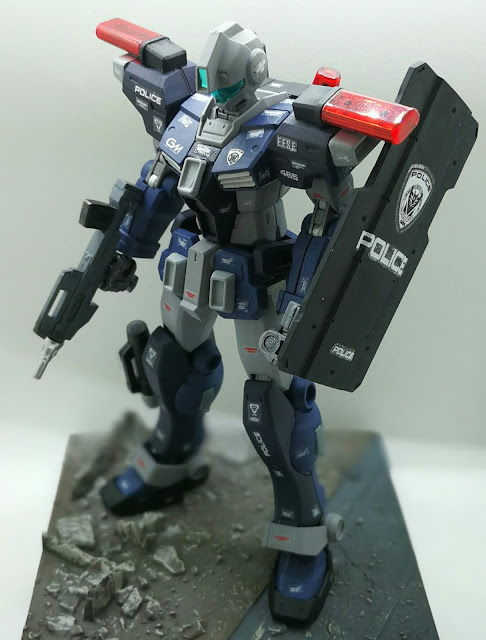 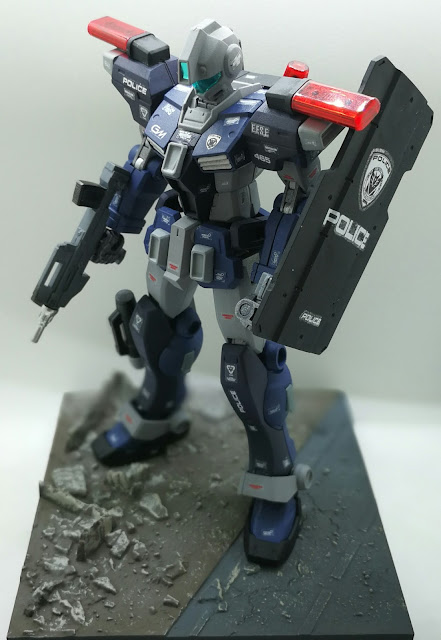 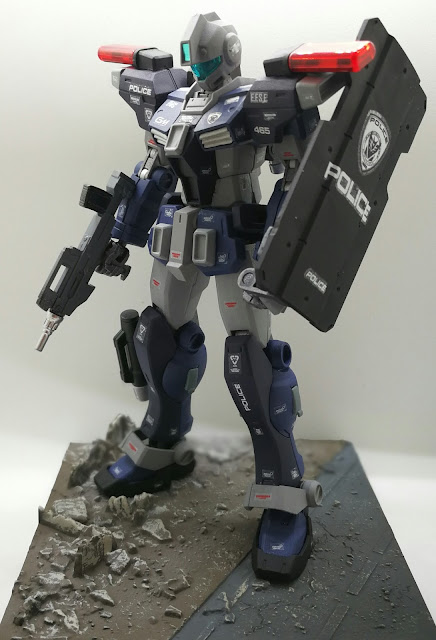 Posted by Gunplanerd at 9:08 PM