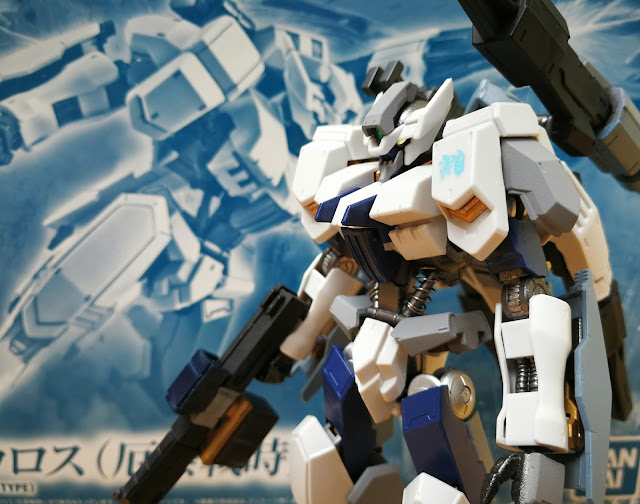 In the chaos of the Calamity War, a White Devil blasts a path to peace.
The HGIBO 1/144 series of model kits has to be one of my favourites to work on, given the fact that I have worked on so many over the past two years. For a lazy, casual builder like me, HGIBO model kits are a godsend with their fantastic part separation, great articulation, seamless inter-kit compatibility and numerous Option Sets. It is just a joy to put these things together, painted or otherwise.

This P-Bandai HGIBO 1/144 Gundam Flauros marks my 50th Build for the year 2017 and is also my second Painted Build of the Gundam Flauros. As the first one (review here) was essentially an upgraded version of the Flauros after being excavated by Tekkadan, it featured a more militaristic colour scheme along with substantial changes to its armour and armament. Around the time of that Build's completion, Bandai announced the Flauros in its Calamity War colours as a P-Bandai Exclusive. As I was pretty much smitten with that colour scheme, I made it a point to obtain the P-Bandai version of the Flauros, and obtain it I did. 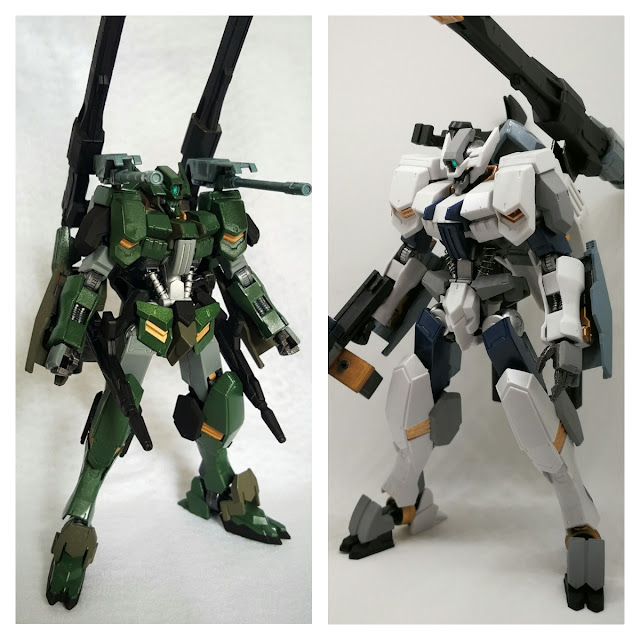 Initially, I contemplated straight building this Flauros since I already did up the regular one last year. However, the stock colours aren't striking enough and in fact a tad plain, comprised of only white, blue and the frame grey. As a machine designed and built to combat monstrous mobile armours that can cast modern-day mobile suits aside with nary a swipe of its massive claws, the Calamity War Flauros also seemed to be a little undergunned with only a pair of shortened rail cannons, curved blades and Flauros machine guns with tiny magazines as main armament.

While browsing my regular network of Gunpla and Gundam related news, I came across a concept art image of the Calamity War Gundam Flauros with a different weapons loadout from the P-Bandai model kit. Instead of two shortened rail cannons, this version of the Flauros was equipped with one of the full-length Galaxy Cannons on left shoulder, with the pair of curved blades mounted on the opposite side. It was also depicted with a fancy shield that never made it into production. Armed with this knowledge, I finally had a vision of my version of the Flauros during the Calamity War.

Although the P-Bandai Flauros model kit contained everything that I needed, it still lacked a handheld weapon as I intended to ditch the Flauros machine guns. A heavy machine gun from Kotobukiya's MSG Weapon Set #40 was chosen as it melded wonderfully with the Flauro's overall look. The colour scheme is based on the Calamity War colours of white and blue, but accentuated with greys and a bunch of other tones:


While the build of this Flauros stayed true to the manual, some areas were given certain embellishments to convey a sense of primal ferocity to the mobile suit. The tips of the V-Fin and the "ears" were trimmed down and sharpened to points, while the backpack's "tail" was shortened as well to streamline the Flauro's look and feel. A pair of gold RG eye stickers were used in place of the provided green ones as I always felt that those looked too large and comical. Of course, my signature pen spring treatment was also applied to the Flauros.

I have to say, this Flauros turned out really well. It could be the colours used but the final product looks immaculately clean and refined. Although some parts can use some Stage-2 masking and colouring, the overall, general look of my second Flauros is sweet, if I do say so myself.

Outfitted with the ostensible objective to go against monstrous Mobile Armours, the rationale behind this version of the Gundam Flauros was simple: to function as an all-range damage dealer.

To achieve this function, the Flauros was equipped with a Type 75 heavy machine gun loaded with sabot rounds applied with a coating of nanolaminate armour. This machine gun was primarily used to quell targets at short range that managed to enter the Flauros' immediate combat field, such as Plumas. The weapon's large box magazine allowed the Flauros to put down a suppression screen of fire to pin down advancing Plumas, allowing friendly forces to move into position.

The Flauros relied on the Dainsleif-derived Large Mass Driver mounted on its left shoulder to shell targets from extreme range, although limited to a flat plain with gentle elevation. Loaded with projectiles shaped like Dainsleif rods, the weapon was able to sever Mobile Armour limbs with a single well placed shot acquired by the main camera on the Flauro's V-Fin. However, the Mass Driver could only fire five shots before requiring a complete reload and each shot had to be spaced three minutes apart for the capacitors to recharge.

In between Mass Driver recharge cycles, the Flauros deployed a pair of low-yield rail cannons that fired from below its arms for mid-range combat. Although these cannons did not have the sheer devastating power of the Large Mass Driver, the weapons were able to be fired in rapid succession and held sizable magazines. Each shaped round was able to completely knock a Pluma out of commission and sustained fire caused significant damage to Mobile Armour plating.

Lastly, the Flauros could wield a pair of curved blades for ultra close combat, stored on a movable mount on the right shoulder. The Flauros had been recorded to jump onto enemy Mobile Armours and knocking out its main camera with a single downward stroke of the curved blade. The high performance of the Gundam Frame along with the output of the twin-linked Ahab Reactors allowed the Flauros to perform delicate and devastating acrobatic attacks. 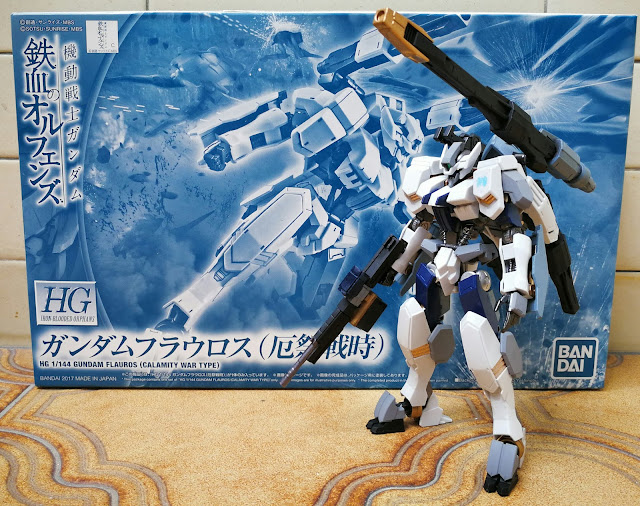 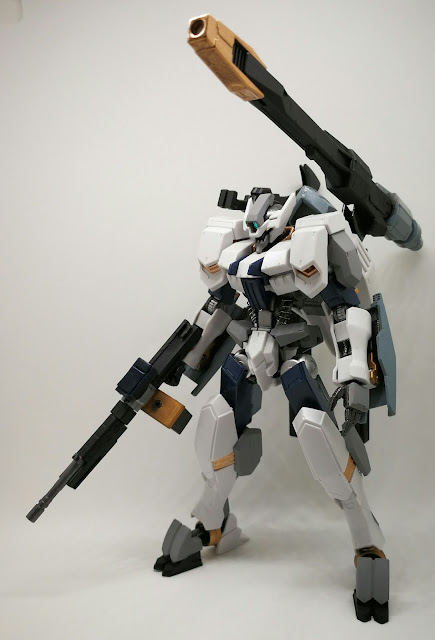 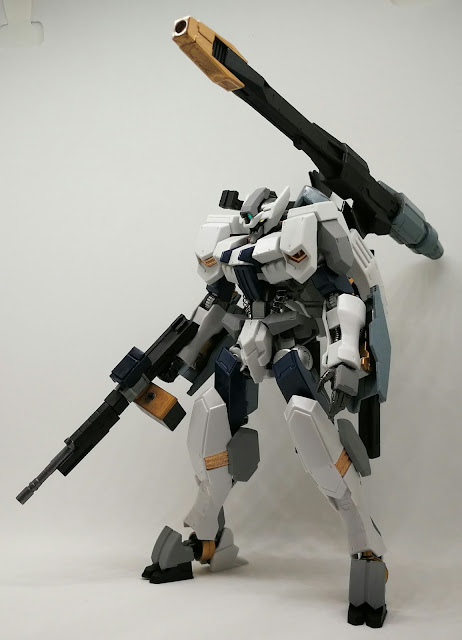 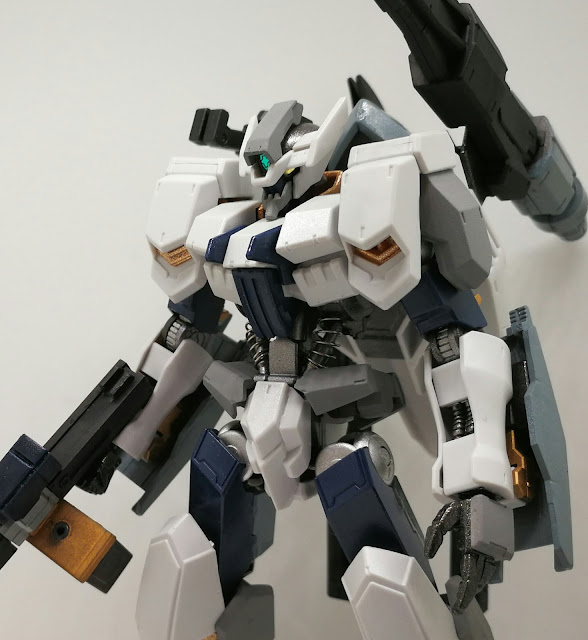 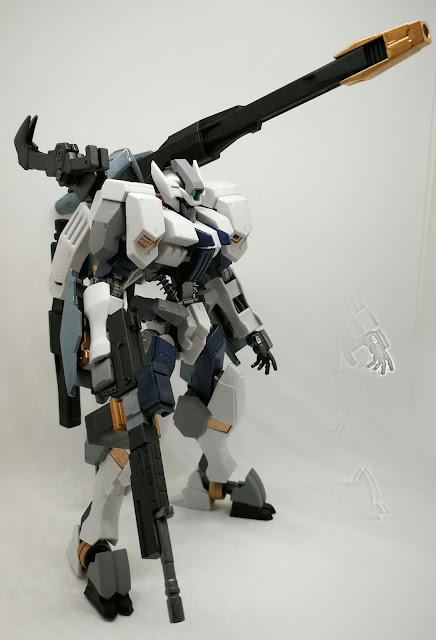 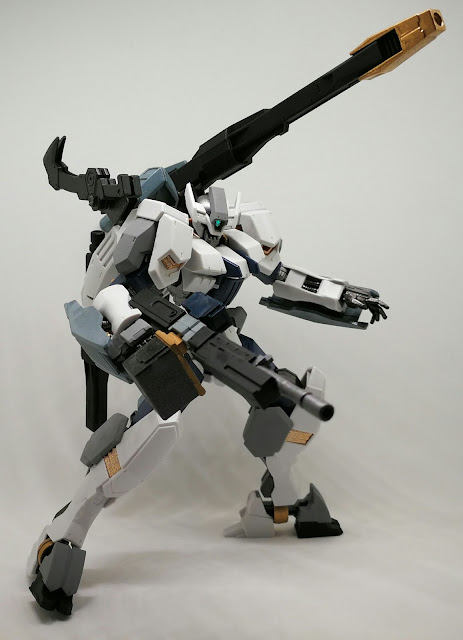 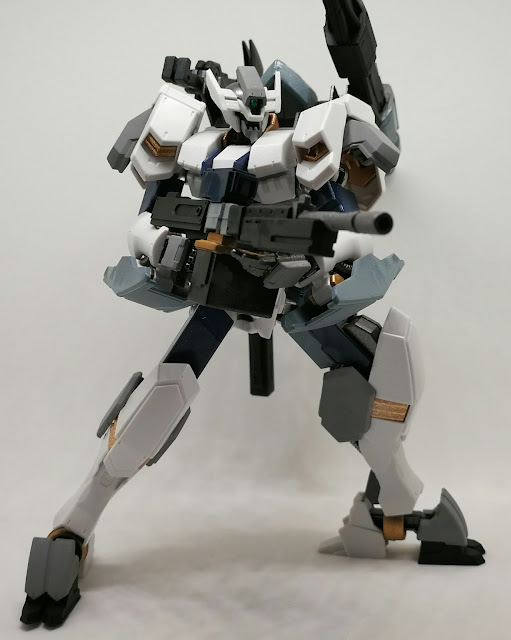 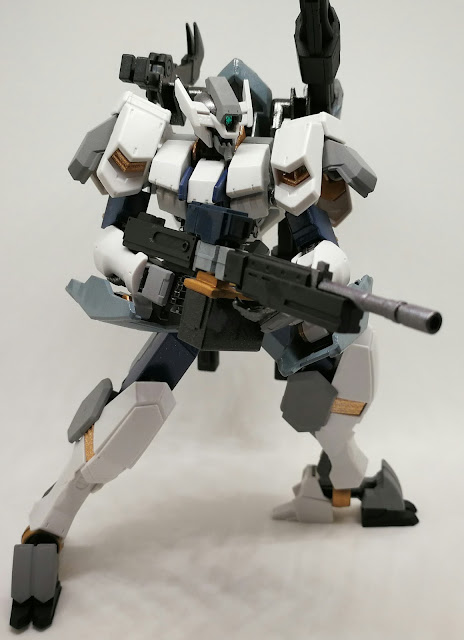 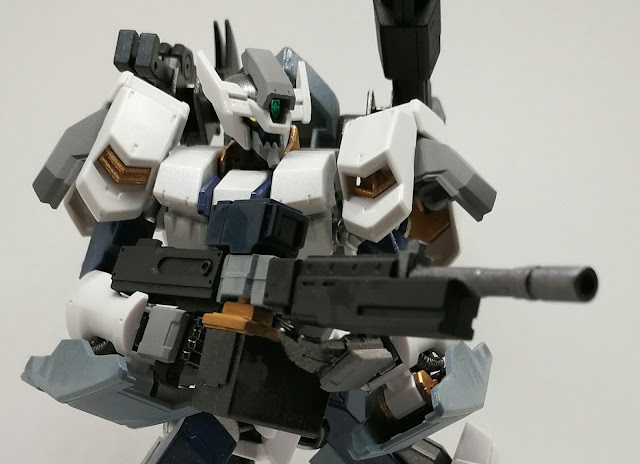 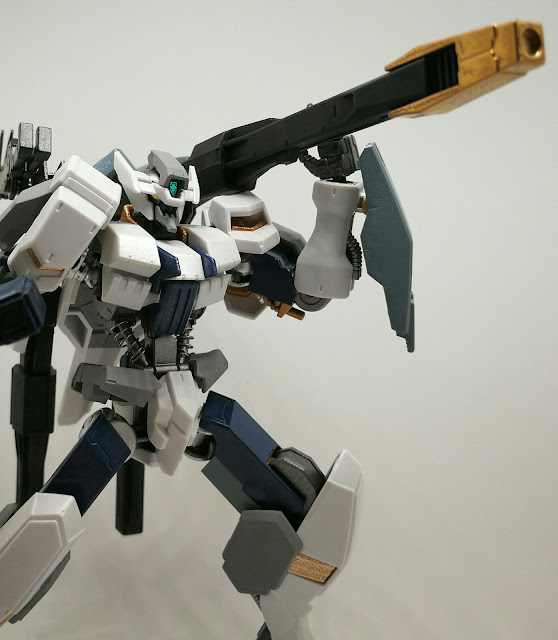 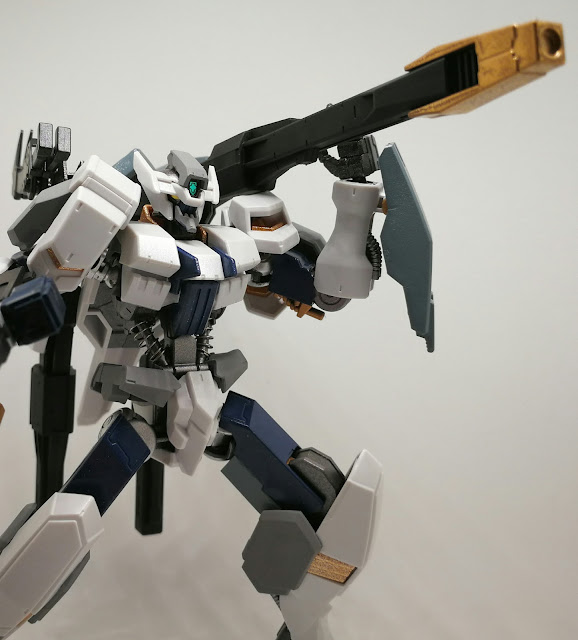 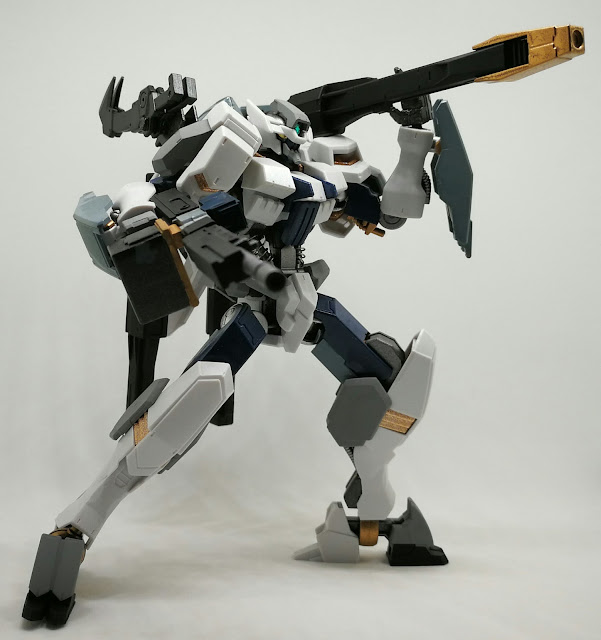 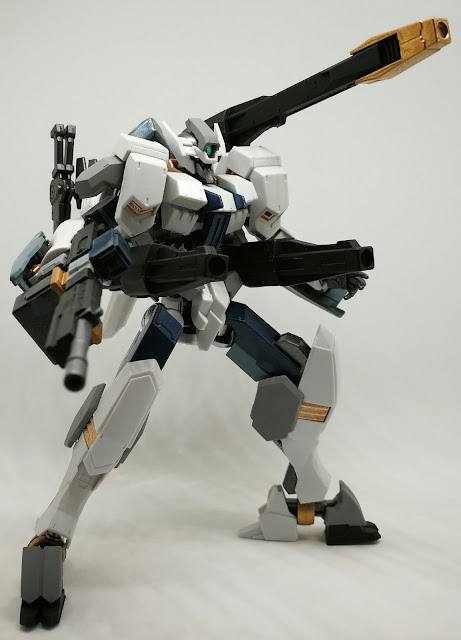 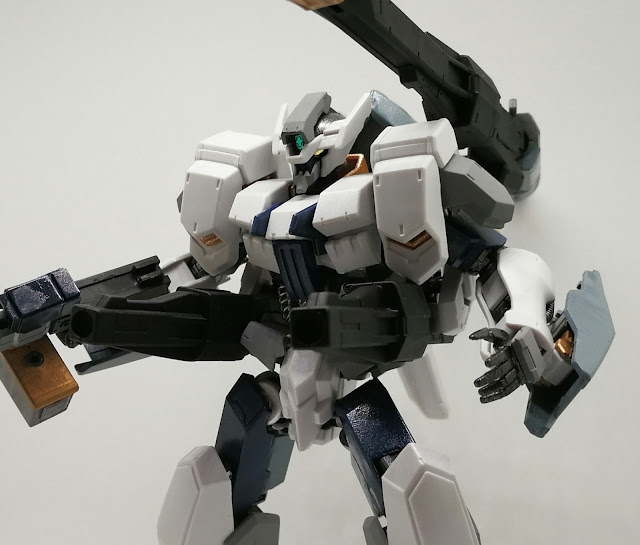 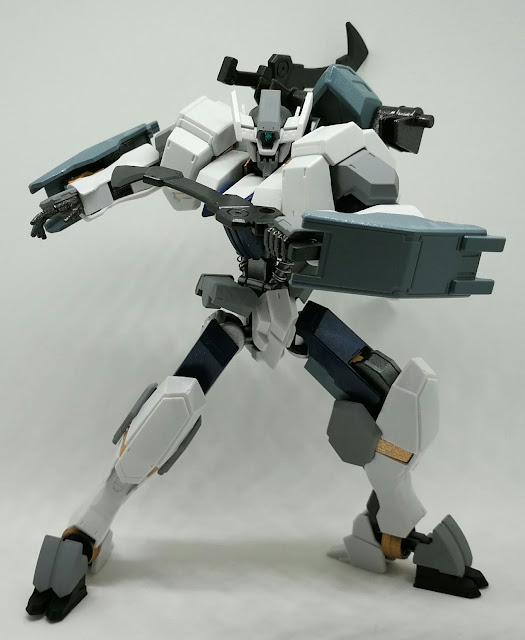 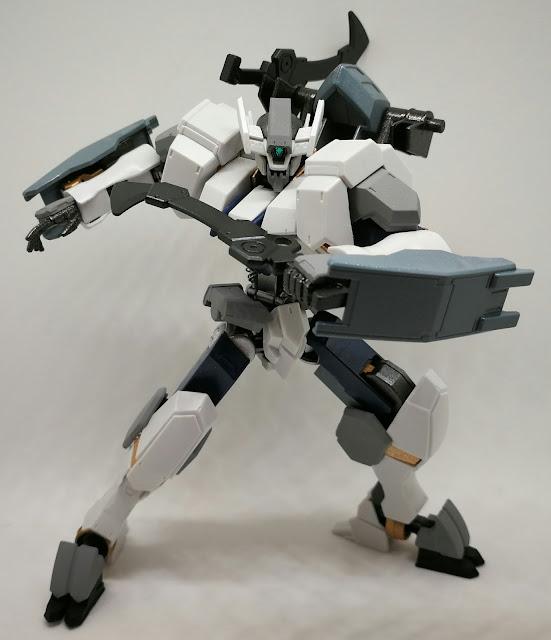 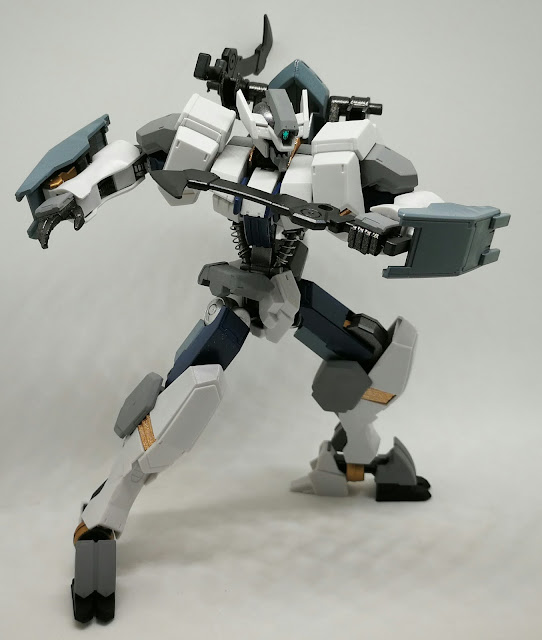 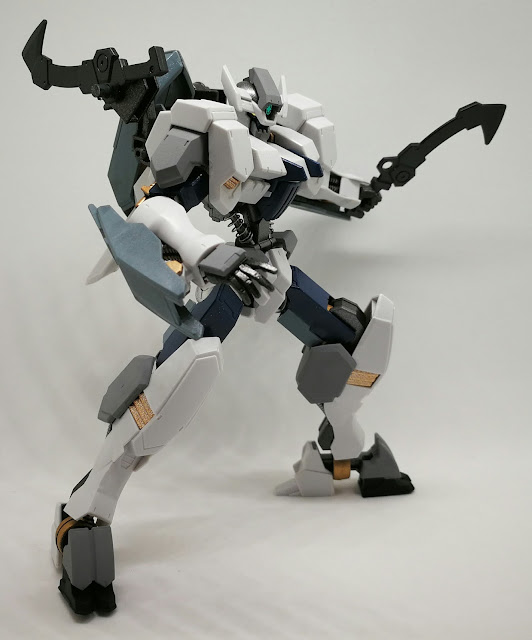 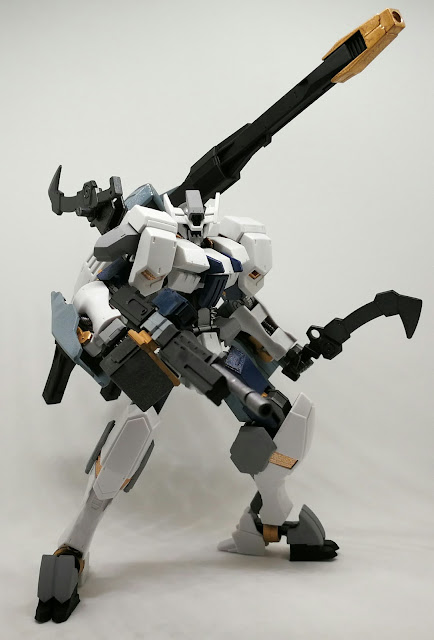 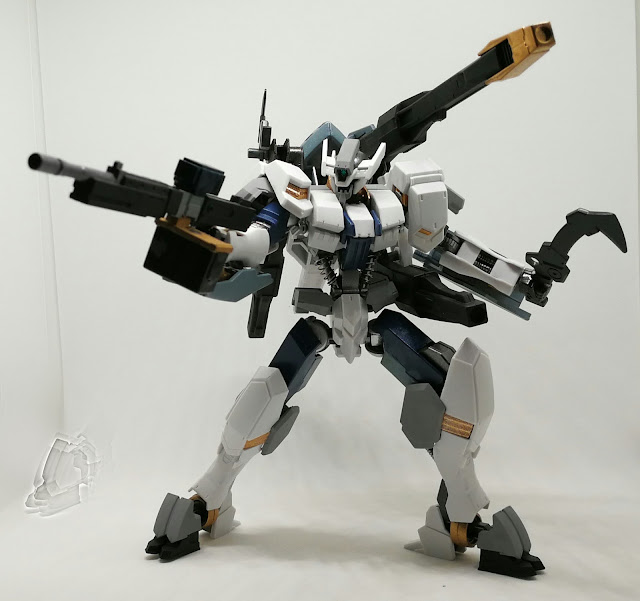 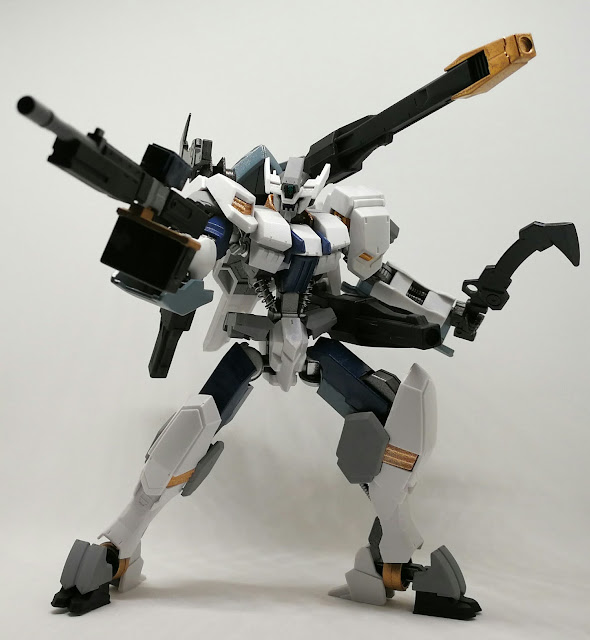 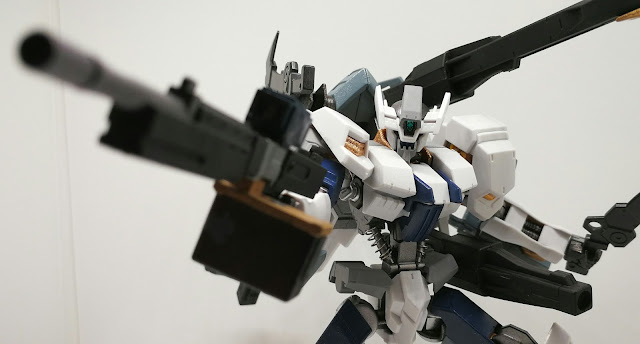 Posted by Gunplanerd at 6:30 PM