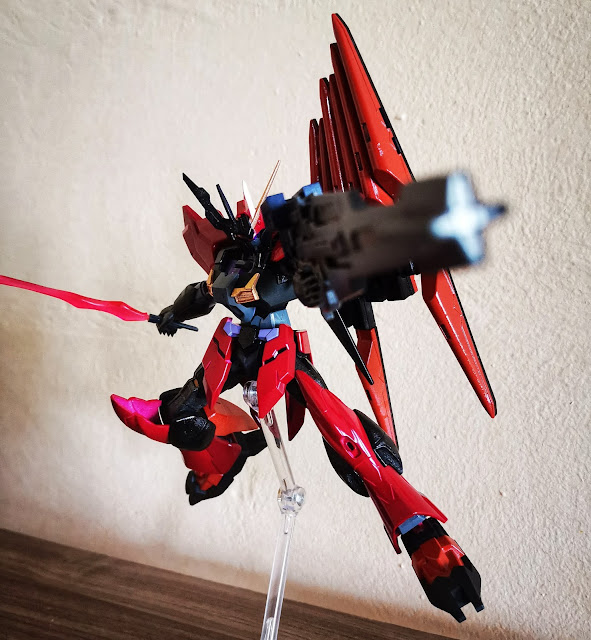 This (Fake) Nu Gundam is not just for show!
With nothing but time and computing power on his hands, Alus ran countless battle simulations between the Eldora Core Gundam (with and without the E3 Armor) against Hiroto Kuga’s Core Gundam and the Planets System. In 1000 simulations, Alus had little trouble overpowering Hiroto with the might of the Eldora Core Gundam. However, Alus failed to account for human ingenuity and adaptability, something that an artificially intelligent construct – no matter how organic its birth may be – will never comprehend. This cost Alus dearly in his encounter with the returned Build Divers, where Hiroto’s new Core Gundam II managed to achieve a Pyrrhic victory against an Alus-controlled Eldora Earthree Gundam using a combination of equipment from two different Planet Systems. To an AI like Alus, such a flagrant breach of binary structures was unheard of and also a little terrifying.

Yet, Alus had no concept of emotion, much less fear. The only emotion he had ever come close to feeling was anger towards the Build Divers, and it was this anger that powered Alus’ search for a new solution to overcome his returned adversaries. Scouring the vast GBN archives for what he viewed as the “Perfect Gundam”, Alus came across numerous iterations of what constituted perfection in many Gundam universes and timelines, but most were too bulky or too equipment-laden for his liking.

It was by chance that Alus came across a recording of an old GBN event that paid homage to a classic Gundam masterpiece: the 1988 epic Char’s Counterattack. While Alus was understandably drawn to the Sazabi, he soon found himself rooting for the RX-93 Nu Gundam, a machine that was created by Amuro Ray to be the ultimate Gundam machine. After witnessing the Nu Gundam defeat the Sazabi in brutal combat and push Axis out of Earth’s orbit, Alus finally made his decision.

Amounting to what was essentially an evil version of the RX-93 Nu Gundam, the AGP-X1/NU Fake Nu Gundam was developed as an Armor Set for the Eldora Core Gundam, designed to be used as high-performance heavy assault combatants where the E3 Armor was not sufficient. Alus customised his own set of Fake Nu Armor in his preferred crimson colour scheme with hand units on his personal machine sharpened to the point that they could be used as no-range weapons to gut enemy Gunpla. Furthering his preference for large ranged weapons, Alus eschewed the RX-93-styled beam rifle for a huge beam cannon. Despite its tremendous size and length, the weapon was designed to be wielded single-handed and thus freeing up the other hand to wield the sole high-powered beam saber. These weapons worked in tandem with the six Fin Funnels mounted to the backpack of the Fake Nu Gundam and with Alus’ near-infinite computing power, gave the Fake Nu the ability to mount lethally-precise all-range attacks.

Alus’ favoured tactic for the Fake Nu Gundam was to release all six Fin Funnels and have them autonomously attack enemy targets. When needed, the Fin Funnels could focus firepower to take down hardier targets such as fortifications or bunkers. The remote weapons could also generate a large beam barrier to block all manner of beam and solid projectiles. Alus’ unthinking logic and cold calculating precision made the Fin Funnels hard to avoid and even harder to shoot down. Unbeknownst to enemy combatants, Alus’ Fin Funnel movements worked towards an even greater goal: herding the myriad enemy forces into a kill-zone for the beam cannon to destroy all of them in one fell swoop.

Once sufficient numbers of enemy units have been funneled into the kill-zone, Alus unleashed the full ferocity of the beam cannon. Unlike the Eldora Earthree Gundam’s large beam rifle that fired a more powerful shot when extra energy was channeled to the weapon, Alus’ Fake Nu Gundam only fired on one setting: maximum power. A glancing hit was enough to rupture enemy armoured vehicles and a full blast instantly vaporised attack vehicles - armour plating, driver, passengers and everything in between. Alus fired the beam cannon with mechanical precision, tracing the weapon to hunt down fleeing survivors with nary a shred of emotion on his digital countenance. Once the dust settled, Alus ignited the beam saber and soared into the kill-zone, finishing off any survivors with one swift stroke.

Alus would deploy his personal Fake Nu Gundam into battle on the moon of Eldora, where the Build Divers were mounting yet another assault on his fortress base. This time however, Alus was worried: Hiroto Kuga managed to reverse-reverse-engineer the Eldora Core Gundam’s docking system after analysing the wrecked machine he had managed to defeat upon the Build Divers’ return. In a cruel twist of fate, Hiroto Kuga now appropriated the machine of his adversary, facing off against Alus’ Fake Nu Gundam with his own Core Nu Gundam. 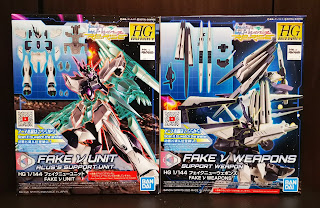 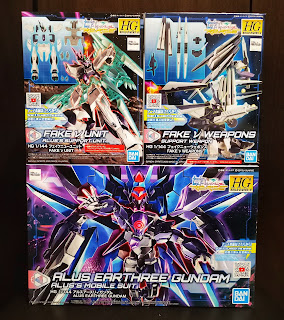 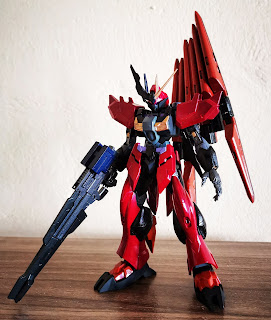 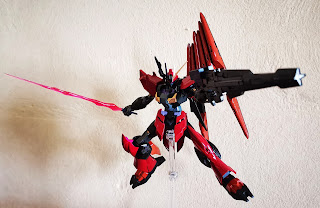 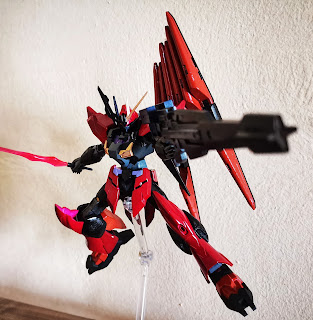 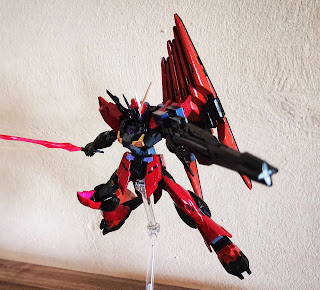 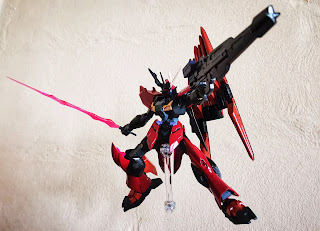 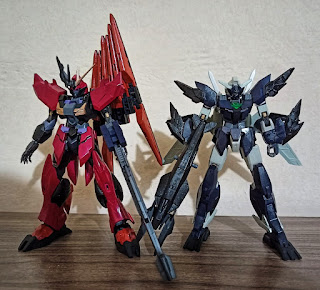 Posted by Gunplanerd at 8:00 PM