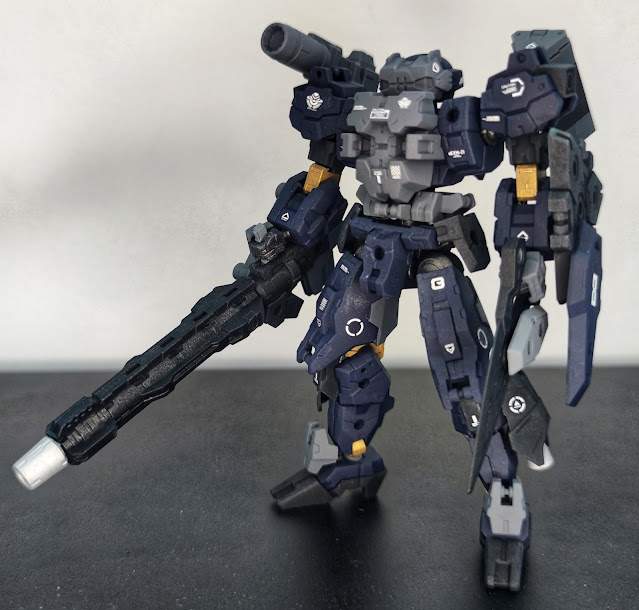 Built like a fortress to defend fortresses.
To defend against and eventually win the war against the Bailon Army, the Earth Alliance was constantly in need of technological innovations that could help turn the tide against the invaders. While the 3rd Generation Alto was now the workhorse of the Earth Alliance forces, it was proving to be increasingly inadequate against the more specialised versions of the Portanova, especially if they were led by Cielnova units. The Earth Alliance needed a game-changer and needed it fast.
The 4th Generation Rabiot was intended to be fielded with Alto units, fulfilling a role similar to standard Cielnovas. Assigned to squad leaders and combat veterans, the Rabiot was essentially an Alto with thicker armour, higher thruster output and all-round higher specs with its own cavernous arsenal of equipment and armaments. Yet, Earth Alliance top brass did not approve for the Rabiot's widespread deployment, fearing capture and reverse-engineering by the Bailon Army although actual combat results had proved largely favourable with a 5:1 victory record (the loss was due to friendly fire). The Rabiot was therefore relegated to mundane assignments such as base construction, tactical reconnaissance and base defence.
Base Defence Rabiot units were typically upgraded to the Heavy variant in order to accommodate the veritable mountain of equipment it was meant to carry. Paired with a Type-6 Long-Range Sentry Roy-Roy outfitted with a Type-32 Medium Railgun, Base Defence Heavy Rabiots were also equipped with a large beam bazooka, a beam smart gun mounted on a backpack armature, a mini-MLRS, a shield and a vibration blade. Heavy Rabiots also sported the thickest class of chest armour and an armoured head unit which completely concealed with standard-issue compound sensor. The head unit also allowed for a more stable and secured uplink with the Sentry Roy-Roy and optional Ground Recon Roy-Roy used to paint targets.
The EXAMAC production facility at J-City was constantly under attack by Bailon forces, which necessitated the deployment of a number of Rabiots to shore up defenses before the next attack. This eventually came in the form of a brigade-sized attack force, led up no fewer than three land battleships. While Altos in their many configurations did battle with Portanovas in equally diverse specifications, a sole Heavy Rabiot stood its ground in Sector 8. Piloted by a veteran who earned his wings in the battle of K-City, the EXAMAC was able to systematically pick off each and every enemy unit which came his way. The Long-Range Sentry Roy-Roy, with data from the Ground Recon Roy-Roy, was able to singlehandedly obliterate an entire platoon of regular Portanovas, who did not know what had hit them even in their last moments. The mini-MLRS was also useful in scattering enemy forces for easy picking with the beam bazooka, with the latter vaporizing a number of enemy EXAMACs at close range. The arm brace that connected the beam bazooka directly to the right arm of the Heavy Rabiot allowed for near-recoilless rapid firing, giving the impression that a whole battalion of Altos was defending Sector 8 and not just a single machine. The Heavy Rabiot even managed to take down an elusive Portanova Commander Type with a combined fusillade from the beam bazooka and beam smart gun, although the wounded machine managed to limp to safety under the cover of Bailon reinforcements.
The Heavy Rabiot spun to the left as a warning went off in the pilot's console - a single enemy unit had entered Sector 8. Pushing the Heavy Rabiot's enhanced sensors to the maximum, the pilot made out the distinctive visage of a Cielnova Officer Unit that was curiously equipped with equipment not found on recorded Cielnovas. It also had a extremely glaring green-red colour scheme which made the machine stick out like a sore thumb in the sea of J-City's drab grey buildings. The pilot dropped a command to the Type-6 Roy-Roy while he began to focus his attention on other pressing concerns, such as dinner options.
The Roy-Roy beeped an alert: it had missed the target. The pilot was surprised. Not much could avoid the hypersonic velocities of a depleted uranium railgun slug, let alone this big, bulky and gaudy-looking Cielnova. He readied another shot for the Roy-Roy while also putting in the command for a targeted firing solution - once this machine crosses the virtual marker on his combat display, it will be scrap metal. The Roy-Roy's six spindly legs dug into the roof of the building it was perched on as the railgun round left the barrel in a flash of azure. The Heavy Rabiot's pilot waited for the telltale spray of sparks that signalled a direct hit, but was instead greeted with a plume of thick grey dust as the railgun round killed a building but not the Cielnova. In fact, the enemy EXAMAC was now making a beeline towards his position, which was fine and dandy as the firing solution to end the threat was ready to be activated.
The pilot could not have expected what came next.
Just as the Cielnova was about the cross the digital marker which would have triggered the firing solution, the green-red machine dropped to one knee and fired off a blast from its backpack mounted weapon system. The pilot thought he was done for as the bolt soared towards him and ultimately impacted the building just meters away. At the same time, his console blared a warning: the Type-6 Long-Range Roy-Roy was offline. The Cielnova had taken out his long-distance killer and was now zigzagging through J-City's buildings to get to him. The Heavy Rabiot barely managed to raise its shield as the armor-shredding claws made contact, leaving deep lacerations on the protective equipment. While not a fan of close combat, the pilot had little choice but to ready his Heavy Rabiot for a melee. But before he or his green-red adversary could make a move, the skies opened with a yellow portal and slender EXAMACs gracefully poured forth before commencing indiscriminate slaughter.
The Maxion had arrived.
Gallery 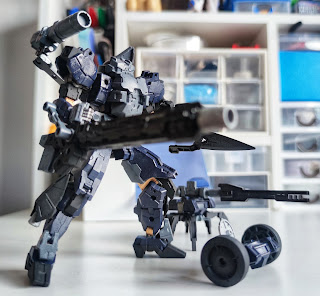 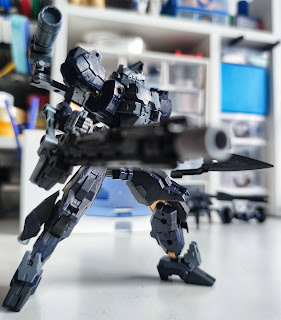 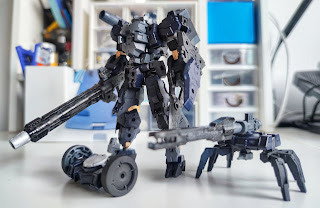 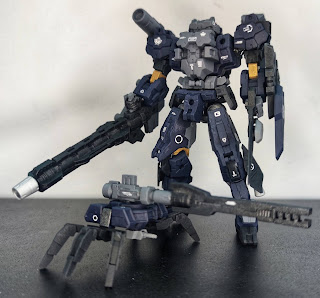 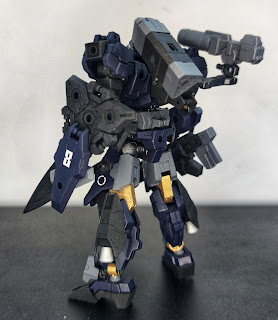 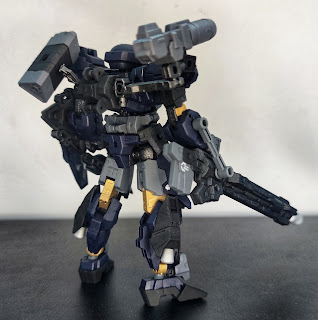 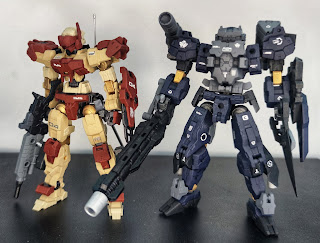 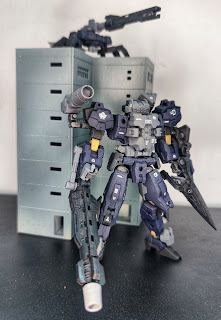 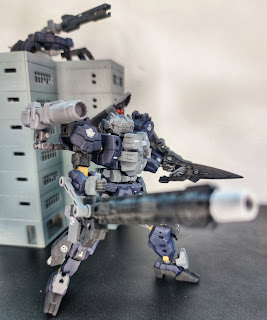 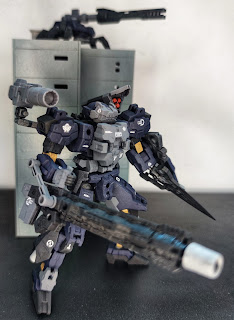 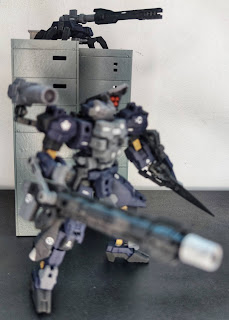 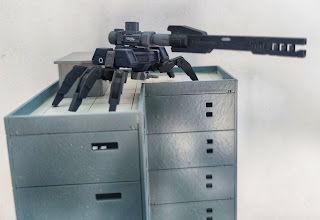 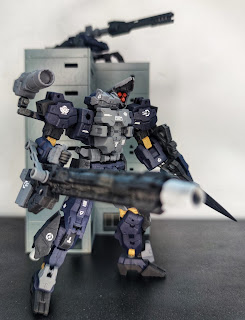 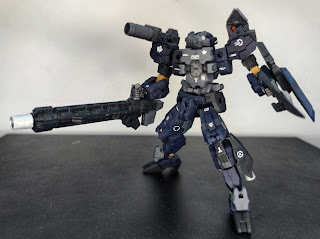 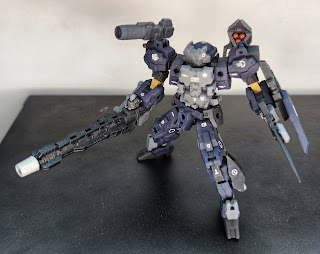 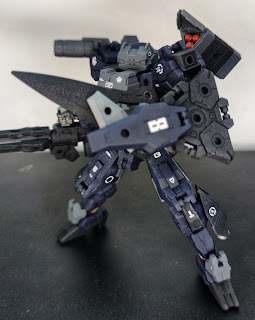 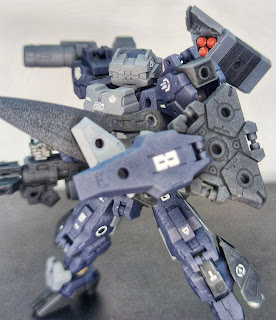 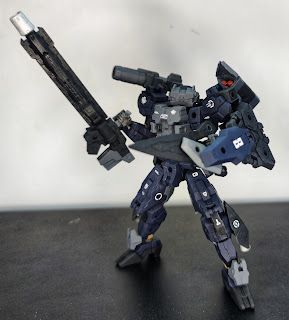 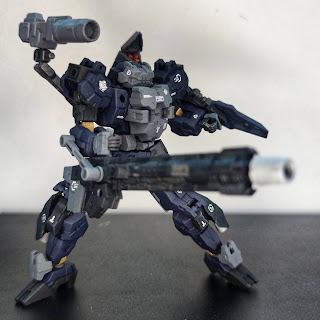 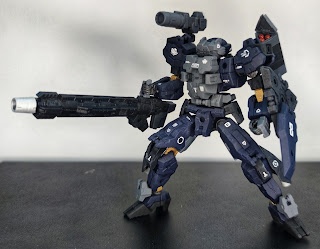 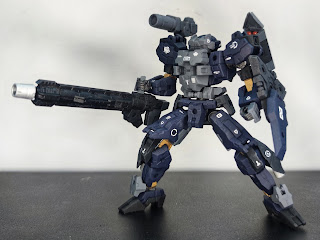 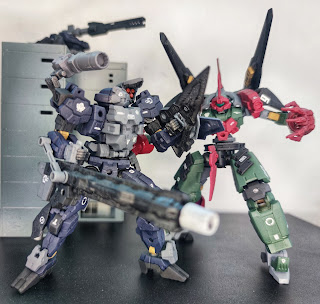 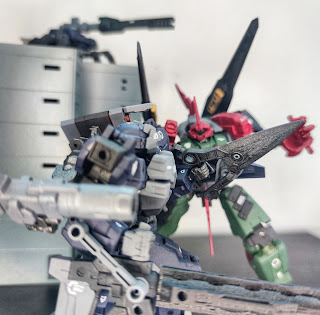 Posted by Gunplanerd at 1:31 AM